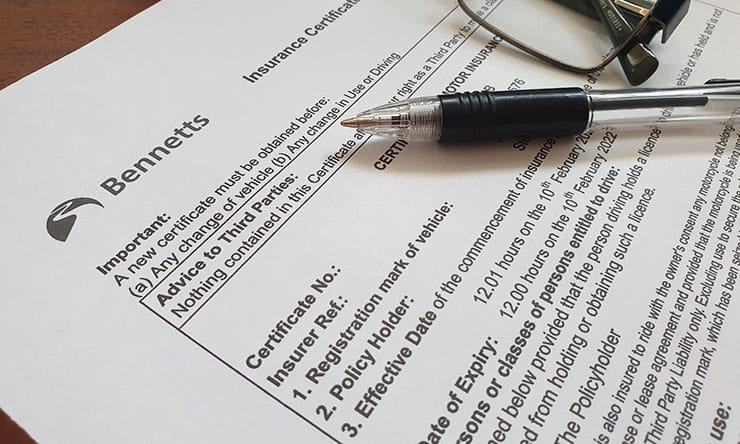 While the pandemic still means that European riding trips are still something of a pipe dream for most of us at the moment there’s good news from the EU, which has decided to waive the need for UK drivers and riders to carry ‘Green Cards’ as proof of vehicle insurance.

The UK’s departure from the European Union has meant that since 1st January this year, anyone taking their vehicle into an EU country from the UK has needed to be able to produce a Green Card to prove they have valid insurance in place. While the massively reduced holiday travel means it’s an issue that’s impacted far fewer people during the pandemic than it would under normal circumstances, it’s been a particular issue at the UK’s only EU land border, between Northern Ireland and the Republic of Ireland.

Now, under a package of measures to reduce frictions in the implementation of the Northern Ireland Protocol, which covers the particular problems that Brexit has brought to the Republic of Ireland and Northern Ireland, the EU has announced a decision to waive the requirement for UK drivers to show Green Cards in the EU.

While the rule change isn’t immediate, it’s expected to be included in the official journal of the EU within the next few days and then come into effect 20 days after that. In the meantime, Green Cards are still needed for UK travellers driving in the EU.

The decision has been largely driven by lobbying from the Motor Insurance Bureau of Ireland, which has been working to allow for smoother travel between the Republic and Northern Ireland. Prior to Brexit, MIBI reached a deal with the UK DfT to accept valid Irish insurance discs as proof of insurance in the UK, so no Green Card has been needed for Irish drivers entering the UK.

The European Commission said on Wednesday: “The Commission has today announced a decision to waive the obligation to show the motor insurance Green Card for drivers from the UK. This will be particularly helpful for Northern Irish motorists crossing the border into Ireland.”

Under the planned change, the UK will be admitted to the EU’s Green Card Free Circulation Zone under the EU Motor Insurance Directive, although the exact date for the new rules’ implementation has yet to be confirmed.

David Fitzgerald, Chief Executive of the MIBI, said: “We strongly welcome confirmation from the European Commission that the UK will be admitted into the Green Card Free Circulation Zone. Since the ramifications of Brexit on the issue of Green Cards became clear, the MIBI has been maintaining an ongoing dialogue with the European Commission to highlight the potential problems this could have caused, particularly across the island of Ireland.”

Huw Evans, the Director General at the Association of British Insurers, said: “This is excellent news. We have long campaigned for the UK to be part of the Green Card Free Circulation Zone so we warmly welcome the decision by the European Commission. The Commission has taken a pragmatic approach on the matter.  UK drivers will no longer need to apply for a green card through their insurer which will help reduce bureaucracy for drivers and road hauliers travelling between the UK and EU. It will be especially welcomed by motorists in Northern Ireland driving across the border to the Republic of Ireland.”

If you are travelling to the EU, including the Republic of Ireland, in the next few weeks, a Green Card is still needed, but once a date for the exemption is decided we’ll let you know.