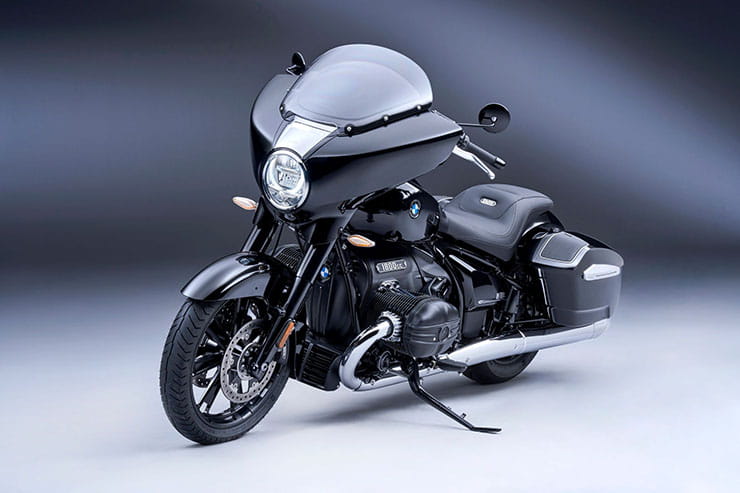 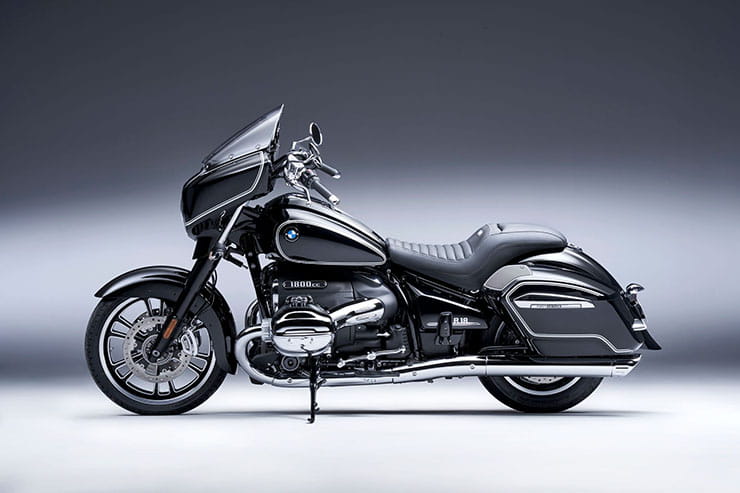 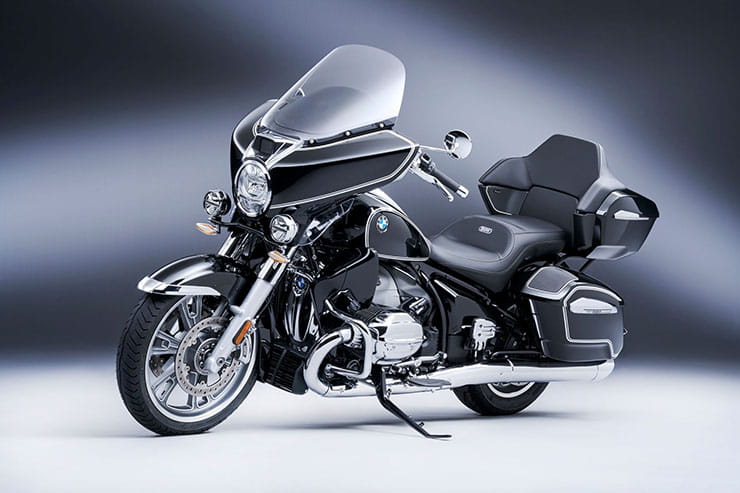 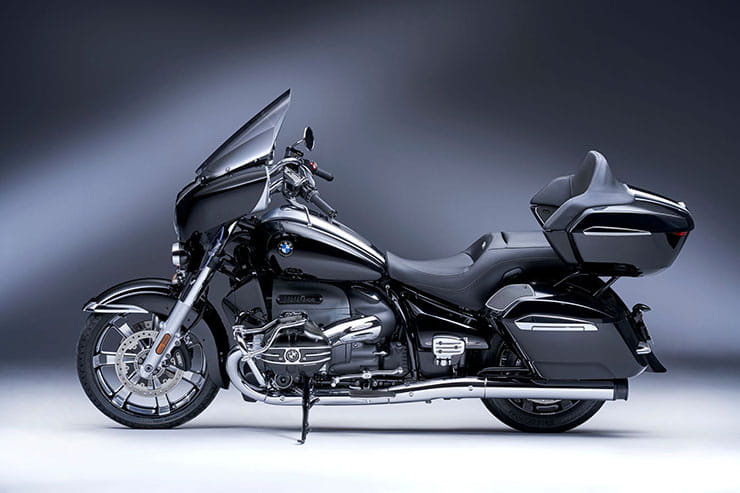 It was way back in March last year – before the BMW R18 had even been officially launched – that we first published pictures of the part-faired bagger version that was set to join it. Now that machine – the R18B – has been launched along with the even larger Transcontinental touring model.

As shown in the original patent images early last year, the R18B features a substantial bar-mounted fairing that incorporates a comprehensive instrument pack including four analogue dials – speed, revs, fuel and an unusual ‘power reserve’ instrument borrowed from Rolls-Royce, showing how much of the engine’s potential is being used at any time. There’s also a vast 10.25in TFT screen below those, with navigation and all the media control and bike setup menus you could imagine.

Behind that comes a redesigned fuel tank, with a whopping 24-litre capacity and a built-in smartphone storage cubby, leading to a low seat flanked by a pair of 27-litre panniers. On the Transcontinental, there’s a taller screen at the front and the rear is dominated by a 48-litre top box that incorporates a backrest for the seat. 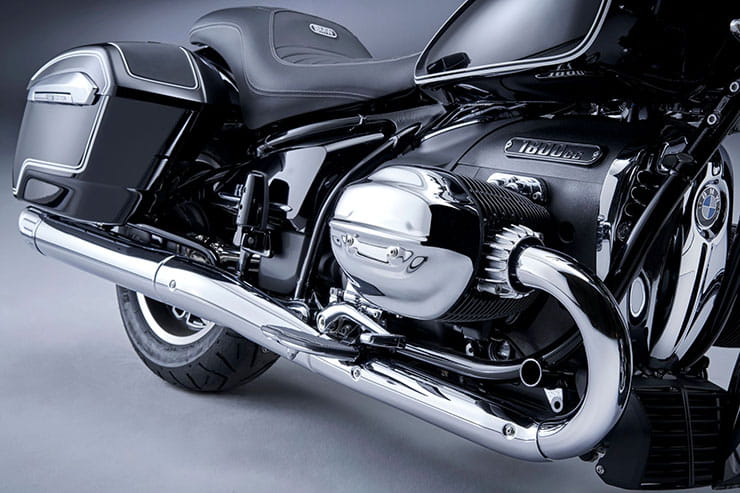 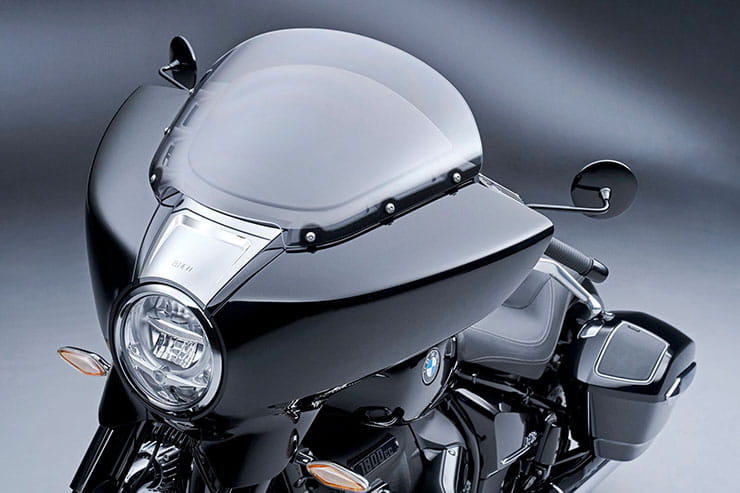 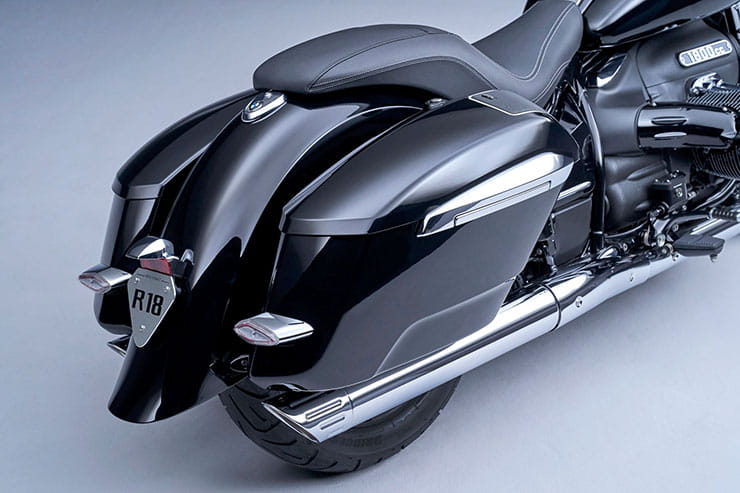 The huge 1802cc air-cooled boxer engine is the same as the other R18 models, making 91hp and 158Nm of torque, although as we revealed recently, BMW has also type-approved detuned 47hp versions of bikes to fit into the A2 licence class. There’s no official word on those models yet, though.

The suspension of the new models is intriguing, as it dispenses with any form of conventional adjustment, or even electronic adjustment options. Instead, the monoshock rear end has travel-dependent damping and automatic load compensation, so preload is automatically altered via a servo-operated hydraulic system depending on the information from a height sensor, keeping the rear at a pre-determined static height regardless of luggage load or the weight of the rider or pillion.

There’s ABS for the brakes, of course, and the front and rear are linked with automatic brake force distribution depending on the load on each wheel. 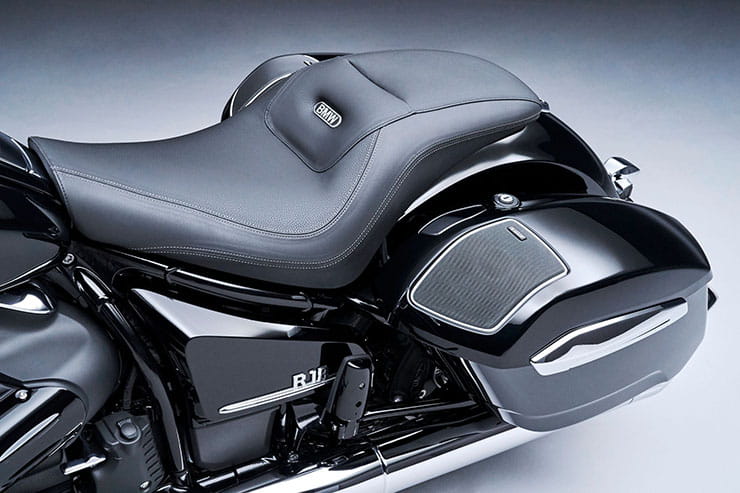 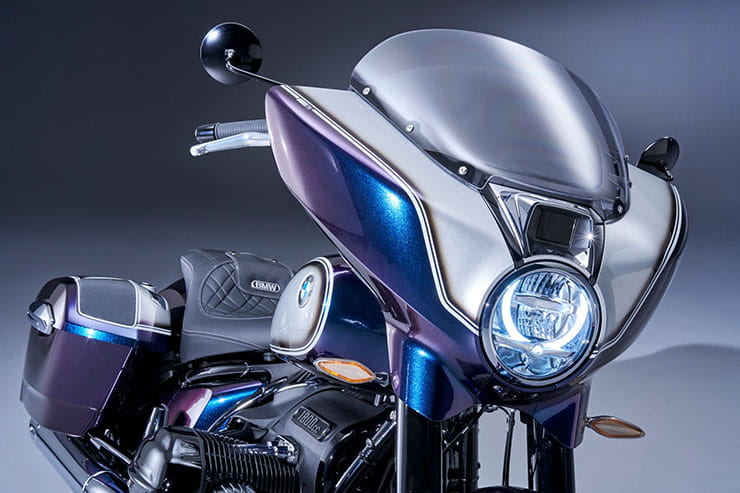 On the higher-spec, touring oriented Transcontinental, a heated seat is standard, while the R18B’s seat is narrower and shorter.

When it comes to technology, both models get cruise control as standard but there’s also the option of BMW’s Bosch-developed Active Cruise Control, with a rather wart-like radar sensor fitted into a chrome mounting plate above the headlight. As on the R1250RT, which is also available with the system, the radar allows the bike to maintain a constant distance from vehicles ahead, accelerating and decelerating automatically with the flow of traffic. Even the standard ‘Dynamic’ cruise control is clever enough to apply the brakes if you’re running downhill, with gravity bringing your speed above the selected setting, and ACC uses both throttle and brakes as well, although BMW warns that the system doesn’t recognise stationary vehicles, so if you’re approaching the back of a traffic jam you need to apply the anchors yourself. 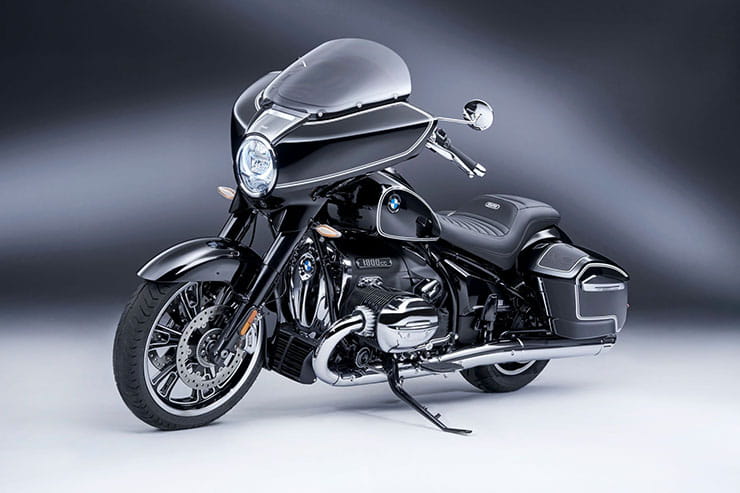 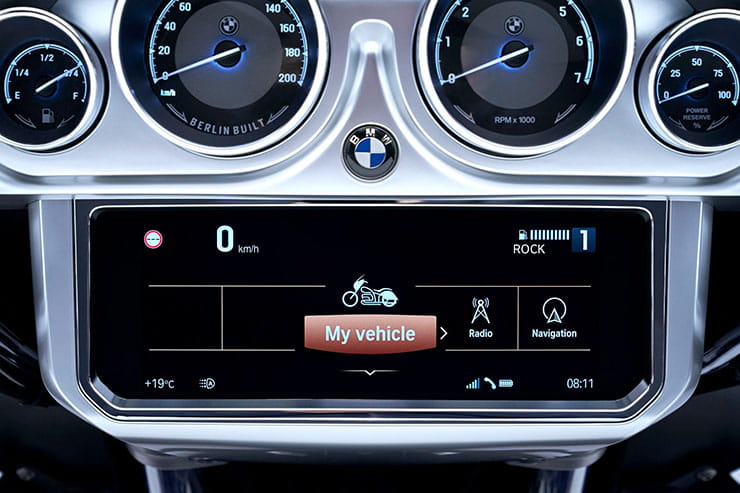 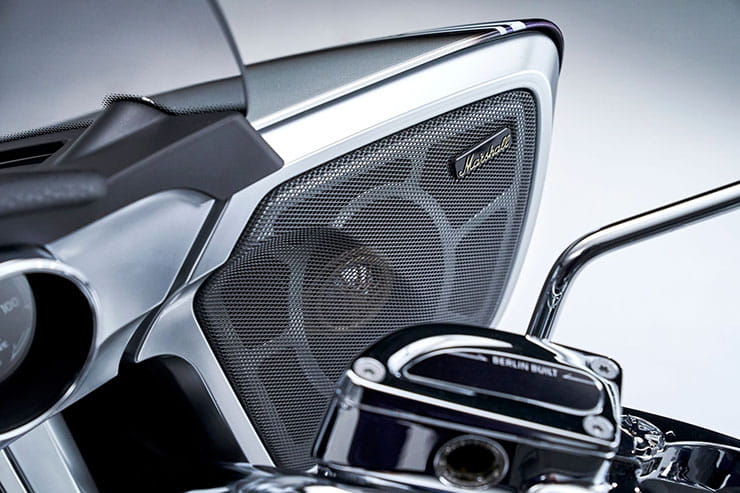 The clever tech continues with the optional cornering headlights, which swivel to alter the beam as you corner rather than using the more traditional technology of turning additional lights on or off when the bike leans.

You get keyless ignition, of course, which also locks and unlocks the steering, while the luggage can be remotely locked via a button on the fob. As on the other R18 models, there are three riding modes – cringingly called ‘Rain’, ‘Rock’ and ‘Roll’ instead of the more comprehendible ‘sport’ or ‘touring’ – altering the stability control, throttle response and engine braking effect. An electric reverse assist helps with parking, using the starter motor to trundle the bikes backwards at the touch of a button.

There’s a built-in Marshall stereo system, including DAB and DAB+ radio as well as FM and the ability to pipe sound into your headset or via the bike’s two 25 watt speakers. ‘Gold Series Stage 1’ and ‘Stage 2’ versions add parts like a sub-woofer and Marshall Gold Series speakers (two in Stage 1, six in the Stage 2 setup). 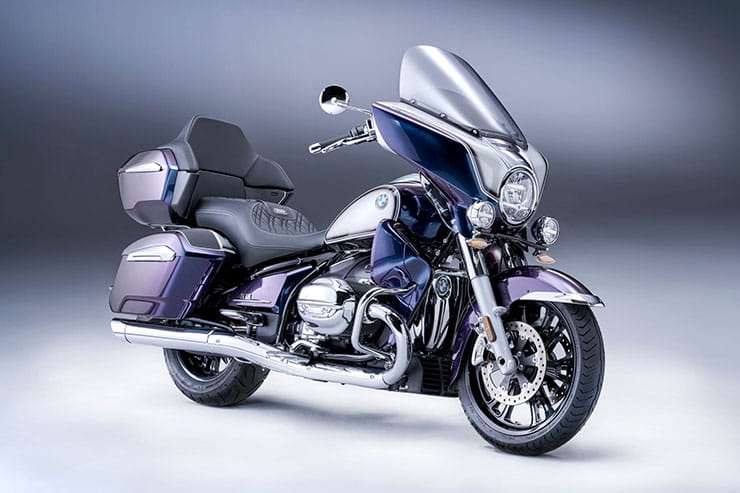 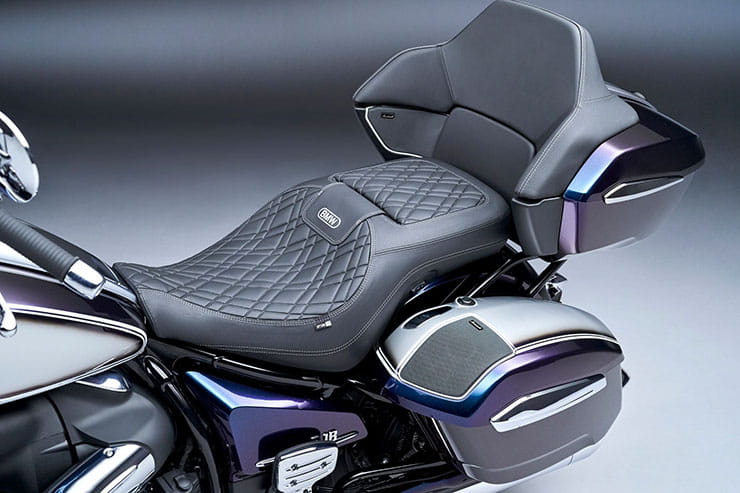 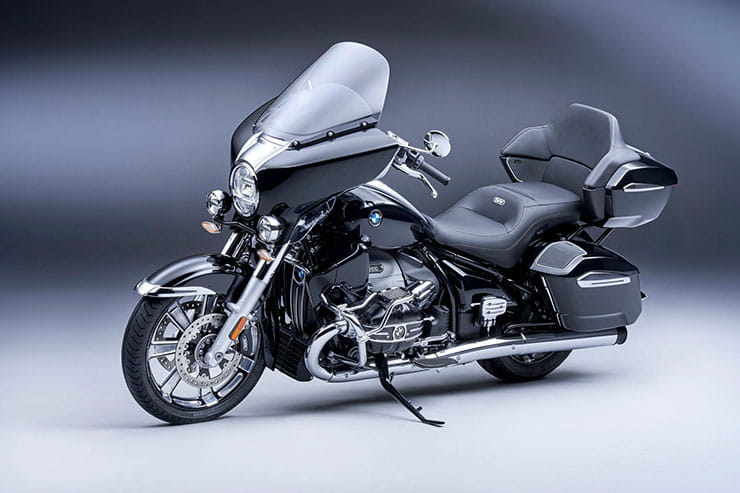 Initially, the R18B and Transcontinental will be offered as ‘First Edition’ versions, with upgraded paintwork and additional chrome. You also get a ‘welcome box’ with historic tank emblems and slotted screws and even a pair of work gloves to wear as you install them, as well as a key ring screwdriver, an R18 First Edition cap and belt buckle and a book about BMW’s history.

On top of all that, there’s a vast options list with bolt-on parts, including an ‘Option 719 Aero’ package, an ‘Option 719’ seat and a special ‘Option 719’ paint scheme with flip paintwork that changes from blue to purple depending on lighting and angle, with silver highlights.

The R18B starts at £21,500 and the Transcontinental will cost from £23,300, although most buyers will probably opt for plenty of options, hiking those numbers up. 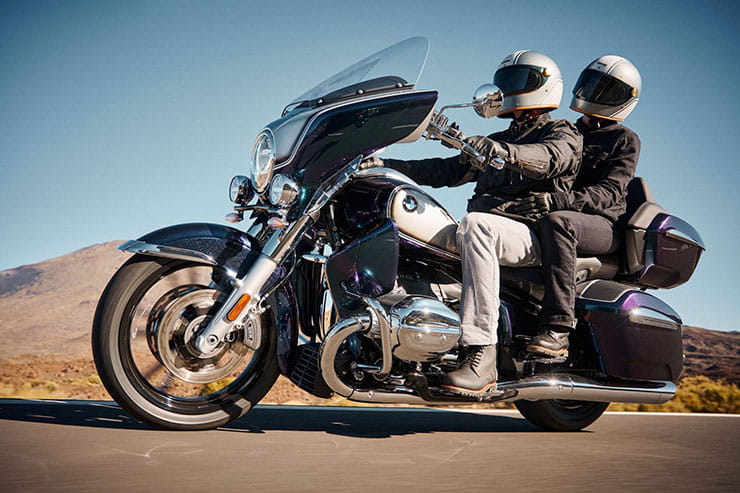 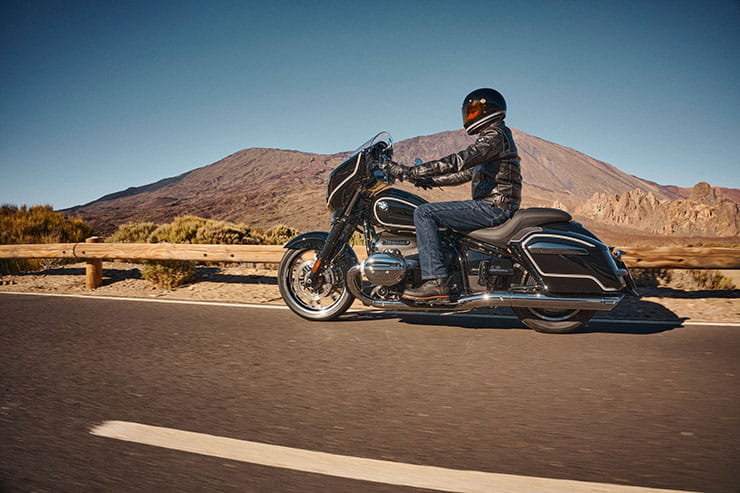 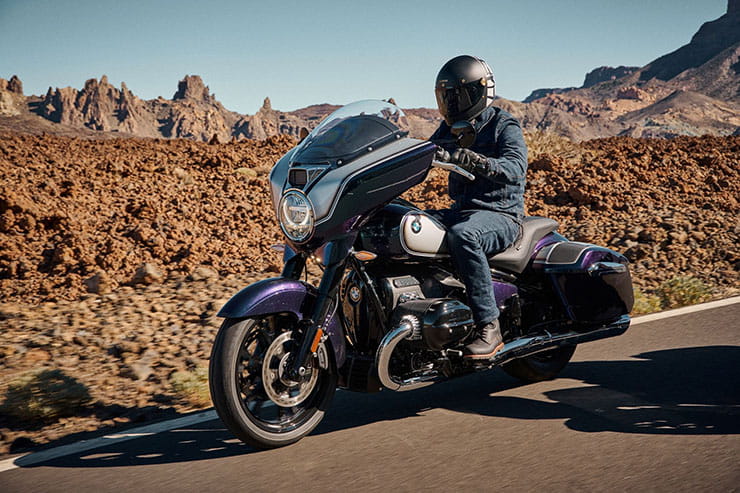