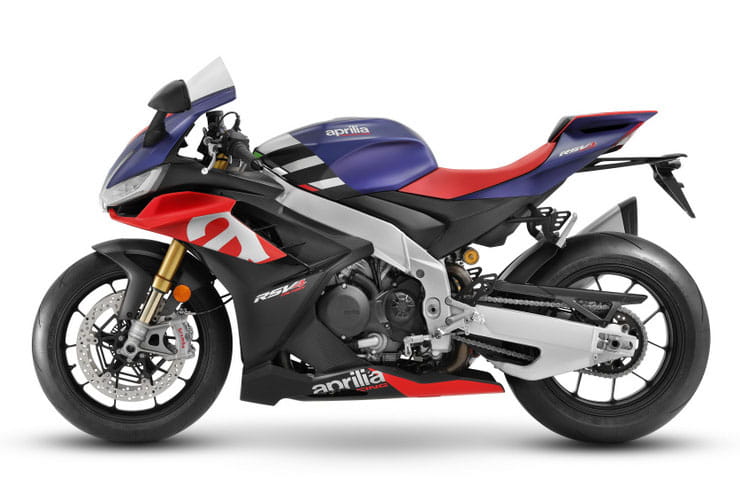 It’s been more than a dozen years since Aprilia adopted V4 power for its flagship superbike and 2021 sees the RSV4 get the biggest update in its life including a bigger engine and reworked chassis along with completely reworked styling that apes the smaller RS660.

Between them the updates promise better aerodynamics, more torque, improved handling and less weight, a recipe that could once again see the RSV4 rivalling the best superbikes from Japanese and European rivals.

Starting with the engine, like everyone else Aprilia has been forced to comply with Euro 5 emissions rules this year, and to achieve them without a loss in performance the bike’s V4 gets a capacity hike from 1077cc to 1099cc. At the moment, the firm hasn’t given details on whether a larger bore or longer stroke has been used, but it’s likely to be the latter, since the firm claims an unspecified boost in torque and says the peak power of 217hp is unchanged (that’s 214hp using the slightly brawnier imperial horses that are the usual British yardstick). Revamped electronics based around a more powerful Marelli ECU and six-axis IMU mean there are now six riding modes – three track, three road – half of which are customisable for even more granular settings, and adjustable engine braking control has been added to the already sophisticated suite of electronics. 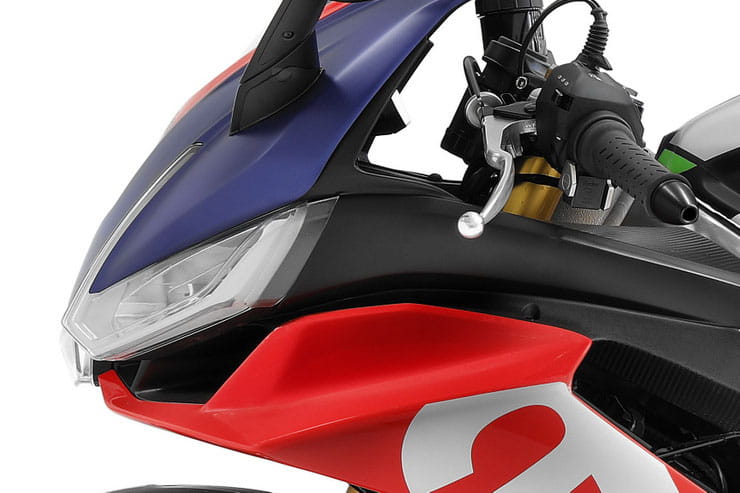 Feedback from all that tech is given to the rider via a new TFT instrument pack, larger than before, and you’ll be able to peruse it in greater comfort thanks to reworked ergonomics. The seat is new, as is the fuel tank, which is sculpted to give a more relaxed riding position than before.

While the bike’s profile is generally similar to its predecessor – at the moment Aprilia has only released a single side-on image of the 2021 machine – the fairing is completely new. Even from the side we can see the new headlights, which are seemingly near-identical to the units used on the smaller RS660, complete with strakes rising up into the nose fairing. They’re full LED units and feature cornering lights that illuminate the inside of turns based on lean angle information from the IMU.

While the previous iteration of RSV4 was among the first road-going superbikes to adopt MotoGP-style winglets (at least in high-spec ‘Factory’ form) in 2019, the new model bins the ugly, tacked-on wings in favour of a more sophisticated double-layered fairing, with hidden aerodynamic surfaces between the inner and outer surfaces to create downforce. It’s the same idea used on the RS660 and Tuono 660. Aprilia also claims the redesigned fairing increases the ram-air effect in the airbox to boost power at high speed, and that it directs hot air from the radiators away from the rider. 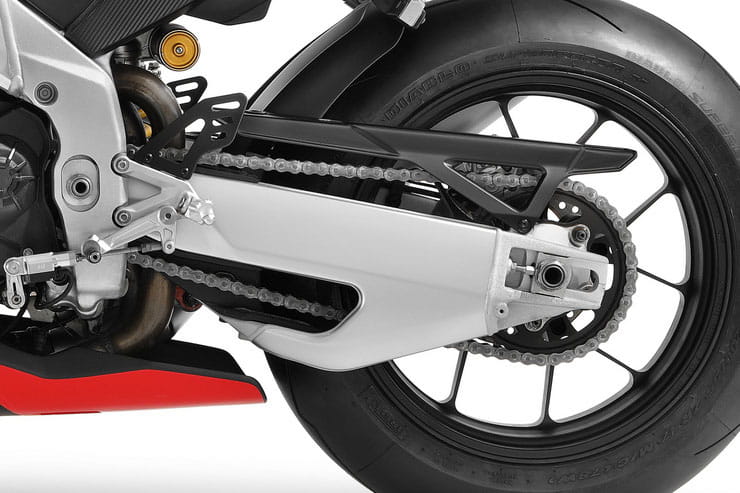 The chassis is the same aluminium beam frame that’s been used since the start of the RSV4’s life, but the swingarm has been replaced with a completely new design for 2021.

In line with favoured MotoGP and WSBK practice, it now has underslung bracing that’s made possible in part by a new exhaust system. Aprilia says the new arm is lighter than the old one, helpfully cutting un-sprung mass, although the firm has yet to reveal precise figures for the bike’s overall weight.

The new swingarm is claimed to improve stability under hard acceleration, perhaps suggesting that the bike’s wheelbase might have been increased a fraction. Again, detailed specs are still in the post.

As before, two versions of the RSV4 will be on offer. The base version, simply called the RSV4 and only available in a ‘Dark Losail’ colour scheme, has the same performance as the higher-spec RSV4 Factory seen here, but has cast instead of forged alloy wheels and lacks the semi-active Öhlins Smart EC 2.0 suspension that’s standard on the Factory. 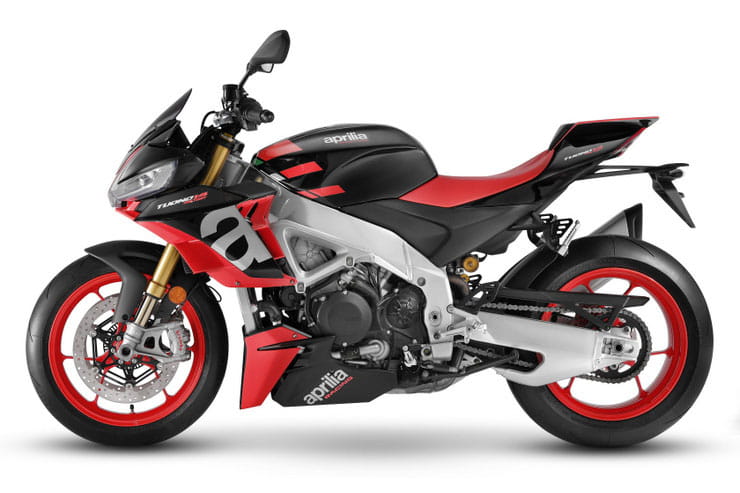 Given that it’s based around the same building blocks, it makes sense that Aprilia has also revamped the Tuono V4 for 2021.

Like the RSV4, the 2021 Tuono V4 gets a Euro 5-compliant engine, but it lacks the extra cubic centimetres, instead sticking to the same 1077cc of the old model. Power is unchanged from its predecessor at 175hp, allied to 89lbft of torque, but the Tuono also gets the new exhaust and the updated Marelli ECU of the RSV4. That means it also gets six riding modes and new engine braking control, just like the superbike.

With the same bodywork, apart from the front fairing, as the RSV4, the 2021 Tuono V4 gets the same improved riding position courtesy of a new seat and tank design, but of course allies that to much taller, wider bars to suit its streetfighter style.

The nose shares the same RS660-esque headlights, complete with cornering lights, as the new RSV4, mounted in a top fairing that’s claimed to give more wind protection than its predecessor to add to rider comfort. As on the RS660, Tuono 660 and the new RSV4, the fairing is double-walled, channelling air between its surfaces to give an aerodynamic downforce advantage without needing bolt-on winglets. 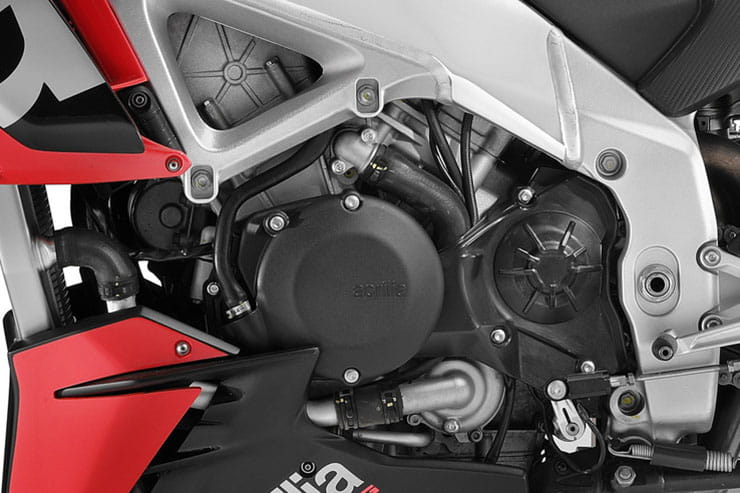 The chassis changes are the same as the new RSV4, with new underslung swingarm bracing for 2021, and the Tuono also benefits from the larger TFT gauges that come to the RSV4 this year.

As with the superbike range, there are two models on offer – the Tuono V4 and Tuono V4 Factory – with the latter featuring Öhlins semi-active suspension as standard while the base model has passive kit. The base model comes in grey or white while the Factory is available only in the black-and-red scheme seen here.

We’ll bring you more details on the bike’s detailed specifications as they become available, along with information on prices and availability as soon as Aprilia announces them.