The most extreme motorcycle simulator yet 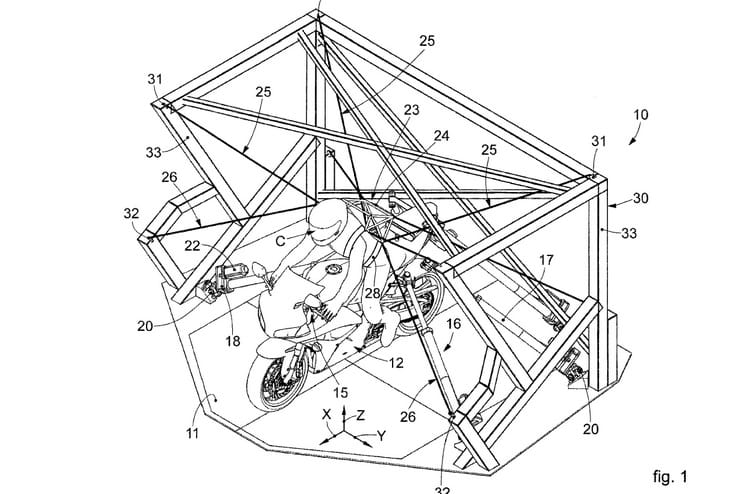 Motorcycle simulators have come a long way since the days of Super Hang-On in 1980s arcades. Now a German firm is developing a system that doesn’t just replicate the movement of a bike but also fakes the forces applied to the rider to give an even more realistic illusion of doing it for real.

This design, seen in a patent application from simulator specialists Vi-Grade, isn’t for games. It’s created to give bike manufacturers and testing facilities a system that can replicate the behaviour of a real motorcycle in an indoor setting, allowing test rides without having to worry about travelling to racetracks or waiting for the right weather conditions. It’s could also be an invaluable riding training tool for top-level racers, allowing year-round training and the ability to test set-ups without using real-world track time. 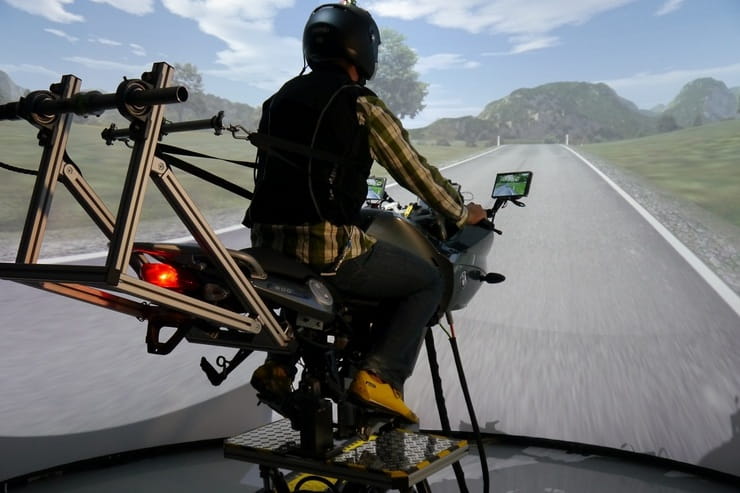 Bike companies already use simulators as part of their R&D process, with hydraulic rams to mimic the pitch, roll and yaw as riders lap virtual test tracks. However, while this sort of setup works well for cars, it’s not idea for motorcycles because it’s hard to replicate the forces applied to the rider during cornering, acceleration and braking.

Some simulators, like the BMW one seen above, have tried to mimic forces on riders, but not in all the possible directions. The BMW one here, for instance, can pull the rider backwards thanks to a harness, simulating acceleration forces, but doesn’t replicate the centrifugal force you feel in a corner. 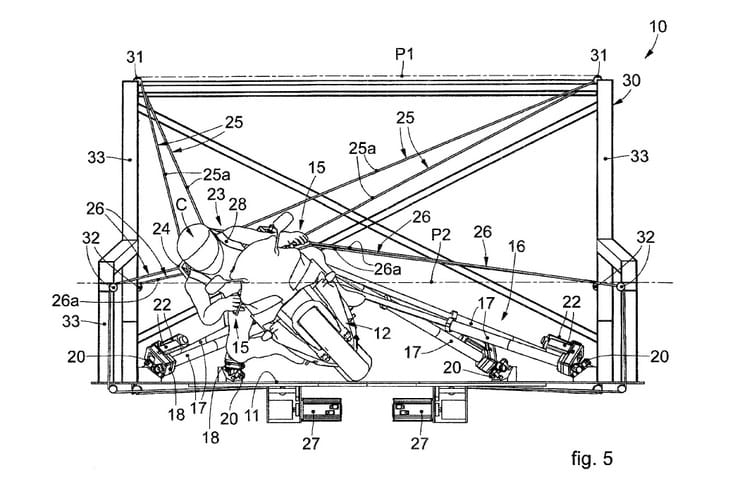 At full lean during a corner, you might be hanging a long way off your seat, but if you try the same thing on a stationary bike that’s held at the same lean angle you lack the centrifugal force that’s pushing you down into the seat. That means it feels completely different, even if your body is in exactly the right position.

Vi-Grade’s new simulator system is intended to solve that problem, attaching a frame to the rider’s back which is in turn connected to eight cords that can each be pulled under the direction of the computer to introduce forces forwards, backwards, sideways and even up or down.

At the same time, six hydraulic rams mounted to the bike move it in relation to the rider’s inputs and the simulation software’s instructions. Throw in a massive, curved projection giving a 180-degree widescreen view of the track ahead and it’s easy to see how a system like this could be incredibly useful for anyone developing a bike, trying to improve rider skills or wanting to simulate situations that might be dangerous or even impossible in the real world. 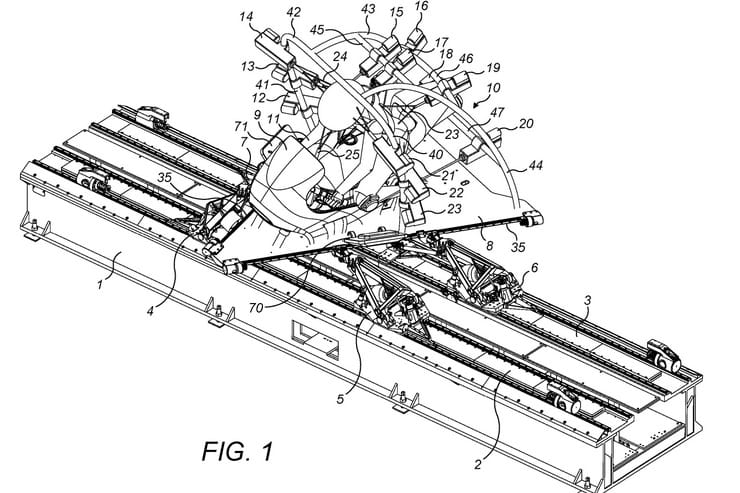 Vi-Grade isn’t the only company thinking along these lines. In 2016 McLaren Applied Technologies – an arm of the Woking-based F1 team and super car manufacturer – filed patents for a bike simulator that also focussed on the forces on the rider rather than just the bike.

The McLaren version, seen above, worked slightly differently, with 12 linear actuators attached to cords pulling on different parts of the rider’s suit, including the helmet, to replicate the forces experienced during riding.

Whether either the McLaren or Vi-Grade designs have been built and incorporated into manufacturer R&D operations yet isn’t clear, but as simulation becomes an ever more important tool in the development of bikes it’s certain that machines like this will be involved.

How long before a consumer-facing version is created, giving normal people the chance to safely experience MotoGP bikes and circuits with an equal level of accuracy? MotoGP has recently partnered with bike simulator firm Moto Trainer to offer leaning simulators connected to racing games (below), and during 2020 e-racing gained a massive boost when real-world competition was put on hold, so the Vi-Grade simulator surely gives a preview as to the sort of technology that will be much more widely available in years to come. 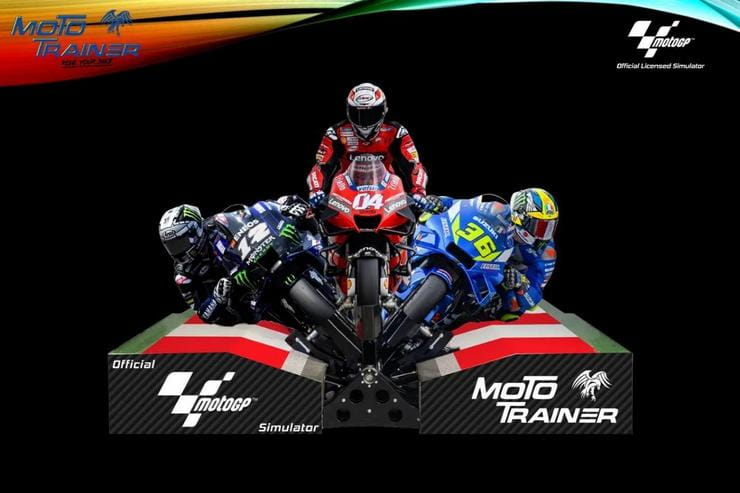 The Vi-Grade and McLaren simulators might be reserved for factory test riders only but anyone can get to try the Moto Trainer simulator, with the first UK-based example having been set up at Think Bike Gear in Leyland.

It offers riders the chance to load their own bike onto the simulator, where it gets rigged up with sensors on the throttle, brakes and gear shifter to connect it to the computer running the sim software.  Then it’s simply a case of loading in the track you want to ride on, with a choice of any MotoGP circuit on offer. Think Bike Gear are also putting their own coaches on hand to help improve your technique and lap times.

Think Bike Gear’s David Wilson said: ““With many track days cancelled throughout the global pandemic in 2020 and starting to affect dates in 2021, the Moto Trainer gives riders the perfect opportunity to be able to get the experience again with your own machine but in a virtual world! At Think Bike Gear we wanted to give riders of all ages and abilities the chance to practice the sensation and thrill of racing on track, even if you have never ridden before!

“We are thrilled to be able to offer various types of coaching through this platform, such as young rider training through to post-injury. Whether its building on physical skill again or overcoming a mental struggle, the Moto Trainer Simulator will deliver. For these reasons, we felt it so important to be the first in the UK to test and own the state-of-the-art equipment.”

The firm also intends to have its Moto Trainer sim at the British GP at Silverstone MotoGP round this year.