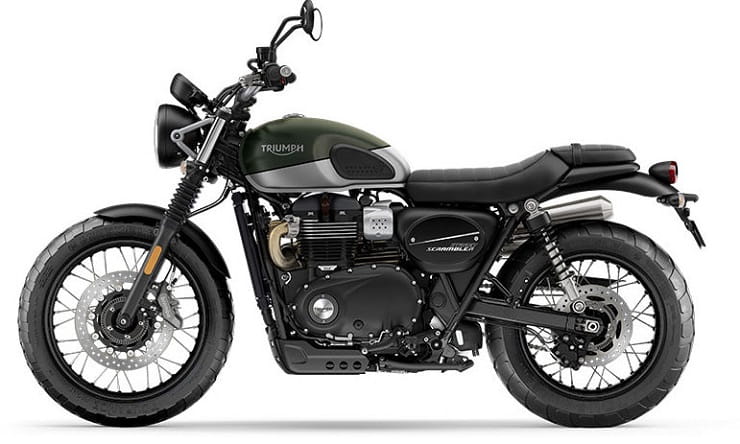 Here’s the 2020 Street Scrambler – how will the ‘Sandstorm’ version differ?

A desert racing inspired version of Triumph’s 900cc Street Scrambler looks set to join the firm’s range with the news that the ‘Sandstorm’ name is to appear on a version of the bike.

The new model’s moniker has emerged in American emissions documents, while equivalent European paperwork also lists the bike under the shortened ‘Street Scrambler Sand’ title. Between them, the documents appear to confirm minor engine tweaks need to push past Euro5 emissions limits, and although power is set to be unchanged at 64.1hp it peaks at 7250rpm instead of the current bike’s 7500rpm. Max torque is also unaltered at 80Nm, peaking 50rpm higher than the previous version at 3250rpm instead of 3200rpm.

In the States, the bike is listed as a 2022 model rather than a 2021 machine. That’s an anomaly of the country’s certification rules, which allow models that hit the market a few months into a year to be classed as the following year’s machines. The fact that the bike has already been approved in both Europe and the USA means we likely won’t actually have to wait until 2022 to see it.

The US documents don’t give many more details, but intriguingly the ‘2022’ Street Scrambler machines are listed as being 10kg lighter than the 2021 versions. However, that’s also likely to be an anomaly since the US paperwork adds an arbitrary figure to account for a rider’s weight and rounds the resulting number off to a nearby 10. More detailed European type approval documents show a figure of 228kg wet for both the updated Street Scrambler and the previous model. Triumph’s own specs claim a ‘dry’ weight of 203kg for the current bike, which tallies fairly with the Euro wet weight figure once 12 litres of fuel are added along with oil and coolant.

The Euro documents seem to confirm that an A2-legal, 47hp kit will be offered.

In terms of appearance, we can only guess at what the ‘Sandstorm’ version of the Street Scrambler will be like. One possibility is that the bike will get visual tweaks to connect it to the desert racing Scrambler 1200 that Ernie Vigil took 5th in class at the 2019 Mexican 1000, perhaps even adding a high-mounted front fender and larger front wheel for a more off-road-oriented style.

The second new model confirmed in the latest US documents is the Street Twin Goldline. Both the US documents and the latest EU ones show that it also has the same 64.1hp as the current model but unlike the updated Street Scrambler its peak comes at the same 7500rpm as the old, Euro4-certified model. Changes have been made, though, as German approval documents show that the new Street Twin puts out fewer hydrocarbons and oxides of nitrogen than the Euro4 version.

The Goldline version of the Street Twin will presumably bring cosmetic changes, but there’s no hint in the emissions documents as to what those updates will be.