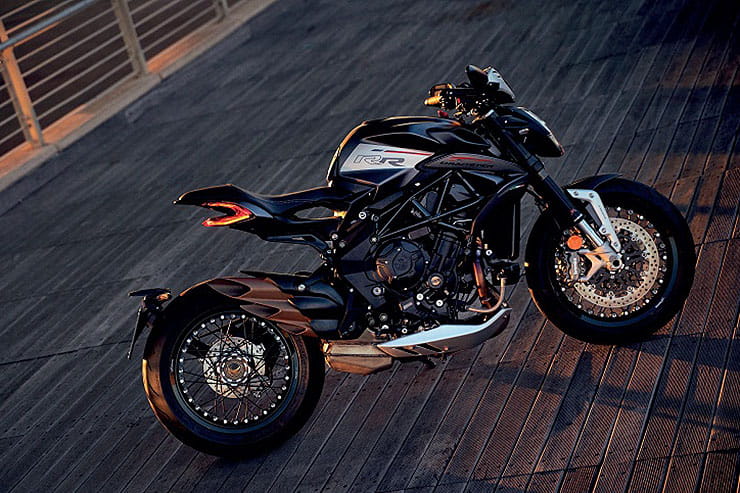 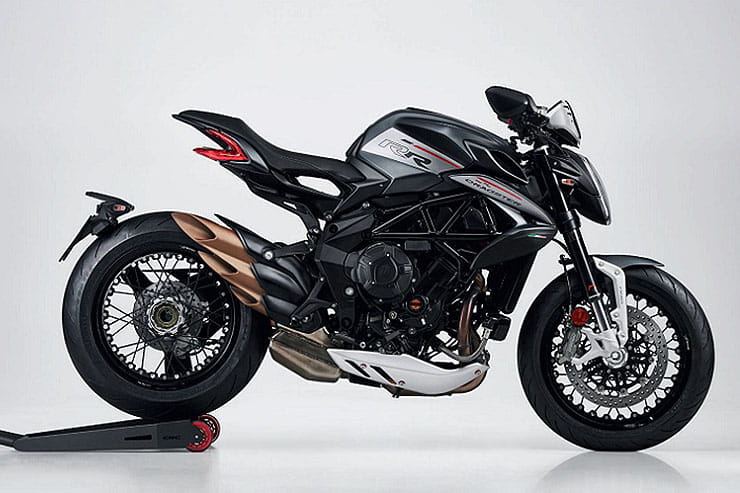 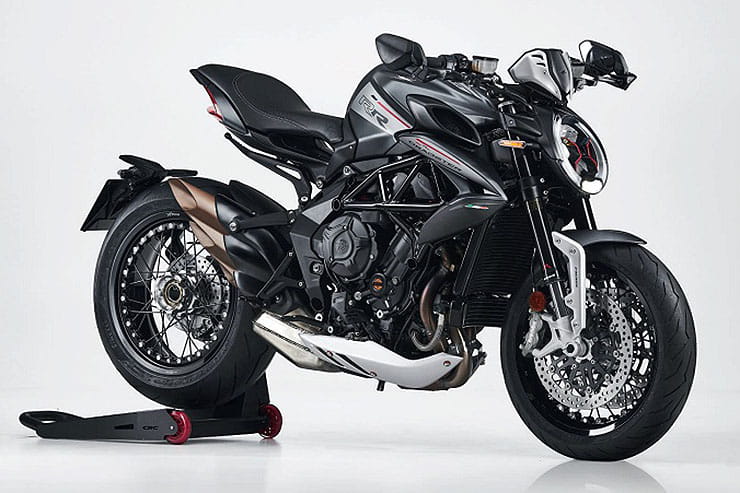 Euro5 emissions rules might have been a pain in the neck for engineers but they’re bringing a host of updates to this year’s bikes – with MV Agusta’s Brutale RR 800 and Dragster RR 800 the latest to get revamped to suit the rules.

In fact, the changes to the MV Agusta triples go much deeper than the engine tweaks needed to meet the regulations, extending to updates to the chassis, improved looks and higher-spec electronics.

Like every other manufacturer, MV’s challenge in meeting the Euro 5 rules was to slash emissions without losing performance in the process, and the firm has hit that target, retaining the same 140hp and 64lbft as last year’s Dragster and Brutale 800s. The basics of the three-cylinder engine, with its reverse-rotating crankshaft, are unchanged, but efforts have gone into reducing friction to claw back any power that’s sapped by the tuning and exhaust changes needed to meet the emissions limits. The tappets are DLC coated and the main bearings, rod bearings and countershaft bearings are redesigned, all with the aim of making the engine spin more freely. Higher-pressure fuel injectors and a new engine management unit complete the changes, along with a new clutch and third generation EAS quick shift for the transmission.

The exhaust itself is new, not only bringing Euro5 compliance but adding a new look with a trio of pointed, slash-cut exits stacked on the right hand-side.  The cheaper Brutale and Dragster Rosso models, with a lower spec and a detuned 112hp version of the engine, also gets the same updated exhaust and friction reducing Euro5 improvements. Further detuned 47hp, A2 licence-legal versions of the Rosso models will also be available on request. 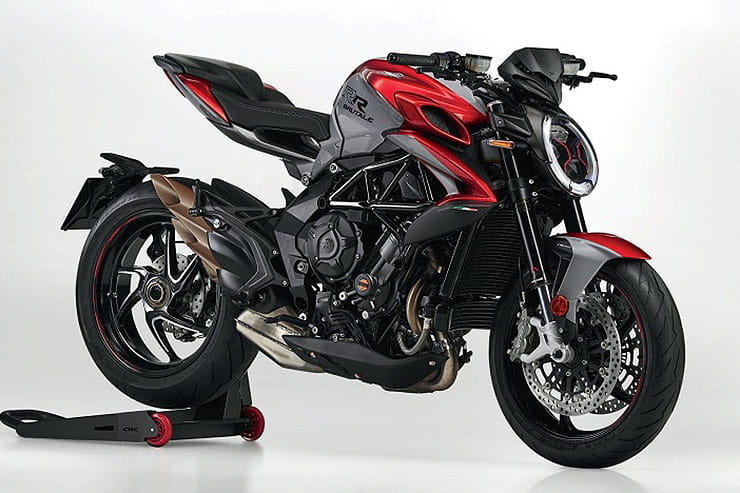 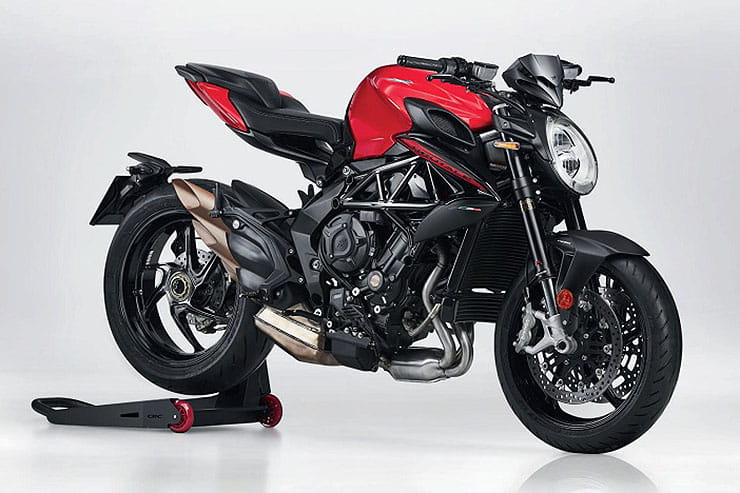 On the chassis side, all the 2021 Brutale 800 and Dragster 800 models get an improved frame, with redesigned plates at the swingarm pivot area that increase both the torsional and longitudinal rigidity.

While the suspension components are largely unchanged, the damper settings for all the versions of the Brutale and Dragster 800 are revised for 2021, and a new progressive rear suspension linkage is added to improve the ride. Another nod to comfort comes in the form of new seat padding, used in all versions, that’s claimed to help eliminate vibrations.

However, the electronic updates are likely to have a bigger effect on the riding experience than the mechanical ones. The Burtale RR and Dragster RR models finally get an IMU, developed specifically for MV Agusta by Italian firm e-Novia, to introduce cornering traction control and ABS, front wheel lift control that manages rather than prevents wheelies, cruise control and launch control, plus cornering lights in the LED headlight unit. The entry level Rosso versions also get cornering ABS and an IMU, but with fewer bells and whistles.

A new 5.5in TFT dashboard shows what all the extra electronics are up to, and new bar controls are added to give the rider control over the settings. 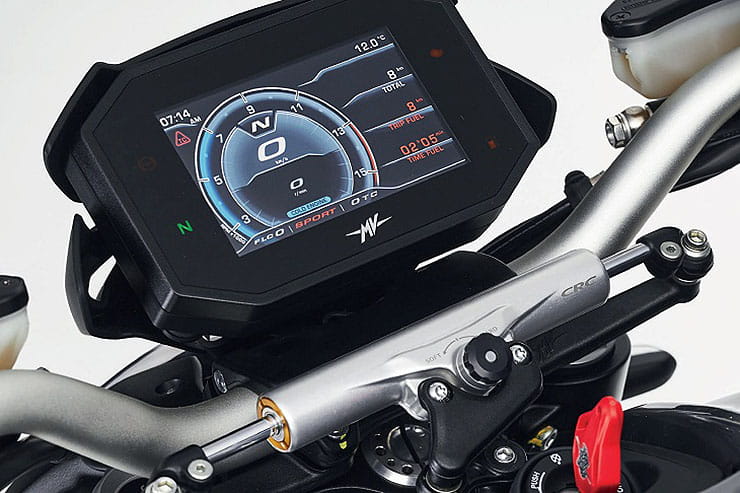 As before, the Brutale RR and Dragster RR also come in ‘SCS’ form, using a mechanically operated automatic clutch (basically a centrifugal clutch, made by Rekluse). Allied to the standard-equipment quick shifter, it means you can ride the SCS version without ever needing to touch the clutch lever, even when first selecting a gear from a standstill or when coming to a halt. But unlike more complex, electronic semi-auto systems, the clutch lever is still there and works completely conventionally when you do want to use it. The best of both worlds.

As well as Rosso, RR and RR SCS versions, the 2021 Dragster 800 can also be had in a range-topping RR SCS RC spec, featuring forged alloy wheels instead of the wires of the RR or cast alloys of the Rosso. It also gains carbon parts on the bodywork and graphics inspired by MV Agusta’s Moto2 and Supersport race efforts. It also comes complete with a track-only SC Project exhaust as part of a racing kit that ups power 150hp when fitted. Just 200 of the RC models will be made, each getting an individually numbered plate on the top yoke to prove its position in the run.

There’s no word on price or availability yet, but with Euro5 rules in force now it’s likely the new Brutale and Dragster models will be in dealers very soon. 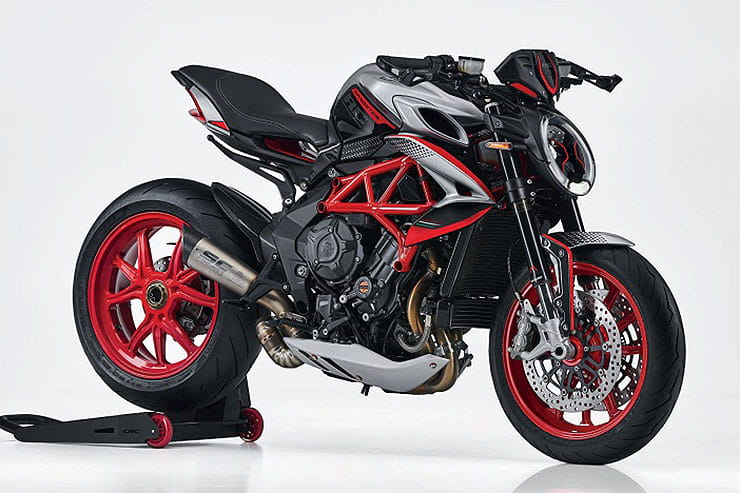 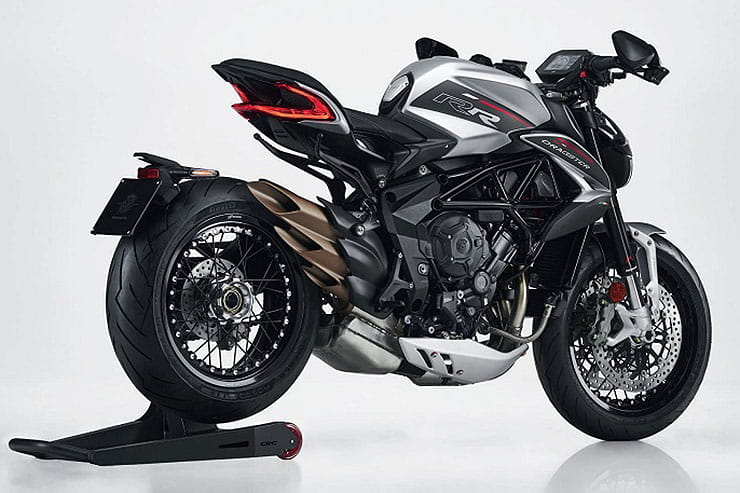