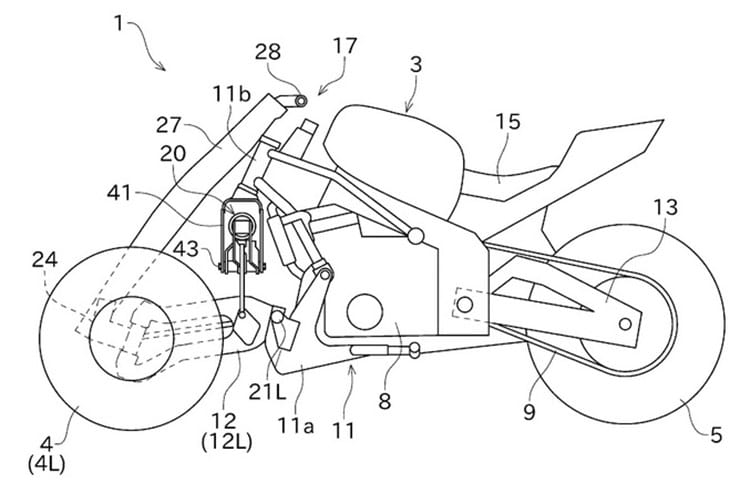 We’re all familiar with superbikes and as Yamaha’s Niken proves the leaning three-wheeler idea is ripe for more performance. So, are we on the verge of seeing the world’s first supertrike?

This patent application from Kawasaki suggests just such a machine could be on the cards, depicting a high-performance tilting trike that uses twin front swingarms instead of forks, plus a radical steering system that eliminates linkages that could deaden feedback to the rider.

In fact, a close look at the front suspension might set spark the synapses into recalling the firm’s 2013 Concept J, a Tokyo Motor Show eye-catcher that, despite appearing to be little more than sci-fi fantasy, has become a recurring theme for Kawasaki’s promotional material in the years since then. 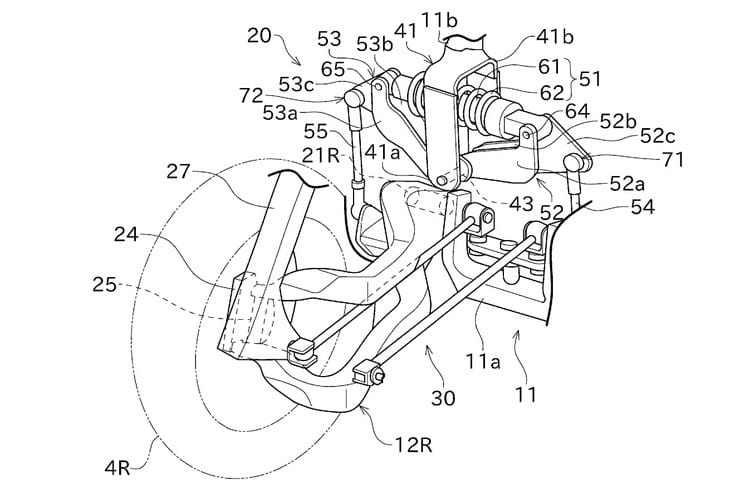 The two front swingarms on the patent are pretty simple to understand, each carrying a wheel hub mounted on a spindle that’s angled backwards to give the right combination of rake and trail.

They’re connected via vertical suspension linkages near their pivot points, with both front wheels sharing a single, transverse shock. It acts as the connection between the arms, ensuring that as the bike pitches into corners the two front wheels are both kept in contact with the ground. It’s a simple, elegant solution that looks rather lighter than the parallelogram-style linkages and quadruple fork legs used by Yamaha’s Niken, and one that definitely ensures the bike’s centre of gravity is lower. 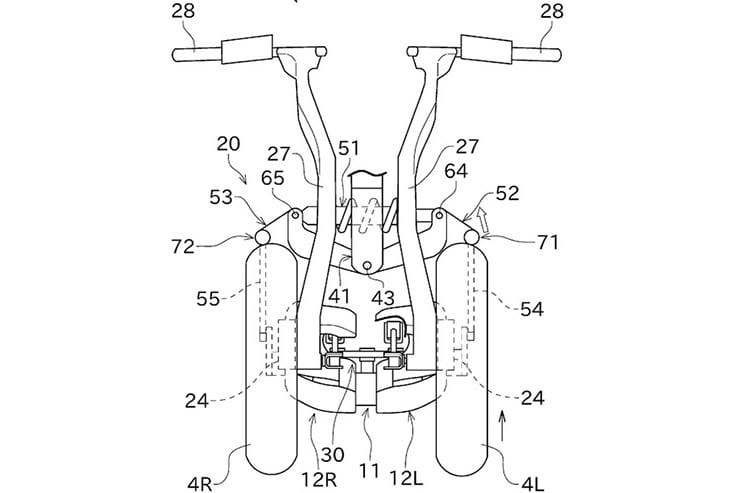 The normal problem with front swingarms is that they introduce complicated steering linkages to connect the bars to the front wheel, and riders used to the direct reactions and feedback that you get from normal forks often find that even the best leading-swingarm setups feel different as a result. Any slop in the linkages amplifies the problem.

Kawasaki’s solution to skirt that problem? Connect the bars straight to the front wheels. This is the where the new design most obviously replicates the Concept J’s layout, and it means that during corners the distance between each bar and its respective front wheel never changes. In other words, as the main body of the bike leans into a right-hand turn, your right hand goes up and the left hand goes down as the suspension moves. It’s guaranteed to feel weird first time out, but it’s an idea Kawasaki has clearly been pursuing for getting on for a decade now so there must be some merit to the thinking.

To make sure both front wheels turn in harmony, they’re connected via a simple system, with a longitudinal rod from each steering upright connected to a pivoting linkage mounted below the front shock, between the two swingarm pivots. As a result, both wheels adopt the same steering angle even though there left and right handlebars aren’t directly linked to each other. 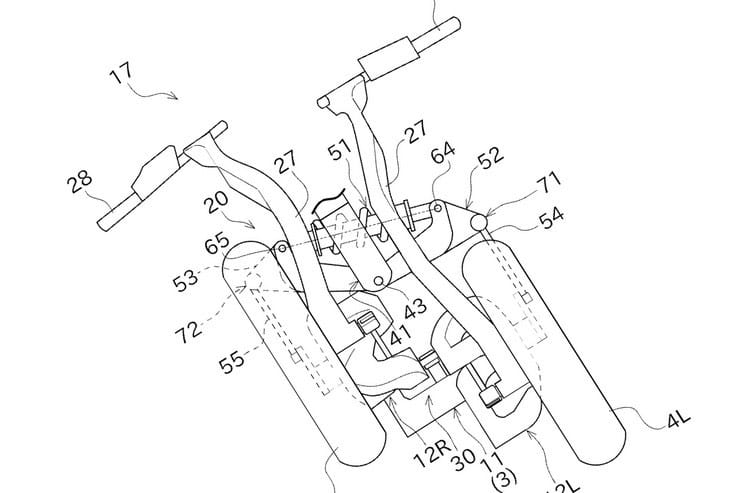 More concerningly, there doesn’t appear to be any form of suspension between the bar and each front wheel, so if a wheel drops into a pothole, it seems that the shock will be transferred straight to your hand. In terms of feedback the system should be unparalleled, but too much vibration or movement reaching the bars might be detrimental overall.

However, since this initial patent is focussed on the tilting system, steering and suspension, it’s quite possible that further developments of the design will introduce a system to stop the worst shocks from reaching your hands while keeping the same direct reaction to steering inputs.

The rest of the bike shown in the patent drawings, while admittedly simplified, appears to show a multi-cylinder, superbike-style design. In fact, the trellis front section to the frame – which strangely appears to retain a conventional headstock even though it’s only used as a mount for the transverse front shock – looks quite a lot like the front of the supercharged Ninja H2’s chassis. The patent itself says there’s a combustion engine aboard but gives no more detail. It also emphasises that the same suspension and steering setup could be used on an electric bike, like the original Concept J.

One element of the Concept J that isn’t carried across to the new patent is its adaptable riding position and geometry. Kawasaki’s concept – which is still used in promotional material now, most recently in a December 2020 video on YouTube – is the poster child of the firm’s ‘Rideology’ philosophy. On the Concept J, the two front swingarms could be moved laterally, pushing the front wheels apart or bringing them close together depending on the circumstances. The bike also allowed the bars to move up and down, changing the riding position from upright to nearly prone as speed and the situation changed.

However, the fact that the Concept J is still something of a poster child for Kawasaki’s R&D is surely evidence that the three-wheeler seen in this new patent is more than an idle doodle. 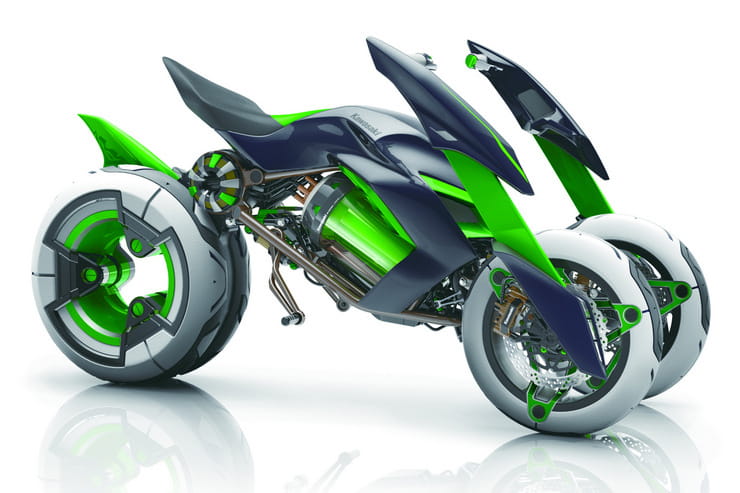