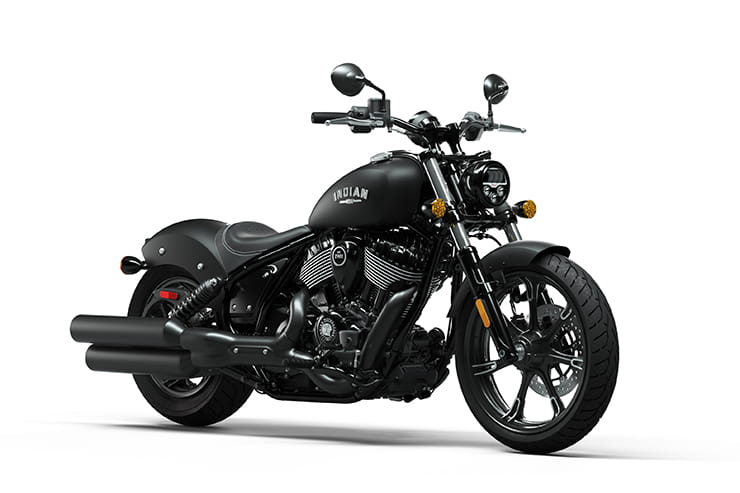 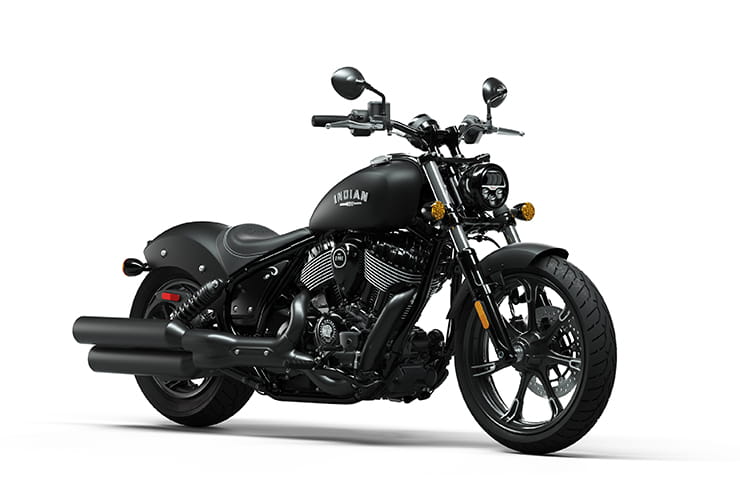 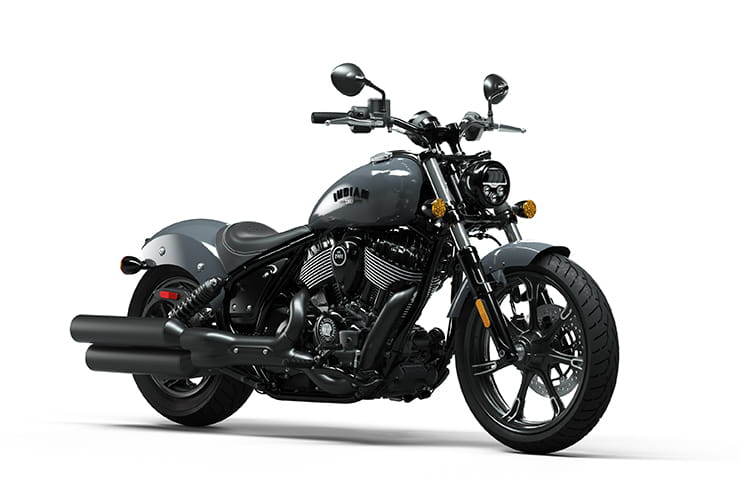 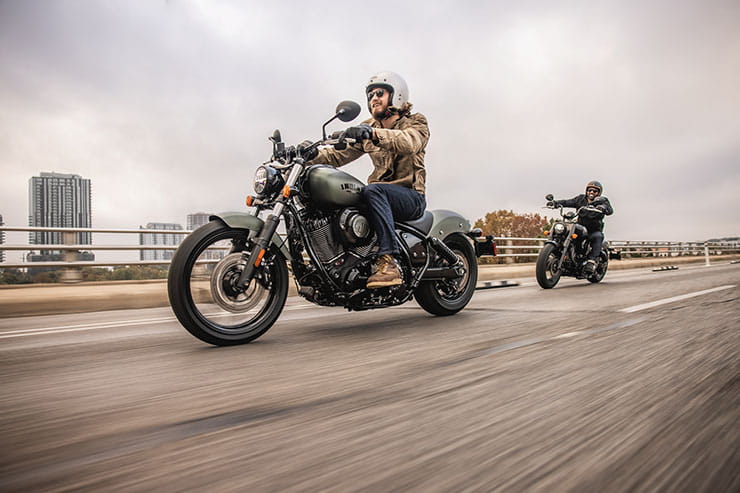 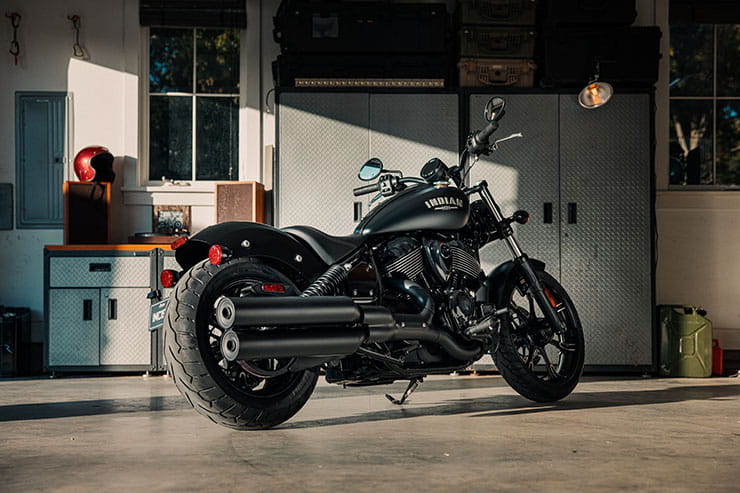 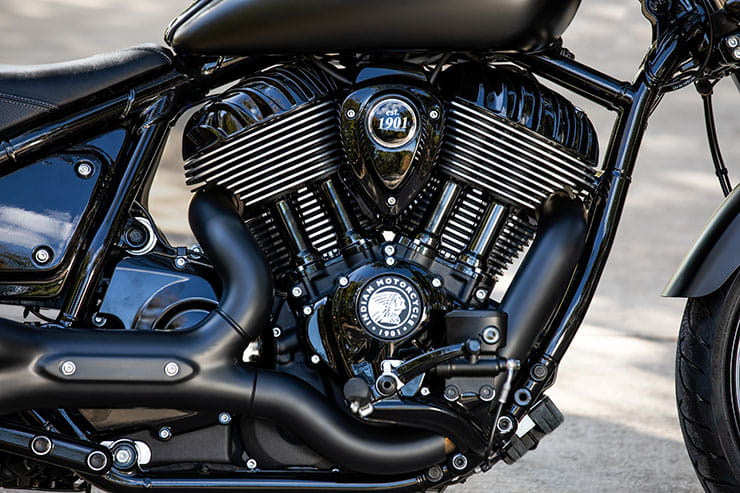 When a bike is specifically designed to be a retro machine that harks back to its own heritage it becomes a challenge for designers tasked with reinventing the look and technology. With its new 2021 Chief range Indian has addressed the issue by repositioning the bike with a lighter, bobber-style look wrapped around a completely new chassis.

While the Chief name dates back to 1921, making this its centenary year, the last generation Chief has been around since 2014 and in its style paid homage to the Indians of the 1940s and 50s. That meant huge, all-enveloping fenders front and rear and florid elements including an over-the-top headlight bezel and a saddle that wouldn’t look out of place sandwiched between Roy Rodgers and Trigger.

The 2021 model is still very clearly in the traditional V-twin cruiser mould but takes the bobber route for a less ostentatious overall style. The headlight is smaller, without the cowl of the old model. The seat looks like it’s designed for a motorcycle rather than a horse. The mudguards go from being the biggest in the industry to some of the smallest you’ll find on a bike of this class.

Indian’s design director, Ola Stenegard, explained: “We wanted to capture a timeless look that never goes out of style, and looks beautiful whether naked or fully dressed. We also wanted to keep it simple enough to allow riders’ imaginations to take flight with personalization options and possibilities. Ultimately, this is a bike that evokes emotion with simple mechanical styling and raw American muscle. It’s a pure riding machine.”

And it’s not just a visual revamp, either – under the subtle new skin there’s a completely different chassis that, like the bodywork, swaps excess for simplicity. The old Chief, despite its vintage appearance, featured a cast aluminium frame that was a far cry from the tubular steel designs normally associated with cruisers. Now it’s gone, replaced with just the sort of simplistic steel design that it was developed as a rebellion against. 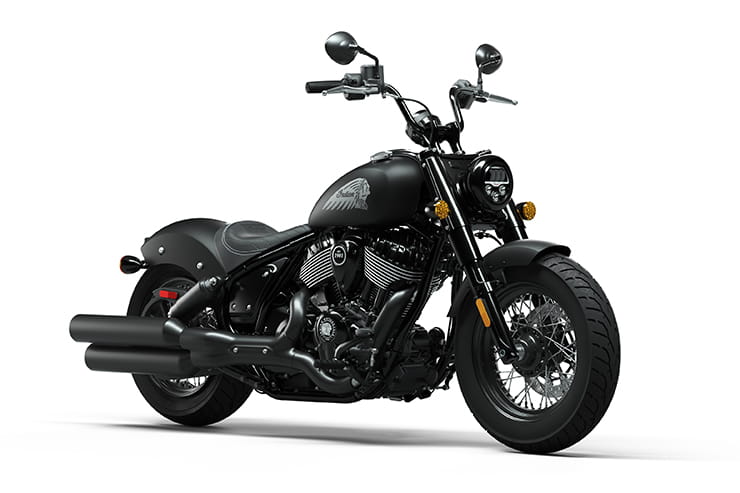 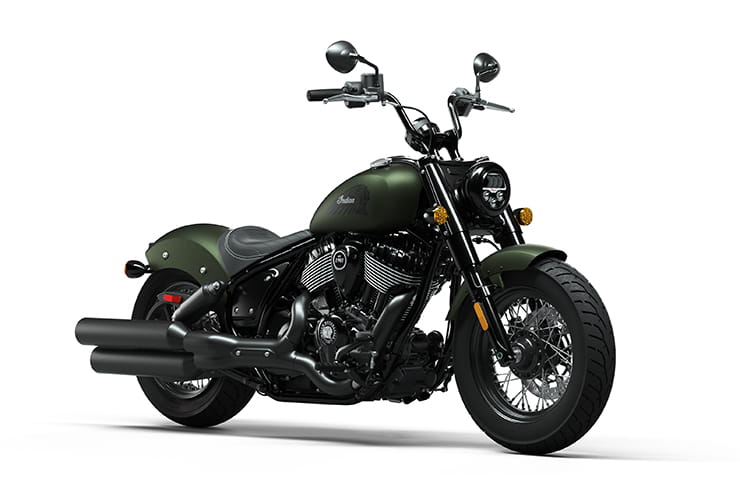 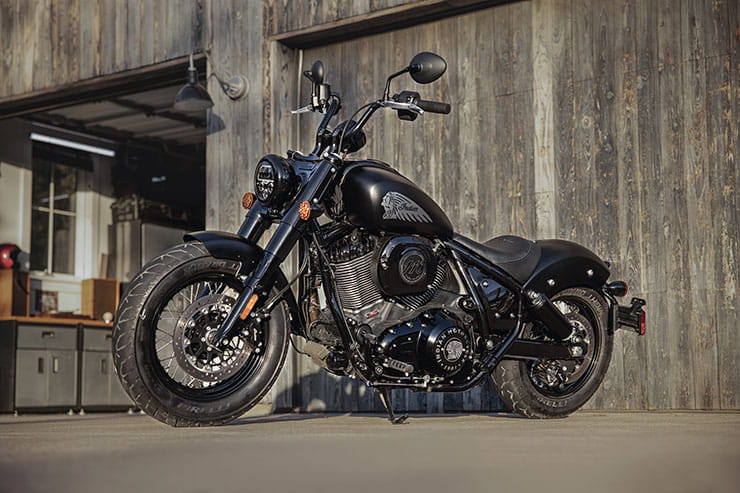 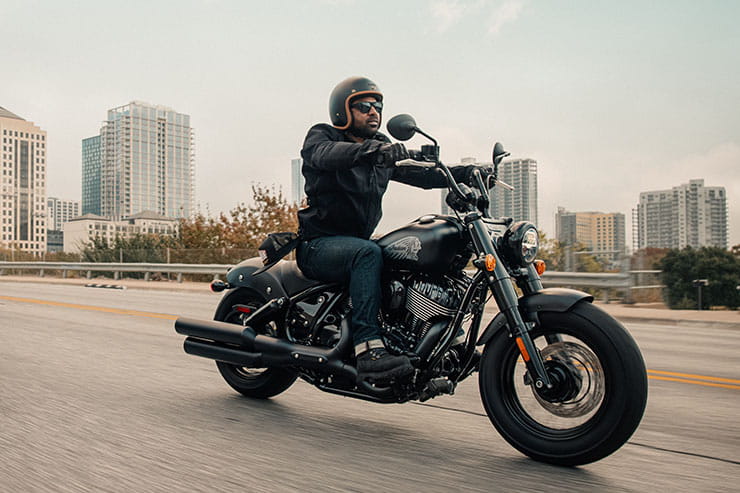 The Chief range for 2021 is made of three models; the Chief Dark Horse, Chief Bobber Dark Horse and the Super Chief Limited. Notably there’s no simple ‘Chief’, which suggests an opening for more versions in the future.

All three share the same ‘Thunderstroke 116’ engine, a version of the existing V-twin that was introduced for Indian’s tourer range in 2020. With a 116ci (1890cc) capacity, it’s good for 119.5lbft of torque. Or, to put it another way, around 9lbft more than the new 2021 Suzuki Hayabusa can muster, and the Indian achieves its peak at a mere 3200rpm. Indian doesn’t like to talk power figures, but realistically somewhere in the region of 100hp is probably about right for the low-revving V-twin.

The Chief Dark Horse, at £15,795, is the entry level version. As its name indicates, there’s no chrome to be seen here, although you do have paint options other than black; grey and green are also options, although both are subdued hues. It’s also the only version of the new bike to feature alloy wheels, with a 19in front and 16in rear both wrapped in Pirelli Night Dragon rubber.

Next up there’s the Chief Bobber Dark Horse, which again does without chrome and comes in slightly different grey and green variants as well as black. It’s marked out by its fat wire wheels, 16in in diameter at both ends to add to the bobber look. It also gains fork and shock covers as well as a headlight bucket that cleans up the look of the front without going to the excesses of the previous generation of Chief. Price? £17,695.

At the top of the line of new Chief models comes the £19,995 Super Chief Limited, which adds a splash of colour and shine to proceedings with a chromed exhaust and polished engine, plus a quick-release screen, floorboards instead of foot pegs, leather saddlebags, a pillion seat and colour options including metallic red and blue as well as the inevitable black. 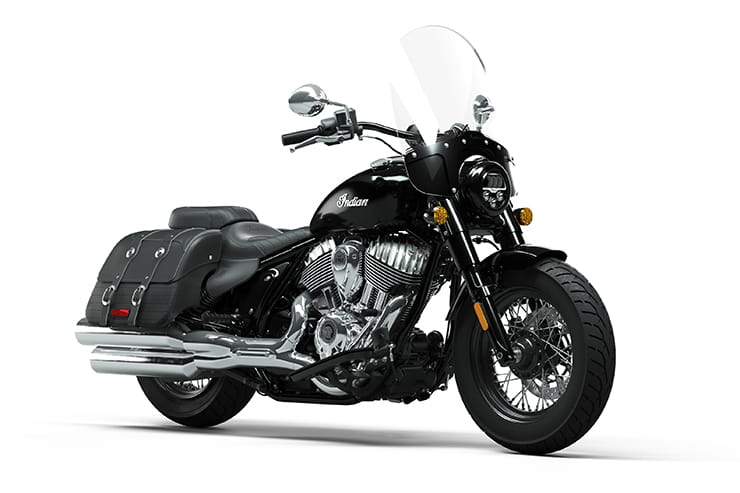 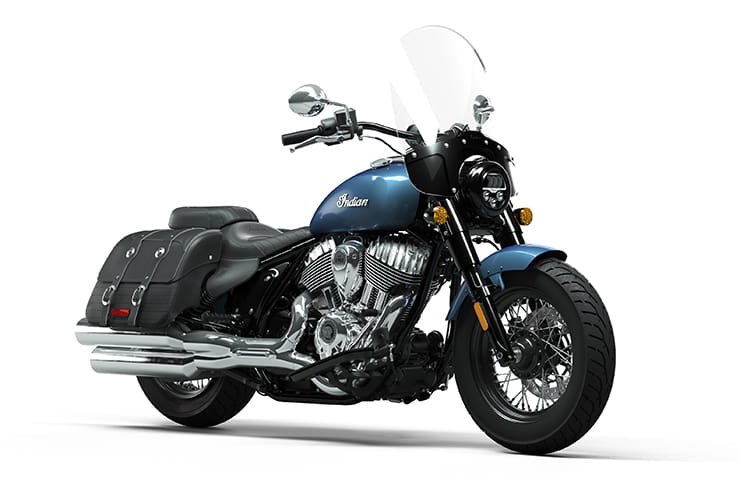 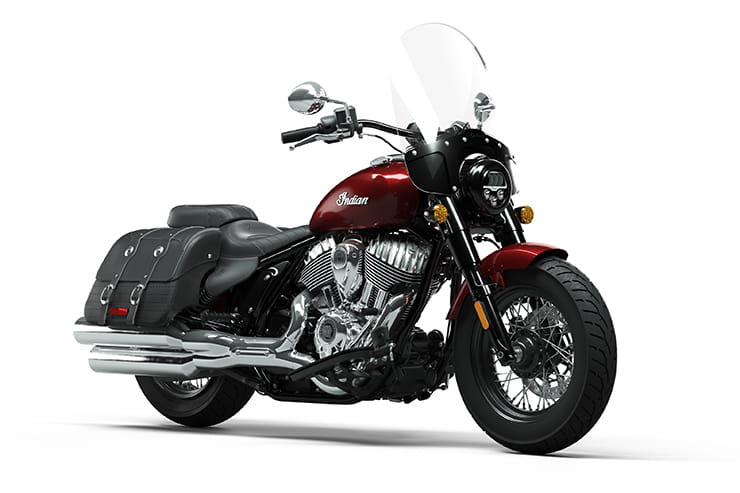 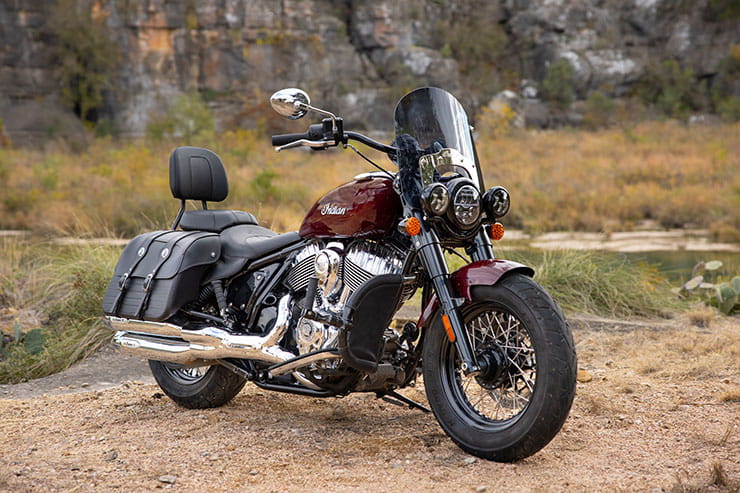 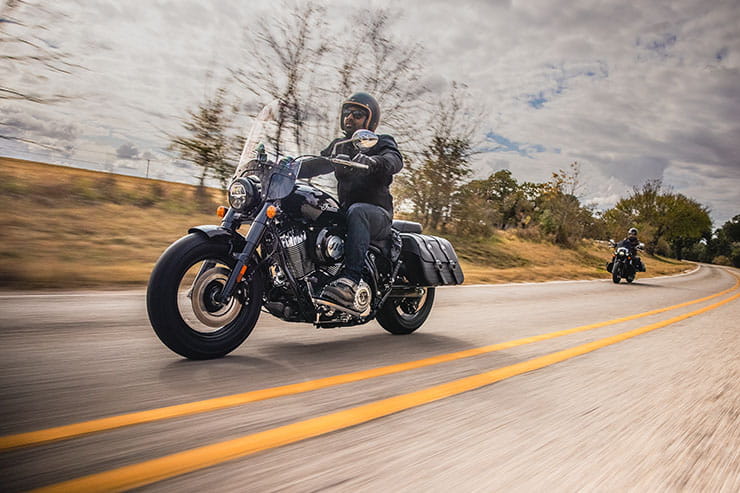 Despite the Chief’s retro style and Indian’s decision to abandon the old model’s advanced alloy frame, there’s still technical innovation on the new bike. Most notable is the instrument panel, which might look like a simple, single, circular gauge but is actually a full-colour TFT, touchscreen display that’s the latest generation of Indian’s Ride Command system. Operated via the bar controls or by touch, the screen gives a choice of displays, turn-by-turn navigation, and when connected to a wireless headset can give control of music and calls, connecting to your phone by Bluetooth or USB. 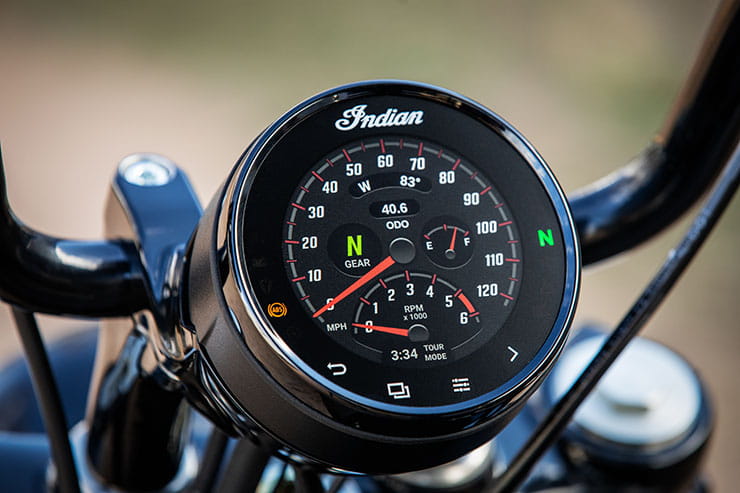 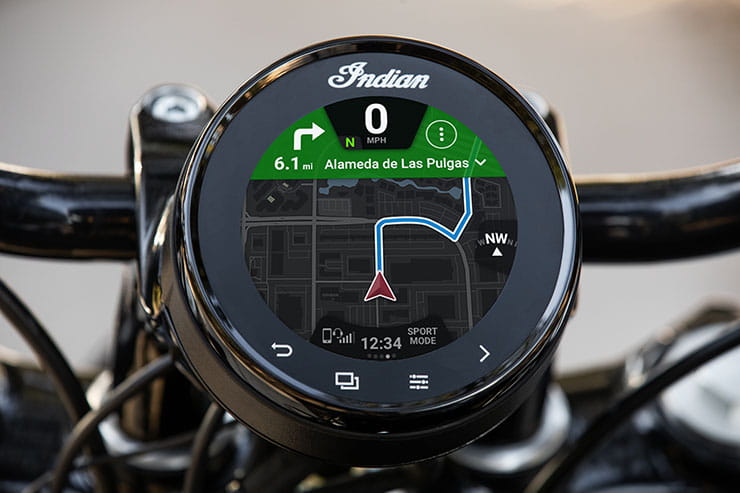 There are benefits to the bike’s redesign beyond the obvious visual and technology changes, as the stripped back bodywork and simplified chassis also makes for a smaller, lighter machine.

All versions now have a 1626mm wheelbase, down from 1701mm, while retaining a low 662mm seat height. The simplest model, the Chief Dark Horse, is also a remarkable 44kg lighter than its direct predecessor at 304kg complete with a full tank of fuel. In the same state the Chief Bobber Dark Horse comes in at 315kg and the Super Chief Limited is 335kg.

Mike Dougherty, Indian’s President of Motorcycles, said: “The Indian Chief is a truly iconic motorcycle and what better way to celebrate its 100th birthday than unleashing an entirely new Indian Chief line up. These bikes capture the mechanical simplicity and attitude of classic American V-twins, yet bring it all forward with modern sophistication and features. We could not be more thrilled to bring this new platform into our line-up.”