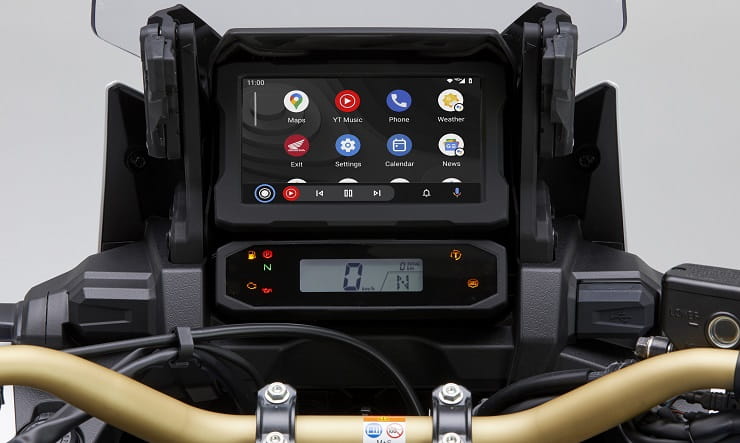 The ever-increasing influence of the smartphone on our day-to-day lives is something you might love or hate but Android Auto (like it’s rival Apple CarPlay) makes for a seamless transition of the technology onto four-wheels. And onto two wheels now, as the Honda has announced the software can be uploaded onto the TFT display of its CRF1100L Africa Twin and Africa Twin Adventure Sports models.

Although not the first bike to get Android Auto – the Gold Wing was given the capability last year – the Africa Twin is a far more mainstream offering, and no doubt marks the opening of the floodgates that will see the system appear across a host of models in the months and years to come. Apple’s take on the idea, CarPlay, was introduced to the Africa Twin as part of the bike’s mild refresh for 2020, but by adopting the Google-developed Android Auto, Honda brings similar tech to a whole new group of Android-using customers.

In case you’re been restricting yourself to a decade-old Nokia, the idea of Android Auto and Apple CarPlay is to allow your bike’s TFT screen access to your phone’s apps, storage and processing power, all dressed in visuals and a user interface intended to make them easy to understand and operate on-the-go.

It means that streaming online music services like Spotify or TuneIn can be used, along with YouTube Music of course, audio book services like Audible or even systems like Plex which let you stream your own library of tunes from your home computer. It also adds more options and flexibility when it comes to podcasts or audio book apps and means you can use Google’s own Maps navigation system or others like Waze depending on your preference. With the data coming via your phone, there’s no need for additional sim cards or contracts, and it means that the album, audiobook or podcast you were listening to at work or in the gym can be continued seamlessly when you get on the bike.

On top of that, Android Auto gives access to Google’s voice control system, allowing you to make calls, change what you’re listening to or reply to texts, emails, or even other messaging apps like FaceBook Messenger, all without lifting a finger and with your phone tucked safely away.

Importantly, given the speed with which technology moves, the adoption of the system means the Africa Twin’s multimedia tech shouldn’t get left behind. Provided Android (and Apple in the case of CarPlay) continue to support the system, your on-board tech evolves with that of your phone.

To use Android Auto on the Africa Twin, your bike will need a software update installed by a Honda dealer, and you’ll need a Bluetooth headset fitted to your helmet to allow the audio, calls and voice control functions to work.