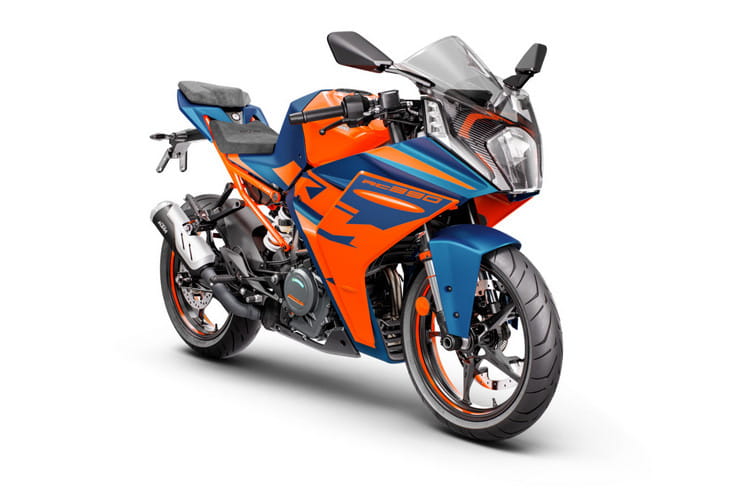 KTM’s relationship with sports bikes is a complicated one. The firm went all-in with the RC8 back in 2008 and expanded into smaller sectors with the RC125, RC200, RC250 and RC390 over the following years – only to retreat again by dropping the RC8 superbike in 2015 and leaving the remaining single-cylinder models without updates for years on end.

With multiple wins in MotoGP to its credit since last year, as well as success in Moto2 and Moto3 there are signs of renewed interest in the firm’s sports bike line-up, first with the limited-edition RC 8C track-only twin and now with a revamped single-cylinder RC range. 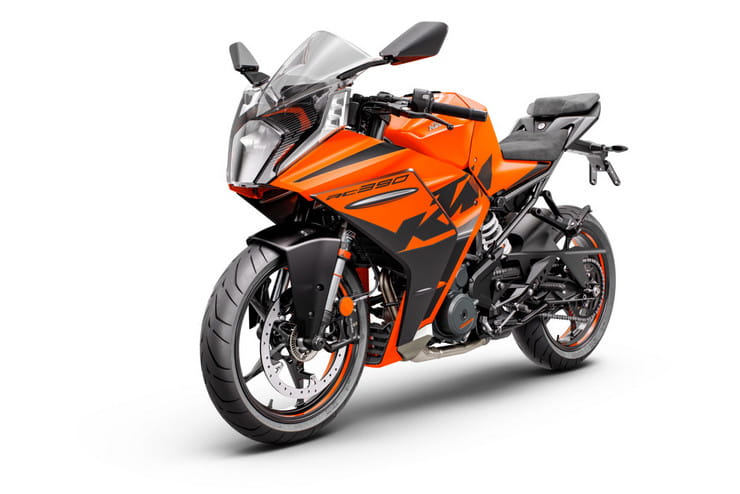 The RC390 and RC125 are KTM’s single-cylinder sports offerings (although 200cc and 250cc versions have been sold in the past on some markets). They share the majority of their components so the main changes for 2022 apply to both models.

The styling is clearly all-new, and in a break from the usual trend to make bikes ever smaller, KTM has opted to enlarge the bikes, creating fairings that slice through the air more efficiently.

The new design features separate inner and outer fairings, channelling airflow around the rider, while attention has also been paid to making the bodywork easier to remove than before, with fewer fasteners. The search for aero efficiency has led to a narrower section between the rider’s knees to make it easier to tuck out of the airflow and improve comfort and control, with a redesigned 13.7 litre fuel tank.

At the back, a new seat subframe carries a redesigned tail unit that’s smaller than before but carries a thicker, more comfortable pillion pad. 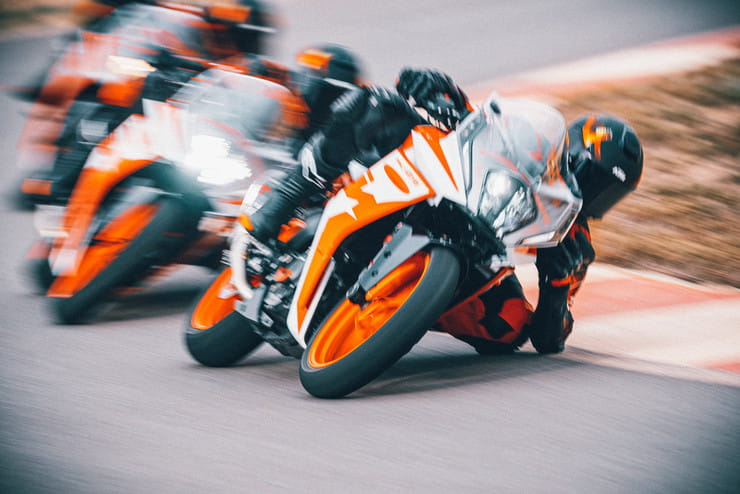 The nose styling is a huge departure from the original design, replacing the deeply inset headlights and unusual beak of the earlier model with a rounder, more conventionally shaped design.

Although the shape is less controversial, the nose still stands out from the norm, expanding on the previous RC’s idea of using clear plastic for the whole upper nose section, coloured from behind to define the edges of the ‘screen’. With a faired-in headlight and oversized sidelight and turn signal sections running up the edges of the nose, the impression is that the whole front upper is one big windscreen. 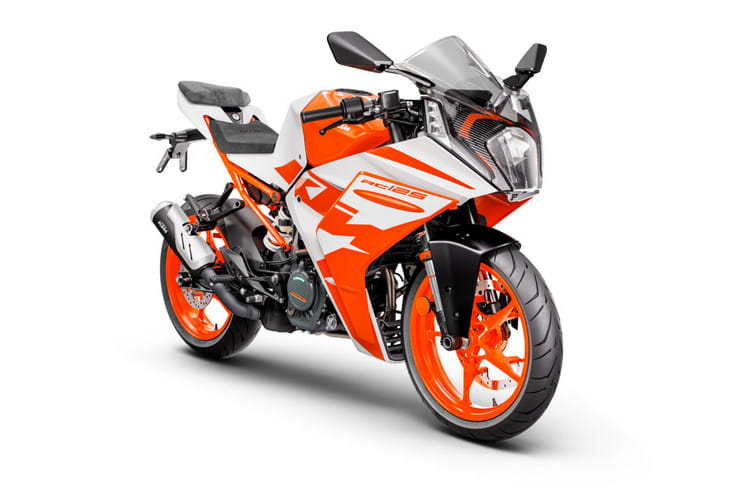 The frame, while similar to the previous generation, is claimed to be all-new, with revised rigidity, and KTM has added lighter wheels and updated suspension to the mix.

The RC125 also uses WP Apex kit at both ends, but without the adjustability that the 390 enjoys.

Despite their differing performance levels, both models have the same new wheels, a claimed 3.4kg lighter than before and wearing 110/70-17 front and 150/60-17 rear rubber. More weight is saved with the ByBre brakes, which are 960g lighter than before and include a ‘Supermoto’ ABS system to stop the 320mm front and 230mm rear discs from locking. This setup allows the rear wheel’s ABS to be deactivated, so the rear can be locked on corner entry, and electronics detecting rear wheel lift are also disabled so you can brake harder even if the back of the bike is in the air. 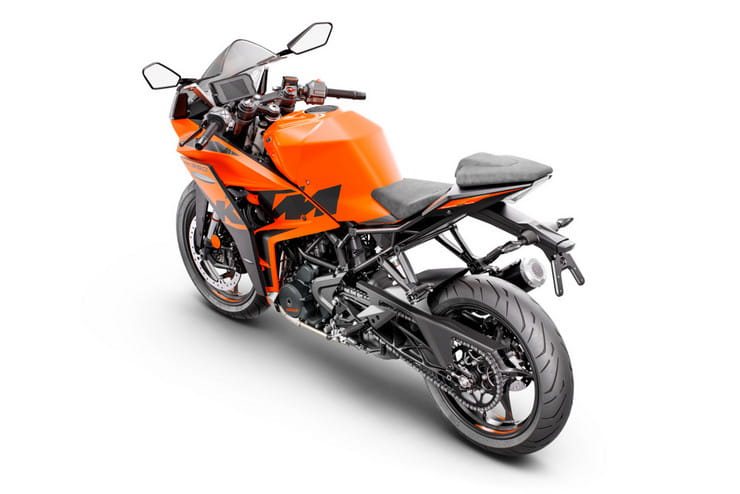 On the engine side of things, the 125cc and 373cc singles get a 40% bigger airbox, revised injection and ride-by-wire throttle mapping (allowing the fitment of KTM’s Quickshifter+ as an option) and new exhausts.

However, the bikes’ electronics are the real unseen advance. The RC390 gets cornering ABS (disabled in Supermoto mode), plus a cornering traction control system that can intervene if the rear wheel starts to spin.

Both the RC125 and RC390 get new LED headlights and DRLs, plus a new colour TFT dashboard that’s a generational step forward from the old LCD unit, including smartphone connectivity for music and calls, controlled via the bar switchgear.

Although KTM hasn’t revealed full specs yet, the RC390’s power remains at 43hp, with 37Nm of torque on tap. The RC125’s peak will have to remain at 15hp if it’s to be learner legal. 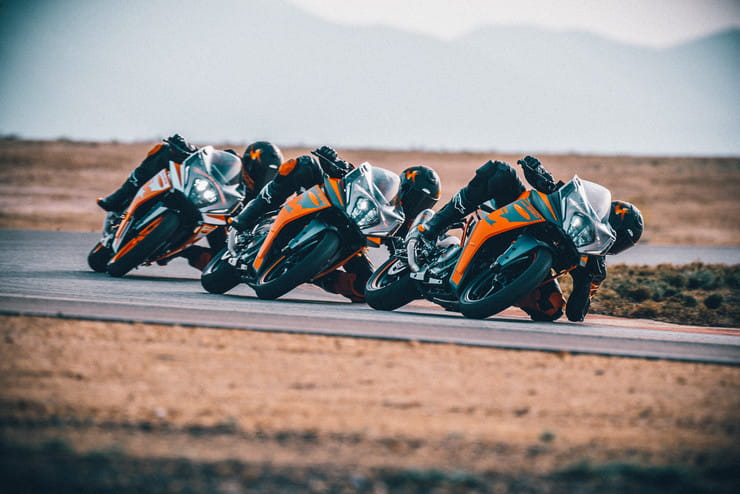