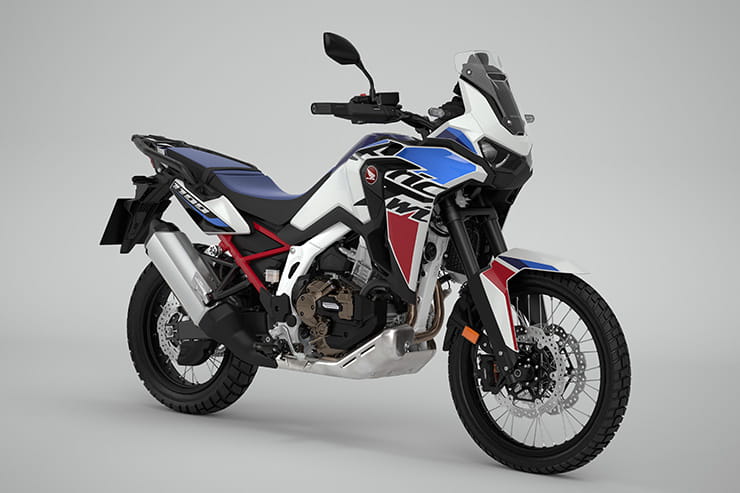 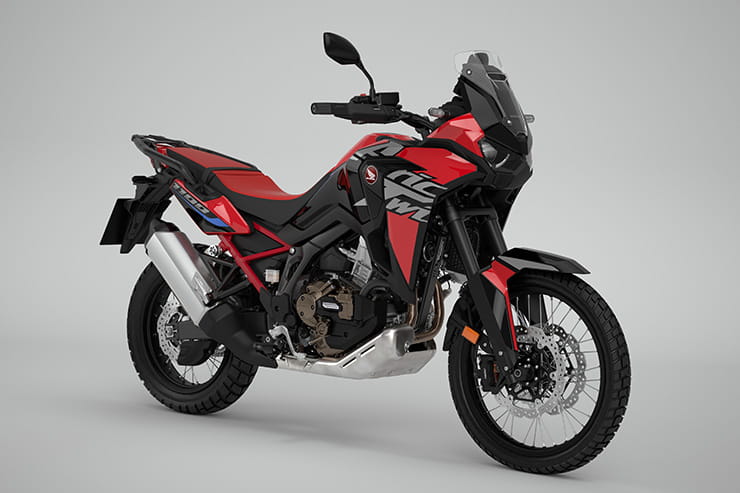 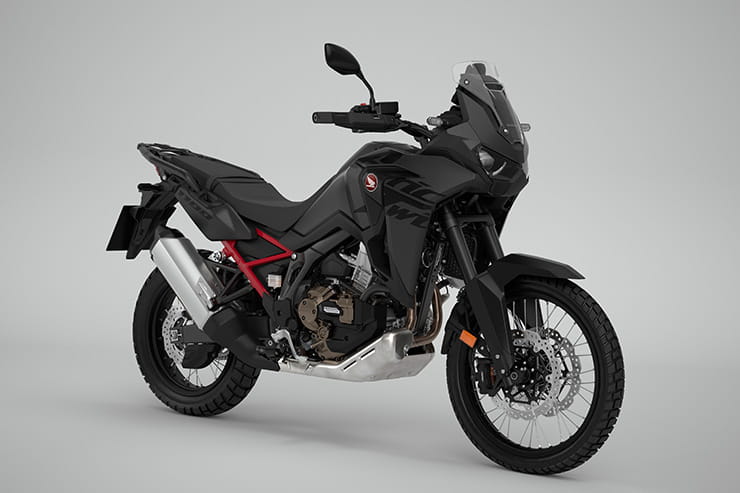 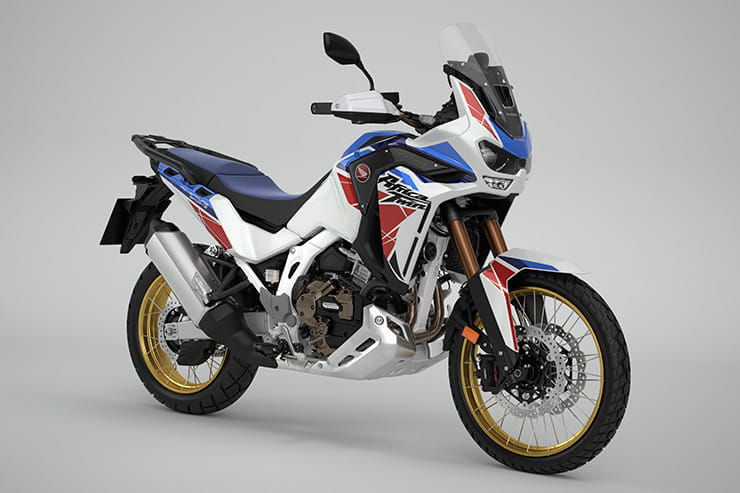 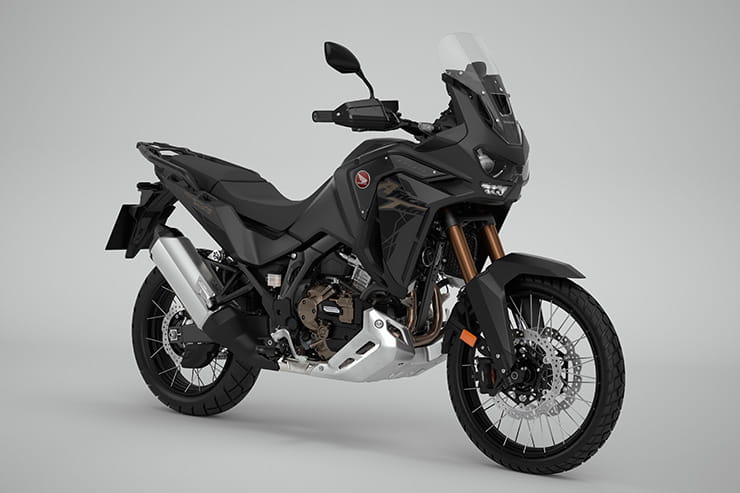 After a complete overhaul in 2020 including a new chassis, larger engine and new styling it would be a surprise to see Honda radically changing the Africa Twin for 2022 – but the firm has still managed to tweak the model for both cosmetic and mechanical improvements.

Both the Africa Twin and the more off-road-oriented Africa Twin Adventure Sports get changes, although the new paint schemes might be more likely to draw attention than the technical updates. 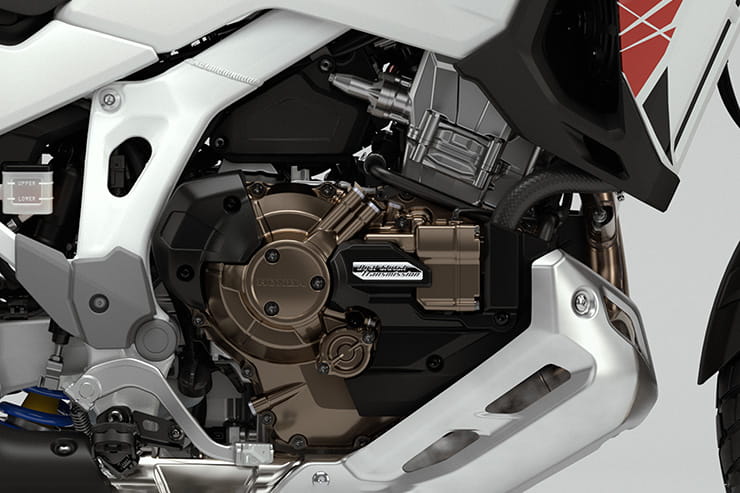 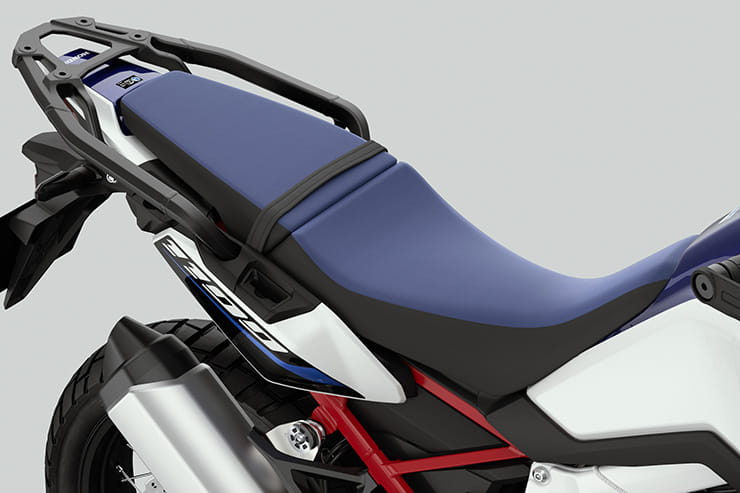 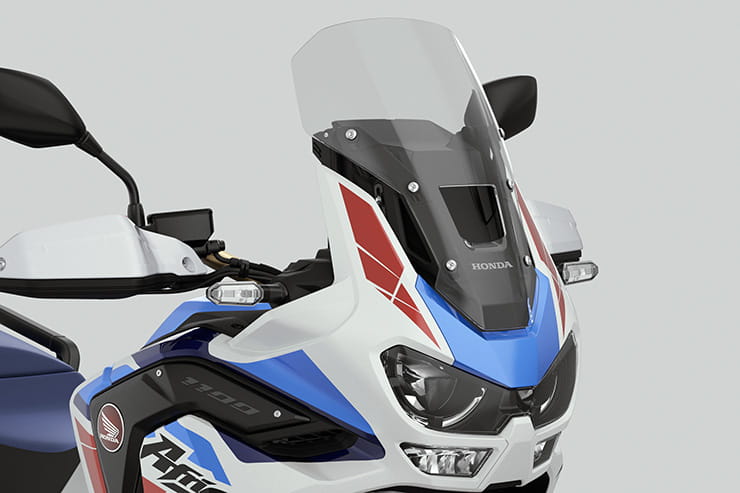 Before we dig into the colour options, let’s clear up what’s been improved mechanically. Most notably, the semi-automatic DCT versions of both the Africa Twin and Adventure Sports – which account for nearly half of the bikes’ sales – have been given new settings that revise the way the bikes behave in 1st and 2nd gears, making for smoother getaways. Buyers of the manual transmission bikes who specify the optional quickshifter will also get improve electronics for smoother changes in low gears.

On the base Africa Twin, the biggest update is the inclusion of a standard-fit, black-painted aluminium rear carrier, while the Adventure Sports version’s only visible technical update is a lower windscreen than the previous year’s, still adjustable into five positions as before. 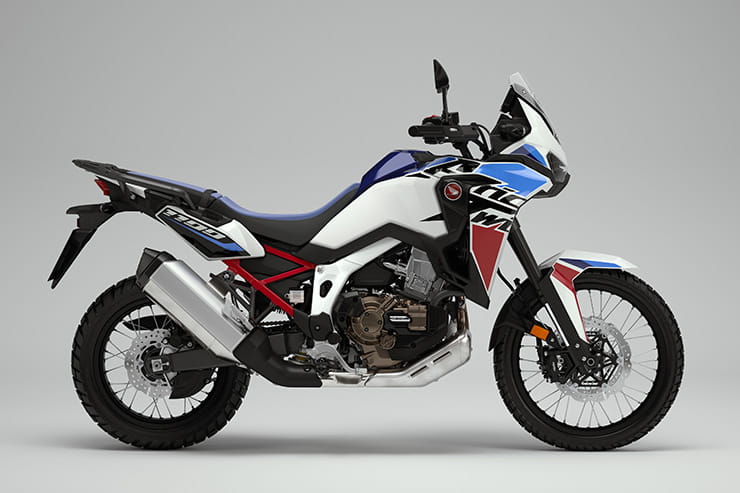 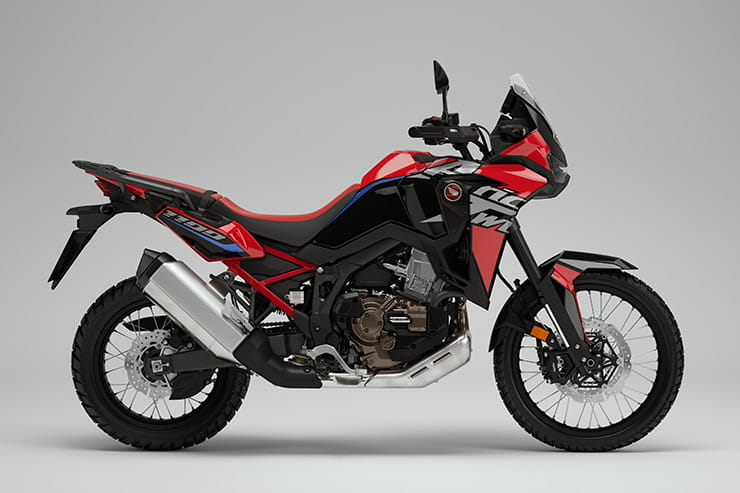 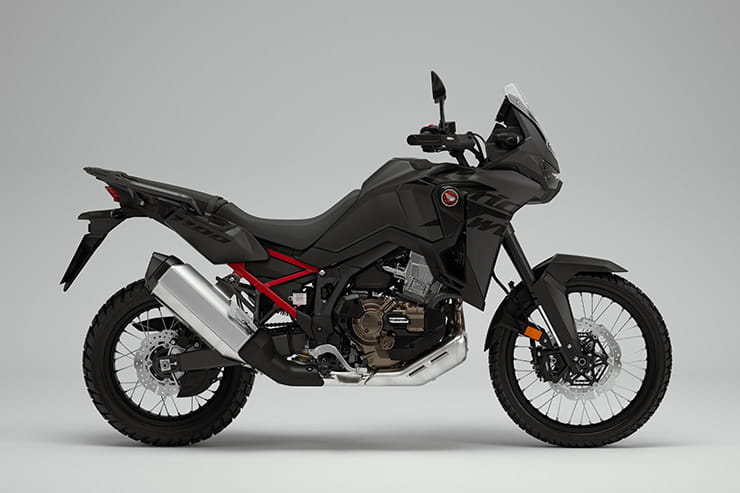 However, the paintwork and graphics changes are arguably more significant, as the base Africa Twin in particular gets a distinctly new look thanks to its 2022 schemes.

Dubbed ‘Big Logo’, the latest Africa Twin graphics live up to that name with an ‘Africa Twin’ logo on either side that’s too large to fit on the panels, plus oversized ‘1100’ badges on the tail. Three versions are being offered – white ‘tricolour’, red or black – and they all manage to conjure the late 80s, early 90s feel of the Africa Twin. The tricolour scheme is an update of the classic Africa Twin colours, with red and blue on a white background, and gains a white frame like the original model’s for 2022, along with a two-tone seat that adds a blue upper section that’s also reminiscent of the original.

The red version switches that blue seat panel for a red one and features a black frame, while the black colour option has subdued black-on-black logos and a matching seat. However, whichever colour you pick the normal Africa Twin gets a bright red seat subframe in 2022 – something that was previously only used on the black version. 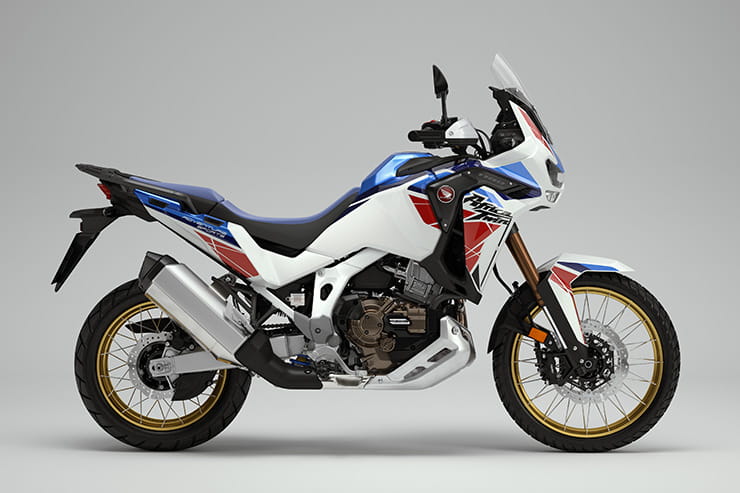 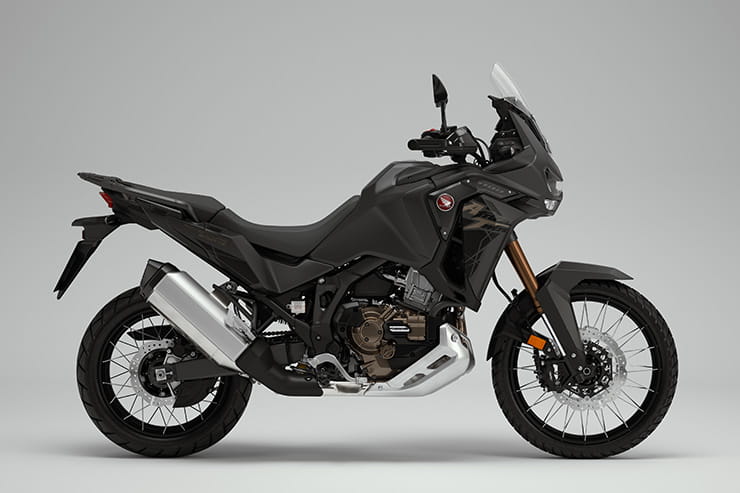 Moving to the Adventure Sports, the 2022 colours are more conventional. There’s no bright red subframe, for a start, and the ‘Cracked Terrain’ graphics are a fairly subtle update on previous years’ colours.

The Adventure Sports has only two colour options – tricolour or black – for 2022. The tricolour scheme is again a take on the traditional Africa Twin white, red and blue. As on the base version, the frame is white, but so was the 2021 version.  The two-tone, black-and-blue seat that’s new for the base Africa Twin was also already present on the Adventure Sport and remains for 2022.

The black version is subdued, with dark bronze graphics that match the colour of the fork legs and engine covers. 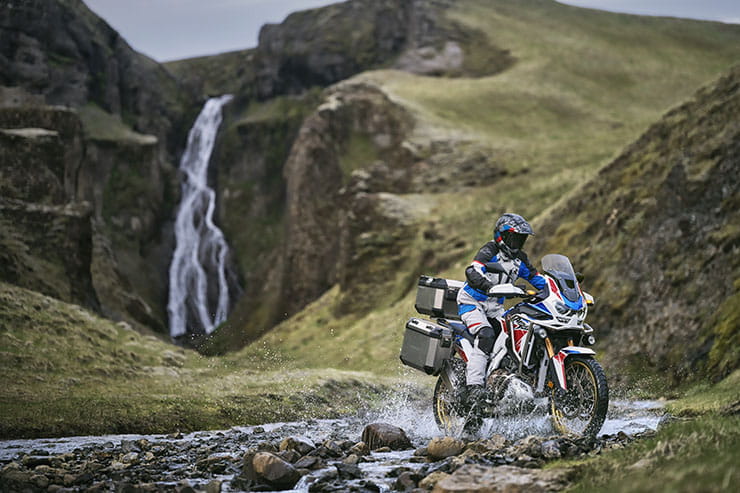 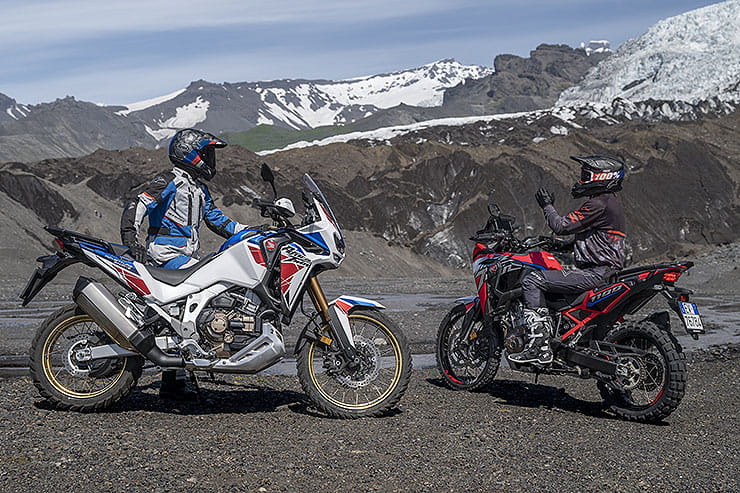 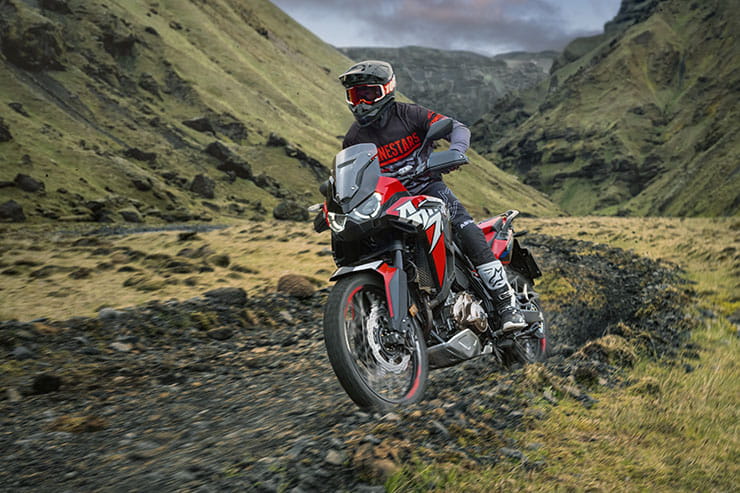 Apart from the minor tweaks mentioned, the bikes are technically unaltered, with the same 75kW (101hp) power output as last year, maxing at 7500rpm, and weights that start at 226kg (wet) for the base, manual Africa Twin, rising to 236kg for the DCT version, 238kg for the manual Adventure Sports and 248kg for the highest-spec, DCT Adventure Sport. As before, electronically-adjustable suspension is an option on the Adventure Sport, adding another 2kg to its weight.