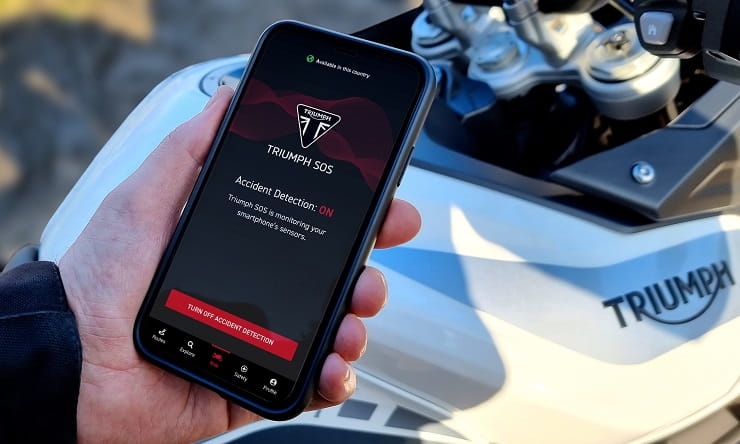 The new Triumph SOS app goes live on iOS and Android today with the promise of automatically alerting emergency services if a user is involved in a bike crash.

While it’s not the first auto-alert app to use the accelerometers and GPS in modern smartphones to deduce when there’s been an accident and send out an alert, Triumph SOS differs from most in that it’s been approved to contact emergency services directly rather than sending a message to a friend or relative. Not only that, but it does it in the UK, Europe, Ireland, North America, Australia and New Zealand, so even if you’re riding abroad or live in one of those areas, you can still use it.

It uses the built-in sensors in your phone to measure for the impact of an accident, then looks for the phone to remain stationary, showing that you’re not moving. If it hits the right combination of factors to trigger an accident alert, the app automatically sends a message including your position to emergency services. They’ll then attempt to contact you before dispatching an ambulance, helping to cut down on false alarms.  The also provides an option to cancel the emergency call before it’s made.

There’s nothing tying the app to your bike, and the developers – Realsafe Technologies, which also offer a similar ‘Real Rider’ app in the UK and Canada – say that the app does not record speed or send such info to the emergency services. What is sent, though, is information about your position, the direction of travel (important on dual-carriageways and motorways when dispatching help) details of your bike and any medical information that you’ve inputted into the app.

There is a monthly subscription to the service - £3.99 per month in the UK, €4.99 in Europe, $4.99 in the USA, $5.99 in Canada or $6.99 in Australia and New Zealand – on a rolling basis so it can be cancelled at any time. Triumph owners, however, get the first three months free by simply inputting their bike’s VIN into the app.

Although the app has to be running in the background during a ride in order to work, it doesn’t rely purely on the phone to send the information when there’s an accident. The system is cloud-based, so even if your phone is damaged in a crash, provided it survives long enough to register the impact and send that info to the cloud, then the process of alerting emergency services starts. It does have limitations, of course, including needing to have a phone signal.

The Triumph SOS app itself is free to download, although you’ll need to subscribe to start using it, and on the Apple App Store and Google Play now.