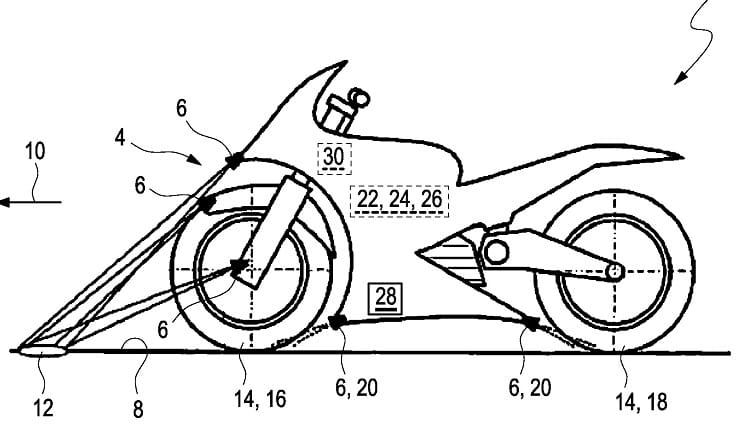 Modern traction control systems might be verging on witchcraft in their ability to react to slides and get a bike back under control but they all face one common problem – they’re reacting to a loss of grip rather than predicting it.

BMW’s latest patent shows the firm is working on a method to solve that, creating a system that looks at the road ahead to judge how much grip is available, setting the bike’s traction control and ABS systems to suit before it even reaches that piece of tarmac.

The single image in the patent, above, shows how multiple cameras are aimed at the road a few feet ahead of the bike’s front wheel, building a real-time, 3D image of the detail of the surface. Believe it or not, the idea is that the system can see how rough the road is, compare the images to reference values for similar surfaces and adjust the bike’s settings before the front tyre hits that patch of road.

What’s more, it’s a learning system. The setup also includes acoustic sensors aimed at the contact patch of the front and rear tyres, listening for changes in the sound that might reveal a loose surface or loss of grip.

Such is the complexity of the system that the control unit is also fed with real-time information including tyre pressures and tyre characteristics (tyre type will clearly impact grip as much as road surface), speed, throttle position, engine torque, steering angle, lean angle and braking force.

Don’t expect to see the system show up on a production bike in the near future, but the patent shows that despite the incredible abilities of the electronic safety aids on today’s bikes there’s still scope to make huge improvements in years to come.