Lifting the covers on Kawasaki’s 2021 range 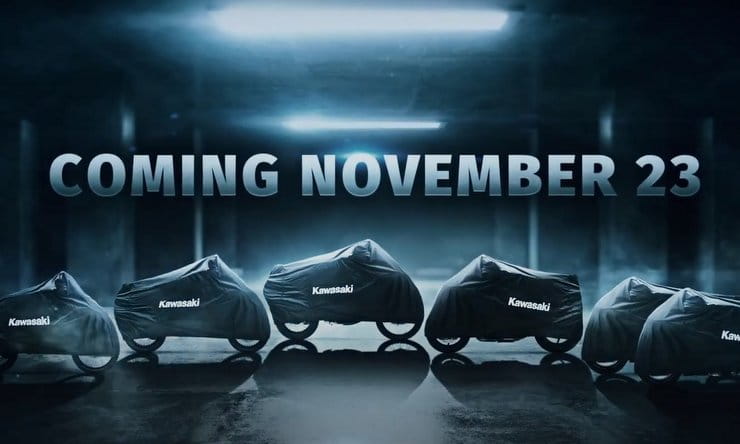 On 23rd November Kawasaki will be lifting the lid on six new models according to the firm’s latest US-market teaser campaign – and while the firm is keeping schtum about what they are we’ve donned our deerstalkers to do a bit of detective work on the images revealed so far.

At the moment, Kawasaki’s pictures show each of the six new models under a branded bike cover, revealing nothing more than the motorcycling equivalent of a glimpse of ankle. At best we get to see the bottom third of the wheels and a few of the components that hang below footpeg level, but even those small clues are enough to reveal what each of the new bikes could be.

Taking the machines in the same order that they’re seen in Kawasaki’s teaser video, the first (above) shares its lower third with the KLX250S that first appeared back in 2009. Knobbly tyres and wire wheels aren’t the only clue – we also get a matching silhouette under the cover, an identical wheelbase and, most revealing of all, the same rear brake disc and chain guard as the current KLX250S.

The cover means we can’t see whether there are updates to the bodywork, although it would make a lot of sense to tweak it a bit, but we can apply a bit of logic to the mechanical changes that might be applied. For 2020, Kawasaki launched the off-road-only KLX300R trail bike, based on a big-bore version (78mm vs 72mm) of the KLX250 engine and a similar chassis. A road-legal enduro version – presumably called the KLX300S – makes a lot of sense as a new 2021 model.

The next bike to emerge in the teaser video (above) comes along with a glimpse of race track, but the image shows a tall, wire-wheeled bike.

What is it? The visible lower third is a perfect match for the existing D-Tracker X supermoto. That makes a lot of sense, as the D-Tracker X is simply a supermoto version of the KLX250S, with 17-inch wheels and sticky, road-oriented rubber instead of knobblies, plus bigger brakes to make the most of the extra grip. If the first bike in Kawasaki’s teaser video is an updated KLX250S, perhaps hiked to 300cc, then it’s a logical step for the firm to create a supermoto D-Tracker version as well.

As with the KLX, the few elements that are visible in the teaser, including the wheels, brake discs, chain guard and a glimpse of the suspension linkage, all perfectly match the existing D-Tracker’s parts.

Moving along, the next bike to be shown in the Kawasaki teaser video is actually two identical-looking machines – both under covers, of course – along with a snatched glimpse of race track.

These are the easiest to match; they’re Kawasaki’s 2021 ZX-10R and the higher-spec, homologation-special ZX-10RR. As you can see in the video grab above, compared to the existing 2020 ZX-10R, the visible sections of the wheels, brakes and exhaust are identical to the current bike – suggesting we’re looking at a tweak rather than an all-new machine.

There may be some bodywork changes, though, and there are sure to be technical updates to further improve the ZX-10R’s abilities and to try to ensure that it can be ridden to yet another WSBK title in 2021.

Here’s an intriguing one. The fifth bike of Kawasaki’s planned six debuts shares its lower section with the new-for-2020 Z H2 supercharged naked model, leaving no doubt that this is another boosted four-cylinder machine. But how will it sit in the growing H2 range?

The shape of the nose under the cover suggests the proportions are similar to the Z H2. If this was a fully-faired model like the Ninja H2 or H2 SX we’d expect the front fairing to extend further forward. Our guess is that this will be an additional Z H2 model, perhaps a higher-spec ‘SE’ or ‘Carbon’ model, as seen in the H2 SX and Ninja H2 ranges.

Finally we come to the sixth and last new model in the 2021 Kawasaki teaser – and it’s clearly a wire-wheeled adventure model.

In fact, while this is the headline machine in Kawasaki’s new-for-2021 line, the lower section is a dead ringer for one of the oldest bikes in the company’s range, the KLR650. The curve to the bash plate under the engine is identical, as is the visible part of the chain guard and even the two bolts that hold the footpeg bracket – showing that the frame is basically unaltered.

As with all the bikes in Kawasaki’s teaser, we need to add the proviso that the machines under the covers might not really be the firm’s 2021 models. Kawasaki might have thrown sheets over existing machines instead to approximate next year’s range. But taken at face value it’s clear that this is the existing KLR650, presumably with updates to bring it into the 2020s. The current version dates back to 2008, so it’s not before time.

Rumours earlier this year suggested Kawasaki was developing a KLR700 for 2021 to compete with Yamaha’s Tenere 700. The capacity might be on the money, but from the look of this picture the next version will still be a single-cylinder dual-sport rather than a twin like the Yamaha.