Kymco’s new models for 2021 show the firm isn’t afraid to stray from convention as they include a tilting trike, a 360cc adventure scooter and a near-70mph electric scoot.

Of the three, the electric ‘F9’ model is perhaps the most intriguing. It might not be the mass-produced version of last year’s RevoNEX electric motorcycle concept that the firm has been promising will reach production in 2021, but it’s still more convincing than the average battery-powered machine.

Breaking with expectations that electric bikes are inevitably heavy, the F9 weighs in at a mere 107kg, thanks to a chassis that uses the battery as part of its structure. The motor is a 9.4kW unit (12.6hp), roughly on a par with a 125cc petrol bike, fitted in the back of the chassis. It drives the rear wheel via a belt that leads to a two-speed auto-shifting transmission mounted next to the rear wheel, on the end of an unusual rear suspension setup made up of two parallel, single-sided swingarms.

The F9’s 96V, 48Ah battery weighs just 17kg and the firm claims a range of 75 miles on a charge. Recharging takes only 2 hours using a fast-charger.

As well as the impressive top speed of 68mph, the typically strong torque of the electric motor – peaking at 22lbft – means the F9’s acceleration is sprightly, too, with 0-30mph achieved in 3 seconds. Honda might have started a trend with the X-ADV, as Kymco’s next new model is the DT X360, a scooter that the firm describes as an ‘adventure crossover’.

Featuring a 28.4hp, 320cc, four-stroke single, the DT X360 makes 22lbft of torque – the same as the F9 electric – and weighs in at a relatively hefty 194kg wet. Apart from the addition of hand-guards and deep-treaded tyres, it’s a fairly conventional maxi-scooter, with an engine-in-swingarm design and relatively small wheels – 14in at the front, 13in at the rear.

More unusual is the Kymco KRV, below, which might look like a fairly normal scooter but features a motorcycle-style rear suspension setup, with the engine mounted in the chassis, a separate swingarm and belt drive to the rear wheel. It’s powered by a 175cc single, making 16.5hp, and weighs 133kg. Kymco’s CV3 tilting trike scooter has been doing the rounds of shows in various concept guises since back in 2017, but in 2021 it finally joins the firm’s range of production models.

The tilting front suspension setup is much like the design used by Yamaha on the Tricity 125 and 300 models, with two telescopic fork legs for each front wheel. Like the DT X360, it has a slightly adventure-style look, with deeply-treaded tyres and a beaked front end design. 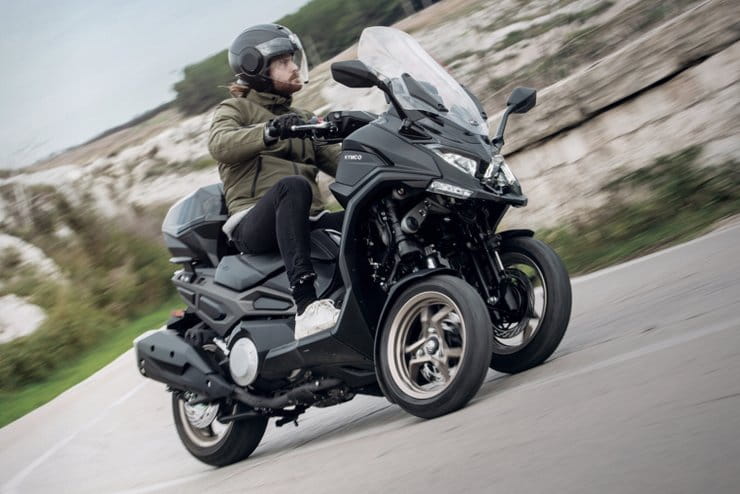 So what of the most exiting bike that Kymco showed us last year, the all-electric, 127mph RevoNEX? Twelve months ago, the firm said it would reach production in 2021.

While there was no official word on the RevoNEX at the presentation of the firm’s 2021 scooters, Kymco showed it in a new black, grey and fluorescent yellow colour scheme, with a couple of changes compared to last year’s concept version. The concept’s Brembo front brakes, for instance, are swapped for Kymco-branded calipers, and there are detail alterations to parts like the mirrors. Hopefully an official announcement about the production plans for the RevoNEX is coming soon. 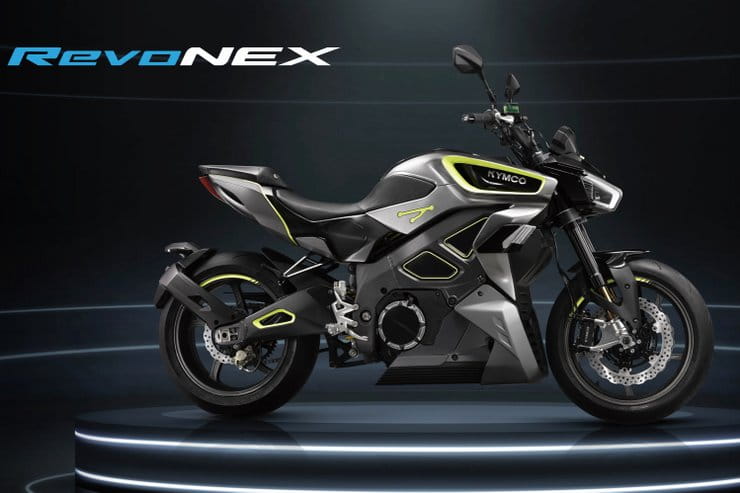