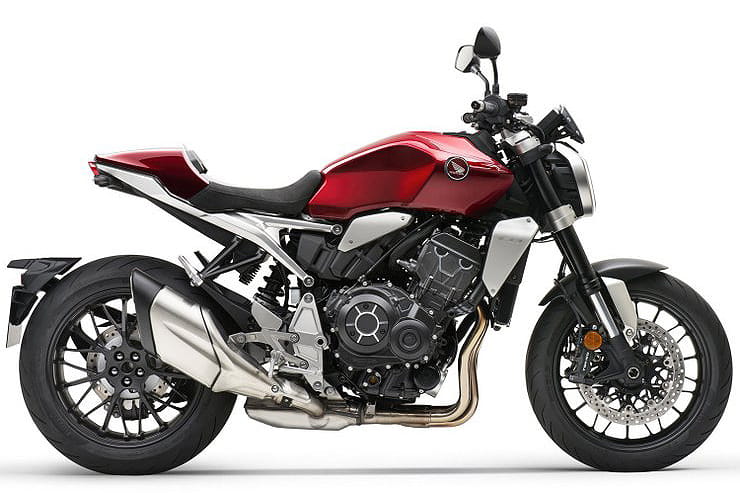 It was only three years ago that Honda introduced its ‘Neo Sports Cafe’ styling theme on the CB1000R – mixing classic cues with a modern stance and details – but already the firm is evolving the CB1000R into a new generation for 2021.

Although the new model shares its chassis and Fireblade-derived 998cc four-cylinder engine with the previous version, the styling has been subtly tweaked to reflect a selection of technical changes that bring the bike into line with modern emission rules and technological expectations. 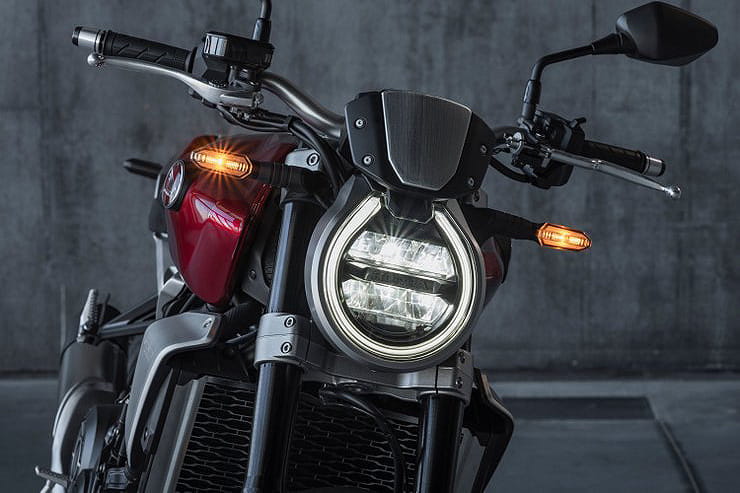 The oversized circular LED headlight was one of the 2017 Neo Sports Cafe concept bike’s key features, and it carried over into the production CB1000R in 2018. For 2021 the same idea is evolved, retaining its hoop of DRL lights around the edge and horizontally-split main lamp but takes on an aerodynamic slant while folding over at the top like one of Salvador Dali’s melting clocks.

Below it, the aluminium radiator shrouds are new, with a shorter, forward-tilted style, and the matching side covers over the airbox are reshaped for a less overtly retro style.

Further back there’s a new cast-aluminium seat subframe with a bare alloy finish, and a smaller licence plate bracket mounted on the single-sided swingarm. New wheels with seven spokes at the hub that each split into three as they near the rims – giving the look of 21 separate spokes – are another notable styling change. 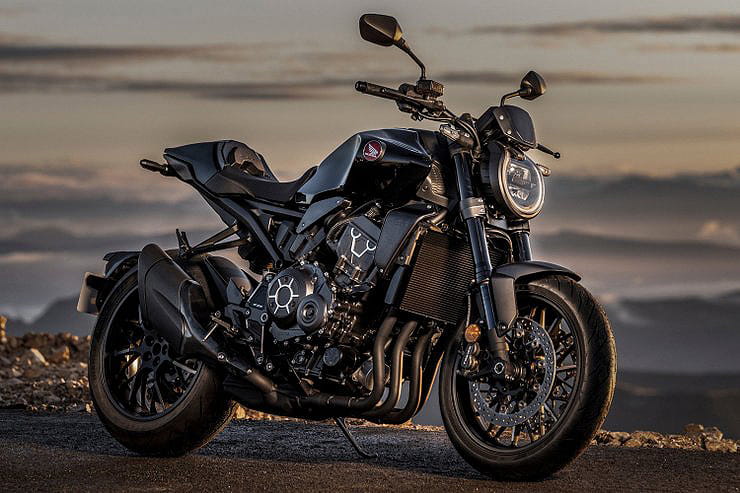 If you want a more significantly new look for your 2021 CB1000R, there’s the new ‘Black Edition’ model which gains an array of changes to suit its moniker.

The black theme is extended across the whole bike – the headlight ring, radiator cowls, side panels, subframe, fork clamps, bars, levers and exhaust are all finished in the colour – with the exception of machined alloy highlights on the wheel spokes, swingarm plates and engine covers. The Black Edition also gains an array of extras as standard including a pillion seat cover, fly screen and quick-shifter 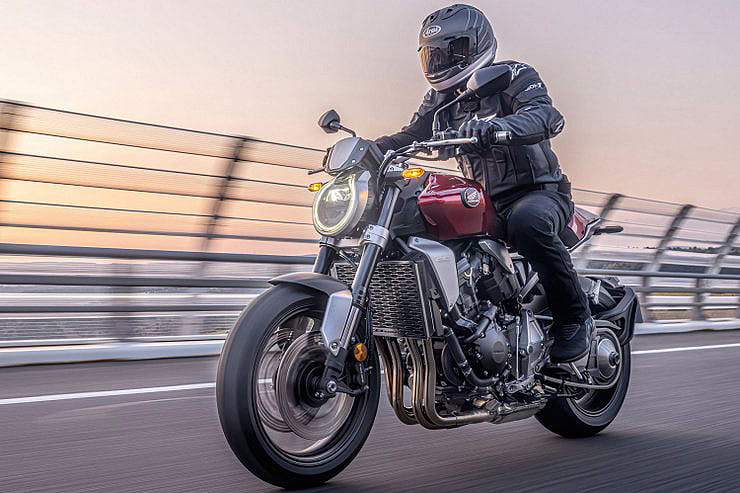 On the engine the only changes are a revised exhaust, reworked fuel injection settings and new linear air flow sensors in the exhaust instead of oxygen lambda sensors. All work to give make the bike Euro 5 compliant without any loss in performance compared to the old version. Peak power is unchanged with 143.5bhp (107kW) at 10,500rpm, and it’s the same story with the maximum torque, 77lbft (104Nm) at 8250rpm. The riding modes are also unaltered, with four options – Rain, Standard, Sport and User – available, each altering the power delivery, traction control setting and engine braking.

There are no chassis changes, either, with the same steel backbone frame and aluminium swingarm pivots as before and no changes to dimensions or geometry. The suspension – Showa SFF-BP forks and a matching rear shock – and Tokico radial calipers are also carried over from the existing model. 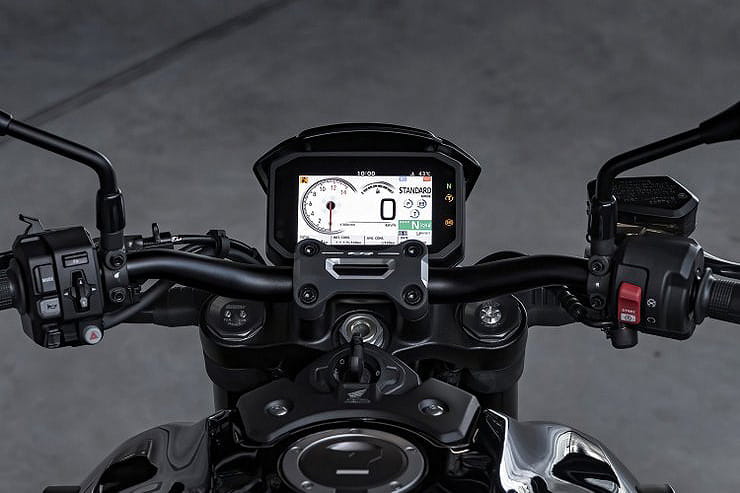 What is new is the colour TFT instrument pack, replacing the old LCD unit. While relatively small at 5in, it offers four display layout options, riding mode parameter readouts and a shift indicator, with bar-mounted controls to make changes. Honda’s ‘HSVC’ smartphone voice control system links your phone to the dash via Bluetooth and provided you’ve got a helmet headset provides voice operation for navigation, music, emails and calls. An under-seat USB socket means your phone can be charged as you ride, too. Like other 2021 Hondas including the X-ADV and NC750X, there’s also a new emergency stop system that flashes the rear indicators under hard braking to warn vehicles behind, and the indicators are now self-cancelling.

We’ll update you with details on pricing on the standard version plus availability as soon as we get that information. 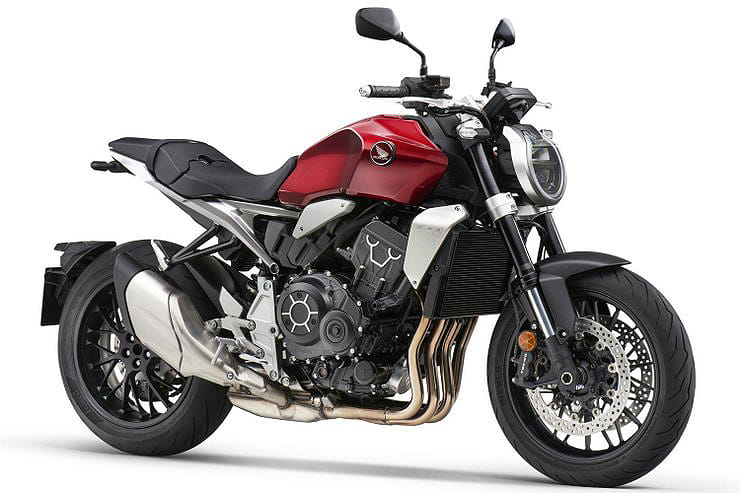