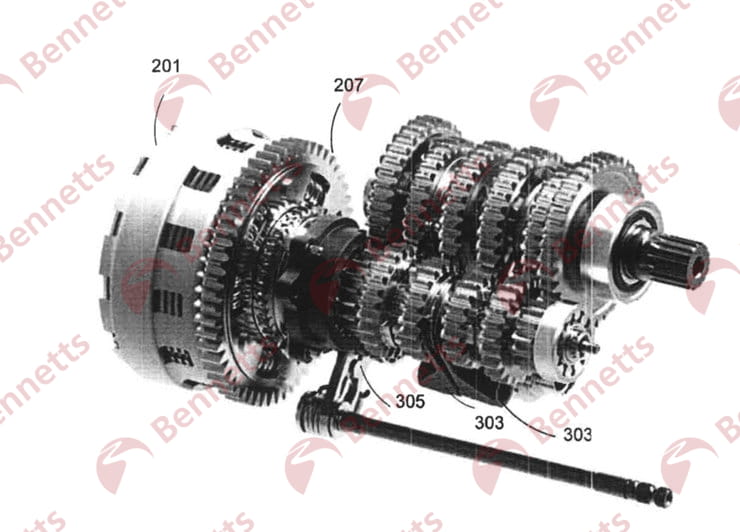 Every bike on the MotoGP grid now uses a seamless-shift transmission that allows riders to bang through ratios without even a momentary interruption in torque delivery – and just as traction control, winglets and quick-shifters have migrated from race to road it’s inevitable that future showroom superbikes will also get seamless transmissions.

However, there are a couple of spanners in the works currently preventing the race technology’s transition to the street. First, each MotoGP manufacturer still closely guards the secrets of its seamless-shift transmission. Second, the race gearboxes are terrifyingly expensive. But the march of progress means those issues are being chiselled away and we could soon see the first production bikes to offer a true MotoGP gear-shift experience.

In recent years Ducati, more than any other brand, has worked to make its MotoGP machinery relevant to the road. It was in the vanguard of aerodynamic downforce with its be-winged Panigale V4 R and, since last year, the mass-made Panigale V4 and Streetfighter V4. The V4 engine itself is more closely related to a race bike’s than any of its rivals’ offerings, with a reverse-rotating crankshaft and a host of other similarities to the works racers.

Now the firm has filed a patent application that gives a close look at the technology the firm is working on to bring seamless-shift transmissions to mass production. 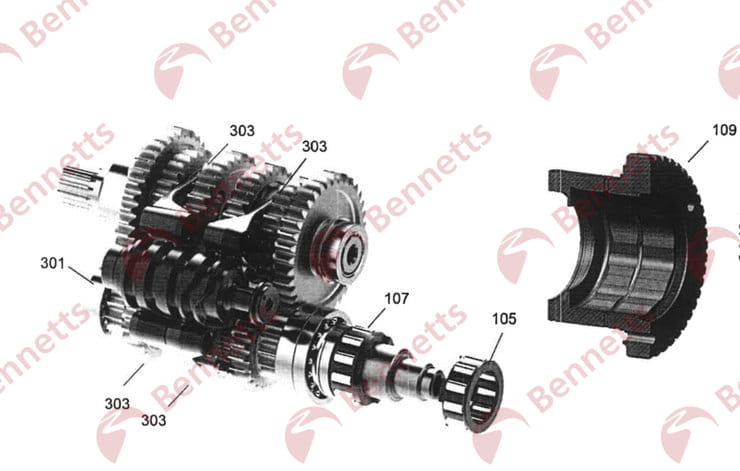 The transmission in question bears more than a passing similarity to the only seamless transmission that’s already in mass production – Honda’s ‘DCT’ Dual Clutch Transmission, as used since 2009 in bikes like the VFR1200, Africa Twin and the NC750 models.

Honda’s transmission is more comfort-oriented, and would be illegal in MotoGP where the rules specifically ban dual-clutch boxes, but it offers a ‘seamless’ shift by effectively combining two gearboxes into one. The transmission’s input shaft is split into two halves – one carrying 1st, 3rd and 5th gears, the other bearing 2nd, 4th and 6th. With a separate clutch for each half of the input shaft, two gears can be engaged at the same time, and by juggling the operation of the computer-controlled clutches the DCT box can make seamless shifts with no break in the power delivery.

Ducati’s system is like the Honda one in using a two-piece input shaft, but manages seamless shifts with just one clutch – so it’s legal in MotoGP – and without the need for any electronics or hydraulics. It’s purely mechanical, operated just like a normal bike gearbox but with the ability to make perfect up- and down-shifts without any interruption in the torque delivery.

Like Honda’s DCT, the ‘1st/3rd/5th’ (odd) half of the input shaft is actually a full-length shaft, while the second section is a sleeve that slides over it on the end nearer the clutch and carries 2nd, 4th and 6th  (even) gears.

Instead of taking drive from the engine directly to the input shaft, as on a normal bike, the clutch connects to an ‘input hub’ that sits over the right hand end of the input shaft. It transmits torque to either one of the two halves of the shaft via two lockable roller bearings.

In the photo above you can see the transmission in a partially disassembled state. The part labelled ‘109’ is a cutaway of the input hub, while ‘107’ is the lockable bearing on the end of the 2nd/4th/6th (even) shaft and 105 is the lockable bearing that goes on the 1st/3rd/5th (odd) shaft. The picture below shows the gearbox disassembled further, with the two input shafts separated so you can see how the half carrying ‘odd’ gears runs inside the one with ‘even’ gears. 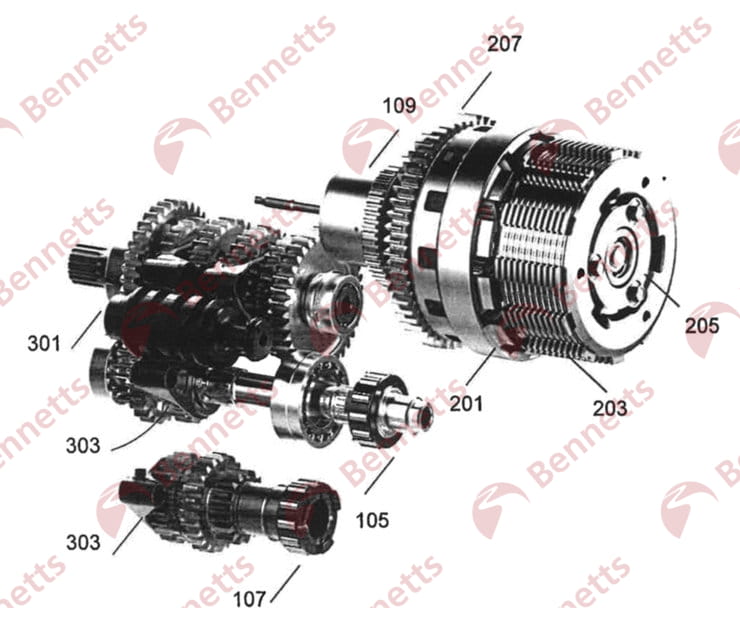 Disassembled, you can see the transmission’s two separate input shafts and single clutch

The lockable bearings and the input hub that acts on them are the key to the Ducati transmission’s abilities.

The gears themselves are shifted like a normal bike’s, with a selector drum operating shift forks to engage the gears. But unlike a normal bike, which can only engage one gear at a time, the Ducati’s selector drum is designed to briefly engage two simultaneously. So as you shift up from 1st to 2nd, it engages 2nd before disengaging 1st. Because of the split input shaft and the way the input hub acts to lock and unlock the lockable roller bearings, the design means 2nd gear (and the ‘even’ input shaft) will take up drive, taking pressure off the lockable bearing on the ‘odd’ input shaft so its rollers can spin and disengage the shaft from the input hub. Shifting down through the box, the same thing happens in reverse.

It’s a purely mechanical system that doesn’t even add a vast number of components when compared to a conventional transmission and as a result – as Ducati’s own patent document says “it is possible to realise a seamless gearbox mechanism integrated into a traditional gearbox, suitable both for mass production and racing.” 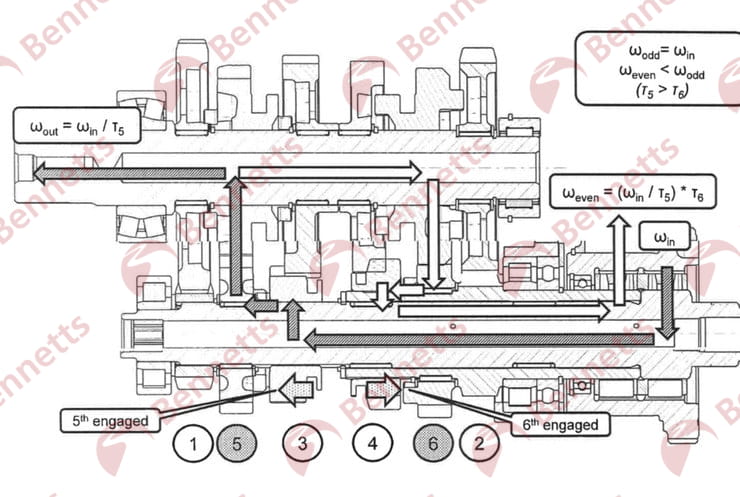 Do you really need a seamless shift transmission on your way to work or the shops? Of course not. No more than you need aerodynamic winglets or a 200hp engine. However, in any type of track use a seamless box promises to come into its own, and Ducati’s system is vastly simpler – and hence more compact and lighter – than Honda’s DCT, which adds 10kg to every bike it’s fitted to in its current form. The Ducati box lacks the Honda design’s ability to operate by pushbuttons or in an automatic mode, still requiring exactly the same foot operation as a conventional transmission, but for riders who want to get ever closer to the real MotoGP experience, that’s arguably a plus point rather than a drawback.

While the existence of a patent alone is far from concrete evidence that any design will reach production, it’s intriguing to see that Ducati has used photographs of a real transmission in its document rather than just drawings. This is clearly something Ducati has developed at least to the stage of having a working prototype, and it has decided the design operates well enough to be worth patenting.