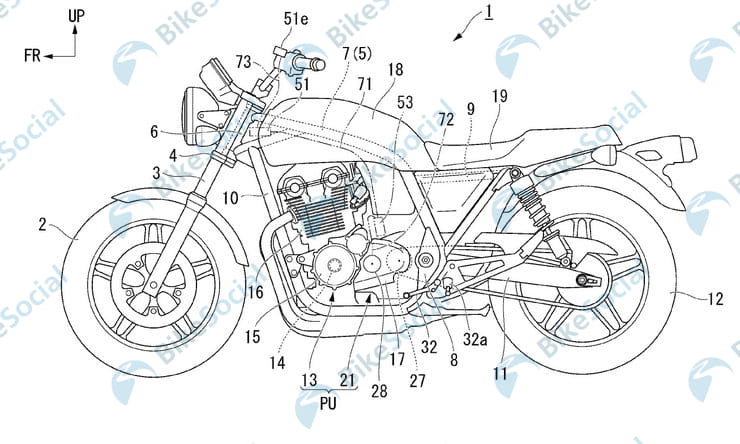 Honda has led the way towards automated bike transmissions with its complex and advanced DCT twin-clutch designs but decades ago the firm was already offering a semi-auto in the form of its Hondamatic gearbox.

Now the firm appears to be reviving the idea, having filed patent applications for a new semi-automatic transmission that eliminates the clutch lever but is mechanically far cheaper and simpler than its DCT design. 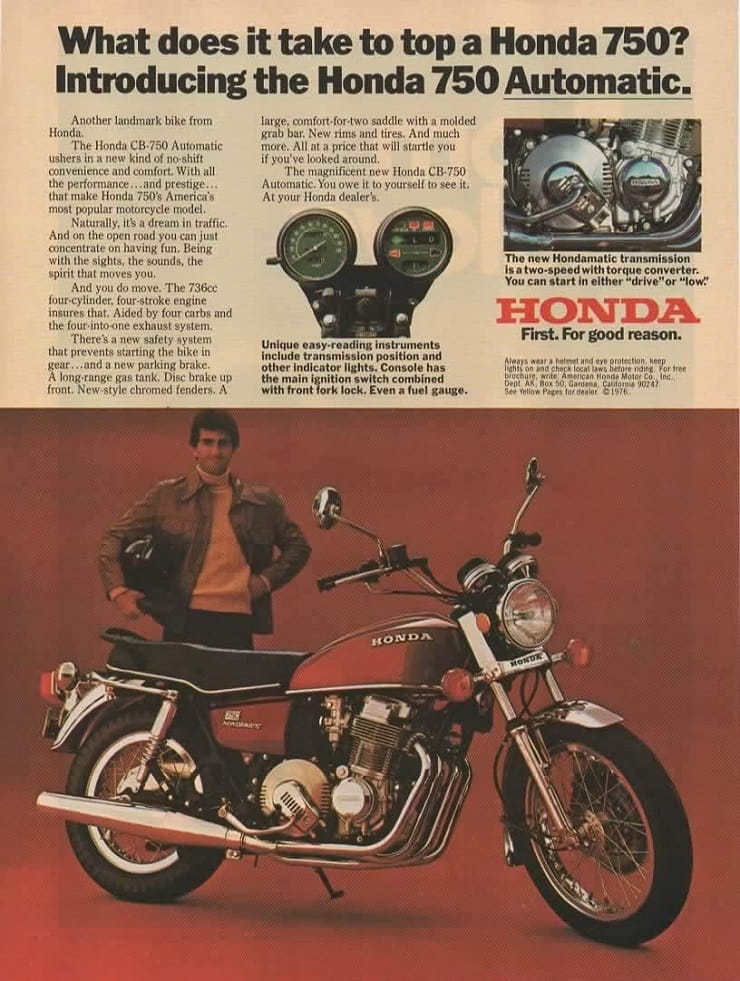 Debuting in 1976 on the CB750A, the Hondamatic transmission was a two-speed gearbox with a conventional-style foot-operated shifter but no clutch lever.

That control layout is replicated on the new designs, fittingly illustrated on a CB1100 – the CB750’s direct descendant – for Honda’s latest patents. However, it’s mechanically both simpler and more effective than the 1970s Hondamatics.

The old Hondamatic used a torque converter, normally reserved for automatic cars, to connect the engine to the gearbox instead of a conventional clutch. Although effective, it sapped a lot of power and, allied to the fact the transmission had just two gears, put a significant dent in performance.

The new system has no such compromises. Instead it basically uses a conventional six-speed gearbox allied to a modern up-and-down quickshifter and a computer-controlled system that engages and disengages the clutch when you’re pulling away or stopping.

It’s still far simpler than the DCT system, which has unique gearbox internals and twin clutches allied to electronic shifting to give seamless shifts, and with relatively few new components the latest design could easily be fitted to existing bikes without major alterations. 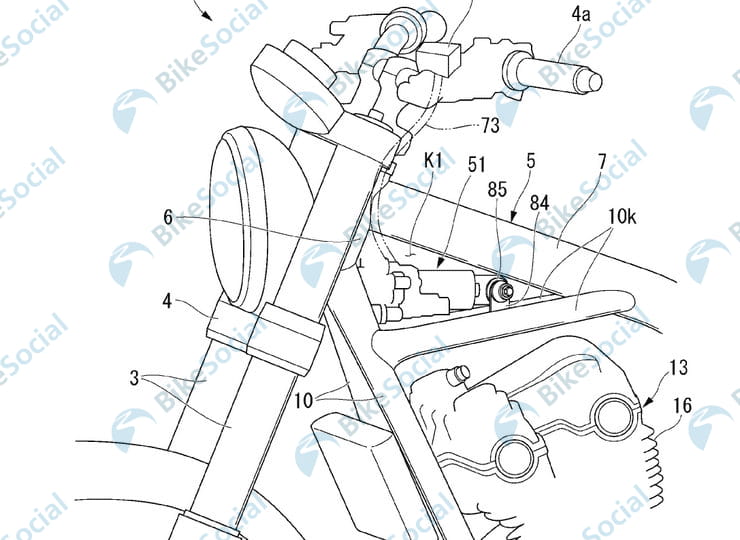 Actuator is mounted just above the engine, hidden under the tank

The main components are an actuator mounted just behind the steering head and a valve unit mounted on the transmission by the slave cylinder.

The actuator is basically the clutch master cylinder modified to use an electric motor to build clutch fluid pressure rather than a hand-operated lever. It even retains the normal bar-mounted fluid reservoir for easy checking and filling.

One big difference to a conventional bike is that on the new design, fluid pressure is used to engage the clutch rather than to disengage it. That means if there’s a loss of pressure, either due to a hydraulic problem or an electrical one, the clutch will disengage and leave the bike freewheeling, which is clearly safer than failing in a state where the clutch is engaged.

The valve unit includes an electric solenoid-operated valve that closes the hydraulic circuit once the clutch is engaged so the actuator doesn’t need to constantly maintain pressure. It also means the clutch can be disengaged instantly by shutting off power to the solenoid, allowing the valve to open. 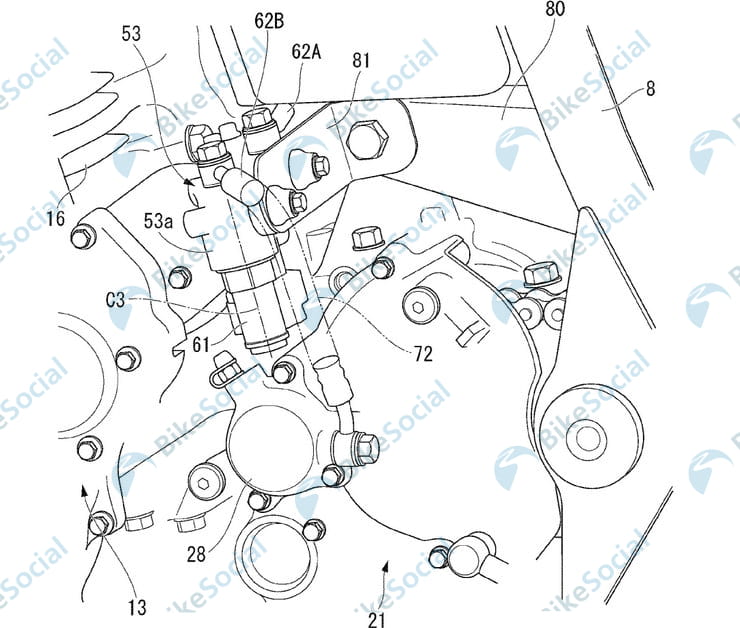 Valve unit is simply bolted to the side of the engine

The system is mainly intended to be used for starting and stopping. On the go, it’s connected to a conventional up-and-down quick-shifter and throttle blipper, of the same type that’s becoming increasingly common on modern bikes. These use a combination of sensors including a load sensor on the shift pedal, a gear position sensor, speed sensor, rpm sensor and throttle position sensor to gauge the precise time to momentarily cut the ignition during upshifts and to add a throttle blip on downshifts, creating a super-quick, clutchless gear-change from an otherwise conventional transmission.

Honda’s design also has the option of disengaging and reengaging the clutch automatically during shifts to make them smoother and slicker, but the main purpose is to create a smooth engagement as throttle is applied in first gear to pull away from standstill. 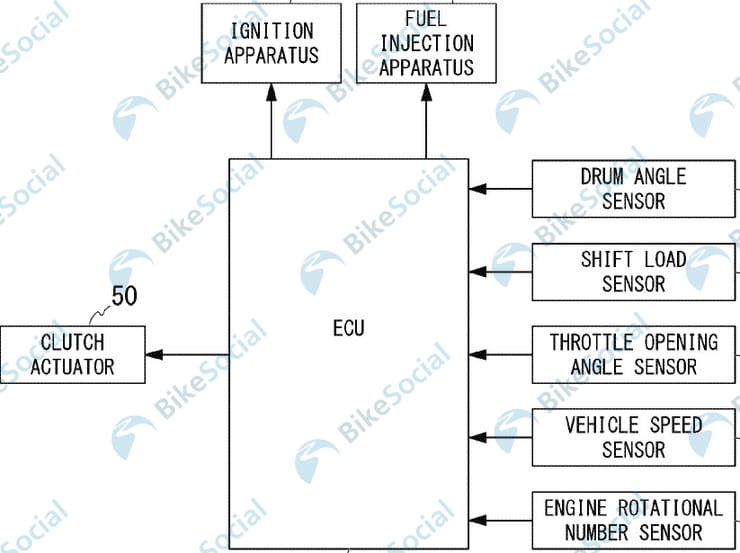 While the patent clearly shows the system fitted to a CB1100, which is perhaps fitting since the original Hondamatic emerged nearly 45 years ago on the CB750, but significantly the components it are simple and externally-mounted, which means the same parts could easily be bolted to virtually any motorcycle provided it has the right array of sensors and an electronically-controlled throttle.

So where Hondamatic and its DCT descendant could only be fitted to specific models that were subject to a significant redesign, the new idea could be as easy to fit – or even to retrofit – as a quick-shifter.  Allied to the familiar foot-operated gear lever, that might be just the trigger that’s needed to make semi-automatic shifting accepted by the motorcycling mainstream.