Coronavirus | Top 10 ways to still get your biking ‘fix’

While the current coronavirus emergency may be having a massive effect on all of our lives, we don’t have to let it completely take away our biking ‘fix’.

The ban on all but essential travel may mean an end to conventional motorcycling and a devastated sporting and events calendar has deprived us of spectator events and activities to watch, either in person or on screen. But that doesn’t mean there’s nothing that be done, watched or become involved with that should, at least in part, satisfy your motorcycling cravings until this crisis period is over.

Nor does that mean simply binge-watching old episodes of Boon or mournfully venturing into the garage to give your bike a pat and a preen. No, thanks to the latest media developments, the current wealth of online resources, new bike-centric gaming, extra ways to enjoy and improve and modify your pride and joy not to mention old ‘favourites’ such as books, movies and even models, there’s plenty of ways for biking fun within the confines of your own home – and more than you might have assumed as well.

But which is best? And which might appeal most to you and your particular interests. To help you choose and also give you some surely welcome extra ideas for ways to while away the weeks and months, here are our 10 best ways to satisfy your motorcycling itch – and some of them don’t even cost a penny. After all, you might need those to stock up on loo rolls! 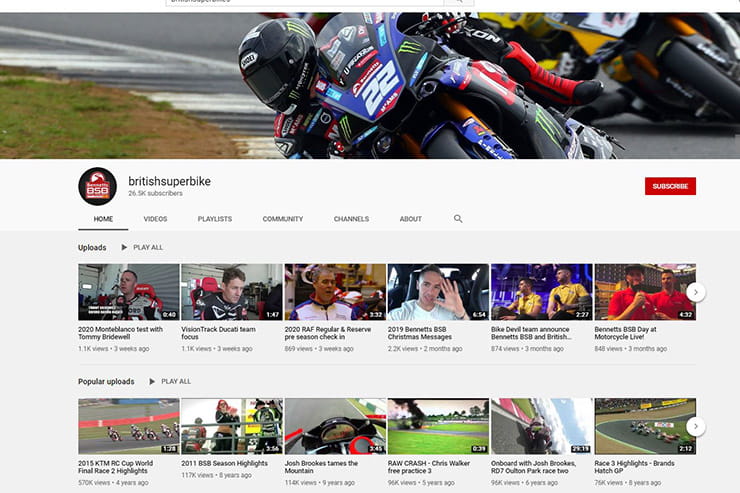 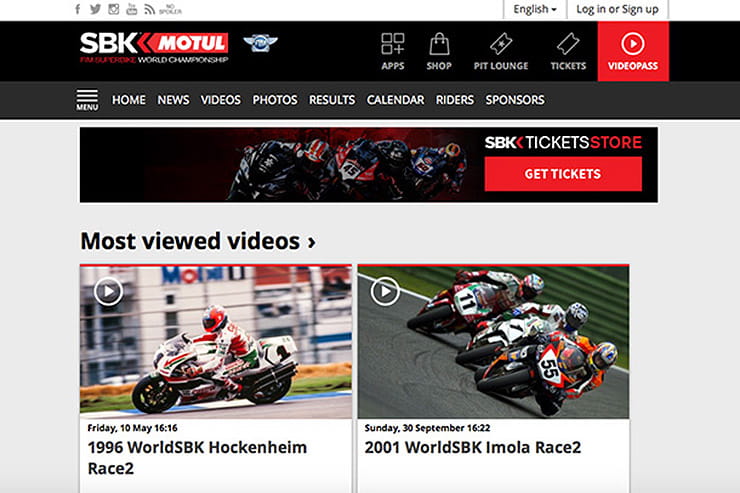 OK, so the bikesport season is on hold, which is gutting whether your favourite form of two-wheeled racing is MotoGP, BSB or off-road. But you might be surprised to learn there’s a wealth of action of all types available on-line, for free – and it’s actually growing all the time. MotoGP fans should checkout the official website where there’s an increasing catalogue of free-to-watch videos, both of classic races, documentaries and behind-the-scenes features. It’s a similar story for the Bennetts supported BSB series. Go to https://www.youtube.com/user/britishsuperbike and you’ll find the latest videos from the pre-season tests, previews and more. There’s similar videos of classic WSB races at https://www.worldsbk.com/en/videos and all of that’s before you start searching through the whole bikesport soup available on YouTube.

Between 22nd - 27th March, Eurosport will waive their online Player subscription fee and show 22 hours of Bennetts British Superbike coverage from the 2019 season. 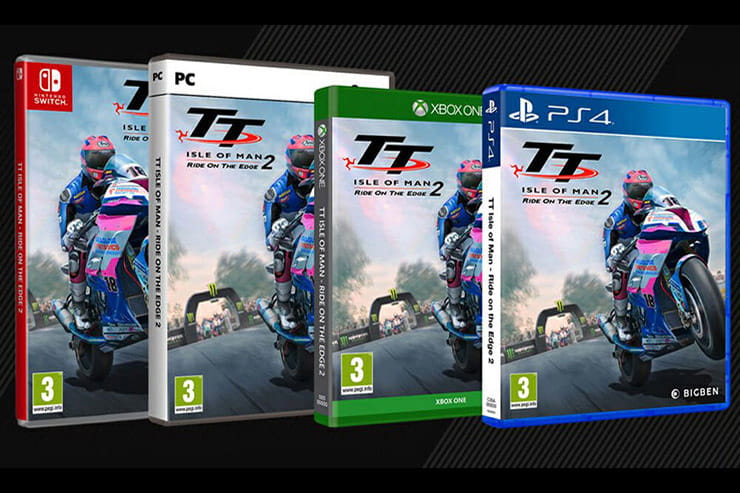 Get your speed kicks with the latest video games

We understand that computer gaming might not be for everyone. But even those who think an Xbox is for casting your vote in a polling station or people who’s last experience of electronic gaming was something called Simon in the 1970s (look it up) should take a moment to take in how amazing the latest motorcycling rider-simulation games are – and the latest has handily come out this very week. Adding to old, well-known favourites such as MotoGP, WSB’s SBK, MXGP for motocross fans and the more generic Ride, there’s also a brand new TT-themed game, for all the usual major consoles (XboxOne, PS4, Nintendo Switch and PC) which promises the best TT simulation yet. It’s called TT Isle of Man – Ride on the Edge 2, has been developed by KT Racing, a French company that specializes in motorsports video games, and promises the most realistic bike behaviour yet. It’s out this month for just under £50. 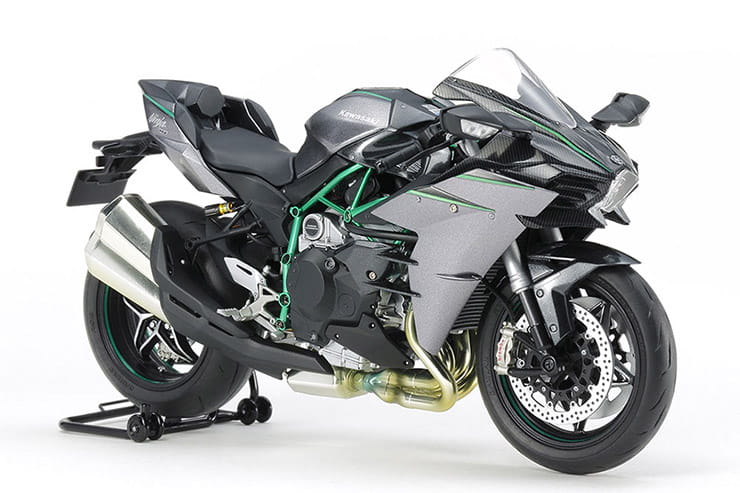 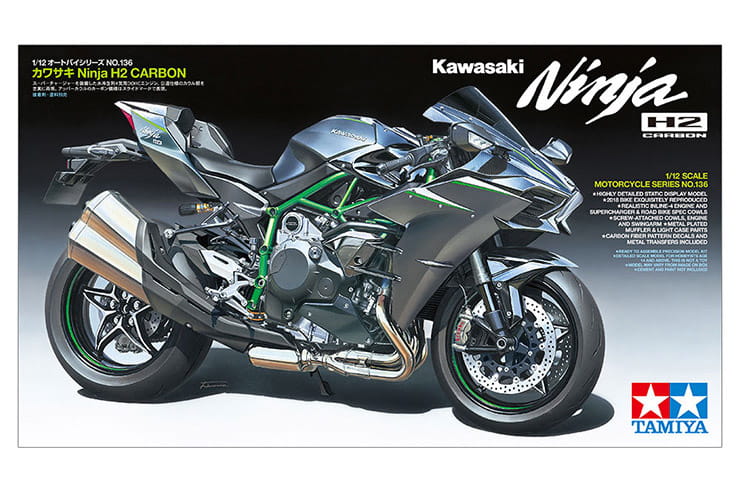 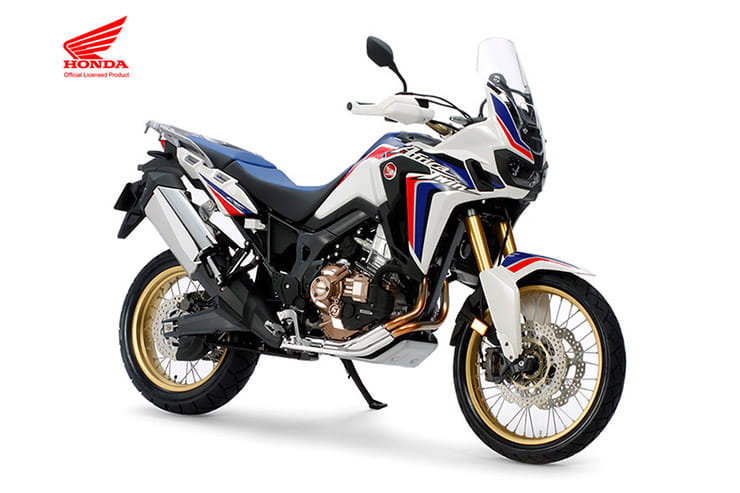 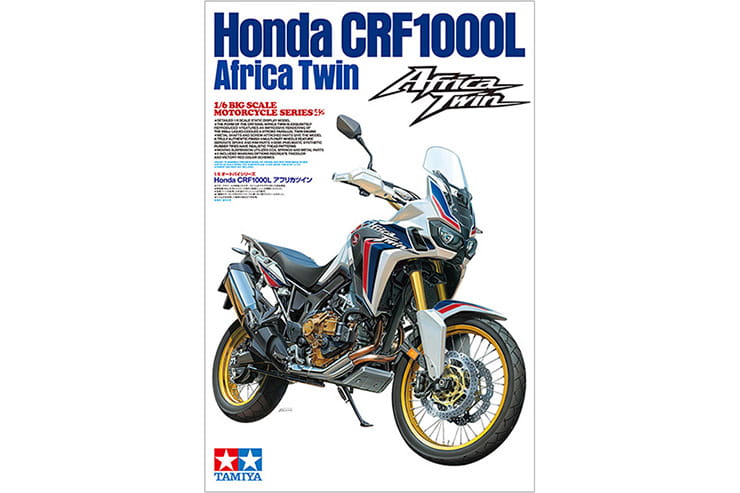 Build your own Ninja H2 – or Africa Twin

Yes really – well, sorta. We’re talking plastic models, here, the sort of thing you’d normally indulge yourself with at Christmas but which, under the current conditions, seems just as valid – and you’ll be amazed at the quality of the latest offerings. If you haven’t done a plastic model since that Airfi

x Spitfire when you were a kid – look again. And the best place to look, by our reckoning, is at the range of Japanese wizards Tamiya here https://www.tamiya.com/english/e-home.htm. Two of their most recent models stand out: the new, 1/12 scale Kawasaki Ninja H2 Carbon which is not only gorgeous and beautifully made (as perhaps it should be for around £37) but, let’s face it, is probably the closest you’ll get to owning the real thing while at the same time helping quench your biking urges; and, even more substantial, impressive and, it has to be said, taxing to build, its massive 1/6th scale Honda CRF1000L Africa Twin, complete with screws, cables, rubber tyres, metal-plated silencer, moving rear suspension and more, which, at a whopping £188, is nothing less than you deserve. 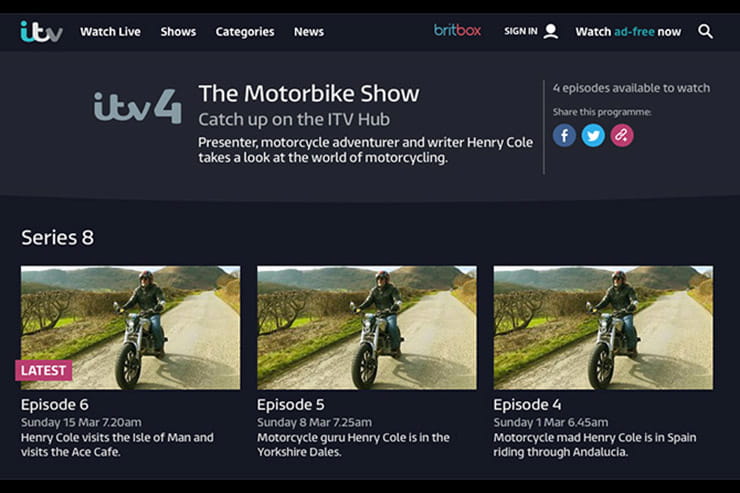 Catch up on the biking TV you’ve missed

Simply turning on the box and vegging out in front of the usual rubbish available on TV might seem like a rather lame suggestion – but there’s more to it than that, depending on the TV package you have. Shows like Henry Cole’s The Motorbike Show are fairly readily available, as is his World’s Greatest Motorcycle Rides; Eurosport regularly shows highlights or reruns from the likes of WSB and roads racing; Amazon Prime, if you’re a subscriber, has plenty of classic TT action including the brilliant TT. What’s more, all of its available without even having to leave your sofa which means that right now, under the current lock-down, provides the perfect excuse to catch up on the classic motorcycling TV you might have missed. 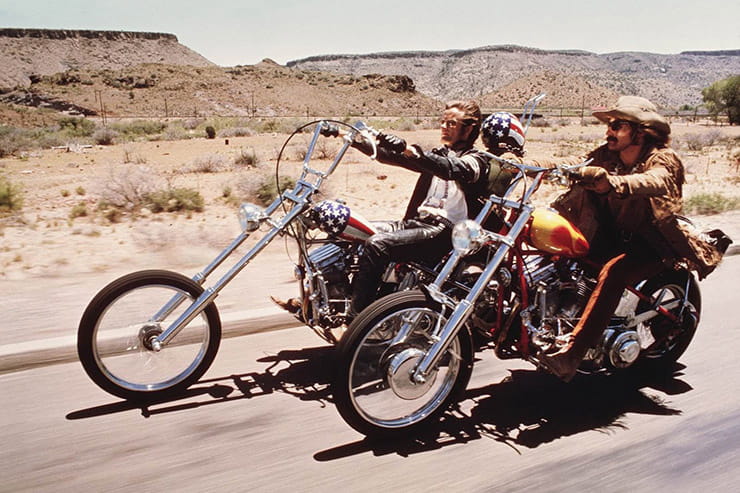 Watch the classic biker movies you never got round to

It’s perhaps inevitable that a good chunk of our suggestions are based around the ‘gogglebox’ sitting in the corner of your front room – but that’s simply because there’s so much biking entertainment available through it.

Beyond the biking documentaries, bikesport re-runs and motorcycle magazine shows available on TV now perhaps might be the best opportunity you’ll get to treat yourself to a watch of those ‘classic’ biker movies you’d either long promised yourself or simply forgotten were so, er, good. Never got round to the drug-fuelled hippy weirdness of Easy Rider? Now’s that time. Or what about Marlon Brando’s revolutionary 1950s bike gang flick The Wild One? Or Anthony Hopkins as Burt Munro in The World’s Fastest Indian, Robert Redford in Little Fauss and Big Hallsy or if you simply can’t resist some cringe-worthy cheese, don’t forget Viva Knievel and Britain’s own Silver Dream Racer. Go on, you know you want to…

Admittedly, spring has sprung and most of us would normally have already ‘de-hibernated’ our bikes by now ready for a season of biking ahead. But there’s also no denying that, seeing as the lock-down has happened now, we all might as well use the opportunity to get our machines perfectly prepared for when we can actually get back out on the roads. Besides, there’s a definite sense of satisfaction and achievement in returning your pride and joy to tip-top condition. Bennetts BikeSocial already has plenty of bike maintenance advice, right here.

You’ll find it worthwhile to go the extra yard in terms of cleaning, lubrication, checking the operation of all controls; fine-tuning the position of levers, bars, foot controls and mirrors; checking the routing of all cables and hoses; re-inspecting tyres, chain, brake pads and so on; topping up the levels of all fluids and so on.

Once upon a time, nirvana, when it came to biking accessories, was as unsophisticated as poring over an M&P catalogue and trying to imagine how certain parts would look on your bike. No more. Now it’s potentially much more fun – and rewarding. Online ‘configurators’ by the leading manufacturers show you not only how a bike actually looks in different colours, they allow you to ‘fit’ official accessories such as luggage, screens, different seats, exhausts and all-manner of cosmetic items, so you’ll know exactly how your bike will end up with different configurations of parts. In truth, the car industry has been doing it for years. Most teenage boys have whiled away afternoons configuring different BMW’s Jaguars and Aston Martins, I know mine has. Now, though, thanks to the efforts of Triumph, Ducati, Yamaha and more, you can play at ‘dressing up’ bikes, too – even if you’ve no intention of buying them. And, if the novelty of that wears off, why not check out the specialist sites of the likes of Akrapovic, Ermax, Givi and more to start that wish list of other accessories you might actually go for this summer…

Bennetts customers can check out the BennettsRewards site for discounts with the likes of Halfords and Performance Parts. 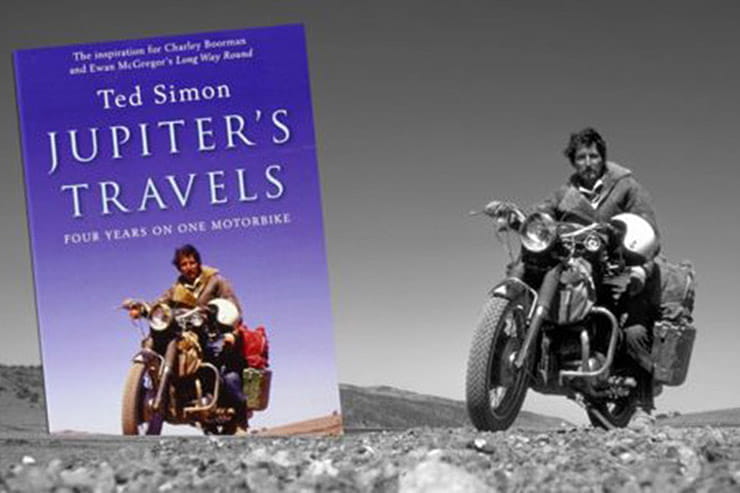 ‘Books’, even the word now seems old-fashioned, which in this online digital world they actually are. When do most of us have the time to snuggle into a favourite chair for a couple of hours or more and immerse ourselves into that long-promised tome? Well, now actually. And there’s plenty of fabulous motorcycling books to do it with, all easily available online. For bikesport fans, there’s Motocourse and the MotoGP annual, the latter written by the brilliant Mat Oxley. For adventure travellers why not treat yourself to Ted Simon’s classic Jupiter’s Travels, if you’ve not yet read it or, more recently, Ghost Rider by Rush’s recently departed drummer Neil Peart? There’s plenty of new bike-specific histories, technical manuals and more and, thanks to the likes of Amazon, they’ve never been easier to browse from the comfort of your own home and also buy and get delivered without having to venture outside your front door. Brilliant. 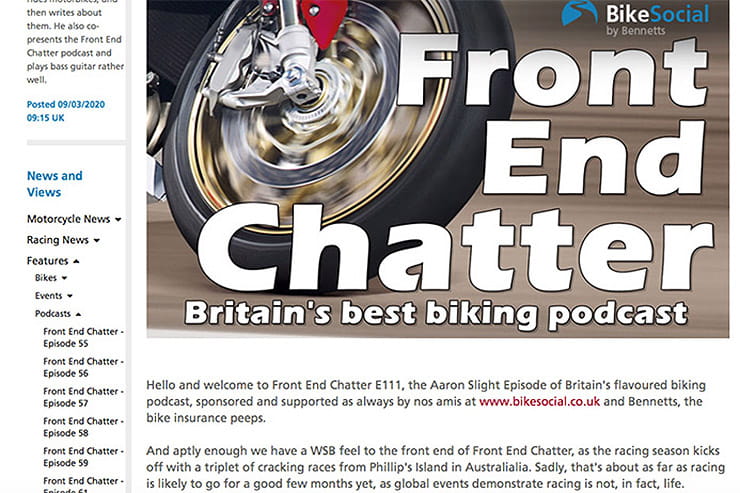 Exploit social media to the full

People may complain about the hardships and inaccessibility of this current crisis but, in truth, thanks to modern digital communications, online shopping and the connectivity and interaction the social media platforms provide, we’ve never had it so good. Take Bennetts BikeSocial for a start, packed not just with info, news, features and more, but also homing UK biking’s leading podcast, Front End Chatter’ – if you haven’t listened to them yet, now’s the perfect time. There’s much, much more, too, whether via Facebook, Twitter or Instagram, all places where you can get involved in a whole new community and social group relevant to you and your biking. So, if you haven’t explored it all to the full already or are still a ‘newbie’ now’s the time to really see what’s out there.

Find the latest episode of Front End Chatter here, as well as an archive from the last three years.

And, finally, a biggie ­– but also one that this crisis now provides a near-perfect opportunity for you to explore – start that rebuild or restoration project you’ve long been putting off. You need a starting point, a ‘resto’ project or rolling chassis, which, if you haven’t already got might be a little tricky to pick up, but many of already have at least one of those already rusting away in the corner of the garage. I have three. From there, it’s all possible – all it needs is your time. Parts, new and used, are all still available online with deliveries by post or courier still, as I write, going ahead. There’s plenty of advice available online, too, both through dedicated sites and forums. Most of us already have all the tools we need in fact, overall, there’s nothing holding you back. In fact, that’s got me thinking: as soon as I finish this, I’m off to the garage. There’s a Yamaha and a Triumph calling out to me. I’ll see you on the other side…