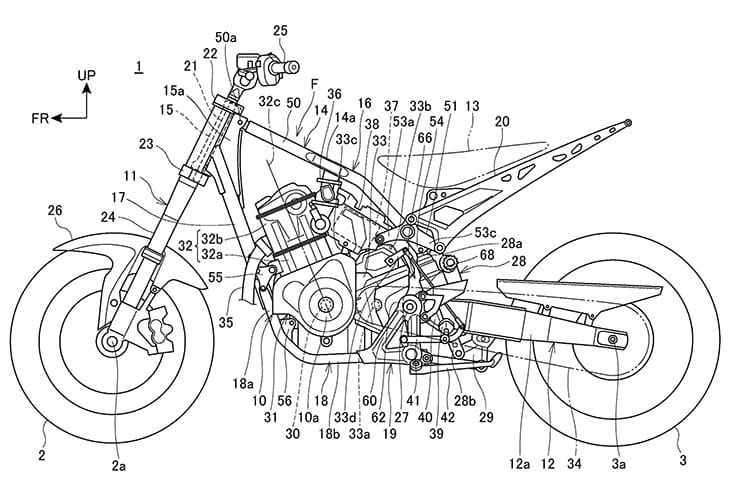 The 1084cc parallel twin in Honda’s latest Africa Twin could find a new home in a street-oriented roadster in the not-too-distant future – with newly published patents showing the firm has already designed two new frames around the engine.

It makes a huge amount of sense. Engines are horrifyingly expensive to develop and the tooling needed to mass-produce them is similarly wallet-denting for manufacturers. Those prices are only going up, too, as ever-stricter emissions regulations make it harder for companies to eke every last drop of performance from their designs while keeping the exhausts spring-fresh.

Motorcycle frames and bodywork, by contrast, are relatively cheap to both design and make, and with most other components – electronics, brakes, wheels and suspension – available off-the-shelf it’s easy to understand why companies tend to make multiple models around each of their engines.

Ducati, Harley-Davidson, Triumph, Aprilia, BMW – they all follow the same route; building several bikes, often of completely different styles and purposes, around each of their engines.

Where in the past Japanese firms tended to operate differently, often using a completely new engine for each model of bike, these days they’ve also fallen into line with the same idea. Yamaha’s MT-09 triple and MT-07 twin, for instance, appear in several different bikes. 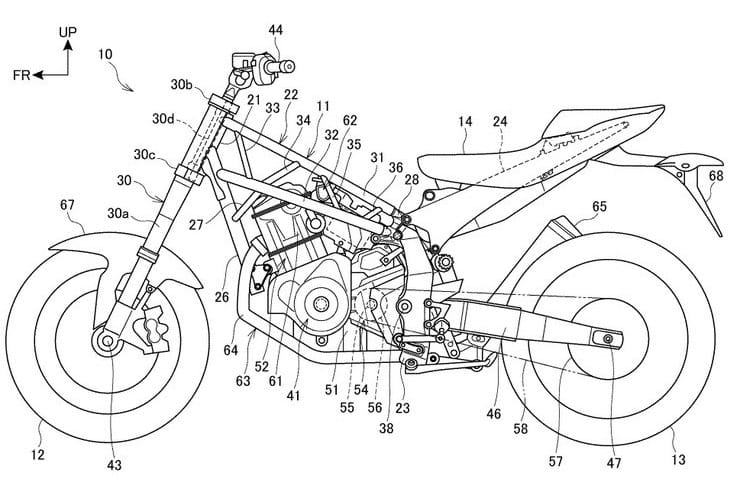 Honda has also adopted the same thinking. The CB500 range, for instance, includes the CB500F naked, the CBR500R sports bike and the CB500X adventure model. The NC750 line ranges from the Integra scooter to the NC750X and NC750S. Even the CB650 and VFR800 are used as the basis of more than one distinct model.

As such, the Africa Twin with its bespoke 1084cc parallel twin is an outlier, since the engine can currently only be found in that bike.

The new patents show two completely different chassis designs that appear to be competing for the same goal. One is a cradle-style steel frame, with a backbone and a front downtube that splits into two under-engine cradle sections.  The second is a sportier-looking chassis with a steel trellis-style front section bolted to an aluminium swingarm pivot element.

Both designs, though, are clearly built around the same key specifications; the share identical positioning for the bars, seat and pegs, the same forks and swingarm and – most importantly – the same Africa Twin-derived engine. 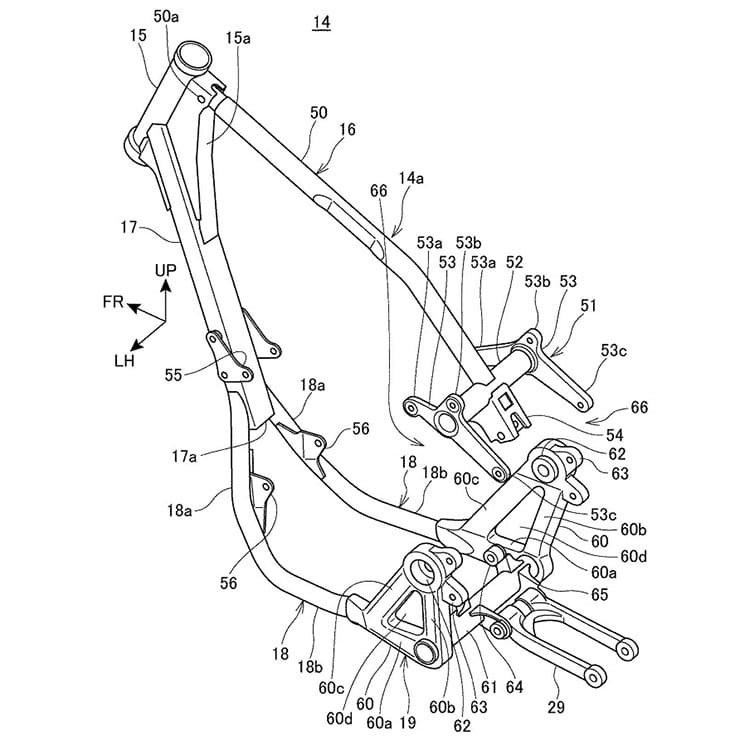 Cradle chassis intended to improve the ‘balance of rigidity’

From the key shared components it looks like the final bike is intended to be a roadster along the lines of the CB650R or CB1000R. The forks are upside-downers with radial front brake calipers, the pegs are relatively high and rear-set and the bars are wide, relatively straight and fairly low. Both designs appear to use a cast alloy seat subframe and would be well suited to a neo-retro style as seen on the CB650R and CB1000R.

The backbone frame (above) would lend itself to a more overtly retro style. Although the use of a backbone and dual cradle sections under the engine is very traditional, it breaks with convention by having no vertical rear frame section to connect the backbone to swingarm pivot. Instead the engine, bolted to the frame at the top, front and bottom, provides all the structure in that section.

The trellis design (below) goes the other way, losing the under-engine cradle section – the engine provides triangulation in that direction – but featuring a beefy aluminium section to add structure around the swingarm pivot.

When it comes to purpose, the patent for the cradle design says it’s intended to improve the balance of rigidity, while the trellis version claims to offer reduced weight and improved steering stability. 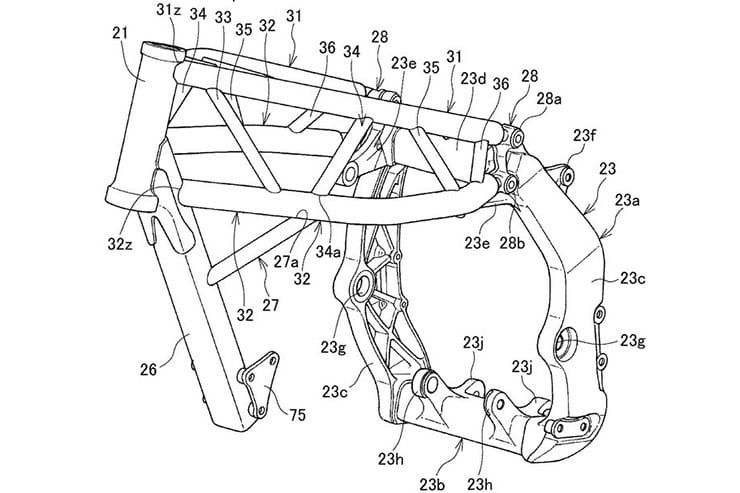 Trellis frame, above, is aimed at lightness and stability

It’s far too early to say which, if either, of these designs will be selected but it looks like Honda is serious about using the Africa Twin engine in a more street-oriented bike.

That’s something the motor should be well suited to. With 101hp and 77.5lbft of torque both coming at relatively relaxed revs it’s unlike anything Honda currently offers in its street range, and like the NC750’s twin it can be had with the firm’s DCT semi-automatic transmission.

Importantly, it’s also an engine that’s already been uprated to meet Euro 5 emissions rules, gaining extra capacity for 2020 to offset any performance losses incurred in the process. While adventure bikes are still riding high on a wave of popularity, the naked bike market has actually shown stronger growth over the last few years and now accounts for significantly more sales in the UK that the market for adventure-style models. Other markets have similar trends, with a particular growth in neo-retro unfaired models that combine evocative styling with modern technology and performance.