“Thieves sticking out like a sore thumb” Coronavirus and bike theft 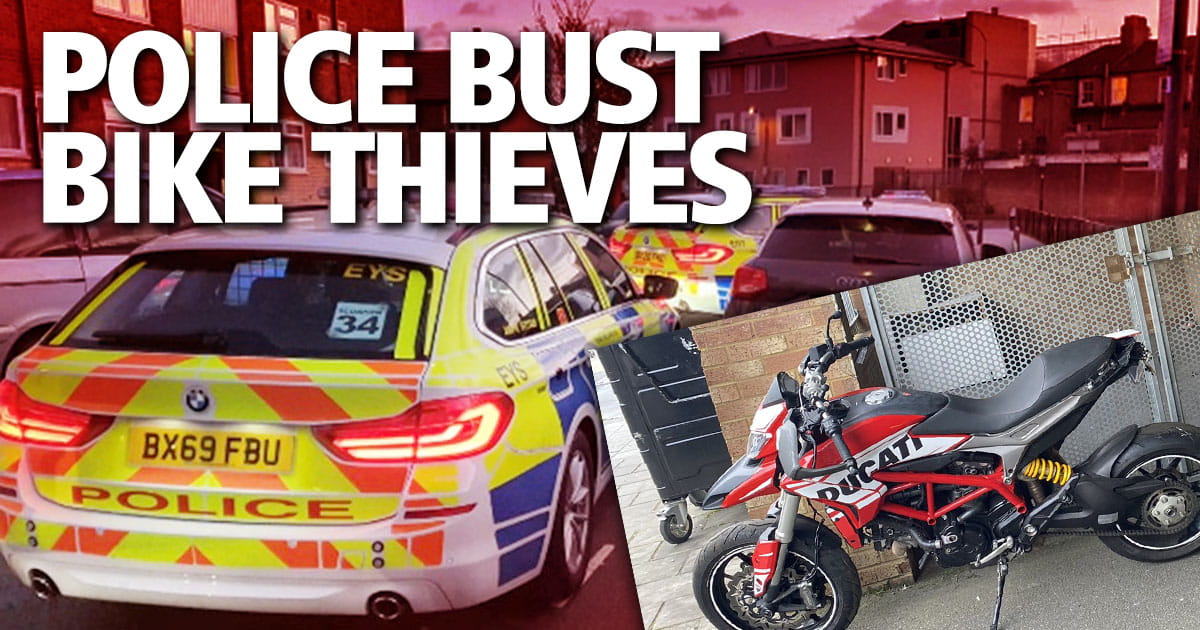 Is your bike safe while you’re unable to use it during the Coronavirus lockdown? Historically, extended periods of economic downturn can lead to increased crime as people get more desperate, but The Guardian reported that recorded crime was down by as much as 20% in some areas; “Some people rely on shoplifting to fund their drug habit,” Stephen White, acting police and crime commissioner for Durham said. “That’s harder as the shops are closed.”

An increase is however expected in internet crime such as fraud and scams, as well as domestic violence, and already forces around the country are seeing reductions in officers as many have to self-isolate with symptoms of the virus; Merseyside had 7% of its force absent, while the  Metopolitan police in London had 20% of staff members off work.

According to Europol, lockdowns in many countries have seen crimes like burglaries and street fights reduced, but cyber criminality has increased. Property crimes were also reported to be down by the European Union’s law enforcement agency, though an increase was expected thanks to so many commercial buildings and second homes being empty.

People are also being told to beware of doorstep scams, including bogus doctors asking to come into homes to administer a Covid-19 test, then committing burglary.

The National Police Chief’s Council (NPCC) has also said that gangs have been using fake ID to take money from the vulnerable on the pretence of doing their shopping for them, as well as offering to sell counterfeit hand sanitiser, face masks and testing kits. 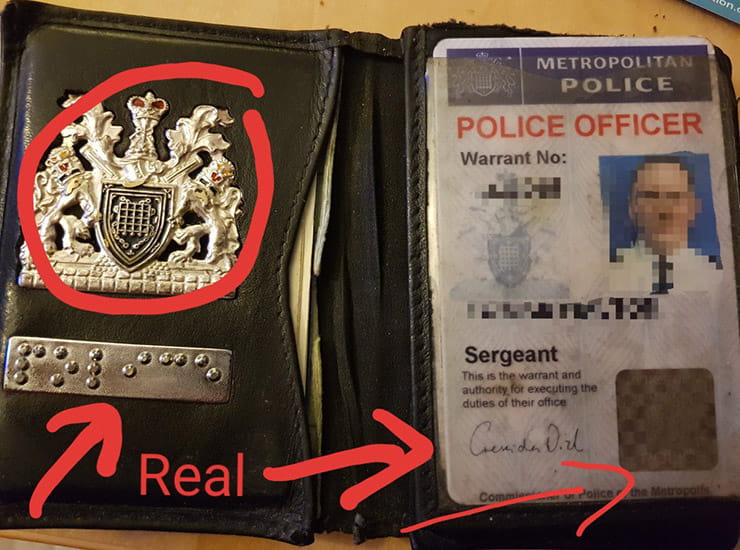 This is what a genuine Metropolitan police warrant card looks like. If you are in ANY doubt about an officer’s authenticity, ask them to wait while you verify their identity with the police force control room at 101

UK police forces are stretched at the best of times, but that doesn’t mean officers will be ignoring crime, and that includes bike theft…

“It’s fair to say that demand across the entire force is down at the minute,” Sergeant Daniel Kabal of the Greater Manchester Police Tactical Vehicle Intercept Unit, Specialist Operations Branch told us. “That said, we are still seeing a number of domestic burglaries and robberies where vehicles are being taken.

“My team had a great job on Sunday night – a car was stolen from the staff car park of the MRI hospital, which belonged to a doctor who was on duty at the time.

“We located it, pursued it and caught the driver.” 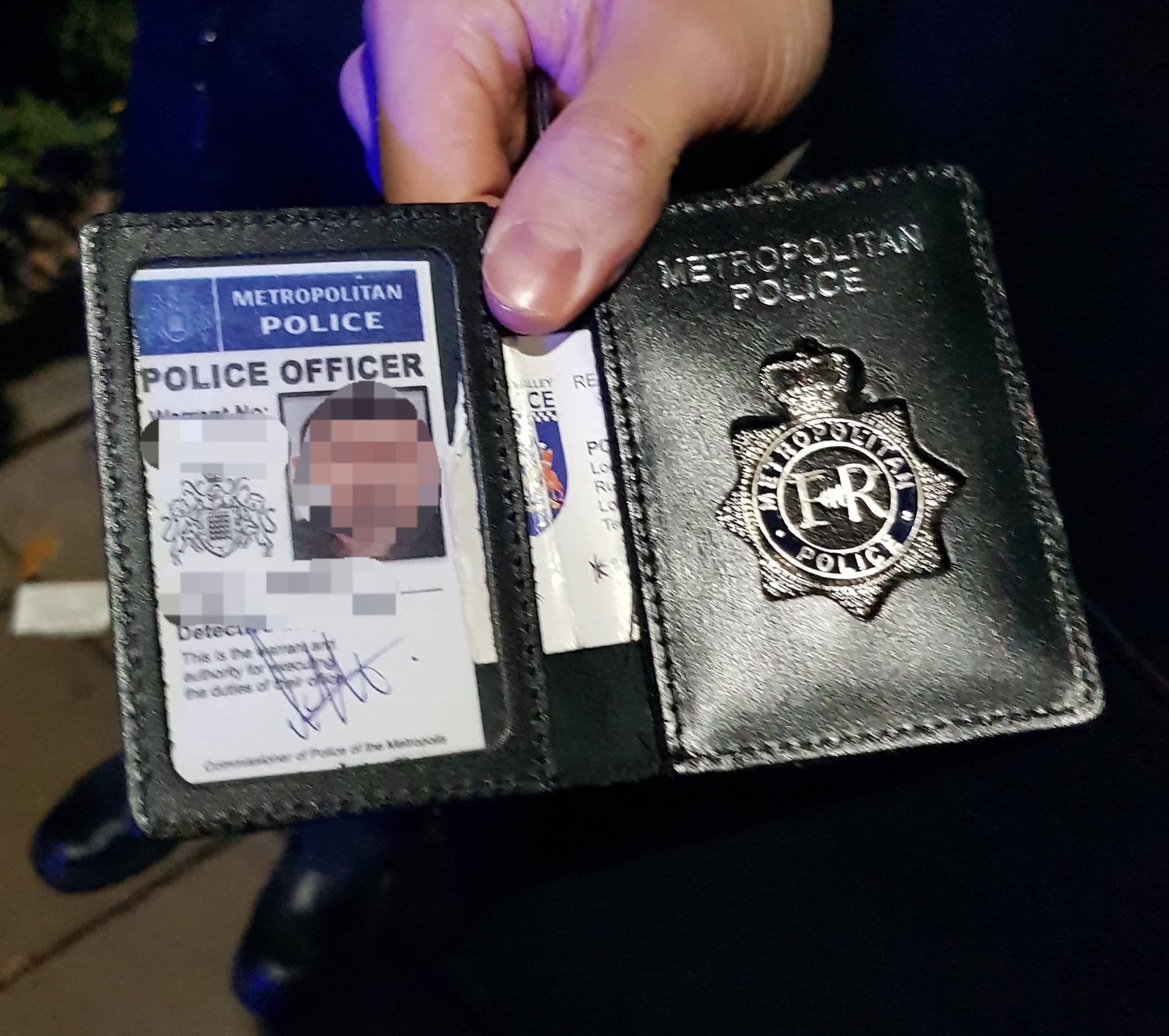 This is a fake Met warrant card. The badge is from a police cap – compare it to the above and the differences are obvious.

On Sunday March 29, police in London were called to a robbery in West Ealing; the occupants of a black Audi threatened a scooter rider with baseball bats and a knife, before one of them rode off on the machine. A description of the car was circulated and ANPR (auto number plate recognition) technology was used to track it to Fulham where, about an hour after the attack, the car was boxed in and the two men – both aged 21 – were arrested on suspicion of robbery.

Interestingly, the Metropolitan police force’s Operation Gilera has been seeing scooters used less frequently in street robberies. In the year to February 9, it recorded 2,325 robberies where the suspect was riding a pushbike, up from 1,380 the previous year, while the City of London Police recorded 169 bicycle-enabled robberies in 2019, compared to just 58 on scooters. 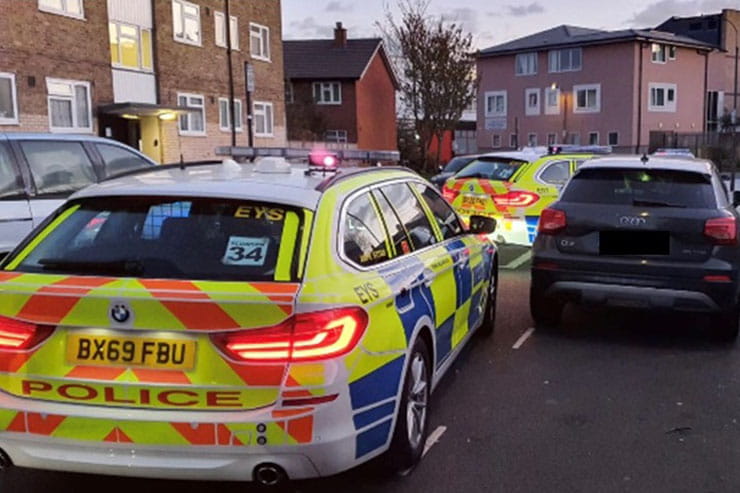 Is my motorcycle safe during the Coronavirus lockdown

The worldwide crisis has brought out the best in so many, but unfortunately there’s a minority that will manage to take advantage of the pandemic for their own criminal advantage. But to get to your motorcycle, they’ll need to be out on the street. “It’s usually a case of not being able to see the wood for the trees,” one police officer is reported to have said. “But now they’re standing out like a sore thumb.”

Tough measures are being introduced to allow the police to deal with people who don’t adhere to the government’s social distancing and essential travel guidelines – a man has already been charged with ‘contravening emergency Coronavirus measures’ in Stalybridge.

The chances are that you’ll be able to keep a closer eye on your bike than usual, but the advice will always remain that, should you witness criminal activity, report it immediately by dialling 999 and keep yourself safe. If you see anything suspicious, like a lot of bikes being taken into a lockup (which could be a chop-shop), report it to 101. 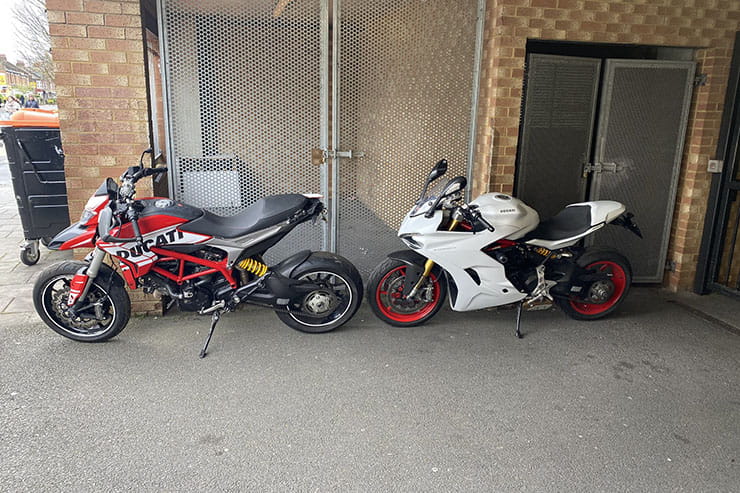 These bikes were recovered quickly by BikeTrac after being stolen; the company's unique RF technology allowed them to pinpoint the two machines in a private car park

Bill Taylor of BikeTrac told Bennetts BikeSocial that “BikeTrac is operating safely during lockdown, and so far we haven’t seen any real dip in motorcycle theft; the criminals seem to be ignoring the home lockdown”.

BikeTrac’s recently appointed recovery partner – Securitas – is also operating during this difficult time. “We’re extremely proud of our recovery rate, which is very much down to the great support we have had – and still have – from police forces across the UK,” said Bill. “But there are times when we can’t get an officer on scene as quickly as we’d like, which is when we’re able to despatch a CRB-checked Securitas Protective Services Officer to the scene, to quickly confirm the stolen bike’s location, and to secure it pending arrival of the police or the owner.” 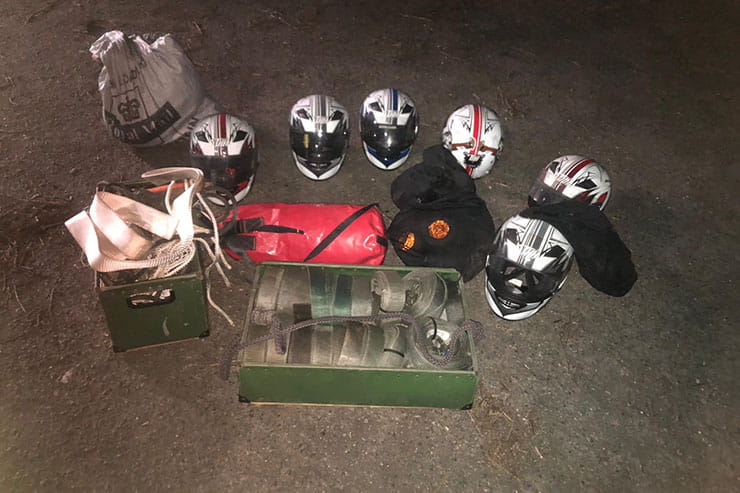 These are some of the goods recovered by police after the burglary of a bike shop in Redbridge, London

Datatool – manufacturer of Thatcham S5 approved trackers, alarms and immobilisers – has all operations in place through remote working, along with warehousing and manufacturing at its Chorley HQ.

“We’re still dispatching trackers to our partners including Yamaha, Honda and BMW, where they’re still being fitted to motorcycles.” said Dan Balsamini of Datatool. “We’ve got a great relationship with the UK’s police forces, and while they’re of course stretched, we continue to see the excellent response – around the country – that helps us recover the vast majority of motorcycles, scooters and mopeds that are stolen while equipped with TrakKing.

“As just a handful of examples in the past week of lockdown, a Honda PCX125 was stolen in London at 19.03 and recovered at 19.52. A Honda X-ADV was recovered by London police just twenty minutes after being stolen, while a Yamaha MT-07 took officers just 23 minutes to retrieve.

“We haven’t really noticed a slump in thefts during lockdown – if anything there’s been a slight rise – but it’s too early to say with any accuracy if that’s a trend that will continue during the lockdown.” 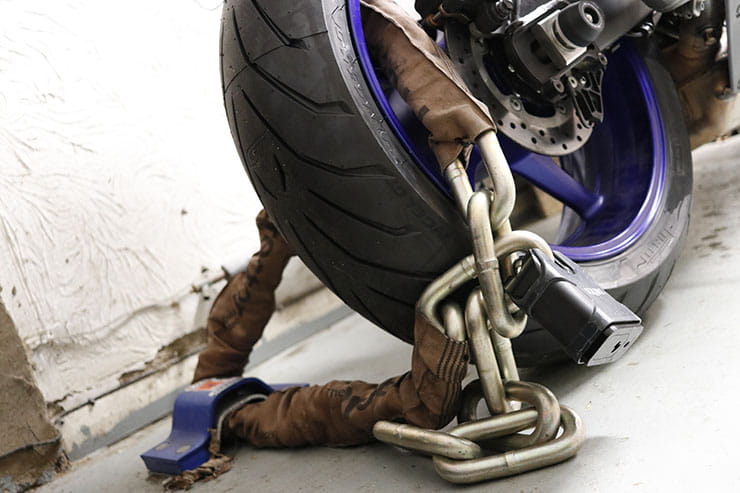 Keep your bike locked with as good a quality chain as you can afford; a decent one should last a lifetime

How to keep your motorcycle secure during Coronavirus lockdown

The best advice for keeping your bike safe is really little different to that at any time, but Police forces always have to prioritise incidents, and with officers being taken sick by Coronavirus – another reason it’s SO important that we all do our part and stay home – it’s vitally important that you keep your motorcycle secure.

There’s a huge amount of uncertainty for many people around the country, so some are delaying insuring their bikes while they can’t use them. This is completely understandable, though of course if they were to suffer a theft, they would be left completely out of pocket so please – whatever your situation – ensure you do everything you can to keep your bike secure.

You can read our reviews of all the best motorcycle and scooter locks here, as well as advice on keeping your bike safe. If your motorcycle has a tracker fitted, also make sure the subscription is up to date.

Bennetts Rewards members can take advantage of big savings on security from Pragmasis, Squire, BikeTrac and more at the Bennetts rewards website.

Ultimately, if everyone follows the UK government’s advice for Coronavirus, we’ll all get through this a lot quicker. Make sure you and your bike are ready for what’s going to be the most hotly-anticipated ride out we’ve ever had!