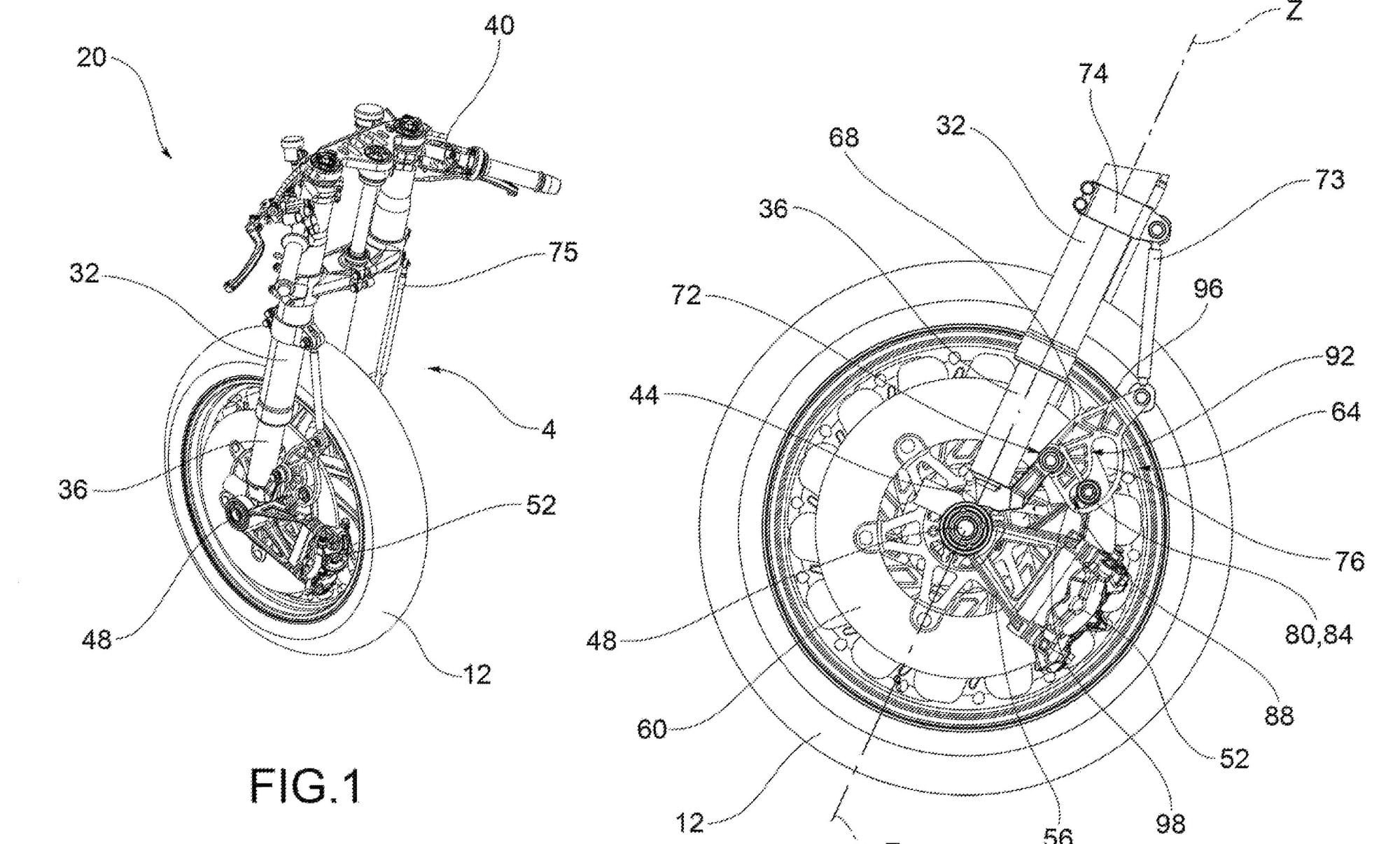 Anti-dive forks were a key part of motorcycle technology for a few brief years during the 1980s but disappeared by the end of that decade as the downsides of the designs outweighed their advantages. Now Aprilia’s engineers have come up with a new solution that might see the idea make a comeback.

The short-lived anti-dive era saw a host of designs appear from a variety of manufacturers, allied to the inevitable acronyms and technobabble that goes with any faddish new idea. Suzuki’s ANDF (Anti Nose Dive Forks), Kawasaki’s AVDS (Automatic Variable Damping System) and Honda’s TRAC (Torque Reactive Anti-dive Control) were just a few of those systems, but they all shared the same goal of stiffening suspension – usually by increasing damping – when the brakes were applied to try to reduce dive during braking. The most common route was to use brake fluid pressure to adjust damping, while TRAC differed a little by using movement of the front brake caliper itself to make the damping tweak, but all suffered problems that virtually eliminated their benefits. Most notably, because they altered the damping rather than the spring rate, they made the suspension harsh during braking and reducing its ability to cope with bumps in braking zones. 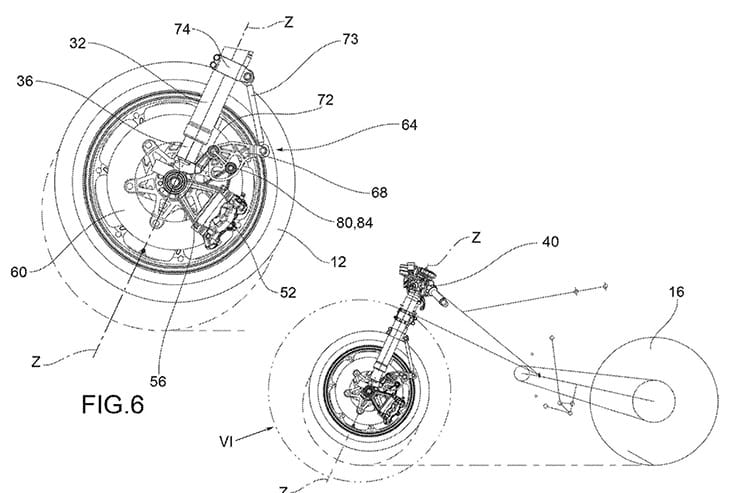 By the dawn of the 1990s, the advent of improved suspension technology meant that forks could be designed that offered different levels of high-speed and low-speed damping. That doesn’t relate to the bike’s speed, but to the speed of the fork’s movement. Bumps tend to create sharp movements, dealt with by high-speed damping, while braking creates a slower compression, allowing low-speed damping – which is usually firmer – to control dive.

However, the issue of suspension dive during braking has never been completely resolved. Some ideas, like hub-centre steering or Hossack-style forks, can effectively combat it but a lack of development compared to the common telescopic fork means those ideas have never been widely adopted.

Now Aprilia has come up with an idea that allows bikes to retain all the familiarity and decades of development that comes with telescopic forks but adds an almost infinitely adjustable level of anti-dive that uses physics to work against dive rather than messing with the carefully adjusted damping. 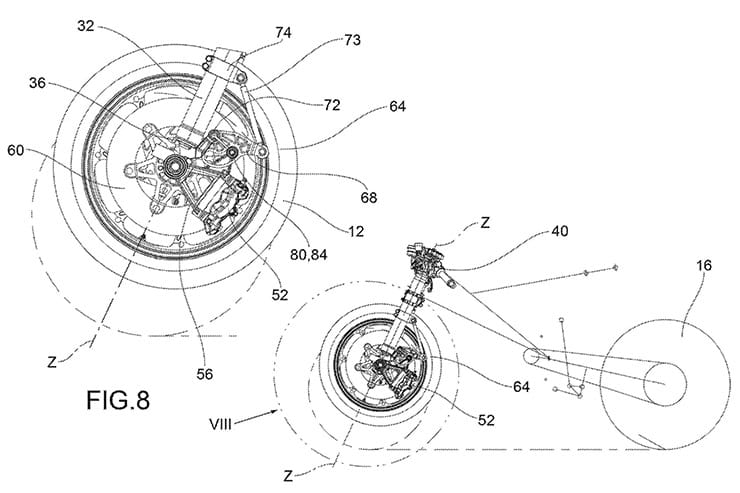 The images here show how Aprilia’s system works. The front brake caliper is mounted on a bracket that can rotate by a few degrees in relation to the front wheel spindle, and a linkage that connects the caliper to the upper section of the forks.

When the brakes are applied, the caliper and its bracket try to rotate with the direction of the wheel, which in turn applies a force to the link attached to the fork. That force works against the diving movement.

But it’s not as simple as that. Aprilia has also added a linkage that alters the amount of anti-dive depending on how much the forks are compressed.

When fully extended, the anti-dive effect is at is maximum. The extra link – labelled ‘68’ in these drawings – features a curved slot that houses a roller (80) that’s mounted on the brake caliper bracket, and its lower end pivots on the bottom of the forks. The shape of that curved slot defines how the anti-dive is ‘mapped’ depending on suspension movement.

In the drawings shown here, the curve is shaped to maximise anti-dive in the initial part of suspension movement, but to allow the effect to tail off as the forks compress.

Initially, the caliper-mounted roller is in the bottom of the slot. As the forks compress and the linkage moves, the slot’s shape means that the brake caliper needs to be pushed in the opposite direction of the wheel’s rotation – a movement that it will resist when the brakes are on.

However, as the forks overcome that resistance and compress, the roller moves around the curved slot, and as it does the slot’s curved shape means the effort to push the caliper in the opposite direction of the wheel’s rotation is reduced. 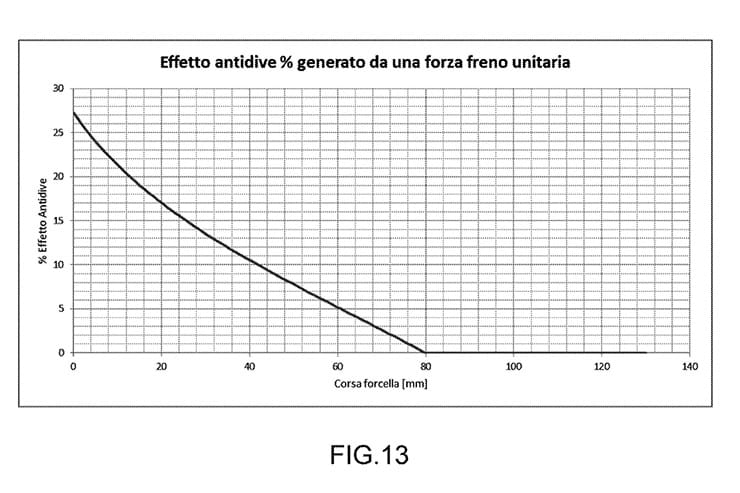 The idea is that the initial part of braking will take place in a straight line, when there’s maximum grip and there’s a benefit in working against fork dive. But as the dive overcomes that effect and compresses the forks more, riders will be nearer the limits of grip, at which point it becomes more important that bumps are absorbed, so the anti-dive effect is removed.

A neat element of the new Aprilia design is that it’s completely adjustable. The starting point of the anti-dive system can be tweaked simply by moving the linkage’s top mount – it can be slid up or down the forks to change the angle of the linkage and the position of the roller in its arced slot. For more extreme changes, the slotted linkage section itself can be swapped for designs with different curves.

The drawings appear to show the design fitted to forks and brakes from either Aprilia’s MotoGP bike or its WSBK machine, suggesting that racing is firmly in its sights. However, given the trickle-down of racing technology to the road, if the idea work’s it’s easy to imagine a showroom version making an appearance somewhere further down the line.