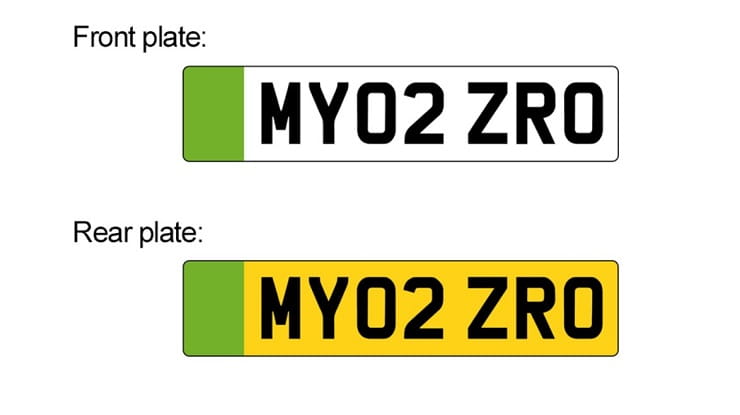 Government image shows what the new ‘green’ plates will look like

After launching a consultation on the matter last October the Government has decided to go ahead with plans to launch ‘green’ number plates for zero-emissions vehicles including electric motorcycles as soon as this autumn.

The 12-week consultation garnered 1200 responses from 1134 individuals and 66 organisations with an interest in the subject. Those responses have now been analysed, resulting in the decision to push ahead with the idea.

In its response, the Government has decided to go with plates that use a green ‘flash’ on the left hand side of the number, rather like the optional blue EU country identifier that’s been in use for years. The green elements will appear on both front and rear plates of cars, and of course on rear plates of motorcycles – although the Government has yet to issue an illustration of a square, bike-style plate with the design. Other alternatives that were suggested in the original consultation but discarded in the final report included all-green plates and plates with a green symbol. A national flag and GB lettering can also be added to the green flash on the final design. 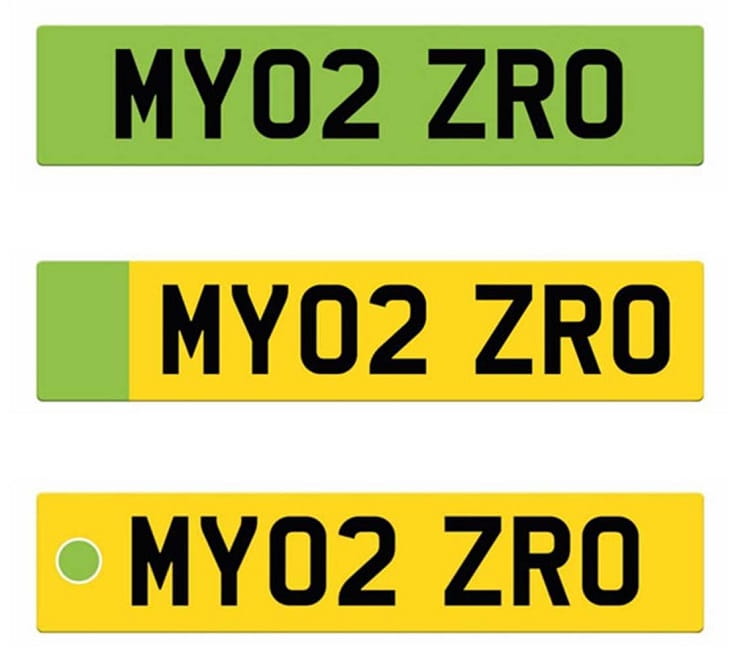 The all-green option and the green ‘symbol’ designs were dropped

The scheme will be a non-mandatory, ‘opt-out’ arrangement – so there’s no requirement for existing electric bikes to get new plates if their owners don’t want them and buyers of new bikes won’t be forced to display their electric allegiance.  They’re set to be used on cars, vans, taxis, buses, HGVs and coaches as well as motorcycles.

Respondents to the original consultation were clear that the plates should only be used on zero-emissions battery-powered or fuel cell vehicles, with 74.3% agreeing that low emissions vehicles like hybrids shouldn’t be included. A majority also supported the ‘green flash’ design, with 57.9% backing that layout. A much smaller proportion, 15.7%, preferred the idea of a green symbol. While some liked the idea of an all-green plate, the Government response pointed out that this would require extensive testing to ensure they could be read by ANPR (automatic number plate recognition systems) and speed cameras, and a change to the British Standard for Retroreflective Number Plates that would significantly delay the idea. Some other ideas, like the use of ‘EV’ lettering on the plates, were also discarded because they might confuse ANPR systems. 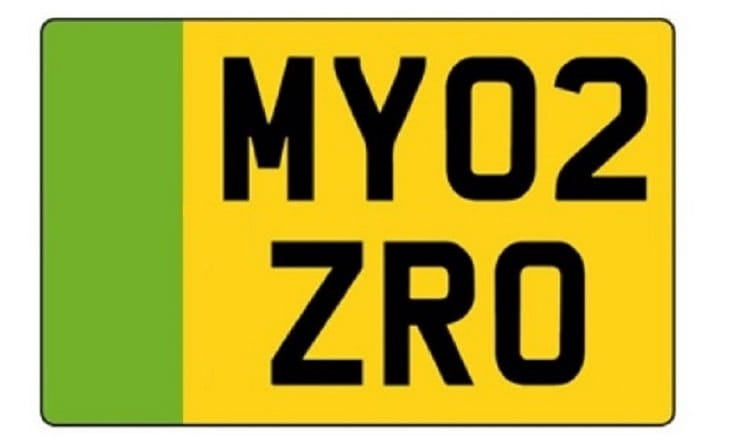 Although there’s been no official image of a bike-style ‘green’ plate, it should look like this

With the green plates not being made mandatory on zero emissions vehicles, it’s valid to ask why they’re being introduced at all. The original consultation document said: “As well as promoting zero-emissions vehicles, green number plates could help support local incentives for electric vehicles such as access to bus or low emissions vehicle lanes, electric charging bays or ultra-low-emissions-zones.”

However, the Government’s response to the consultation says: “As outlined, as the plates would only be a soft enforcement aid, that provides a visual tool to help indicate vehicle emissions and type, there is no direct link to incentives. As they do now, local areas would have to consider appropriate ways to more formally enforce any local measures they introduce.”

One reason for the change in stance is that if the green plates were to be used on their own to give additional freedoms to EV owners, the system could be open to fraud. The response said: “The fact that green number plates will be non-mandatory, and that ANPR reads the characters on the number plates and not the colour, further illustrates that there would be no material benefit to displaying a green number plate. For these reasons the scheme is unlikely to increase the risk of number plate fraud and cloning.”

Since there needs to be legislative change to make the new green plates legal, there’s no definitive date for their introduction yet but the Government believes the law can be altered in time to allow them to come into use in the autumn. It would make sense for the rule change to coincide with the introduction of ‘70’ plates for new vehicles registered after 1st September 2020.