Do we need a new approach to road policing? 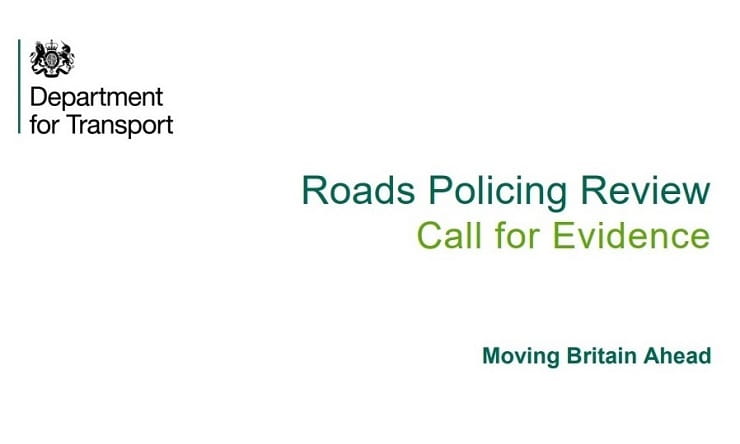 The Government has put out a ‘call for evidence’ as part of the Roads Policing Review that it first launched a year ago in July 2019. It’s a consultation that’s likely to mould the future law enforcement attitudes to speeding, mobile phone use while driving and a host of other road safety issues.

The DfT says that the intention is to look at roads policing to ‘identify which current methods are most effective’ and to ‘understand how the capability and capacity of enforcement services can be enhanced to improve safety and reduce future casualties on roads.’

In more depth, the review will be looking at the use of intelligence to target dangerous behaviour, how technology can help with enforcement and how enforcement influences the behaviour of road users. 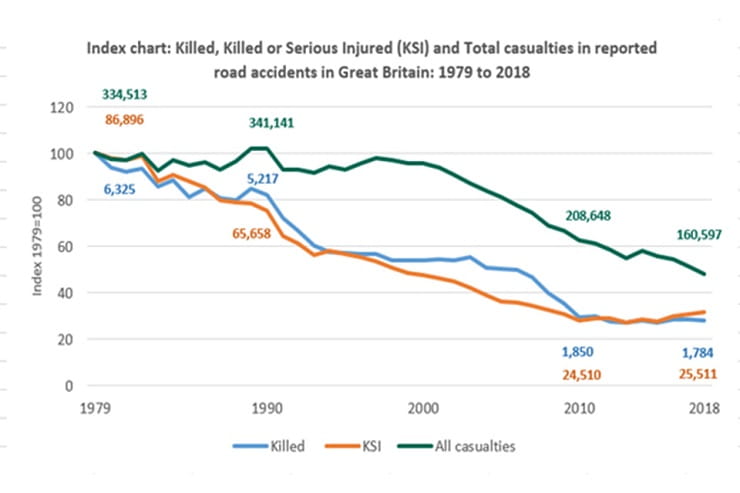 The consultation is set against the background of a levelling out of road deaths and serious injuries over the last decade after many years of steadily declining casualties. As seen above road fatalities (blue line) and KSI (killed or seriously injured) figures (orange line) dropped consistently for around 30 years from 1980 to 2010, despite rising numbers of road users. But for the last decade, while overall numbers of casualties (green line) have continued to fall, deaths and KSI numbers have plateaued.

Now the Government wants to know why that’s happened.

Over the last decade technology in cars and bikes has improved significantly – cars in particular have seen a huge increase in radar and camera-based sensor tech, with auto-braking and collision mitigation systems becoming commonplace, while on two wheels we’ve seen the proliferation of ABS and other rider-assist systems. However, the same period has also seen an exponential growth in the use of mobile phones (and particularly mobile internet) and a decline in police numbers due to the austerity measures introduced after the financial crisis. 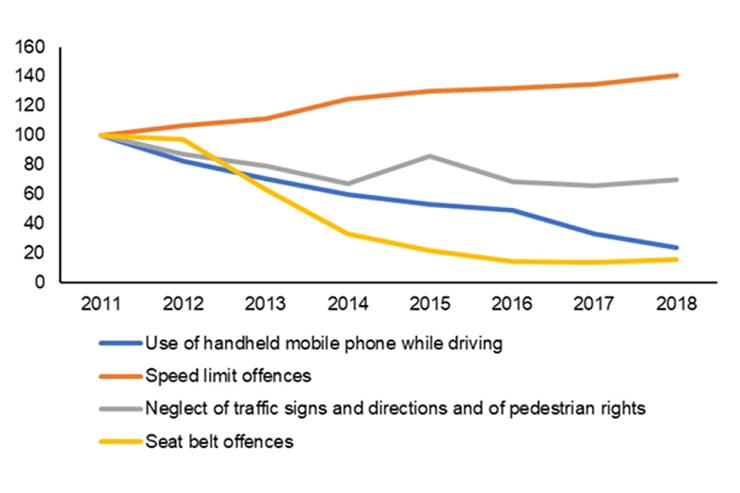 The graph above, which appears in the Government’s call for evidence, shows the number (in 100s) of motoring offences per year in four categories – speeding, mobile phone use, failure to use seat belts and neglect of traffic signs. They might be seen as an indication that speeding is a growing issue while the other issues have declined, but in reality they reflect the increased use of speed cameras and the corresponding decline in ‘real’ roads policing that would pick up on other offences.

That’s reinforced by evidence that despite the low number of prosecutions, the call for evidence points out that not wearing a seat belt was contributory to a massive 27% of road deaths in 2017, even though there were very few recorded seat belt offences. 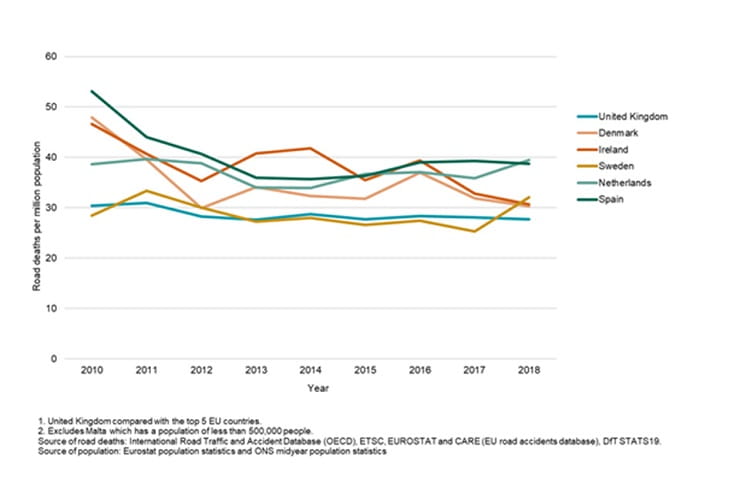 The UK still does well on road deaths in relation to other countries, but figures have flat-lined for a decade

The new ‘call for evidence’ – which you can read in full here – is open to individuals and organisations and will be open until 5th October this year, with the intention that replies will be collated and a summary published in late 2020.

The information it receives will be used to ‘form a basis for understanding the current position in respect of roads policing, identifying areas for further examination.’

Recommendations resulting from the consultation will be delivered in Spring 2021 and could form the basis of road police strategy for the foreseeable future.