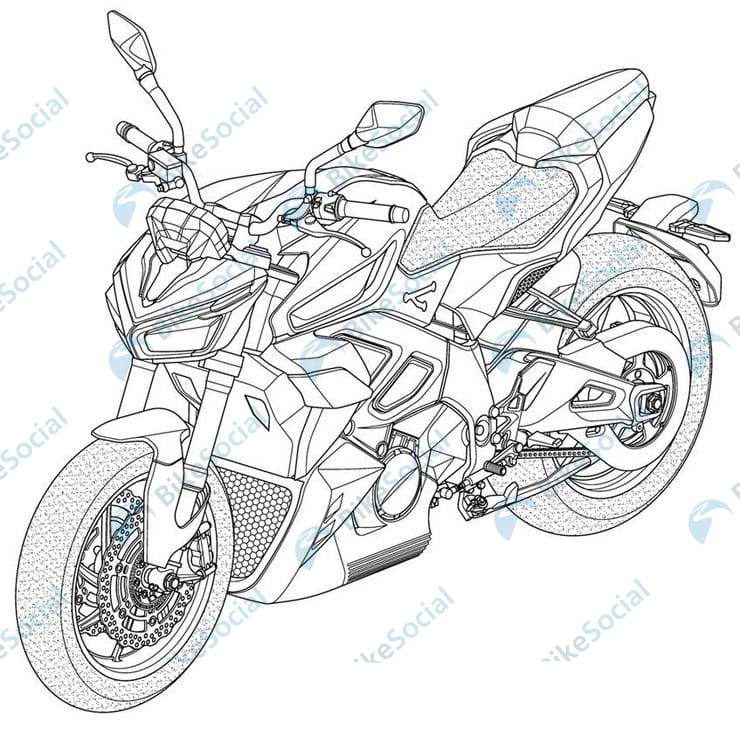 Although it didn’t get the fanfare of some of the more conventional machines at the show Kymco’s RevoNEX might well have been one of the most important bikes at last year’s EICMA event in Milan.

Representing the Taiwanese company’s entry into the world of electric motorcycles, it’s due to reach production in 2021 and promises performance to beat the current mainstream electric bike champ, Zero’s SR/F, along with innovative technology to appeal to riders weaned on fossil fuels.

While the EICMA bike was a concept-style preview, Kymco has now filed styling patents showing a tweaked version of the machine, likely to be more representative of the final production model that should be unveiled towards the end of this year. 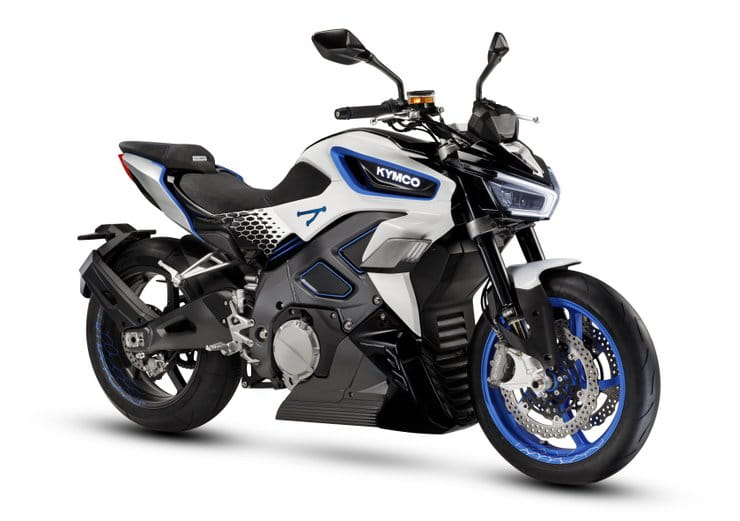 In case you missed it, the RevoNEX was a follow-up to the 2018 SuperNEX concept bike that was the first hint at Kymco’s electric future. It featured an electric motor of unspecified power, with similarly secretive battery specs, to achieve impressive performance claims including a 0-62mph time of 3.9 seconds and a top speed of 127mph (205km/h). Kymco said hitting that top speed took just 11.8 seconds from a standstill. Not superbike-fast, but certainly quick enough to see-off most traffic and easily on a par with the best of the existing crop of electric production bikes.

Production is already signed-off; at EICMA, the firm’s chairman, Allen Ko, said “RevoNEX is set to be available in 2021.”

The bike’s performance is similar to that of the Zero SR/F, but it’s achieved via a very different route. Kymco’s bolted the electric motor to a six-speed transmission, complete with a normal, hand-operated clutch and foot-controlled shifter. Not that it needs them; the electric motor means you can leave it in second gear and go all the way from stationary to beyond the national speed limit. But the ratios add greater flexibility in terms of performance and range while also increasing rider-engagement and giving familiarity for those of us used to petrol engines. 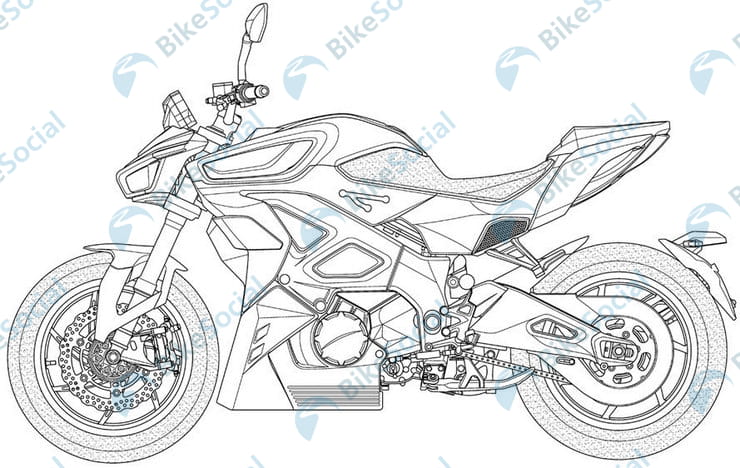 The innovations continued with an ‘Active Acoustic Motor’ described as a “multi-frequency acoustics generator that enhances the native sound of the motor.” In short it’s meant to sound better than a conventional electric bike without resorting to an entirely fake noise. As well as being another familiar touchstone for riders bred on conventional bikes, the noise is intended to provide an audible clue to rpm and load on the motor so you know when to shift gears.

This focus on noise might be the explanation behind the biggest change visible on these new patent drawings: the huge, all-enveloping chain guard.

Although it’s normally drowned out by other sounds on a petrol-powered bike, a chain drive is much noisier than the belt-drive system favoured by Zero’s electric bikes and the Harley LiveWire. It’s not a good sound, either – clanking and rattling as drive is taken up or disengaged – which is one reason electric bikes often opt for belts instead. Kymco might feel it needs the strength of a chain since, unlike most electric bikes, it has to cope with gearshifts, and the unusual chain guard could well be an attempt to dampen the noise it produces. 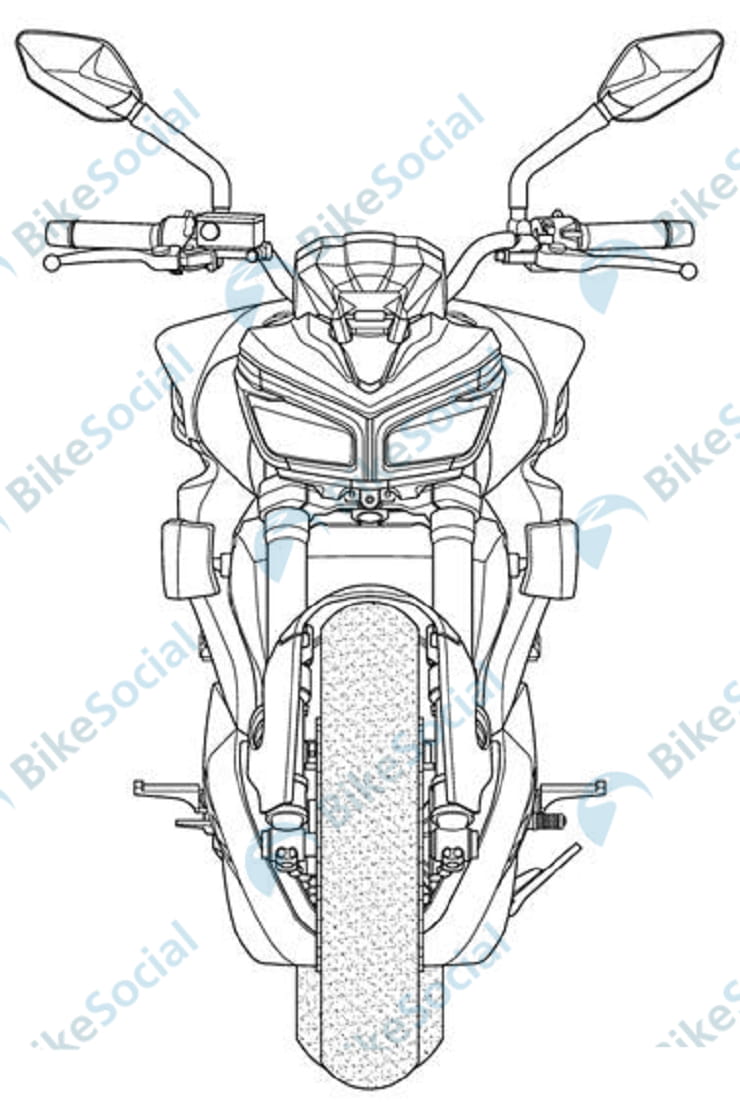 Other tweaks visible on the drawings include a new pillion seat cover that wasn’t present on last year’s concept version, as well as a redesigned side-stand and changes to the rear suspension’s rising rate system.

At the front, the concept’s Brembo brake calipers are replaced with a different design, and there’s a change to the master cylinder to reflect that update.

Finally, the drawings show small changes to shape of the instrument pack and the NACA-duct-style opening on the nose in front of it, as well as a change from five-spoke to seven-spoke wheels. 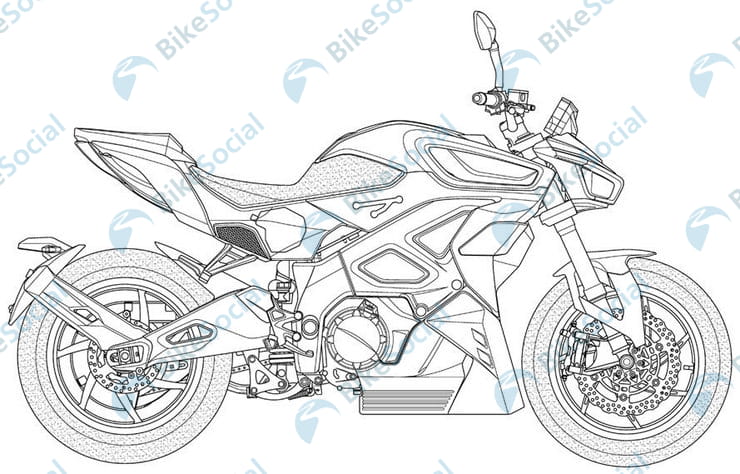 Stripped of its paintwork, the drawings give a better look at elements like door in below the right side of the rider’s seat, which is likely to hide the charging port.

What remains a mystery are key details like the bike’s charging speed, battery capacity, power, weight and range. Its 127mph top speed puts its performance fractionally ahead of the Zero SR/F (124mph) and well ahead of the 110mph Harley LiveWire, suggesting a peak power that’s at least on a par with the Zero’s 110hp. Range, battery capacity and weight will all be intrinsically linked, and along with price are likely to be the deciding factors in how widely the RevoNEX is accepted.

With the cancellation of most of this year’s big motorcycle shows, including the Intermot event in Cologne, it’s unclear when or where Kymco will be able to unveil the production version of the RevoNEX, but if it’s on schedule we’d expect to see more news emerge before the end of 2020.