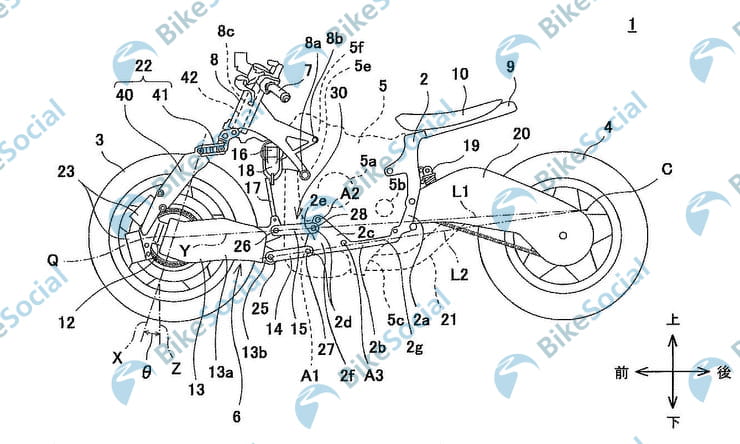 When Kawasaki revealed that it had taken a 49% stake in Italian minnow Bimota late last year it left plenty of industry-watchers puzzled. What use did the Japanese industrial giant have for a tiny boutique bike-maker that’s made fewer machines in its 47 year history than Kawasaki can churn out in a week? Perhaps this new patent application hints at the answer: it shows Kawasaki is working on the idea of a hub-steered bike.

In fact the idea is for a wide range of bikes, all based around a set of shared suspension and steering components.

Of course, Bimota has been a pioneer of hub-centre steering systems. The firm’s Tesi, first appearing back in 1990 but in development since 1982, is probably the best-known bike ever to use the idea, despite being built in miniscule numbers and at vast expense. 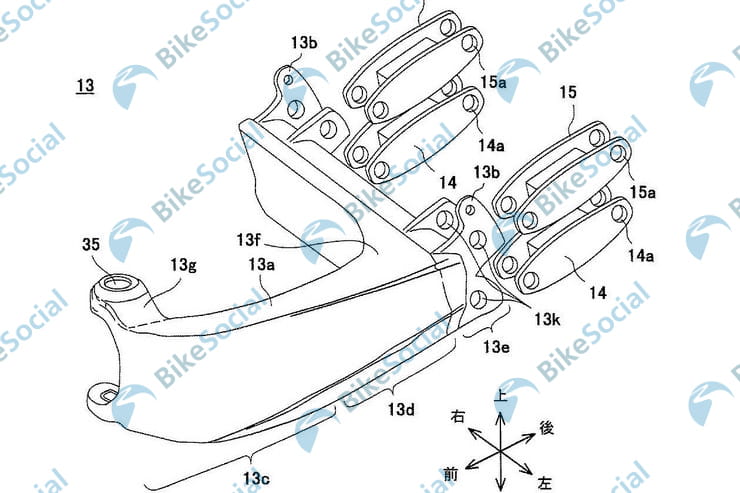 Kawasaki’s new patent isn’t a straight copy of the Tesi layout. In fact it’s got a rather different design, with a front suspension ‘swingarm’ that’s actually connected to the main frame via a set of not-quite-parallel links at the back. A near-vertical front member allows for steering, connecting to the bars via a linkage that allows the suspension to move.

A single front shock is mounted transversely across the width of the bike, just below the steering head, with a pushrod from the front swingarm to operate it.

The theoretical advantages in terms of handling and grip are the same as most other hub-steered bikes, including the Tesi. Braking forces travel straight along the front swingarm into the frame rather than taking a roundabout route via forks and the steering head as in conventional bikes. That means there’s no need for an overbuilt frame to cope with the huge leverage that forks apply under braking, and that the front suspension doesn’t have to compress when you hit the anchors. In turn, that means the bike should be well-placed to cope with bumps during braking, increasing front-end grip. 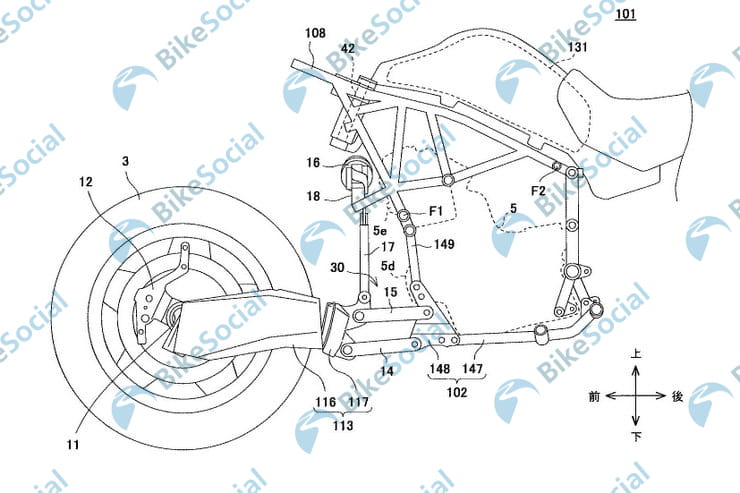 All those advantages are well-known, but hub-centre steering has notably failed to take off because the bikes that use it have usually been vastly expensive – like the Tesi – or unfamiliar-feeling to ride, like Yamaha’s GTS1000.

The cost issue is one that Kawasaki’s design is intended to beat. In fact, the patent suggests that cost saving is one of the design’s big advantages over conventional bikes.

Although there’s no suggestion that each bike using the hub-steer system will be cheaper to make than a conventional, fork-using design, the patent application puts cost saving at its heart, saying that multiple, completely different bikes could be built around the same major building blocks.

The idea is that the lower section of the bike – the engine, the vestigial lower frame around it and the front and rear swingarms – could be shared across several designs. By changing only the small sections that support the seat and the bars, completely different riding positions can be achieved and, in the patent author’s own words, “the cost required for the design and production can be suppressed.” 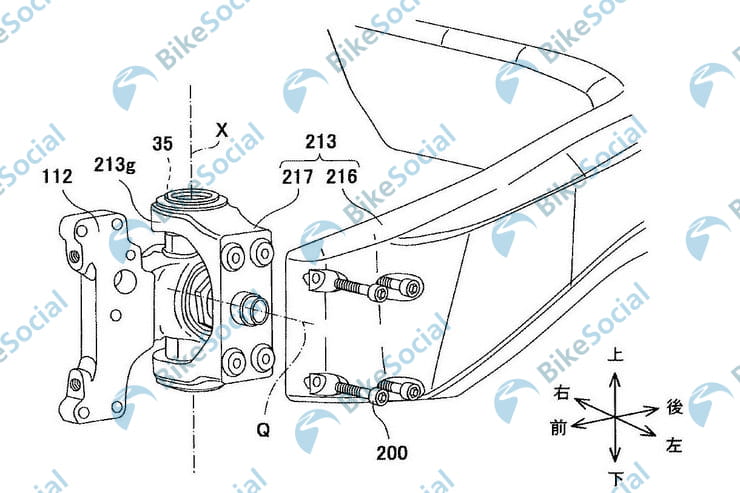 Although the design here is notably different to the Tesi, there are clues hidden in the document’s text that show Kawasaki could move to a much more Tesi-like layout, eliminating the parallel links that connect the swingarm to the chassis in favour of a simple pivot. The document reads: “…the pair of support link members, 14, 15, is not essential and may be omitted.”

The steering system shown in Kawasaki’s patent is much simpler than the Tesi’s design, which is potentially good news when it comes to getting accurate feedback at the bars. Every hinge and pivot obviously introduces the possibility of slop and slack, and the Kawasaki design only introduces two hinges in the linkage between the bars and the front wheel. That’s far fewer than the complex arrangement of pushrods and pivots that the Tesi uses.

Kawasaki also says it’s not wedded to the steering system shown here, suggesting that it could use other designs up to and including an actuator – presumably electronic or hydraulic – rather than a direct linkage twixt bars and front wheel.