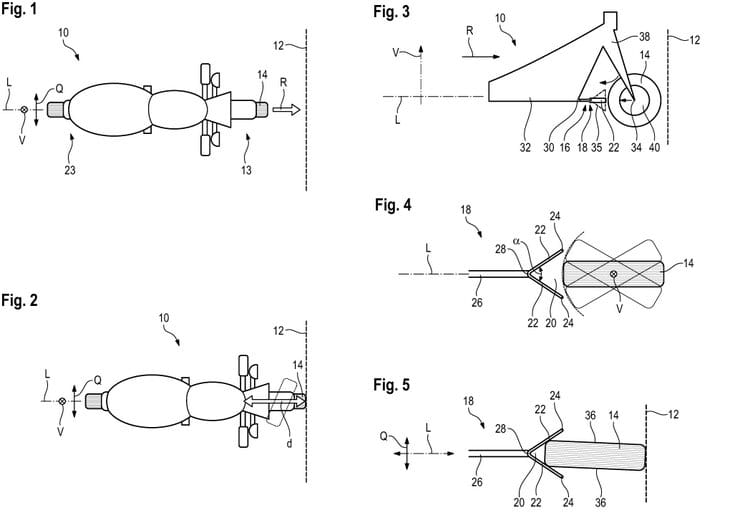 Patent images, above, show how BMW’s idea would work. Fig. 2 shows the difference between a straight front wheel and a turned one in a head-on crash. Fig.4 and Fig.5 show how the V-shaped support behind the front wheel could force it straight in an accident, creating a crumple zone.

Motorcycles and crash safety have never been easy bedfellows and past efforts to combine the two have rarely been greeted with success. But a new patent from BMW shows an incredibly simple idea that might just have a touch of genius.

Although modern developments in bike safety have sensibly focussed on the idea of preventing accidents in the first place – traction control, stability control and cornering ABS are all huge leaps from the recent past – there are inevitably moments when their efforts come to nought. At that crunching moment of impact responsibility for your safety shifts from the bike to your clothing, but BMW has realised that even when the worst comes to the worst there’s still a bit that can be done to mitigate harm.

We’re not talking about eyesores like the dreaded leg-protectors that the BMF once campaigned against, or BMW’s much-derided C1 roofed scooter. Instead the firm has realised that simply adding a small, V-shaped piece of metal just behind the front wheel could make a significant difference in a typical SMIDSY (Sorry Mate, I Didn’t See You) crash where a car pulls out into the path of a bike.

Normally, as a bike’s front wheel slams into the side of the car that’s pulled out from a side road the force will turn the wheel to one side. Not only does that pull the bars out of the rider’s hands but it reduces the length of the bike by several inches, leaving very little motorcycle in front of the rider to absorb any of the impact force.

By adding the V-shaped component behind the wheel, as the forks start to bend and the wheel is pushed backwards by the impact, it’s channelled into a straight-ahead position. That means the wheel rim and forks can effectively become a sort of crumple-zone, backed up by the V-shaped structure behind it as a secondary defence.

It might not be a panacea that instantly solves the problem of SMIDSY crashes, but every little helps and there’s potential to absorb a significant amount of energy – bending the forks and front wheel – that might otherwise be transmitted straight to the rider.

Will we ever see this design appear on a production bike? That’s unclear, but it doesn’t appear to be an expensive or hard-to-implement concept, and no doubt the V-shaped crash structure could be given double-duty – perhaps as a support for a radiator or bodywork – to offset weight and cost implications. 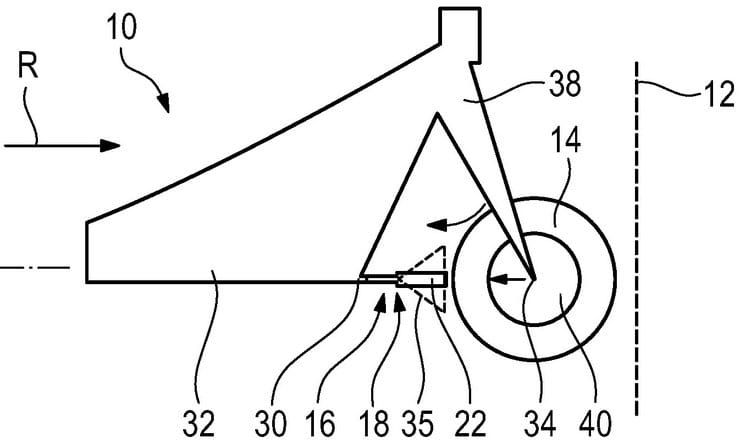