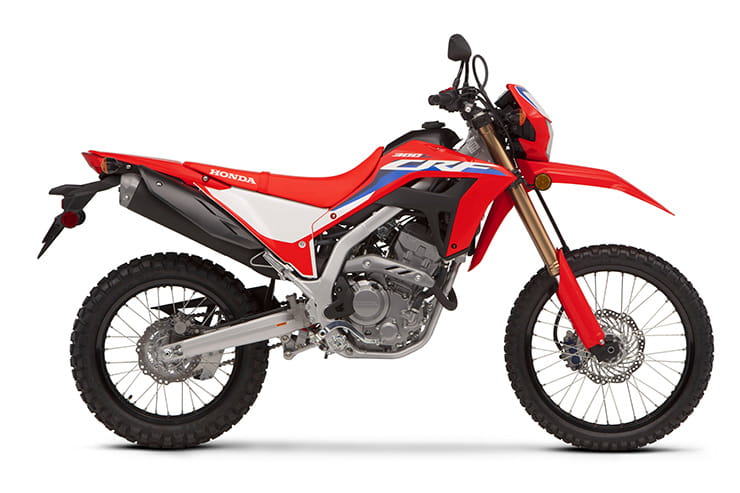 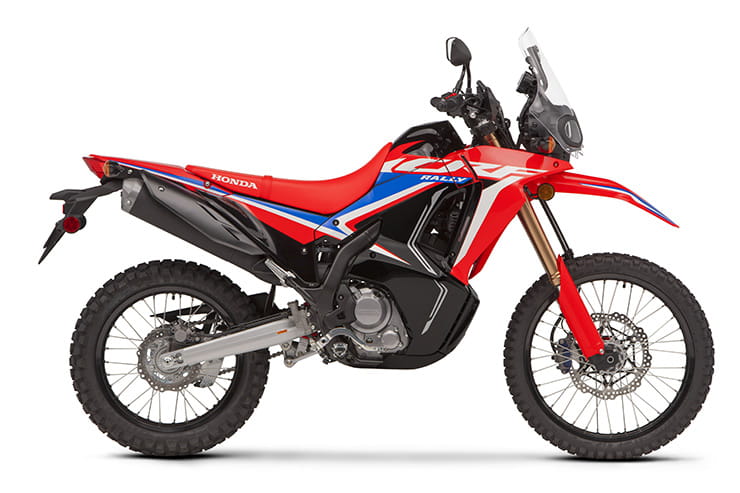 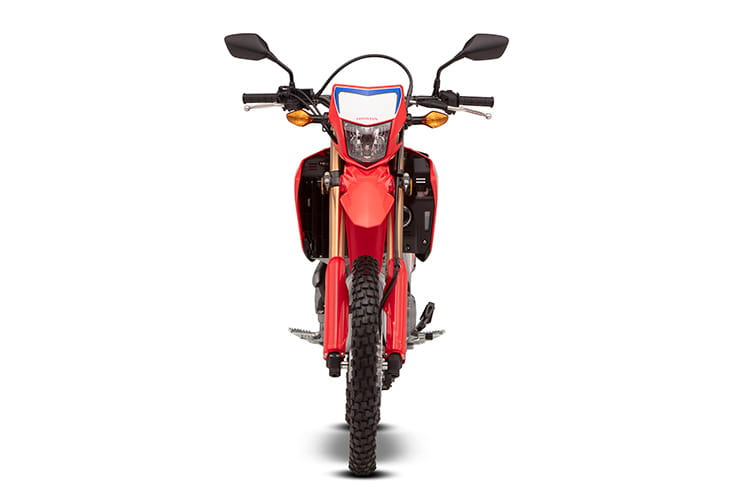 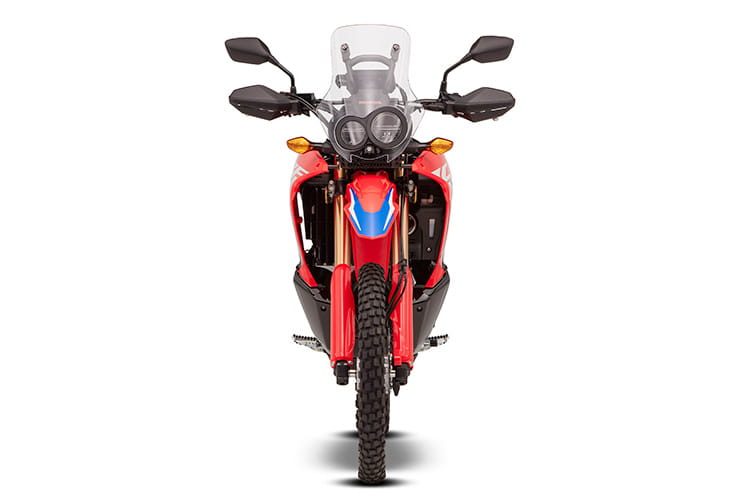 Capacity creep seems to be a theme of 2021’s new bikes as ever more new models are launched with upsized engines – and the new Honda CRF300L and CRF300 Rally are no exception.

Upping engine size is a reaction to Euro5 emissions rules, which are particularly hard to achieve with small, high-revving engines. Increasing capacity means bike firms can use less extreme valve timing while still seeing a useful boost in power and torque, and that’s precisely what Honda achieves with the new CRFs, which replace the old CRF250L and Rally models. 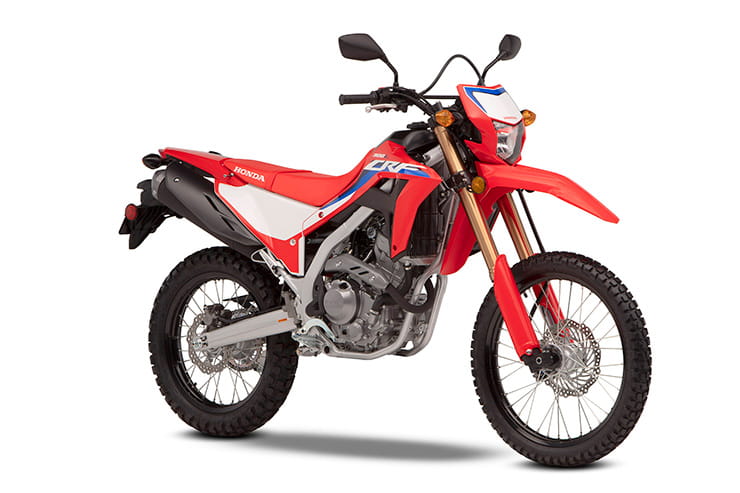 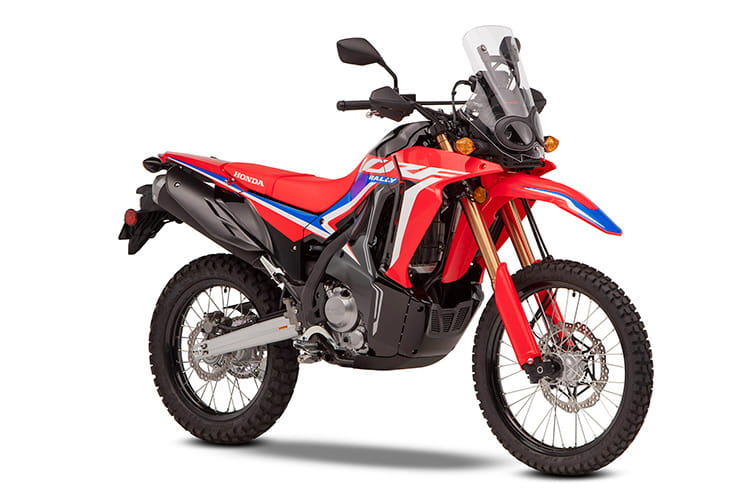 Revised intake cam timing and lift, a new air filter and exhaust, plus revised ignition timing, complete the engine changes, while the transmission is updated with shorter ratios for the first five gears for stronger acceleration and a taller sixth to cut revs at highway speeds.

While it appears much the same as the old one, the chassis is also completely revamped for the 2021 models. Surprisingly, perhaps, it’s been made less rigid with the aim of improving traction. The main downtube is 30mm narrower, while the lower downtubes are 3.2mm thinner than before. The frame’s central brace is also 20mm slimmer than its predecessor.

As a result of all that, the frame loses 25% of its lateral rigidity. The same thinking is also applied to the alloy swingarm, which loses 23% of its rigidity laterally and 17% of its torsional stiffness. The changes mean the frame is 2.15kg lighter than before and the swingarm is 550g lighter. New Showa forks with 10mm more stroke are added, while ground clearance rises by 5mm on the Rally, to 275mm, and 30mm on the CRF300L to 285mm.

All in all, both models are 4kg lighter than their predecessors, with the CRF300L coming in at 142kg and the Rally at 153kg (wet). 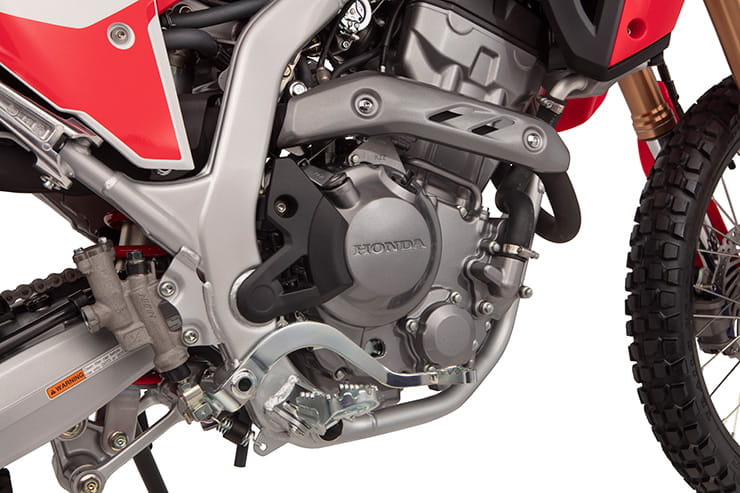 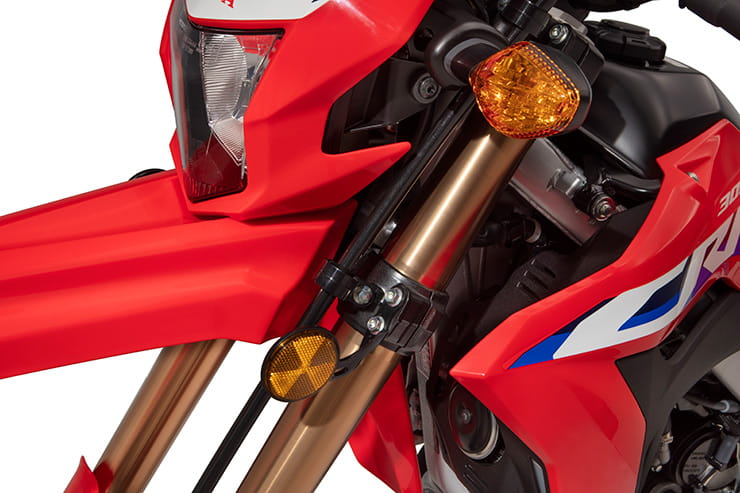 Above: the CRF300L’s engine and fork tops

Both models get new bodywork, too. The Rally takes its inspiration from Honda’s Dakar racers, featuring much the same headlight and front end as its predecessor but gaining a redesigned tail section. The tank is new, too, with a 12.8 litre capacity, up from 10.1 litres, to boost range. 250 miles should be within reach on a single tank thanks to the bike’s official fuel economy of just over 90mpg.

The CRF300L gets a new nose with a smaller, vertically-stacked headlight design, along with a new tank, side panels and seat unit to reflect the latest look of Honda’s motocross range. While its tank is the same 7.8 litre capacity as the old model it’s redesigned to be 190g lighter and slimmer between your knees.

Both bikes get revisions to the riding position, with bars that are pulled back more, foot pegs that are lower and further back, and altered seat heights. The 300L’s seat rises from 875mm to 880mm, while the Rally’s drops from 895mm to 885mm.

A new LCD instrument panel, shared by both models, completes the 2021 changes, with larger readouts than the old version.

Both models are due in dealers in January 2021, with prices set to be confirmed soon.