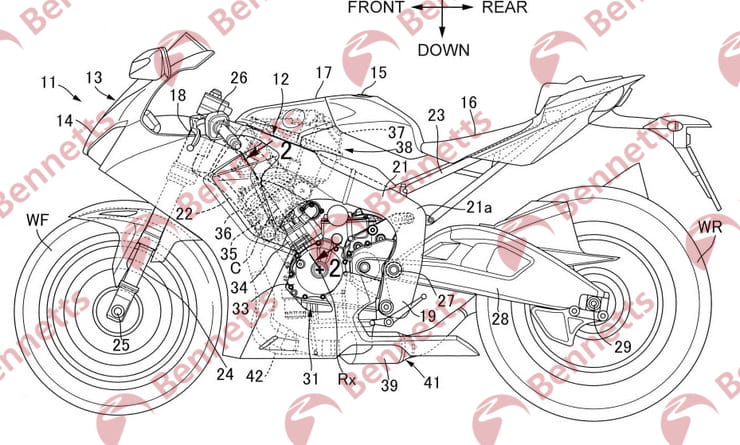 The current generation of 1.6-litre, turbocharged V6 F1 power units are without doubt the most advanced internal combustion engines ever built. Just four manufacturers have made the vast investment needed to create them and while Honda is pulling out of the series after 2021 it’s already looking at how to transfer the technology developed for the series onto production vehicles.

While you might imagine cars would be the beneficiaries, in many ways bike engines are closer to the high-revving, high specific power designs used in F1, and at least one of the key technologies from the latest era of F1 is set to make the leap to production bikes in the near future.

The tech in question is called pre-chamber ignition, and it allows engines to use leaner mixtures and higher compression ratios, giving more power while using less fuel. 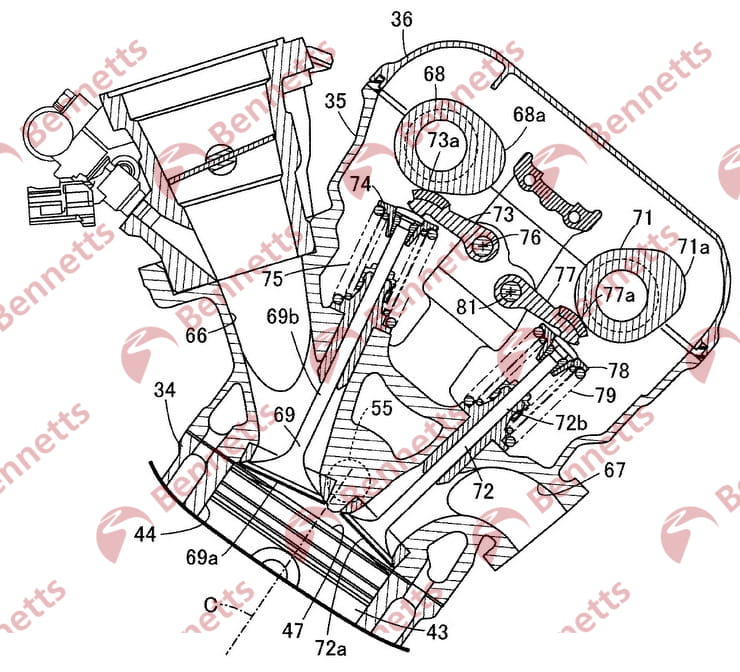 Getting the right mixture of air and fuel into an engine is one of the greatest challenges in maximising performance. In theory there’s an ideal stoichiometric ratio – 14.7:1 – of air-to-fuel, but engines typically run rather richer than that (i.e. with more fuel) to keep cylinder temperatures down and to reduce the chance of knock – also known as ping, pinking or detonation – which happens when the mixture in the combustion chamber explodes rather than burning in a controlled way. The explosion from knocking can reduce power at best or blow a hole in a piston in the worst scenarios.

Pre-chamber combustion, as used by all current F1 engines, is a solution that allows the spark plug to ignite a very small pocket of rich mixture, with more fuel in it, and then allows jets of that burning mixture into the main section of the combustion chamber – filled with a much leaner mixture – to ignite it without causing knock. The result is a more powerful, cleaner-running and more economical engine. 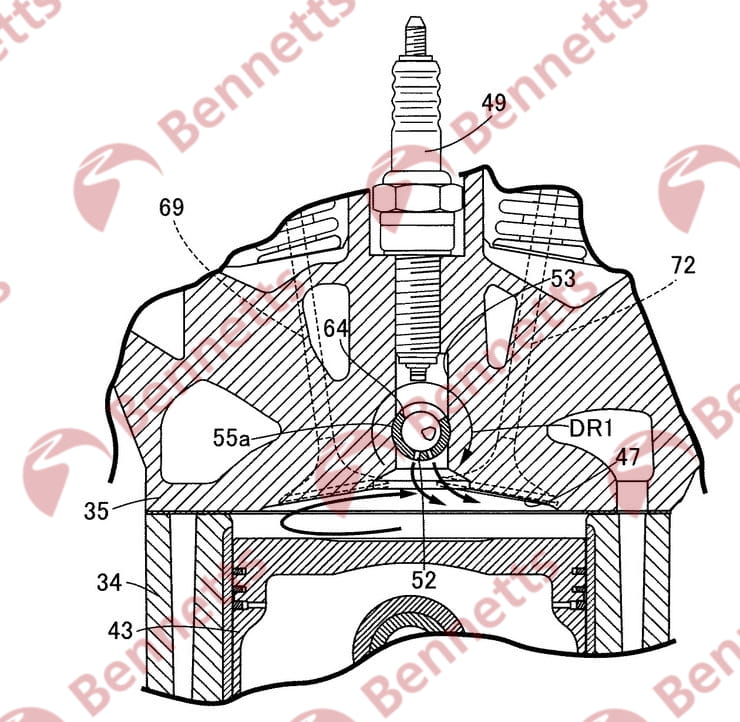 In F1, the issue of pre-chamber combustion is complicated by rules that only allow designers to use one fuel injector for each cylinder, which makes it hard to have the required rich mixture in the pre-chamber and lean mixture in the main combustion chamber. Unfettered by that problem on road bikes, Honda has designed a system – revealed in new patent applications – that uses two injectors per cylinder.

The first injector is completely conventional, firing fuel into the intake air just under the throttle butterfly, so it enters the cylinder through the inlet valve just as on every modern bike engine. The trick comes in the fact that there’s also a second injector mounted in a small pre-chamber above the main combustion chamber. The spark plug also emerges into the pre-chamber, and a there’s a rotating shield driven by the cam chain that selectively separates the pre-chamber from the main combustion chamber.

This is where the Honda bike engine design is very different to F1 tech. The rotating shield is basically a tube with carefully positioned holes drilled in it, so it does several things at different stages of the engine cycle as it turns.

The main part of the shield, which effectively forms the top centre section of the main combustion chamber, has a large hole on one side. It’s presented to the combustion chamber during the exhaust and intake strokes – allowing the pre-chamber to be cleared of exhaust and refilled with fresh (but lean) mixture.

During the compression stroke, a the shield turns to present a closed section to the main combustion chamber, while a small hole near the pre-chamber injector opens to allow a squirt of extra fuel into the pre-chamber.

At the moment of ignition, the large hole is at the top of the tube-shaped shield – opening the now-rich mixture inside it to the spark plug above – and an array of small holes aligns with the top of the main combustion chamber. When the spark plug fires it ignites the rich mixture in the pre-chamber, and that expanding, ignited mixture shoots out in jets through the small holes – spreading through the lean mixture inside the main combustion chamber to ignite it in a controlled way. 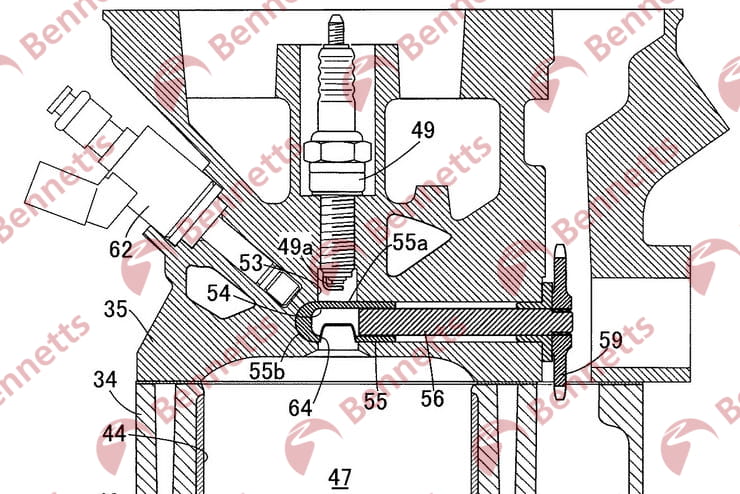 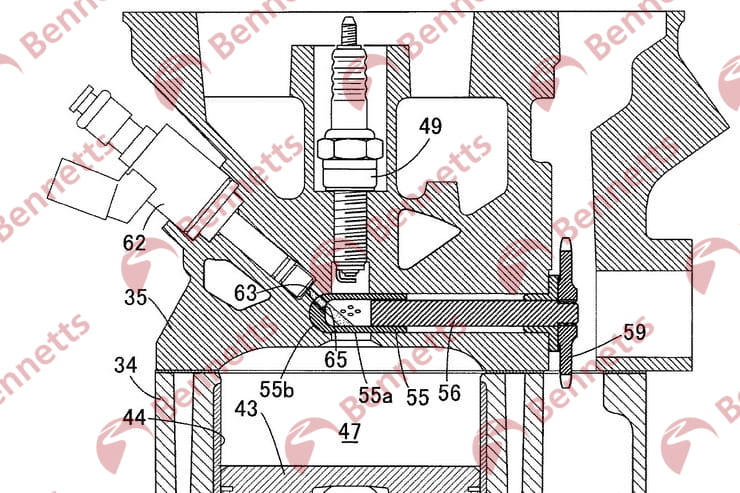 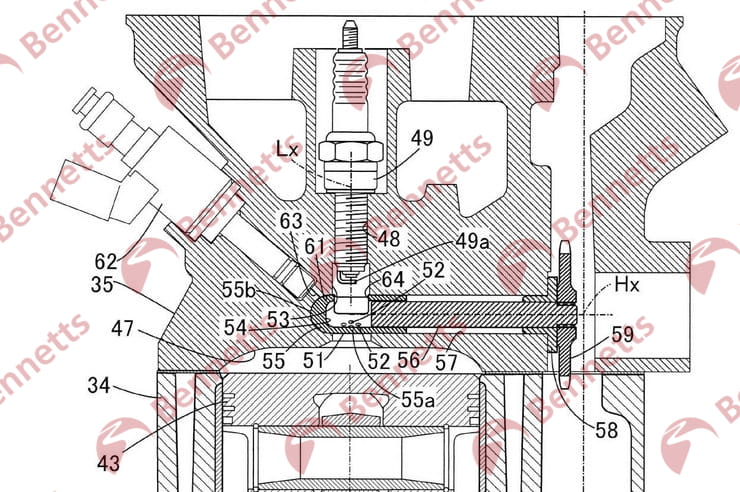 While F1 has brought the idea of pre-chamber combustion to attention recently, Honda’s dabbling with the same thinking dates much further back – with Soichiro Honda himself overseeing the development of the firm’s ‘CVCC’ system in the early 1970s. CVCC (compound vortex controlled combustion) reached production in the 1970s Honda Civic. Although it used a carburettor instead of injection, CVCC featured a pre-chamber, where the spark plug was fitted, and a second, small inlet valve that allowed a richer mixture into the pre-chamber than the charge that entered the main combustion chamber.

CVCC allowed Honda to meet 1975 US emissions limits without using the expensive, heavy and power-sapping catalytic converters that all its rivals had to adopt.

Although the firm’s new patent application doesn’t specifically say what bikes it might be intended for, the illustrations clearly show the outline of the latest-generation FireBlade, suggesting that high-performance bikes are likely to be the main target for the technology.