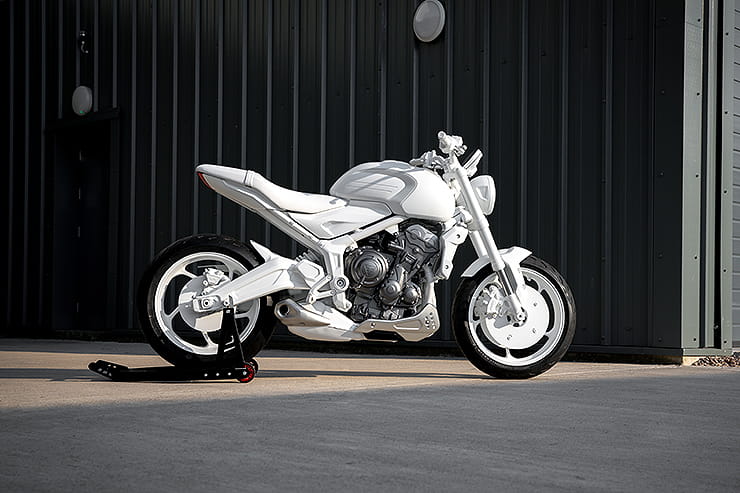 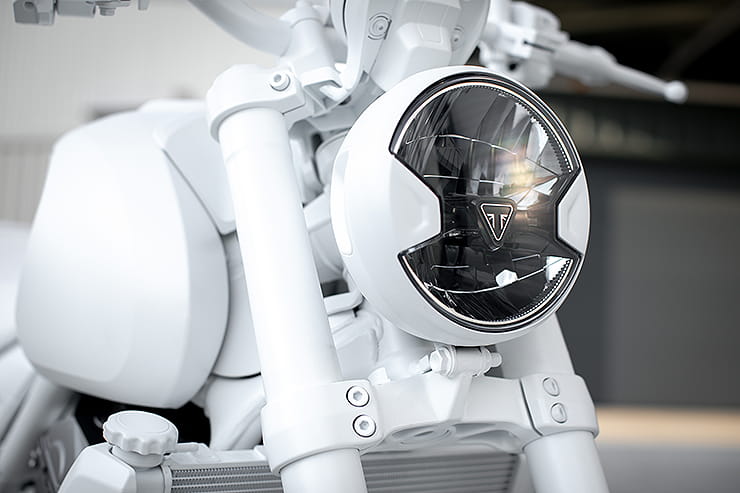 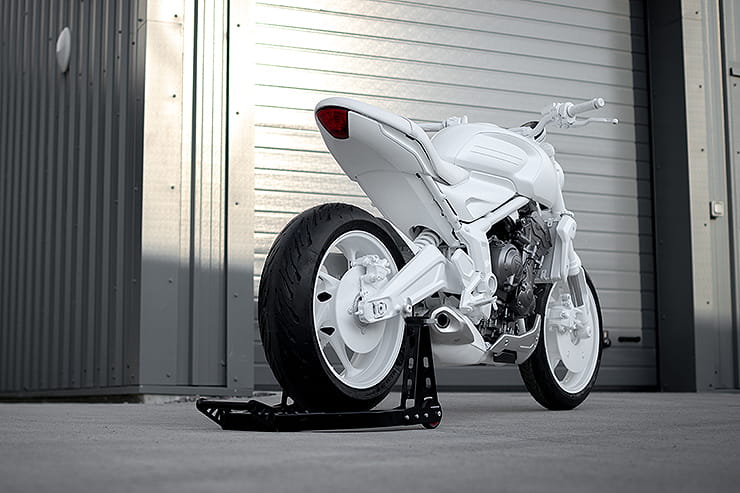 Make no mistake, Triumph’s new Trident prototype, unveiled to the press last week and due in dealers by early 2021 is one of the most significant models in the Hinckley company’s 30-year history.

The press event was short on detail, there were no answers to questions regarding exact price, engine capacity, power or torque figures, weight, electronics or suspension. But what was stressed on several occasions was that this new model will be priced very competitively against the competition. And that competition is Kawasaki’s Z650, Suzuki’s SV650, Honda’s CB650R and Yamaha’s all-conquering MT-07, all of which are on sale between £6-7000.

Triumph has always been smart with their model range and chosen their sectors carefully, but this is the first time they’ve gone for this high-volume, sensibly-priced mainstream chunk of motorcycling. Get it right and there are clearly profits to be made. And, because many of the bikes in this category are sold to new(ish) riders as maybe their first big bike (or first brand new big bike at least) it’s all about economies of scale and that’s something Triumph has been getting very good at in recent years with their classic twins range. Here’s what we know so far… 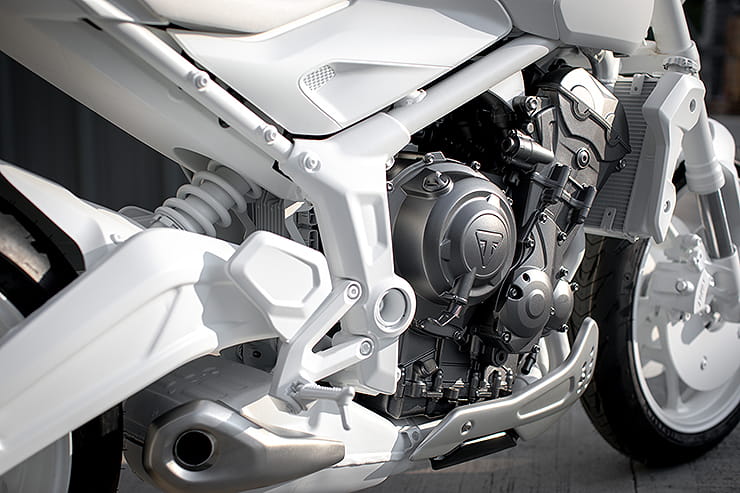 We don’t know the numbers yet, but suspect it’ll be a Euro-5 compliant 675cc motor making around 90bhp

Truth is, we don’t know. Triumph were happy to show that the new Trident has three cylinders, but apart from that, we’ll have to wait a few weeks for the capacity, power and torque figures. There’s a certain irony for old British bike riders in Triumph trumping the Japanese middleweight twin market by adding additional cylinders, and capacity could be anywhere between 675, 765, 800 and 888cc.

BikeSocial’s guess is a return to the 675cc unit, which was killed-off as a sportster by Euro-4 emissions requirements, but would make sense in this (probably) lower powered version and would maintain a distinction between the cheaper Trident and more expensive 765cc Street Triple (which starts at £8000 – likely to be around £1000 more than the Trident).

Finger-in-the-wind figures would be around 90bhp and 50lb-ft of torque (Yamaha’s MT-07 claims 72bhp and 50lb-ft), which should be achievable from a Euro-5 spec 675 motor. 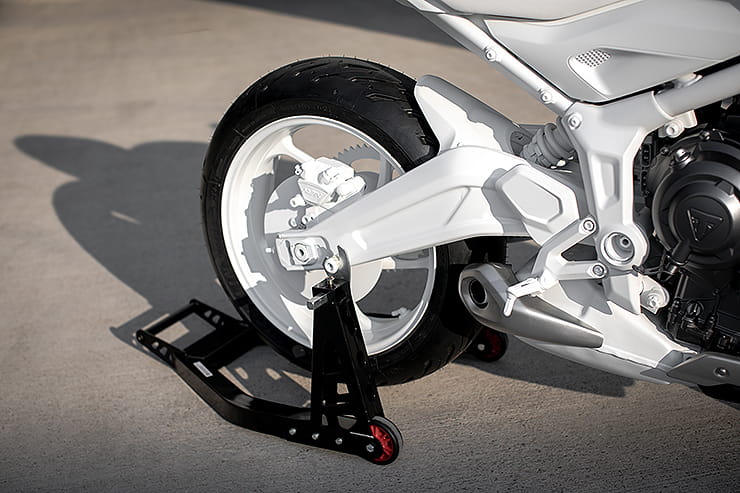 Long swing-arm should add stability to an otherwise short chassis

The prototype shown (which Triumph were hinting is very close to being finished and signed-off) has a simple steel cradle chassis that looks a little like Suzuki’s old Bandit. Upside-down forks with no adjustment and a very long, sporty-looking swing-arm. The smart thinking here is that a short chassis with a long swing-arm allows quick turning, but with stability too.

In the flesh the Trident looks small, low and narrow where it counts, while still feeling substantial enough to have big-bike credibility.  The handlebars are set higher and wider than the sportier Street Triple and its been at least 20 years since Triumph made a bike that didn’t handle well, so expect the Trident to be fun in the corners and give its rider absolute confidence.

The lower-spec Nissin brakes fitted to the prototype were representative of what you get in this class. And that’s fine because riders still building their experience benefit from brakes with feel rather than race-replica, nose-standing power. 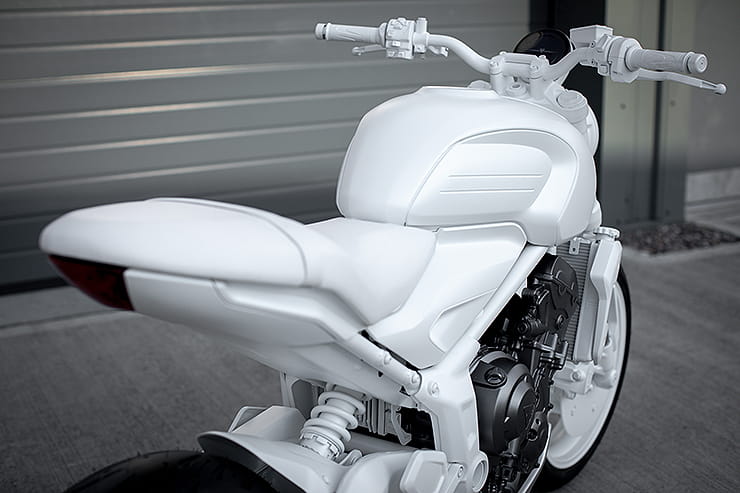 It’s hard to judge the styling when all you’ve seen is a prototype with everything painted white. What we can see is that the back end is sleek and slim, like a funky sportster. Triumph says the number plate hanger will be mounted on the swing-arm (like Honda’s CB1000R) to keep the back-end clean and simple.

In contrast, the fuel tank, handlebars and single round instrument binnacle are closer to Triumph’s classic range, like the Street Twin. It’ll be fascinating to see what the finished bike looks like in proper paint schemes. 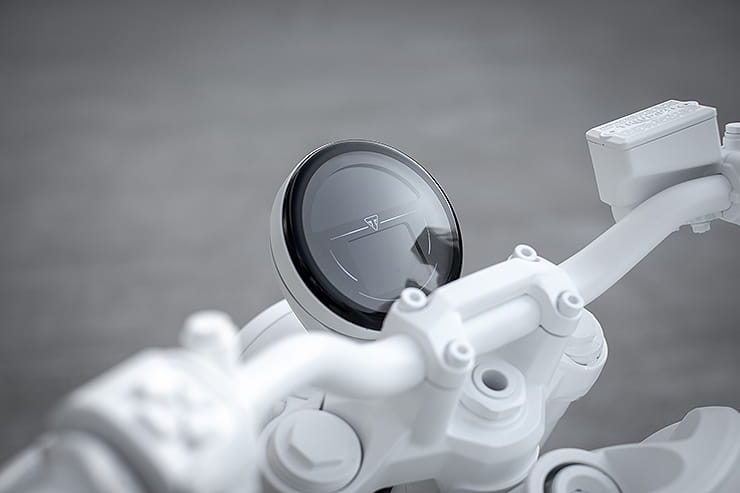 Don’t expect too many rider aids on a bike at this price. ABS is legally required, and Triumph may add rider modes and traction control. What they did say was that it will have the connectivity that this (younger) market expects, so expect Bluetooth and maybe even Triumph’s Go-Pro controller too. If the instrument unit is TFT, that’ll be ahead of all the competition apart from the Kawasaki Z650.

Hopefully, we shouldn’t have to wait too long for more information. Triumph are promising us more details and specs in the next few weeks, a full unveiling in the autumn, riding launch for the press before the end of the year and for the bike to be on sale in dealers by early 2021.

What do we make of it so far?

There’s been talk of Triumph building smaller bikes for the new-rider market for many years. And, looking at the emerging far-eastern markets there’s a lot of potential for an affordable lightweight machine. BMW and KTM filled that hole in their range by partnering with local manufacturers in those markets, Triumph has so far stayed clear.

The Trident is a different approach, aimed more at the European and American markets and designed to be recognisably a Triumph rather than a collaboration. Strangely, the other European manufacturers are yet to take on the Japanese in this (price) sector. Whether the Trident is successful won’t be down to the quality of the bike – Triumph are smart enough to know how to build a good motorcycle. In this sector its all about getting the economies-of-scale right, being bold with the pricing and finance deals and holding your corporate nerve (and high-value price-point) for long enough to get it established.

Yamaha got it absolutely right with the MT-07. A brilliant bike, priced very competitively at launch, meant they sold boatloads and kept demand high. That demand also kept resale values strong which allowed them to gently nudge up the price and still sell plenty.

Other manufacturers who price too high, end up with unsold stock that then gets discounted, killing resale values, which in turn requires even bigger discounts on the new bikes because of the discounted last-years models still stuck in showrooms.

We can’t wait to ride it… 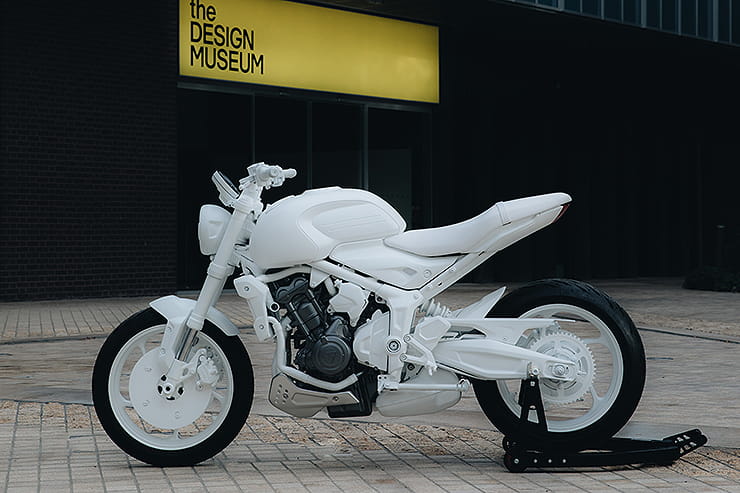 Imagine this, painted in cool triumph colours, for the same money (ish) as a Kawasaki Z650