The Isle Of Wight Diamond Races: Will It Happen? The Big Questions Answered 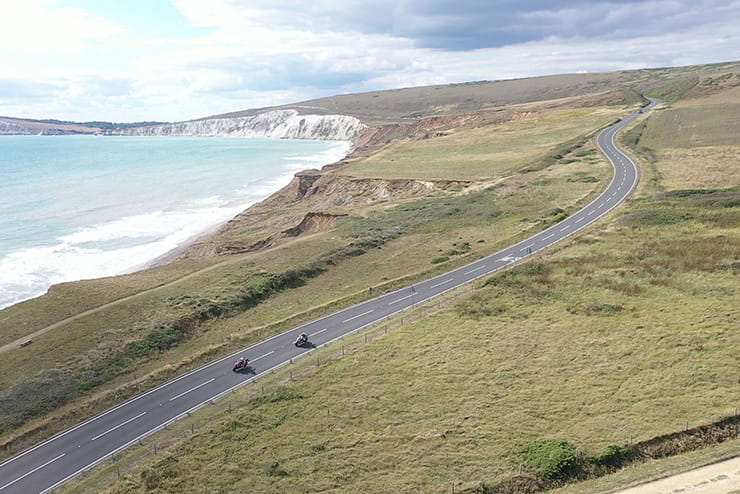 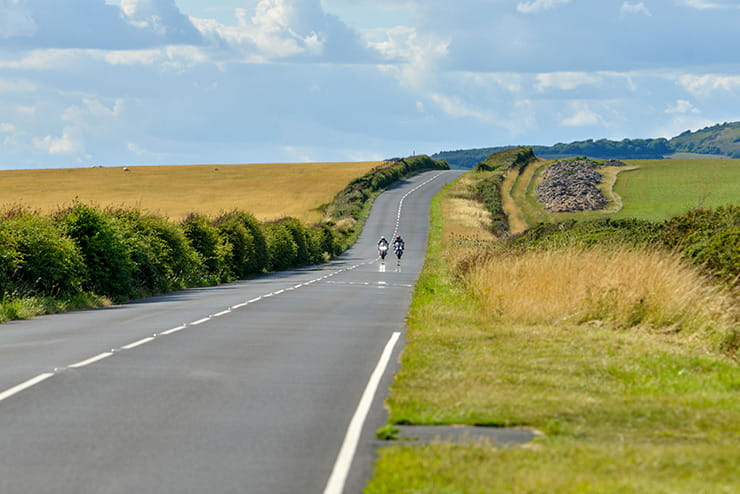 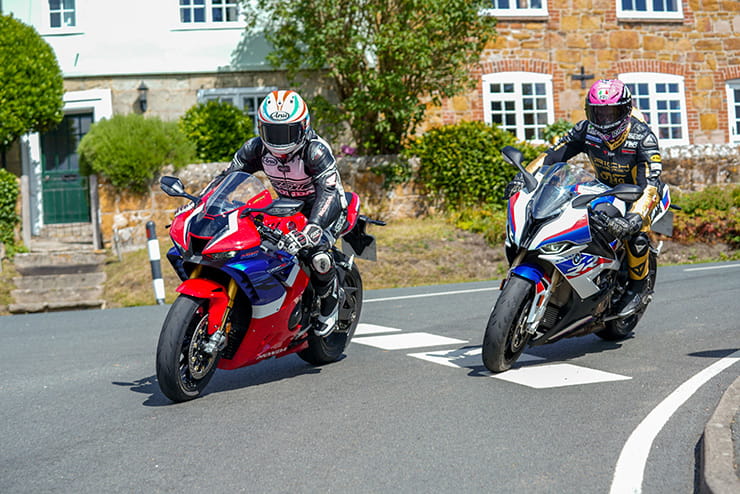 The recently announced Isle of Wight Diamond Races sound like a road race fan’s dream. But with plans underway to host the inaugural races in October 2021, Bennetts BikeSocial’s Steve Rose and Simon Hargreaves spent the day on the Isle of Wight to speak with Diamond Races CEO Paul Sandford, and to look at the economic, safety and policing challenges faced by the organisers and asks the all-important question: will it actually happen?

What are the Diamond Races?

It’s a TT-style road race, on closed public roads, to be held annually on the Isle of Wight from October 2021. 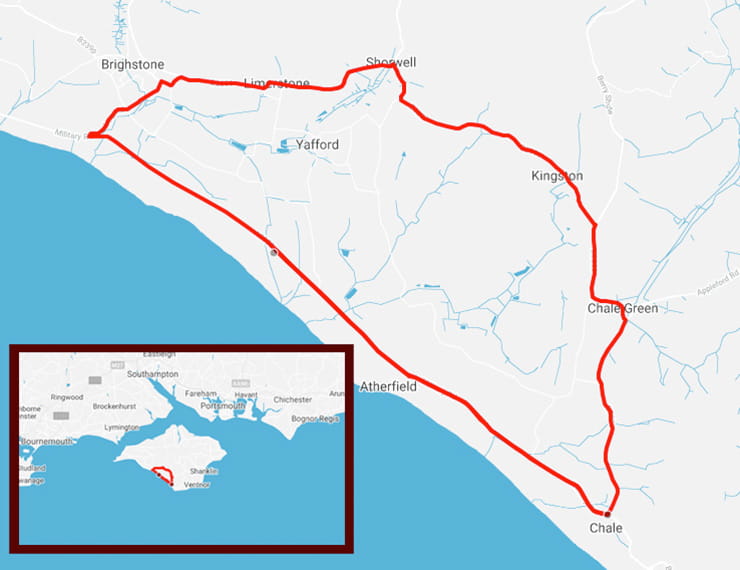 How long is the circuit?

It’s an anti-clockwise 12.4-mile loop in the southern half of the island, broadly split into two sections: the long, very fast, open Military Road section of around five miles running parallel to the coast, and the back section of the circuit that passes through farmland and several villages. The road surface is excellent with smooth, clean tarmac, no mastic over-banding, and few manhole covers. But while the Military Road is fairly straight-ish (with a couple of kinks, blind crests and bends), much of the back section is single-track, twisty, and incredibly narrow – and with no pavement, roadside hazards such as hedges, banking, trees, front gardens, walls and driveways butt up against the proposed layout. The start/finish line will be on the Military Road, but its precise location has yet to be determined and depends on the final location of the paddock facilities.

Bikes will start with a ten-second interval, as per the TT. There will be three classes, and six races on one day (two races per class). The classes will be Superbike (to Superstock spec), Supersport 600 and Lightweight (Supertwins). The races will be in October (between the last round of Bennetts British Superbike at Brands Hatch and the Macau GP) – but the exact date has yet to be established. The plan is to hold a familiarisation and briefing day on a Tuesday, practice on Wednesday and Thursday, rest day on Friday, and races on Saturday. 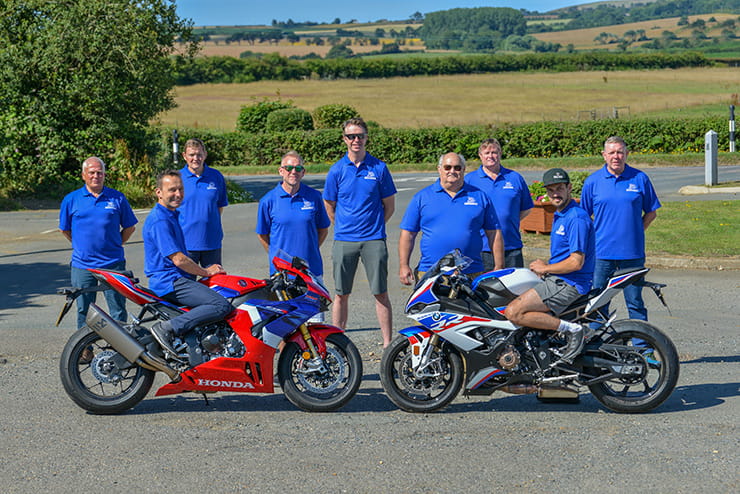 The Diamond Races is the idea of island residents and ex-British Touring Car Championship drivers Matt Neal and James Kaye, who wanted to bring a motorsport event to the island. With obvious similarities to the Isle of Man, the attraction of hosting a TT-style road race made sense. They got together with local businessman Paul Sandford, and enlisted a team of road-racing experts including TT Clerk of the Course and ACU General Secretary Gary Thompson, ex-TT champ Steve Plater, and ex-Castrol Honda boss Neil Tuxworth, to bring the idea to life. 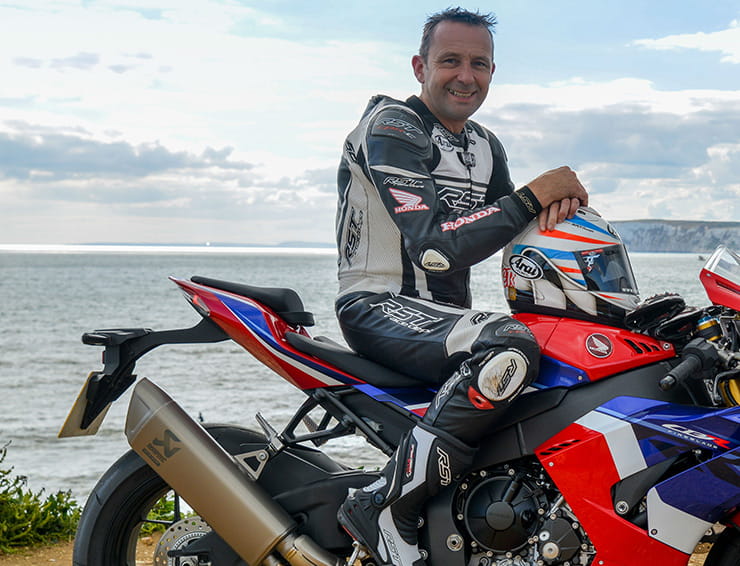 Who chose the circuit?

The ‘Chale Course’ was selected by Steve Plater, Neil Tuxworth and Gary Thompson, as one of several courses. A shorter course was considered, but the logistics of starting the grid at 10-second intervals dictated a longer circuit.

Why’s it called the Diamond Races?

Because the island is diamond-shaped. Ish. 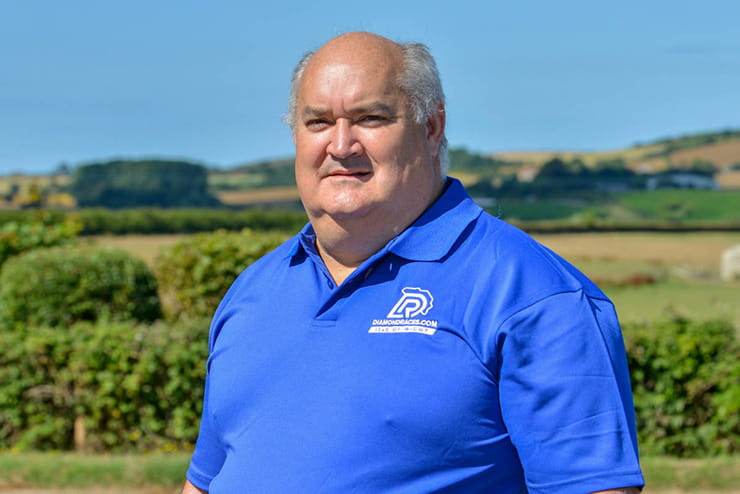 Will this be another event like the ill-fated Welsh TT from a few years ago?

[The failed bid to hold a road race in Wales – the Eppynt Welsh Road Races – is still fresh in people’s minds, especially those who booked holidays around it. That failed because the ACU asked for a list of requirements from the organisers that wasn’t possible within the timeframe, and the plan folded]

According to Diamond Races’ CEO Paul Sandford, no it isn’t. He says the ACU have officially sanctioned the circuit (having Gary Thompson, the ACU General Secretary, as part of the organizing team probably helps with that), and that the Isle of Wight council are, “...fully supportive of what we’re doing. We’ve been working in lock-step with them for more than 12 months.” 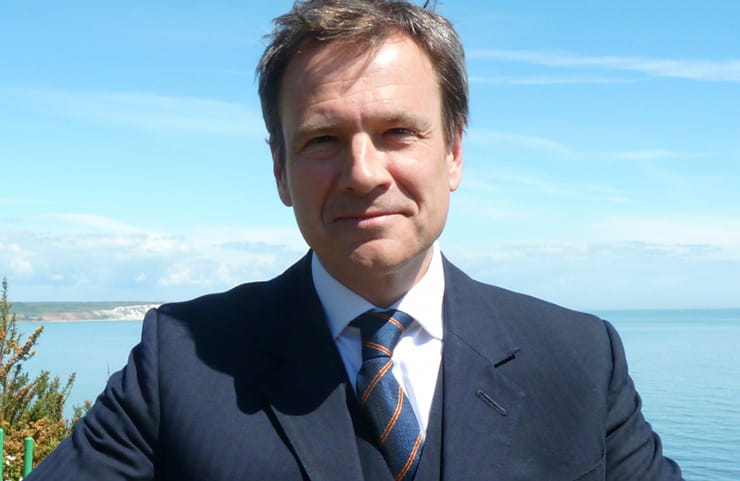 What does the local MP, Bob Seely, have to say?

As it happens, Seely lives in one of the villages directly on the proposed circuit, so he has skin in the game. He’s been quoted as saying, “Press releases do not amount to community engagement,” and, “We have significant noise and speed issues on the Military Road as it is, which affects the lives of residents along and near it and damages businesses. There are also noise and speed issues on roads elsewhere on the Island. Unless long-term funding for noise and speed measures are included on at least the Military Road section, I fear this race may turn the route into a race track all year round.”

That doesn’t sound promising – but, as an elected official, Seely will be keenly aware of the need to sit on the fence until the weight of public opinion has been determined. And he isn’t the final arbiter – that’s down to the Isle of Wight council.

But to be fair, the Isle of Wight isn’t the Isle of Man; it has no tradition of motorsport, and no open speed limits. Also, the Isle of Wight is 30% smaller than the Isle of Man, but has a nearly 70% bigger population. The concerns about rampaging bikers and speeding motorcyclists causing chaos on the roads, if we’re honest, have a grain of legitimacy – it only takes one idiot. You can see why they’d think that, especially if they’ve tried to drive a car across the Snaefell Mountain on Mad Sunday.

What do the Isle of Wight residents say about the Diamond Races?

On a recent trip to ride the circuit, we spoke to several locals who live on the circuit – some of whom actually approached us, they were so keen to chat. Three were local motorcyclists, two were retired locals. All were unanimously and emphatically enthusiastic for the event – which bodes well. However, all five acknowledged significant opposition from other residents – borne out by reader comments on local news websites. It was also pointed out a community motocross track, located next to the Military Road, was recently forced to close after noise complaints – even though it claims to have met required noise levels. And we all know it only takes a vocal minority to stop an event dead in its tracks, so to speak, even if the event has broad support. 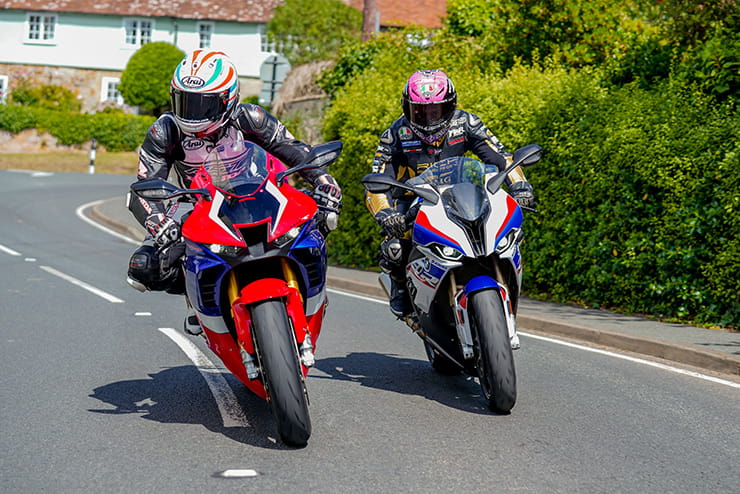 Above: Steve Plater and James Hillier take on the Chale Course

How do the race organisers plan to counter the opposition?

Diamond Races CEO Paul Sandford again: “There will be some, but at the end of the day we’ll work as closely as we can with them to make sure they’re happy, and prove to them we’ve mitigated all their concerns. I can’t say we’re going to satisfy everybody, but I’m going to work very hard to do that.

“We have a lot of public engagement right from the get-go. We’re engaging specifically with residents on the course and educating them, and partnering with them. They’re very much partners in the project and what we plan to achieve. We’re also going to be supporting them massively, in a range of ways – one of the things we’ll be doing is putting in digital support using an app we’re building. It’ll have things like road closures on there, useful bits of advice such as keeping pets under control. But we’re also trying to get them to see this as a means of benefitting them – they can host visitors, and we’ll support them in that. I don’t know if it’ll be a culture shock for them because it’s very much a tourist island, and people expect it.”

BikeSocial’s view is, despite Paul’s assurances, it will take more than an iPhone app to appease the NIMBYs – a door-stepping PR campaign by motorcyclists will be needed to win over concerned and affected residents.

Who’s paying for all this?

The organisers themselves say the cost of the event will run into millions – between two and five is their estimate (which is a fairly wide target; you’d hope they’ve costed it a bit more precisely than that). There are considerable works needed on the circuit – thousands of cat’s eyes to be removed and telegraph poles and road signs to be relocated – let alone the cost of marshaling, barriers, fencing, building grandstands and paddocks, acquiring land usage rights... it’s a colossal undertaking.

To pay for it, Paul Sandford says they’re looking for sponsors from the private sector, with no public money so far – but that working alongside local enterprise may unlock development funds. “We kept everything under wraps deliberately until now, but since launching we’ve been inundated with people reaching out and wanting to be engaged. We’re working through those. We’re confident we’ll achieve what we want.

“We’ve had no trouble persuading the business community of the benefits. We’ve all got the community in our hearts and community is at the heart of what we want to deliver. The island is about to face an economic tsunami. The Covid situation has devastated the visitor economy on the Isle of Wight. The Diamond Races could be a tremendous help in taking the island out of the hole it’s in.” 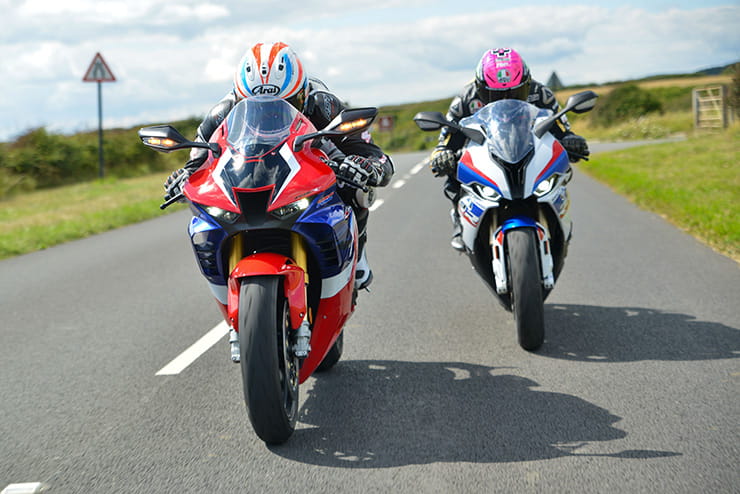 Above: Plater and Hillier on the Military Road

What do the police say about the event?

They must have significant concerns, but haven’t commented publically yet. Paul Sandford again: “Ultimately we have to satisfy the council’s Safety Advisory Committee, and to take on board all the views of the residents who’ll be affected. And above all, we’re going to have to be focusing a great deal on road safety – and making the island a safe place to ride and to drive. We can assist with engagement and help with education, but one thing we can’t do is enforce – the leader of the council, Dave Stewart, has put forward a strategy of Engage, Educate and Enforce. We can help with the first two but we can’t with the last. That’s a policing issue.

Is there opposition among motorcyclists?

Everyone in their right mind will be concerned about track safety and the impact on the wider image of motorcycling should the worst happen – and let’s not kid ourselves; this is road racing, and it does. Every year, the Isle of Man has to fend off pressure from tabloid sensationalism screaming for the TT to be banned – and that’s on an island with its own government that can, technically, do what it likes. The same scenario on the Isle of Wight could result in swift cessation of the event.

And not all figures in the racing world are on-board. Paul Denning, long time racing boss and currently running Yamaha’s World Superbike team, said on Twitter: “...the last thing bike racing and the bike industry needs is another road race. Riders risking literally all through the villages for a pay day... in October.” Other race bosses – and some riders – have also expressed reservations (just not on Twitter). 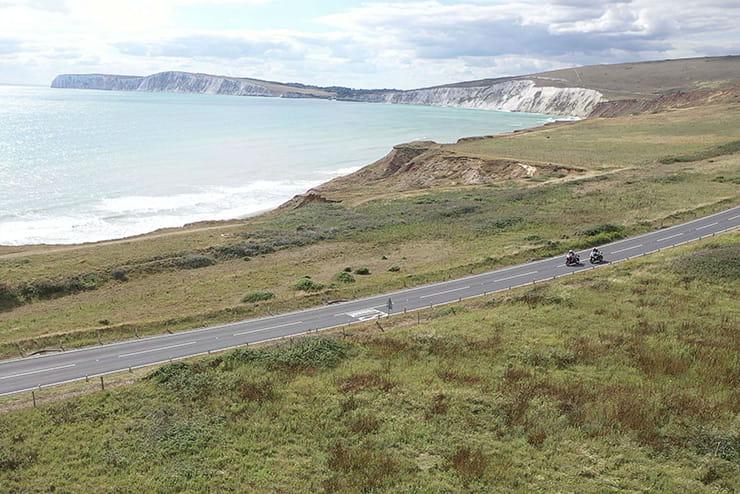 Above: The spectacular Military Road from above

So, will the Diamond Races actually happen?

With the right track safety, the right planning and investment, and the right behavior from both island residents and visiting motorcyclists, then yes – the Diamond Races could be a glittering addition to the racing calendar, and both give bike fans a new destination and reason to be excited, while delivering an economic benefit the island needs.

But if one of the many things could go wrong do go wrong and the event collapses – and you’ve already booked your holiday on the Island... well, it’s still a nice place to visit.