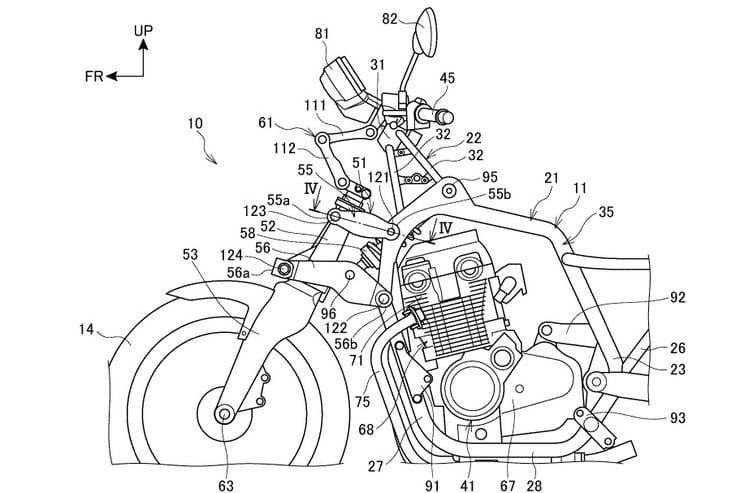 In developing the latest-generation of Gold Wing Honda’s engineers decided that a variation of Hossack-style front suspension – with a steerable upright supported on two chassis-mounted wishbones – would be better than telescopic forks. Now it looks like the company is experimenting with the idea of spreading that system to more models.

Newly-published patent documents from both Japan and the USA show variations of the Gold Wing’s front suspension fitted to a CB1100 and to a C125 Super Cub; bikes with very different mechanical layouts that place a variety of demands on their steering and suspension. So what’s the thinking? Is Honda considering a wholescale move away from telescopic forks and into the realm of ‘funny’ front ends? 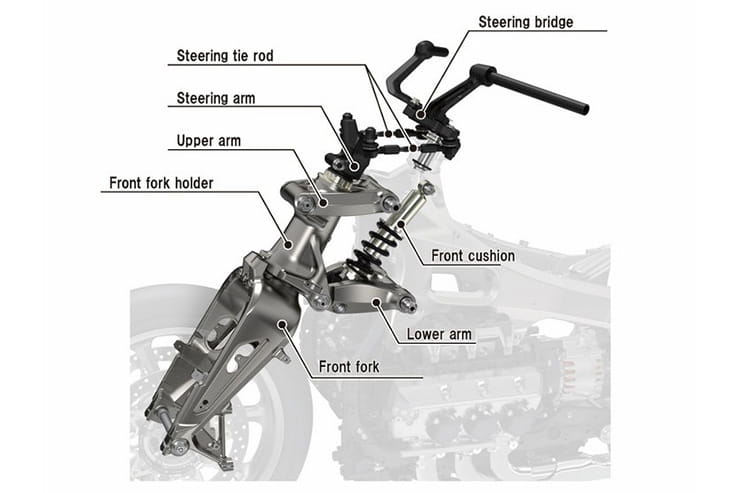 On the Gold Wing, the decision to move to a Hossack-style front – best known from BMW’s use of another variation on the idea in the form of its Duolever-equipped K1200, K1300 and K1600 models – made a lot of sense. The Wing presents a specific set of problems; it’s vastly heavy and needs a soft, luxurious ride. With conventional telescopic forks, that would be a recipe for lots of dive during braking, simultaneously putting massive bending stress on the forks and headstock.

Using Hossack suspension means those forces are transmitted to the frame lower down via the suspension wishbones, reducing the leverage that would be applied by conventional forks, and the huge cast alloy fork that holds the front wheel isn’t going to flex. Honda added its own twist to the idea with a different method for mounting the wishbones to the fork, but otherwise the setup is familiar to anyone who’s looked at a Duolever front end.

While the Gold Wing’s unique design means it was particularly suited to this sort of front end, Honda’s latest patents show the firm is also thinking about whether other bikes could benefit, right down to the cheap, lightweight C125 Super Cub. 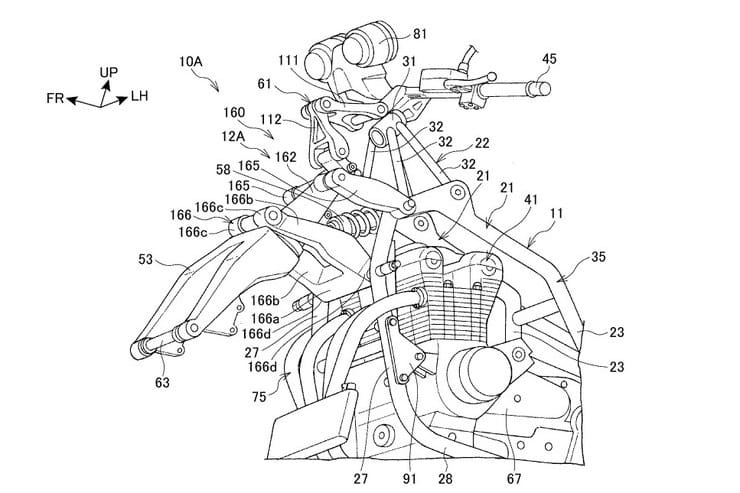 It seems to be the last bike in the firm’s range that would benefit from the layout. It’s not a particularly high performance model, nor does it have a special emphasis on either comfort or handling. The CB1100’s forte is its classical styling, and that’s the first thing to go out of the window when the telescopic forks are changed for a Hossack front end.

So why do it? The answer is that what Honda is really looking at here is how to combine the unusual front end with a transverse four-cylinder engine. On the Goldwing, with its flat six power unit, the low-mounted engine doesn’t get in the way of the rear mounting points for the wishbones or the front shock. That’s not the case when the engine is a transverse inline four like this – the cylinder head gets in the way.

Compared to the Gold Wing, the steering system is also changed. The Wing’s bars are mounted much further back, pivoting near the shock’s upper mount, so a pair of horizontal links, parallel to the wishbones, is all that’s needed to connect them to the forks. On this new design, the bars are above the forks, so a scissor-style hinged steering link – much the same as used by BMW on the Duolever – is needed to transmit steering forces.

The patent suggests that the Hossack-style front end offers better comfort than conventional telescopic forks, while the specifics of the Honda design allow for increased steering lock. 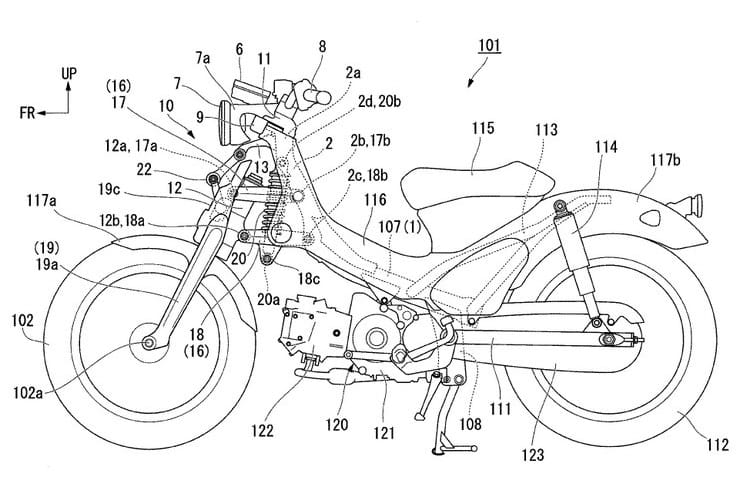 The second patent shows the same basic system redesigned to suit the very different requirements of the C125 Super Cub.

Here, the engine’s position doesn’t place constraints on the positioning of the front suspension’s wishbone mounts, so Honda has used a quite different layout with the shock mounted almost vertically and the lower wishbone positioned further back than the upper one.

The advantages of the system, as with any Hossack-style front end, are the ability to retain a consistent wheelbase throughout the front suspension travel and to reduce the strain on the chassis – in turn presumably allowing it to be lighter and with a lower centre of gravity compared to a conventional design. The suspension also allows for more freedom for geometry that will reduce suspension dive, and reduces ‘stiction’ compared to conventional telescopic forks. 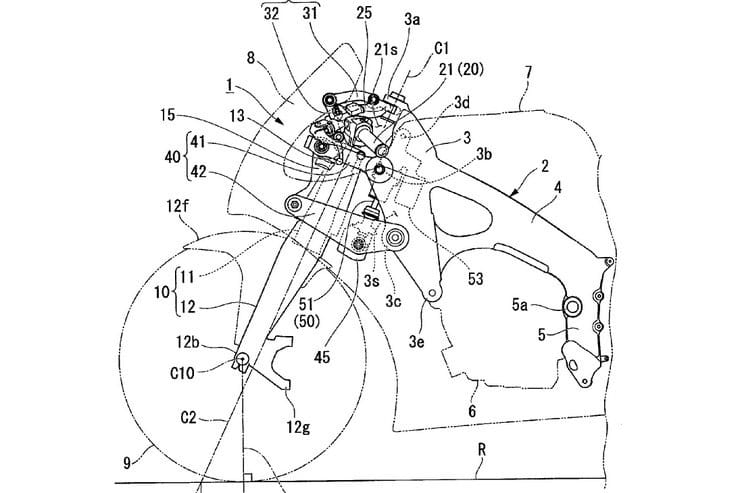 These new patents don’t necessarily mean that Honda is about to launch a new Hossack-forked CB1100 or Super Cub, but they do show that Honda has engineers working on the idea of using the system on other bikes.

And it’s been going on for a while. The Gold Wing reached production with the system in 2018 after a lengthy period of development, but Honda has filed several patent applications for similar ideas over the last five years or so. Back in 2016 Honda even designed a version of the system (above) to use on the RC213V MotoGP bike. It’s a sustained development effort which suggests there’s a significant faction within Honda’s R&D department that’s convinced Hossack-style front suspension has a much wider future than the Gold Wing alone.