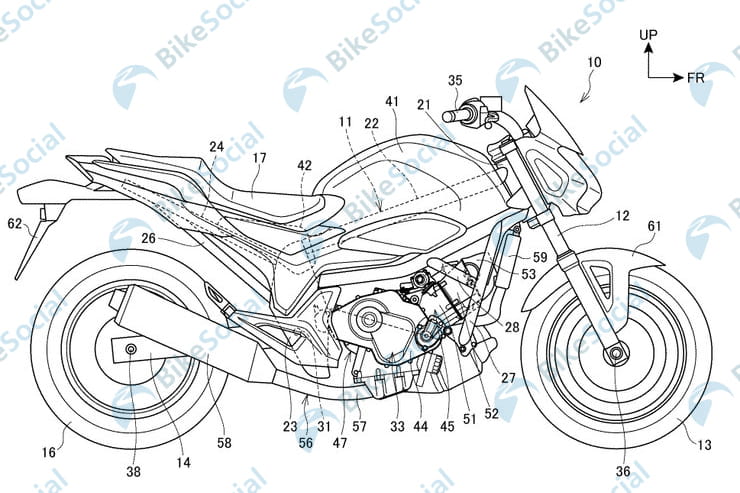 Honda’s NC750 range is widely rumoured to be in line to be replaced with a line of larger 850cc models in the near future. Now it looks like the firm is planning a clean-sheet redesign of its parallel twin engine to achieve that capacity hike.

Newly-published patent documents from Japan reveal that the firm is working on a completely new twin-cylinder engine to fit in a future range of NC750-style machines, making it even more compact and versatile than the existing design.

The NC750, which appeared in 2014 as a 745cc descendant of the 670cc NC700 models that first went on sale in 2012, is already the most ambitious example of platform-sharing in motorcycling. The same engine and chassis is shared across a range of bikes that spans almost every style on the market. Honda’s current range includes the NC750D Integra scooter, the NC750S naked bike and the NC750X adventure model, not to mention the oddball X-ADV scooter/adventure crossover, which uses the same parts under its mould-breaking skin.

Previously, the same underpinnings have also formed the basis of the naked CTX700 and faired CTX700N cruisers and the unclassifiable NM4 Vultus in two forms, the NC700J and luggage-equipped NC700JD.

What’s more, many of those bikes have been offered in both manual-transmission and semi-automatic form, using Honda’s innovative ‘DCT’ dual-clutch gearbox for seamless pushbutton shifts.

This animation shows how different the new engine is, but it’s clearly not really designed to fit the existing NC750 frame

It’s remarkable that a relatively low-powered parallel twin, designed for economy rather than emissions and bolted to a simple, tubular steel chassis can be applied to such a broad range of bikes, and more so that the resulting machines aren’t compromised by their shared components. Each model – perhaps with the exception of the controversially-styled NM4 – has been a success for Honda. That means it’s vital that the firm gets the next generation right, too.

The rumoured capacity hike to between 800cc and 850cc makes sense, as it will follow the pattern many other firms have followed while upgrading engines to meet Euro 5 emissions limits without losing performance, but the new Honda patents suggest that there’s much more to the forthcoming updates than a simple big-bore job. Instead there’s a completely new engine in the works.

The patent applications show a parallel twin that’s designed to lie much flatter than the current one. Although it’s pictured in an existing NC750 frame for the purposes of Honda’s patent documents, it’s fairly clear from the angle of the engine’s sump that it’s designed to be mounted on a flatter angle. That could increase the already substantial storage space above the engine in the NC750 models and make for a more convincing step-thru gap on the Integra and X-ADV. 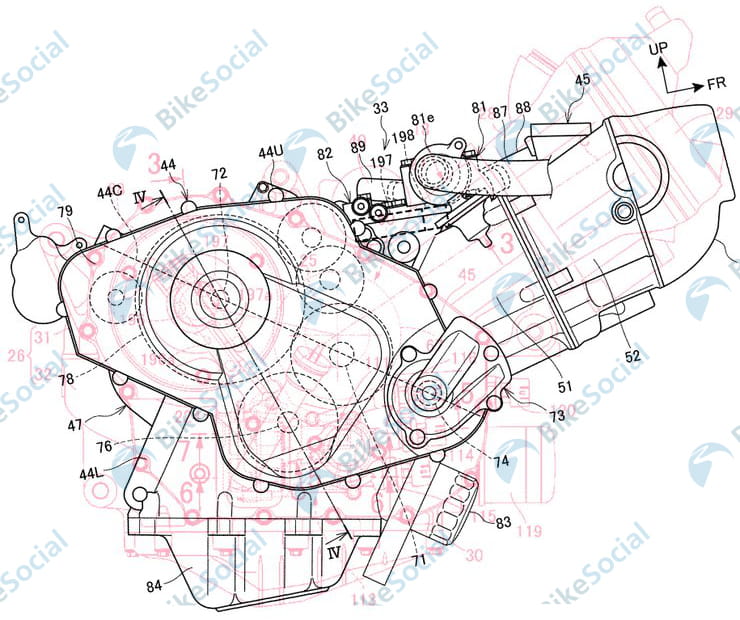 Here we’ve overlaid the new engine design (black) on top of the existing NC750 engine (red). The images are scaled for the same distance between the crank centre and cylinder deck and show how much more compact the new engine is.

To be able to flatten the angle of the cylinders, it’s vital for Honda to make the engine more compact – otherwise the cylinder head would be invading the space needed for the front wheel.

To do that while simultaneously increasing the engine’s capacity is clearly a challenge, but the patent shows that Honda’s solution is to use a technology that’s already applied on several of its other models; the ‘Unicam’ cylinder head.

While the current NC models already use a single overhead camshaft to operate four valves per cylinder, it’s a conventional layout with the camshaft in the centre of the cylinder head acting on rockers that pivot on a shaft mounted just above it. It’s a simple system, but not a very compact one.

Honda’s Unicam setup, in contrast, makes for a smaller cylinder head. First used way back in 2002 on the CRF450R motocrosser, it’s since appeared on a variety of bikes including the VFR1200F and the latest Africa Twin. Unicam lets the single camshaft act directly on the intake valves and uses rockers to operate the exhaust valves, making for a much smaller cylinder head. As an added bonus it allows a narrower angle between the valves, which in turn means the combustion chamber can be flatter for a higher compression ratio. 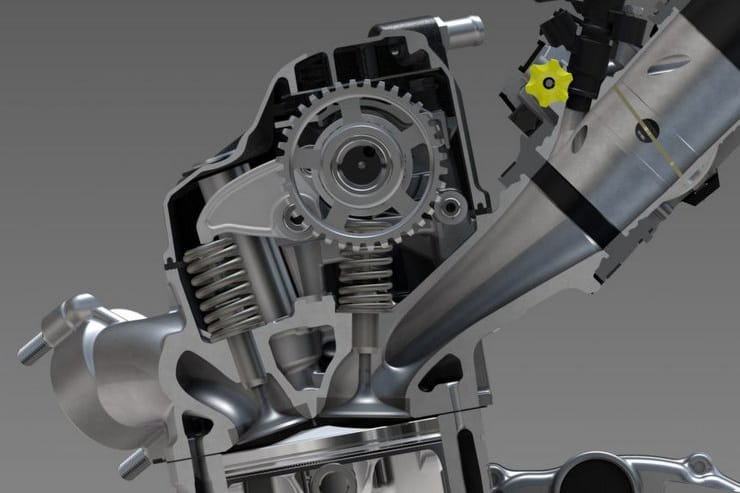 Honda’s Unicam setup – seen here in a CRF450R engine – is clearly being used in the new design.

Although the pictures in Honda’s new patent document show the engine in a current NC frame, it’s clearly not intended for that chassis. The mounts on the new engine design don’t line up with those on the existing frame, and it doesn’t have provision for the lower front mounting bracket at all.

The Unicam cylinder head makes it significantly shorter than the existing NC engine, so even when tilted several degrees further forward it doesn’t invade more into the space needed for the front wheel and radiator. Its transmission is also shorter, which means it should be possible to mount the engine further back.

The DCT gearbox remains, with two clutches and a split input shaft. With 1st, 3rd and 5th gears on one half of the shaft, using the first clutch, and 2nd, 4th and 6th on the other half and controlled by clutch number two, two gears can be engaged at any one time. By simply disengaging one clutch and engaging the other, the gear is changed without any loss in drive.

On the new engine, the actuators that control the gearchange are moved, so instead of sitting beside the engine, adding to its width, they’re on top of the cylinders, just below the intake tracts. 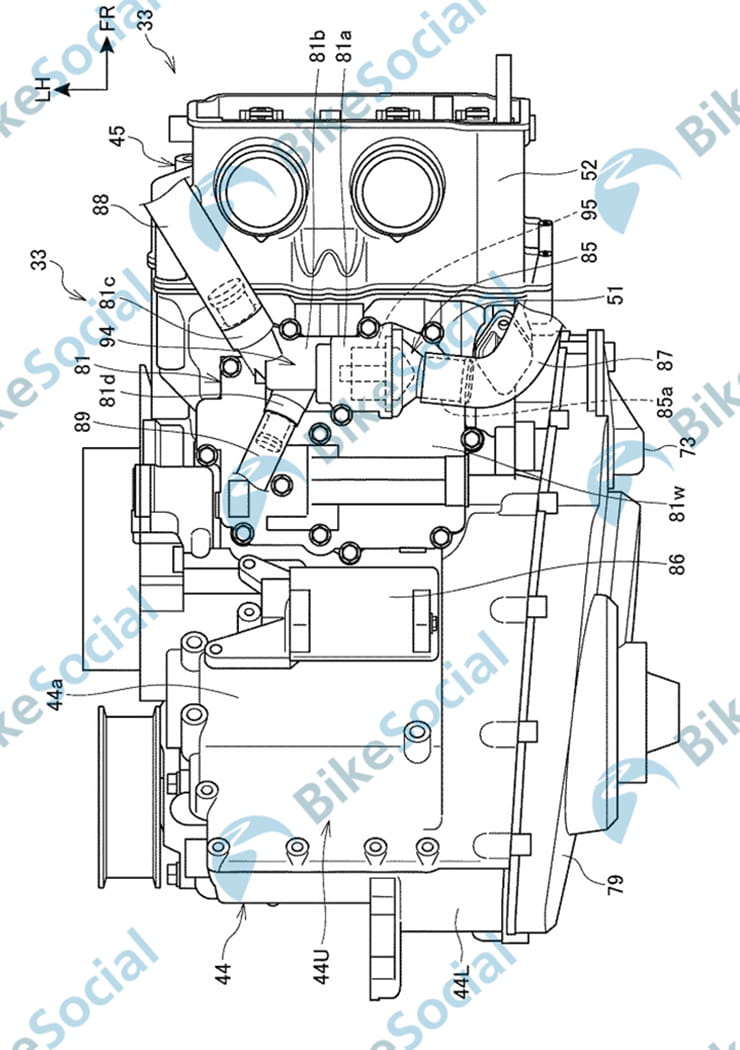 The DCT actuator unit is built into the top of the engine (numbered 81 in this image) rather than on the side, making for a narrower package overall.

If, as it appears, this is the next-generation NC engine, it’s likely to appear first in a naked ‘S’ model and an adventure style bike to replace the NC750X, both with a capacity of around 850cc. However, it’s not clear how that will mesh with rumours that Honda is planning a new, smaller ‘Africa Twin’.

Given that the small Africa Twin rumours – which have yet to be confirmed – also suggest a parallel twin engine of around 850cc, tuned for torque rather than power, it surely makes sense that the ‘baby Africa Twin’ and the likely ‘NC850X’ will be one and the same.

With the NC range updates expected for 2021 to coincide with the introduction of Euro 5 emissions rules, we should find out much more about Honda’s plans for the bikes later this year.