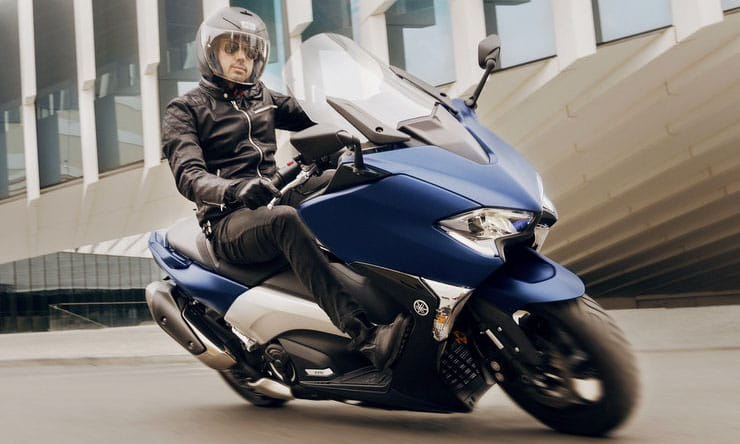 Yamaha’s TMax is the machine that created the ‘big scooter’ class when it first appeared nearly 20 years ago in July 2000. Now it’s on the verge of getting bigger still as we can reveal that it’s getting a revised 562cc engine for 2020.

The new bike, which will go under the name XP560 TMax, is still a closely-guarded secret at the moment but BikeSocial has seen documents that reveal its existence and key technical specs.

As with the current model (pictured above), the 2020 TMax will come in two versions, a base model and a higher-spec ‘DX’ version aimed at improved comfort and long-distance ability. The chassis and much of the bodywork seems unlikely to change significantly; next year’s larger-capacity TMax has the same 1575mm wheelbase as the current model, as well as sharing an the same 765mm width, 2200mm length and identical heights – adjustable from 1420mm to 1475mm on the base model and rising to a maximum of 1555mm on the taller-screened DX version.

That means the focus is all on the engine. The new version, which meets Euro 5 emissions limits, marks the second capacity increase since the TMax’s introduction in 2000. The original model, from 2000-2011, used a 499cc parallel twin, with a 66mm bore and 73mm stroke. In 2012 the capacity rose to 530cc thanks to a 68mm bore and the same 73mm stroke. Now the total rises again, this time to 562cc.

Once again, a bore increase is the most likely route to the increase. By upping the cylinder bore from 68mm to 70mm and keeping the same 73mm stroke that’s been used since the very first TMax, you hit the 562cc total that Yamaha has chosen. In fact, there are already aftermarket big-bore kits that offer precisely that change.

In terms of performance, the extra 32cc doesn’t add a vast amount. Next year’s bike has a peak of 47hp (35kW) at 7500rpm, compared to 45.3hp (33.8kW) at 6750rpm from the 2019 model. That’s partly because the Euro 5 emissions limits will inevitably limit the increase but more importantly because if Yamaha gave the bike more than 47hp it would no longer be able to be used with an A2 licence in Europe.

While the power increase is small, it’s enough to increase top speed from 100mph on the current model to 103mph. That’s on a scooter, remember.

The new emissions rules mean there will be changes to the exhaust, probably with a larger catalytic converter or additional cats to help clean up the bike’s act. That’s probably why the 2020 model will be heavier than today’s TMax. The base version is going to come in at 218kg ready-to-ride, up from 213kg, and the DX model is going to rise from 216kg to 220kg in 2020.

The official announcement of the new TMax can’t be far off now, so expect to see real photos and full specs within the next few weeks.