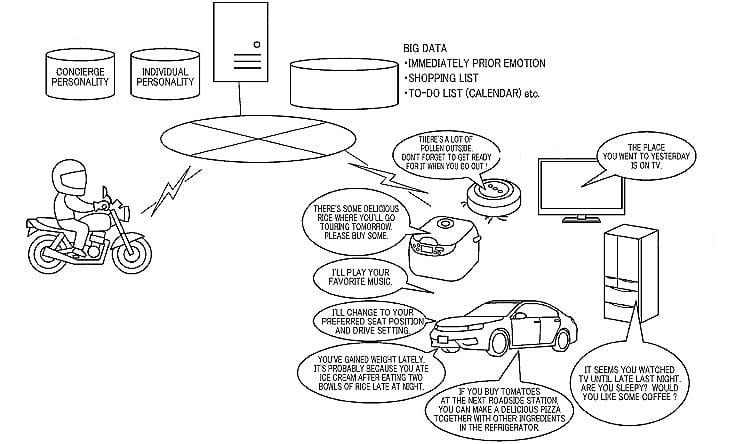 The idea of the ‘connected’ home is already well established. We’re increasingly using internet connected devices – lights, thermostats, doorbells, home assistants – and it’s only a matter of time before your bike gets in on the action.

While it might seem like a distant future, Honda is already brainstorming how this connectedness could impact motorcycling and filed patent documents showing how devices in your home might one day tell your bike about your emotional state. The idea is to intervene if you’re a risk to yourself; potentially limiting the bike’s performance if, for instance, your fridge decides that you’re angry enough to have impaired judgement.

According to Honda’s patent application – titled ‘Emotion inference device and emotion inference system’ – the idea is that the motorcycle of the future will have a built-in computer personality. Described as a ‘concierge personality’, it seems that Honda is talking about something rather like Iron Man’s ‘Jarvis’ computer butler. The document says “A motorcycle includes an individual personality that is configured on the basis of information on a user from a plurality of products associated with the user, connected to a communication network…”

It goes on to explain that the network might include a car, a TV, a vacuum cleaner, a refrigerator and even a rice cooker (it’s a Japanese patent, after all.) The idea of connected kit helping day to day life isn’t a new one. We’ve long heard about fridges that will remind you when you’re short of milk or give out handy recipes based on what’s inside them at any particular time, but the idea of trying to assess your emotional state is another step.

While it’s a little hard to see how a fridge or TV will be able to judge whether you’re happy or sad, chilled out or furious, it’s easy enough to understand that a car (or bike) could interpret aggressive use of controls as ‘anger’. Similarly, a voice-operated assistant (think Amazon Alexa, Google Assistant or Apple’s Siri) might be able to judge your mood in future from your voice.

According to Honda’s patent application, all these connected devices could build a picture of your normal behaviour and be able to assess emotion from slight deviations from the norm. 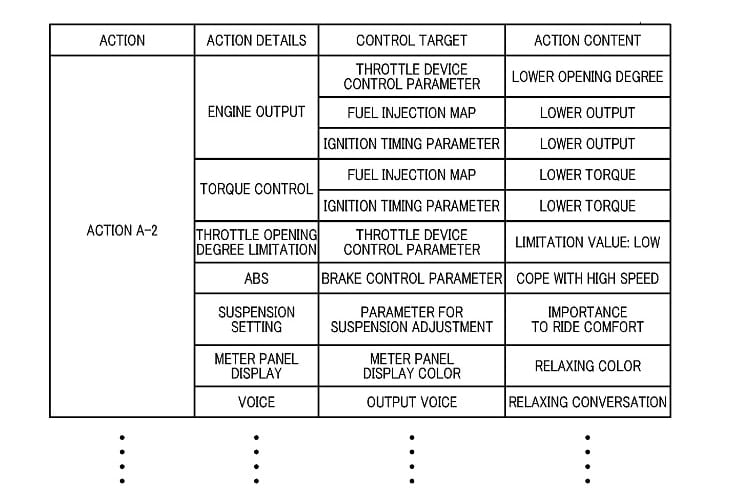 The chart above shows how the bike-based system would respond if it judges you’re angry. The patent says “action A-2” is “to quiet down the emotion in a case where the emotion of the user is ‘anger’. If it’s sensed, the bike would reduce the throttle openings and change injection and timing maps to cut power and torque while simultaneously tweaking ABS and suspension settings. It even suggests that the dash could be reset to a ‘relaxing’ colour and that the on-board assistant’s voice would be made more calming.

Other emotions mentioned in the patent and intended to be addressed by their own settings on the bike include ‘sadness’, ‘tiredness’, ‘pleasure’ and ‘insignificance’.

Given the speculative nature of the patent application, we’re not expecting Honda to launch a range of semi-sentient, talking motorcycles that are able to judge your emotional state any time in the next few years, but it’s fascinating to see that the firm’s R&D department is already expending time and resources on addressing this sort of future tech.