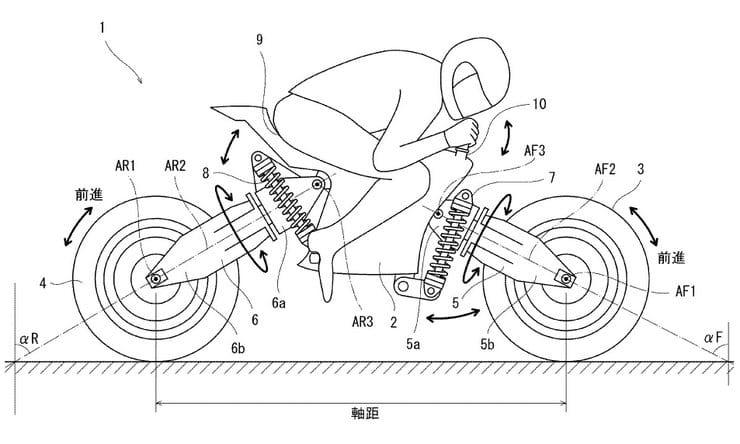 The vast majority of motorcycle R&D is involved with making incremental improvements on existing technology but once in a while manufacturers let their designers off the leash – and then things like this happen.

This is a new patent application from Kawasaki, showing a motorcycle that might have a two-wheeled layout and forward-hunched riding position but dispenses with virtually everything else that we’re familiar with. There are no moveable handlebars, for instance. Instead the rider holds a fixed hoop that he can use to muscle himself from one side of the bike to the other. Steering is achieved not by turning the front wheel conventionally but by shifting your weight from side to side. Sensors on the bike register the weight distribution and activate electric motors that can pivot the front and rear wheels and their swingarms on an axis running in the direction of the swingarm. It sounds complicated, and it is, but the picture below shows how the wheels move in relation to the bike during corners. Basically, the front wheel banks much further than the lean angle of the bike itself, while the rear wheel is pivoted the other way so it remains more upright than the bike’s body. In theory, that will turn the bike. 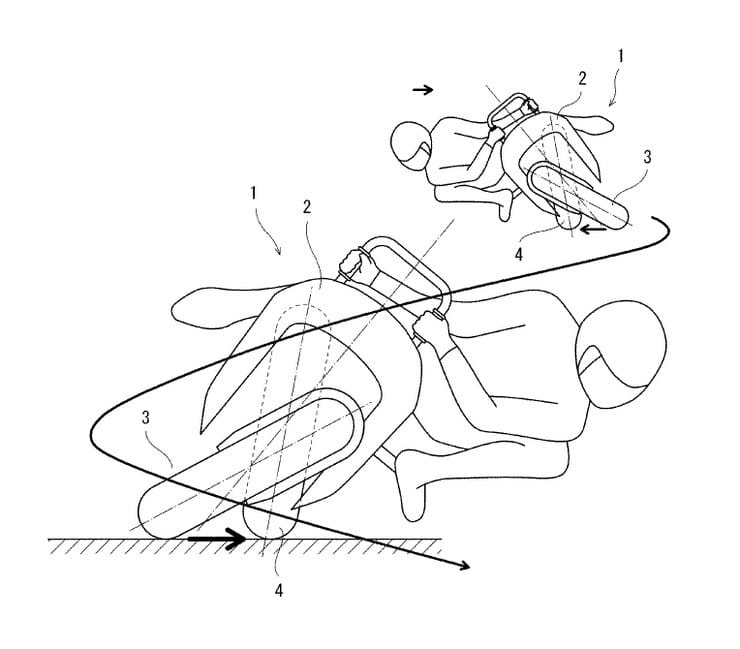 The wheels bank independently from the bike itself, taking on weird angles as it goes through corners.

Clearly, using wheels that adopt different lean angles from that of the main section of the bike poses a problem when it comes to driving them. A chain or belt would jump straight off its sprockets, so Kawasaki’s solution is to use in-wheel electric motors powered by a battery sited in the main section of the bike. Both the front and rear wheels contain motors, making this a two-wheel-drive machine, and the same main battery also powers the servos that operate the wheel tilting mechanism.

As seen below, Kawasaki might have ditched moveable handlebars but it still envisages a conventional throttle twistgrip and finger-operated brake lever (illustrated below). However, the image above, showing the bike cornering left and right, also depicts a problem with that idea – the rider’s throttle hand rotates around the bar as he hangs off in different directions. Let’s hope that gets addressed before the project goes much further. The patent also describes a second version of the system with throttle twist-grips on both the left and right bars, where the average position of both is used to judge how much throttle the rider actually wants. Seems a bit over-complicated… 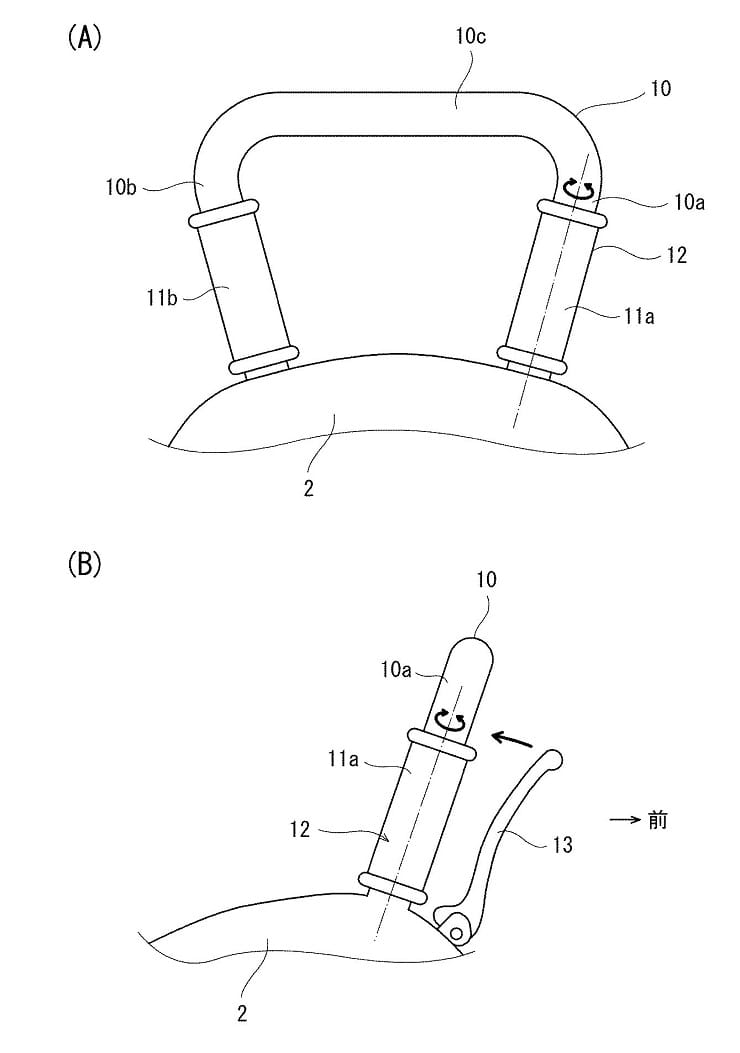 The bars don’t move, but at least the throttle and brake controls are familiar

Of course, Kawasaki isn’t about to release a production bike that’s anything like this but it’s intriguing nonetheless to see how the firm’s R&D engineers are thinking. With the Tokyo Motor Show coming up next month – traditionally a place to show off the madder concepts in motorcycling – it’s possible we could even see something based on this patent as a concept bike sooner rather than later. Back in 2013, Kawasaki used the Tokyo Motor Show to reveal the ‘Concept J’ – a leaning, shape-shifting four-wheeled superbike that also played with control ideas that were quite different to the ones we’ve got used to over the last century or so.

The tilting wheel system is clearly the main source of interest here, but interestingly it’s not actually as innovative as it might seem at first. Honda patented several designs with similar thinking back in the 80s and 90s. Those never saw the light of day. Will this one? We’ll just have to wait and see.