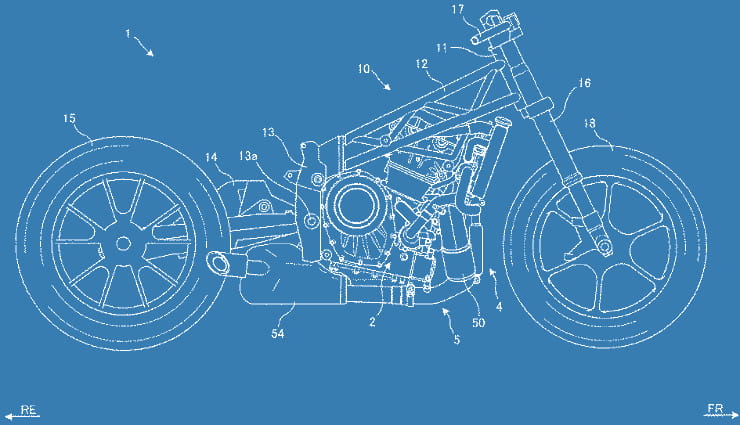 The saga of Suzuki’s planned turbocharged twin-cylinder sports bike has been rumbling on for years but after a long silence there are new signs of activity that suggest the bike is slowly getting closer to production form.

To recap, the idea kicked off way back in October 2013 when Suzuki surprised everyone with its Recursion concept bike. Powered by a 588cc SOHC parallel twin engine bolstered by a turbocharged, the intention was to create a fuel-efficient, lightweight bike with around 100hp and a vast reserve of turbocharged torque. Reaction to the concept was so positive that Suzuki immediately pushed ahead in developing the idea towards production.

Two years later, at the 2015 Toyko Motor Show, Suzuki unveiled the XE7 engine – a real-world successor to the Recursion’s twin. The SOHC layout was gone, replaced with a higher-spec DOHC design, and while Suzuki never confirmed the XE7’s capacity, the engine’s name appeared to confirm rumours that it was bumped up to around 700cc.

Since 2015 Suzuki has officially stayed quiet about the project but a steady flow of patent applications from the firm’s R&D department has kept us up to speed with developments as the turbo bike edges towards production. 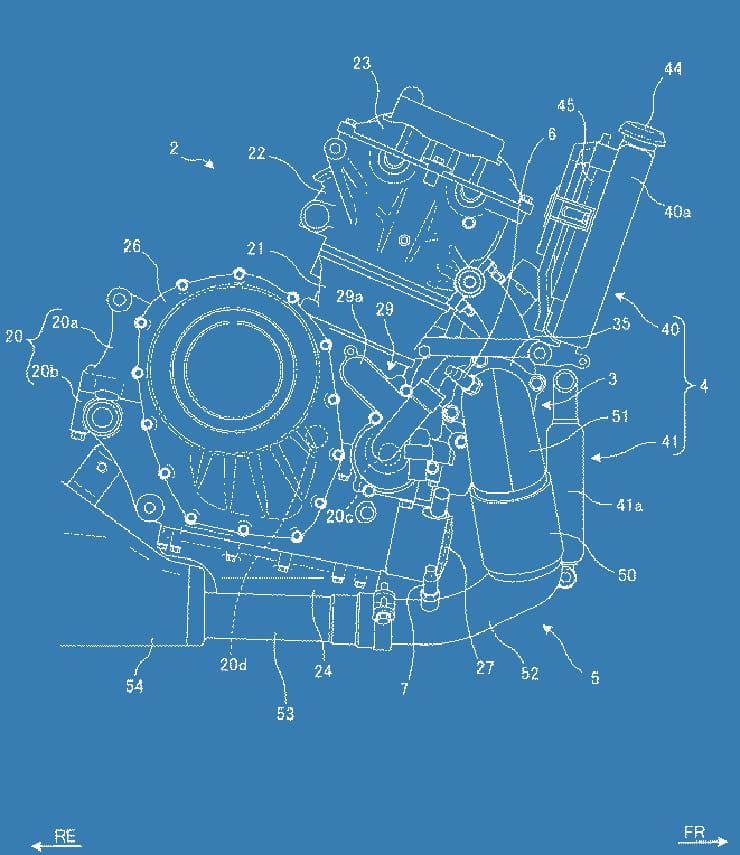 During 2019 the flow of new patents related to the turbo twin – which has sometimes been referred to as the GSX700T – has slowed to a dribble and Suzuki failed to bring any evidence of the bike to either the 2017 or 2019 Tokyo Motor Shows.

However it seems the project hasn’t been cancelled as a new patent application, just published in Japan, shows that the team is now working on making the bike meet emissions requirements.

The patent is specifically about the way the bike’s catalytic converter is arranged without harming the bike’s aesthetics or its cooling performance – both new challenges given the heat and packaging problems that a turbocharger throws up.

You can see in the image above that the cat, numbered ‘50’, is positioned as near the turbocharger as possible, and the turbo itself is mounted very close to the exhaust outlets on the cylinder head. The idea is to get the turbo spinning with minimal lag and to transfer heat as fast as possible into the catalytic converter to bring it to operating temperature.

Compared to earlier images, XE7 engine itself has been refined with more intricate casting for the covers on the right hand side, with what appear to be stiffening ridges on the clutch cover. The exhaust silencer is mounted under the rear section of the motor, and as can be seen in the full side-on picture (top) the exhaust exits just ahead of the rear wheel, which itself retains the single-sided swingarm that was seen on the Recursion concept. 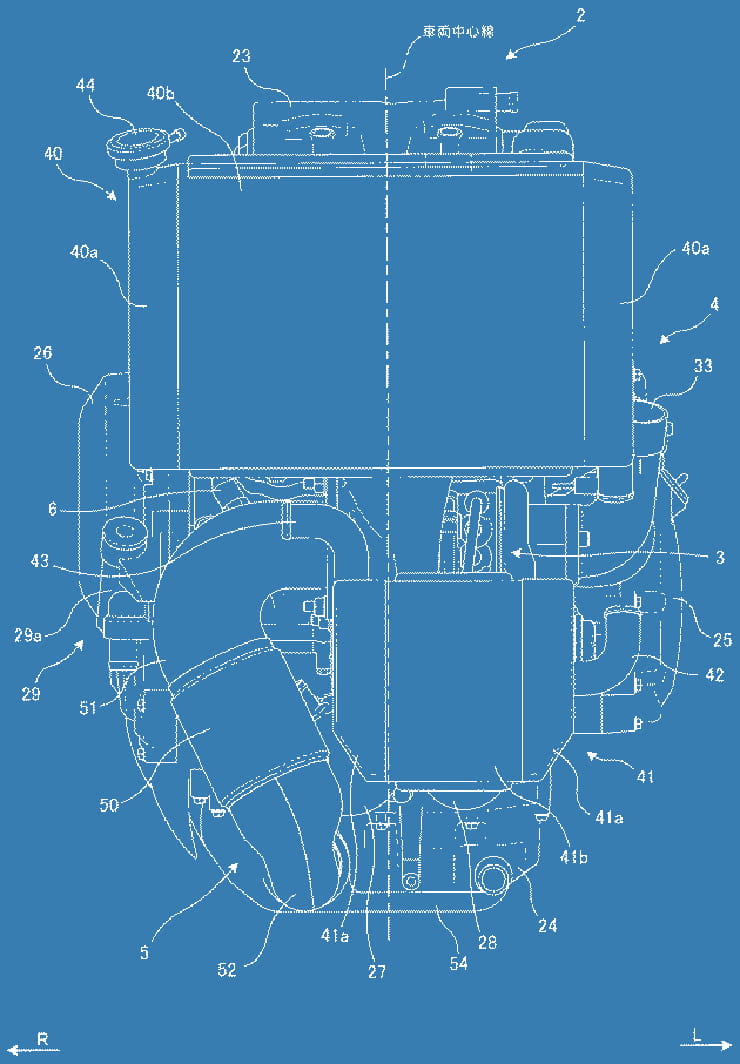 From the front, you can clearly see the turbocharger (labelled ‘3’) peaking between an upper and lower radiator, with a large, L-shaped exhaust outlet tube (51) redirecting the gasses downward into the catalytic converter (50).

While earlier designs also used the double-radiator layout, which allows cooling air to pass between the top and bottom radiators and directly cool the turbocharger, they all featured a full-width lower radiator, leaving no space for the cat. Now Suzuki has halved the width of the lower rad, letting the converter sit next to it. 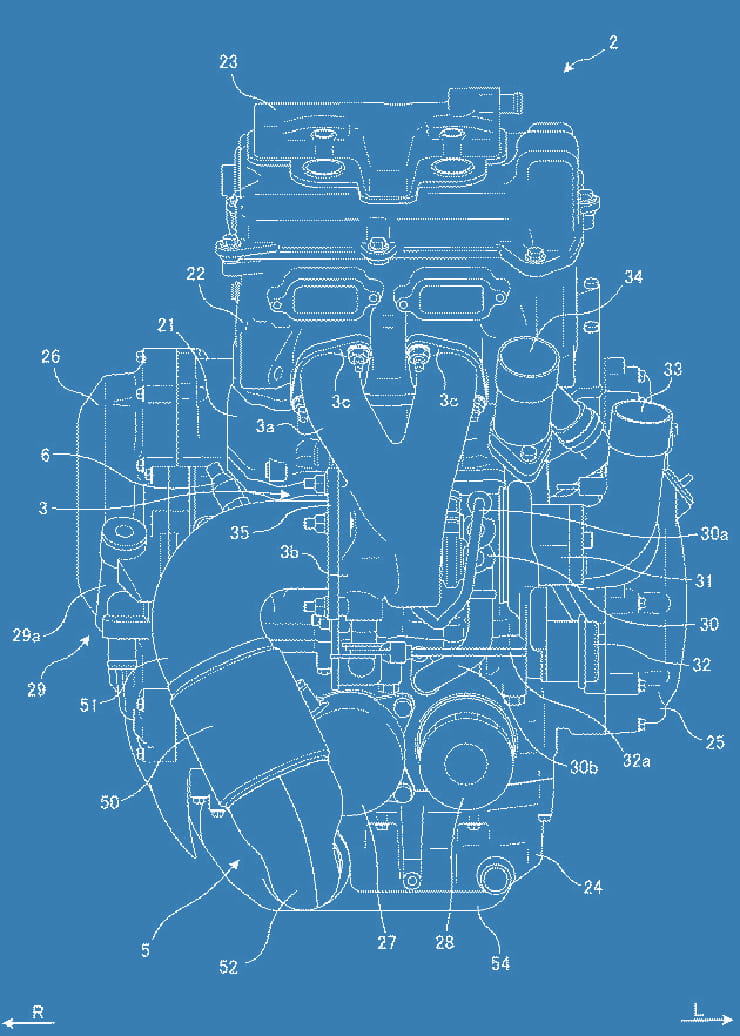 Stripping away the two radiators, we get a clearer view of the front of the engine, again showing the turbo and the catalyst but also the intake pipe (33) which will be attached to the air filter, and the high-pressure air pipe (34) that will route the air up into an intercooler mounted above the engine before it goes into the throttle bodies.

At the bottom there’s a water-cooled oil cooler (27) next to a conventional oil filter (28). The overall impression is of a very complete, production-ready engine – but that was already apparent four years ago when the XE7 motor was shown.

If nothing else, the slow progress of the design gives a clear insight into the painfully protracted business of taking a completely new motorcycle from inception to production.

It’s worth remembering that Suzuki has been in this position before. Way back in 2001 the firm showed the B-King concept bike, originally featuring a supercharged version of the Hayabusa engine. It was hugely popular and the reaction to the bike led to the project getting the green light for production. Despite being based on an existing production engine and ditching the supercharger, it still took six years for the concept to turn into a production bike, which was widely considered too watered-down compared to the concept and thus wasn’t a big sales success.

In comparison, the turbo twin project is a much more complicated one, involving a completely new engine as well the bike it’s bolted to and throwing another spanner in the works by adding relatively unknown turbo technology into the mix. Suzuki will be desperate not to mess this one up, so we need to be patient. Hopefully the finished bike will make the wait worthwhile.