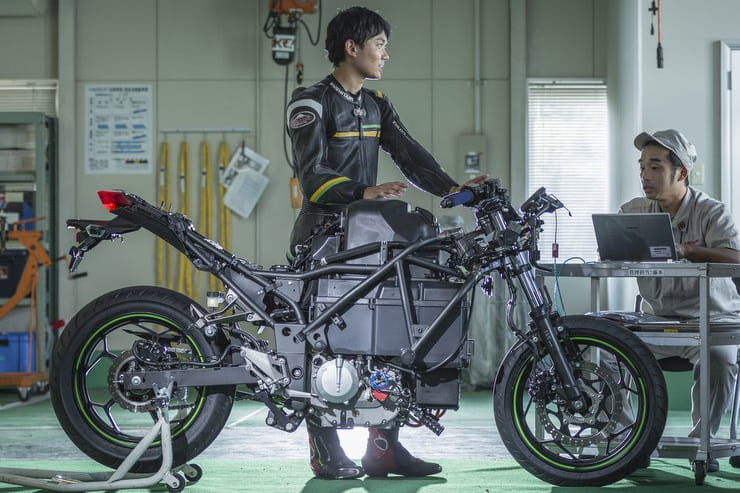 Kawasaki says it has ‘no plans’ for an electric production bike in the near future despite showing a Ninja-based prototype at last week’s EICMA show in Milan.

In an announcement about the bike, the firm said “KHI has stated there are no plans to add an EV bike to its range in the near future”. Instead the firm points to a statement by KHI Motorcycle and Engine Company president, Yuki Horiuchi, that the project is simply part of an effort to find “more avenues to explore to expand the excitement of control on two wheels.”

The electric bike displayed at EICMA was something of an enigma from the start, not least because it’s patently a very old machine. ‘Patently’ is an apt word, since in this case a patent for an identical electric bike – the same down to every last nut and bolt on its ancient Ninja 300-based bodywork, suspension and wheels – was filed in Japan back in 2012. Kawasaki itself said that it has been researching EV bikes for many years.

In terms of specs, the Kawasaki electric prototype isn’t going to have Zero quaking in its battery-powered boots. Its peak power of just under 27hp is only available for short bursts, with a continuous maximum of just half that – 13.4hp. Range, the other big deal breaker on many electric bikes, is a pretty sorry 62 miles, and the whole caboodle weighs 219kg.

If we take the Zero SR/F as the current state of the art for mass-produced electric bikes on the market right now, its figures of 110hp, a 123 mile average range and a weight of 220kg make the Kawasaki prototype look, well, like something from 2012…

Sure, the Kawasaki prototype does add a conventional gearbox into the mix, albeit just a four-speed, but again that’s been done before. Brammo was at it years ago, before being swallowed by Victory and eventually closed down entirely along with its parent brand, and Kymco’s  RevoNEX electric bike also uses a gearbox. Unlike the Kawasaki, though, the Kymco will be on sale in 2021 with performance figures that match or beat the Zero SR/F.

So far from providing answers, Kawasaki’s decision to show its electric bike at EICMA poses new questions. What is the firm learning from a prototype that appears to be so far behind the curve? It looks like the project hasn’t evolved at all since its designs were patented a nearly a decade ago – a time when iPhones were still new and exciting and Tesla was just launching its game-changing Model S electric car. And if it really isn’t interested in making an electric production bike, why show the prototype at all?

Perhaps this is sleight of hand on Kawasaki’s part, waving something outdated in front of our eyes to draw attention away from a much more advanced electric bike project elsewhere, but the statement that there’s no electric production bike coming any time soon appears to counter that idea.