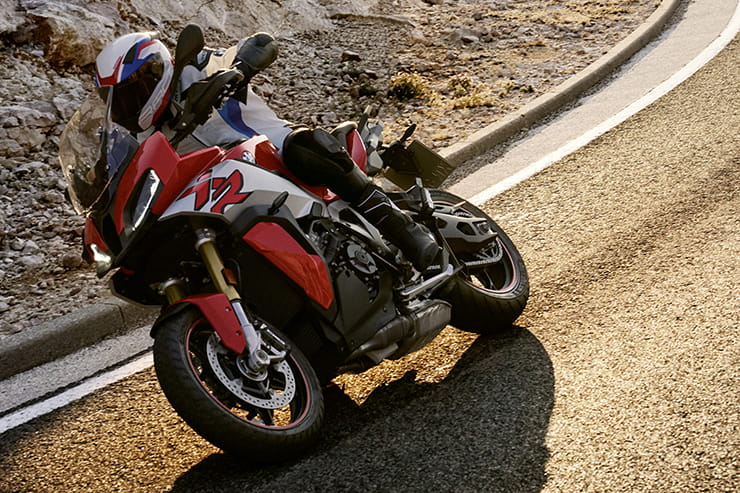 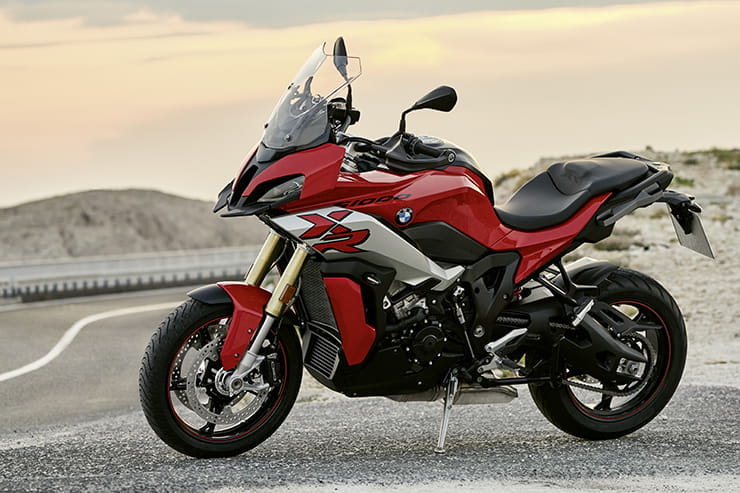 Owners of BMW’s popular S1000 XR are no doubt wondering if their current bikes are now out-dated. Described by BMW as being ‘lighter, faster and more versatile’, the new adventure sport bike – which we will review before its release in 2020 – has a few features that might make existing owners look at their PCP deals…

First things first; the new S1000XR doesn't have the shift-cam motor we expected. But there are plenty of other changes...

Weighing 226kg full of fuel and ready to ride, it’s two kilograms lighter than the current model, which has been pretty much unchanged since its launch in 2015. BMW’s headline figure of a 10kg weight saving is due to the new machine having integrated luggage rails that look very similar to those on the Kawasaki Versys 1000. With the luggage rails that the existing XR requires for boxes in place, the total saving will be of most interest to those who tour on this bike, which outsold the S1000 RR in the UK by almost 25% since going on sale.

The maximum total weight is 450kg, which is up from 444kg, so the load capacity is even greater. Of course, current owners of BMW’s luggage will need to change it for the new bike. 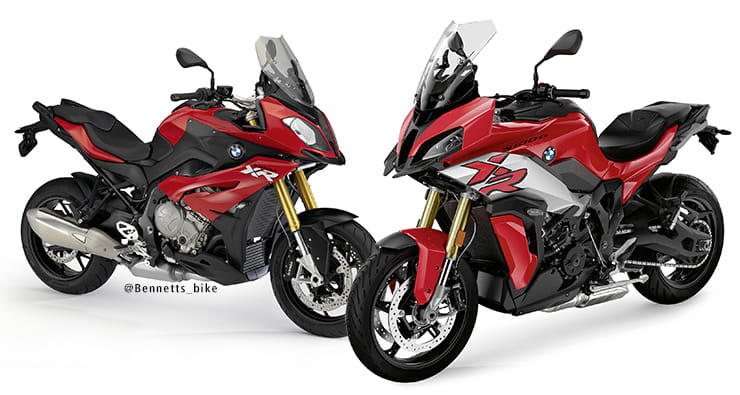 While the previous model was available in various iterations that saw the top-spec electronics only available on the highest-price machines, the 2020 S1000 XR includes the following:

The new model also gains Hill Start Control Pro, MSR (engine drag torque control to prevent the rear wheel slipping in under aggressive acceleration or down-changes) in addition to the existing anti-hopping clutch, a 6.6” TFT display with full connectivity (instead of the rev counter dial and LCD on the outgoing model) and full LED lighting.

The riding modes gain a ‘DTC Wheelie Function’, which uses the six-axis sensor to allow for controlled front wheel activity, while the superb up-and-down quick-shifter is now standard, with a 20N lighter action to the gear selector (now 65N). 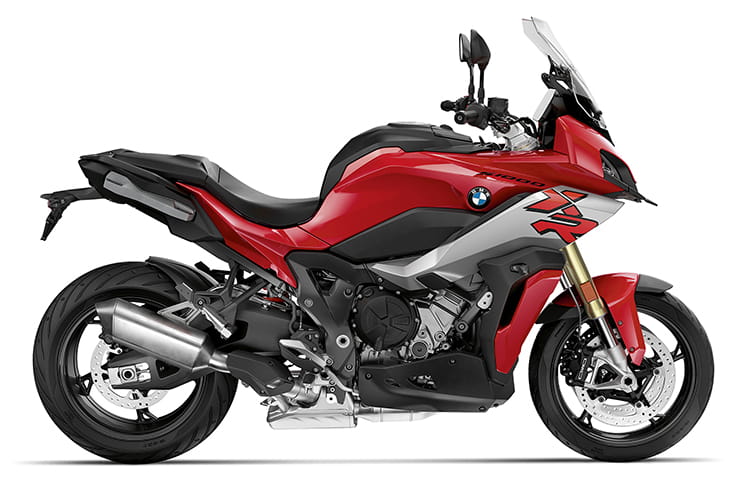 Does the new BMW S1000 XR still vibrate and buzz through the bars?

One of the most common criticisms of the existing machine is a vibration through the bars somewhere around 5,000rpm. While we’ll need to test-ride the bike to find out if it’s been eliminated, we do know that the new motor is described as being ‘completely newly developed’.

“The challenge with the S1000 XR was to create a power unit derived from the S1000 RR's supersports engine that was going to be much more suitable for touring than its predecessor, though without compromising its dynamic characteristics and performance,” said Thomas Ziemendorf, Project Manager Motorcycle Drive.

Compression has been increased from 12.0 to 12.5, while the linear torque curve and altered gear ratios of the new machine are said to ‘further make the engine speed range somewhat broader, more fulsome and more harmonious with a view to enhanced rideability.’ Bascially, 4th, 5th and 6th gears are all slightly longer, meaning engine speed is lowered by up to 8%. This could well move the engine vibes to a less intrusive rev range.

The new bike’s bars are 30mm narrower than before, and the ‘vibration decoupling’ has been redesigned, now using pressed-in rubber bushings. While BMW did fit rubber dampers to the bar risers of the old model, and Evotech Performance offers much heavier bar ends – a combination of which significantly reduced the vibration – we’ll have to wait until the full review to find out what it actually feels like.

Fuel consumption has been reduced by 8% to 45.6mpg, and while BMW claims that the redesigned motor has ‘optimised mid-range power’, it goes on to say in its press release that the new bike offers ‘that bit more power at low and mid-range engine speeds’, which is most likely down to the redefined gear ratios, though the cam profiles have been modified.

Thanks to 25% lighter rocker arms, removal of an idler gear between the crank and camshafts, a combined oil and water pump and other modifications, the engine is now 5kg lighter than before.

Does it still sound great?

We’re going to have to wait and see, but BMW does say that the newly-designed exhaust system (still made of stainless steel) has ‘reduced noise levels for comfort-oriented travel and constant riding’. It’s about 10% (1.2kg) lighter than the previous model too. 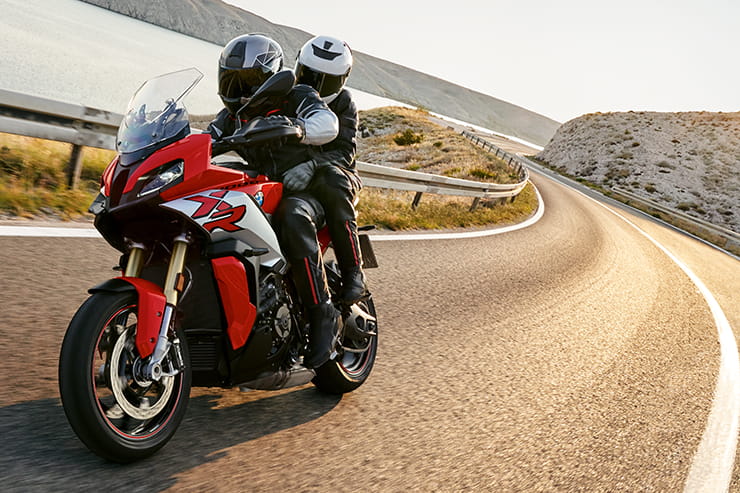 Any other differences between the new and old BMW S1000R XR?

The engine is said to be more of a load-bearing element of the main frame, which sees a 2% reduction in weight. The subframe also loses 9% of its weight.

The steering head angle has gone from 64.5° to 65.1°, with offset altered and castor reduced by 1mm to 116mm. The wheelbase has gone from 1,548mm to 1,552mm. BMW says that the new bike will offer improved feedback from the front wheel and better control at the rear, while also being more directionally accurate.

At 66.6kg, the new swingarm is 20% lighter than it was, and the linkage to the shock has been removed. Rear wheel travel now matches the front at 150mm (the old bike had 140mm at the rear).

Dynamic ESA Pro is an ex-works option and expands on the manual load settings of the Road mode with the addition of automatic load compensation and a ‘minimum’ setting for the spring pre-load, which can make picking the bike up off the side stand in pillion mode easier. Seat height remains at 840mm for 2020, but the bike can be effectively lowered when it’s at a standstill. Pro mode can be retro-fitted by BMW Motorrad dealers, and the damper valves have been redesigned with new shim stacks for a claimed improvement in comfort.

The new wheels weigh a total of 1.8kg less than before (that’s a reduction of 17%), and even lighter ‘M’ forged wheels are an option. BMW claims weight savings across pretty much the whole bike, so we’re waiting to find out how so many reduction only see 2kg shaved off the bike – the new integrated luggage system must make up a fair chunk.

The front brakes are still four-piston calipers biting 320mm discs, but they’re BMW-branded (likely Hayes), as opposed to the Brembos of before.

Dynamic Brake Control (DBC) has also been introduced, which limits unintentional acceleration during braking, to keep stopping distances as short as possible. That probably also means an end to the burn-outs.

The new 6.5” full-colour TFT dash can be set to various styles and includes the following information: 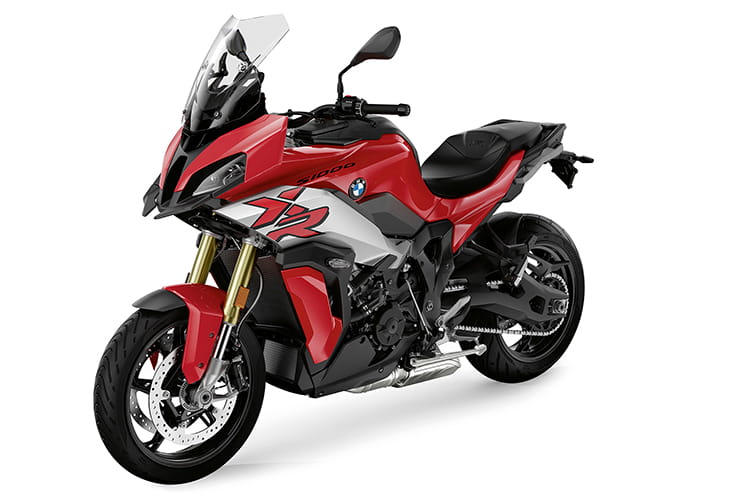