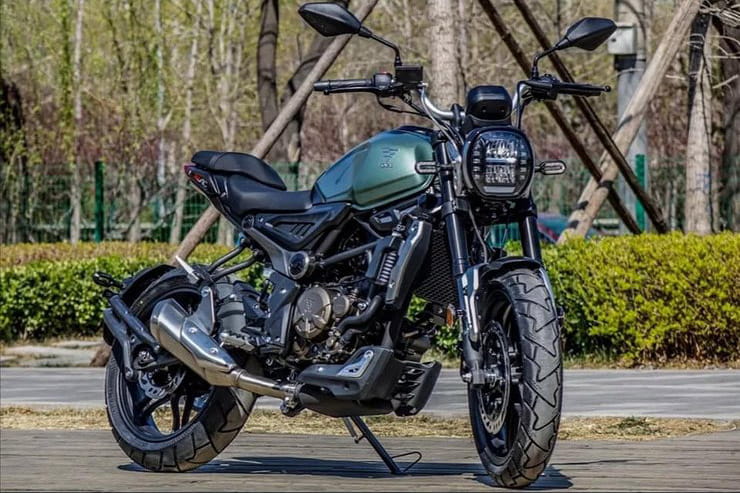 Chances are that you’ve never heard of Voge, but this newly-minted Chinese bike brand aims to demolish preconceptions of poor quality and intends to eventually expand to have a full international presence.

The firm was announced late last year as a subsidiary of enormous Chinese bike manufacturer Loncin, and now it’s unveiled a full range of machines including sports bikes, adventure tourers, retros, singles, twins and even an electric offering. Initially on sale in China, Voge has already revealed plans to put its bikes on sale in South America.

The bikes themselves aren’t all entirely new. Some have previously appeared under the Loncin name in China, but with the Voge sub-brand the company is ushering in a new level of technology and quality, using well-known suppliers for components including Nissin brakes, KYB forks and Bosch ABS systems to make them into more convincing alternatives to established Japanese or European brands. There’s no word yet on when we might see the bikes in Europe, but we’re interested to see if they make it here.

Here’s the range so far: 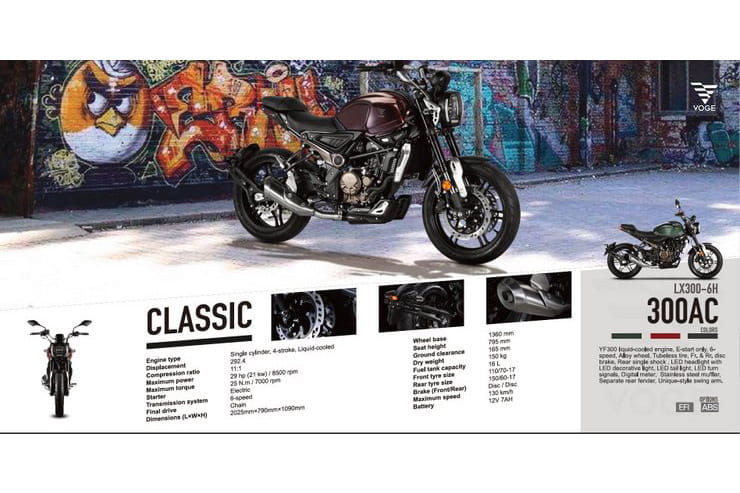 This neo-retro machine is the Voge 300AC. It’s got a 292cc Loncin single-cylinder engine making a claimed 29hp mated to a 6-speed transmission, optional ABS and full LED lighting. It promises an 80mph top speed and weighs in at 150kg dry. 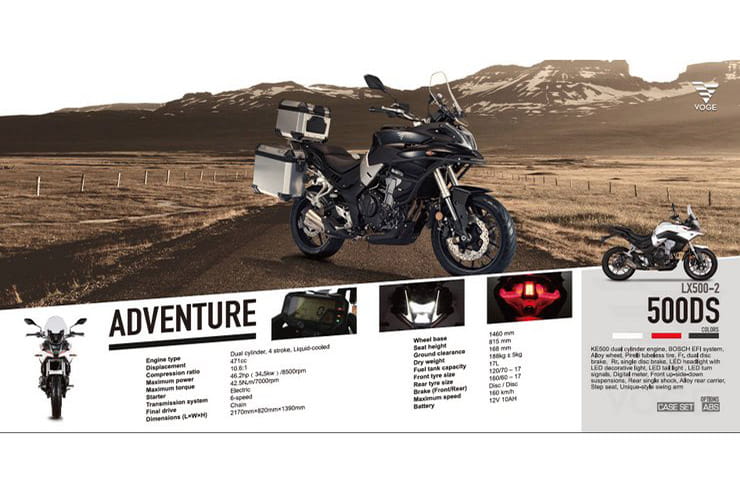 The 500DS, pictured above, is Voge’s dual-sport twin. Its engine is the 471cc Loncin parallel twin that’s being used in an increasing number of Chinese bikes and shares a remarkable similarity to Honda’s CB500 unit. Power is claimed to be 46.2hp, with a weight of 188kg. Bosch supplies the fuel injection and ABS system. As with other Voge models, all the lights are LED and the instruments are fully digital. 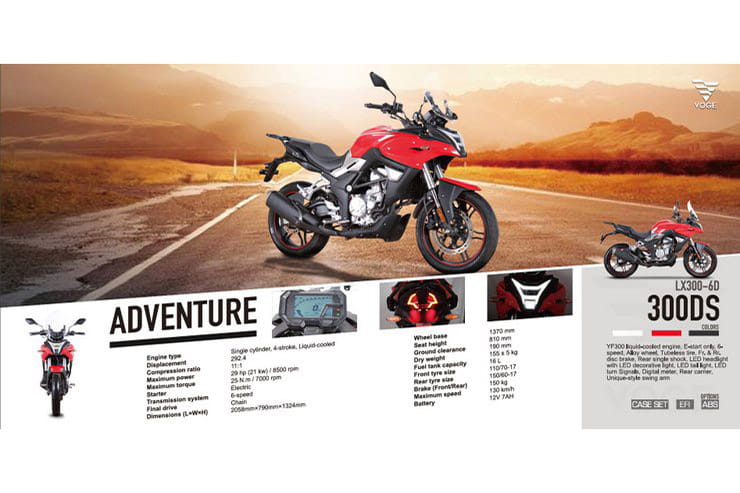 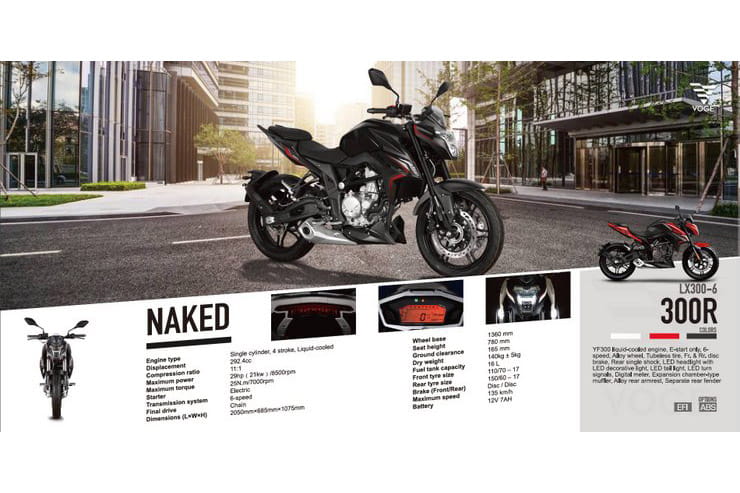 Another model with the same 292cc single is the 300R, pictured above. This is the sportier naked model of the 300-class Voge range, weighing in at 140kg and with 29hp on tap. 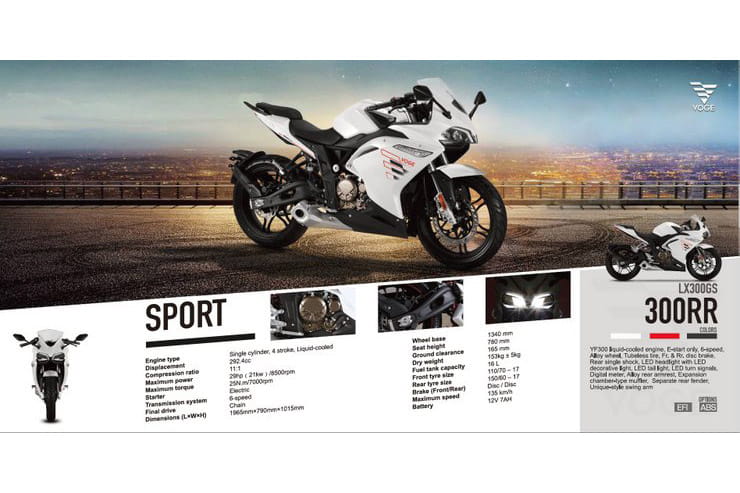 This bike, the Voge 300RR, has already been on sale under the Loncin name in China. Again it’s got the 29hp 292cc single and the same steel tube chassis, but this time wrapped in a full fairing. 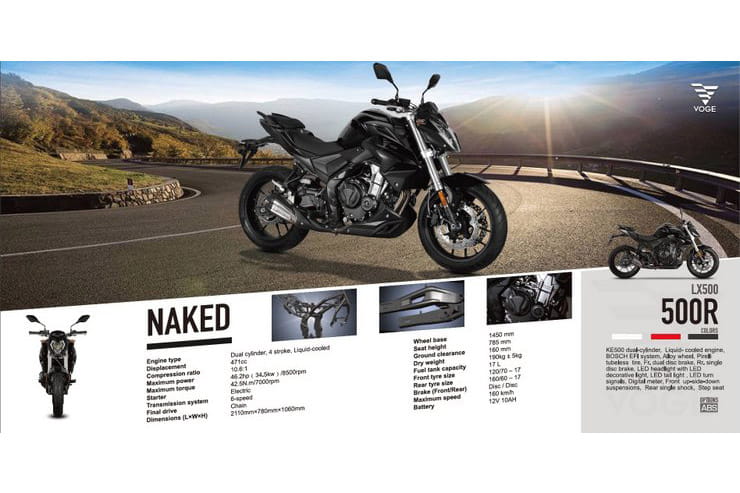 The Voge 500R (above) is one of the higher-spec offerings in the range. It uses the 471cc twin-cylinder engine with 46.2hp, upside-down forks and Bosch ABS. 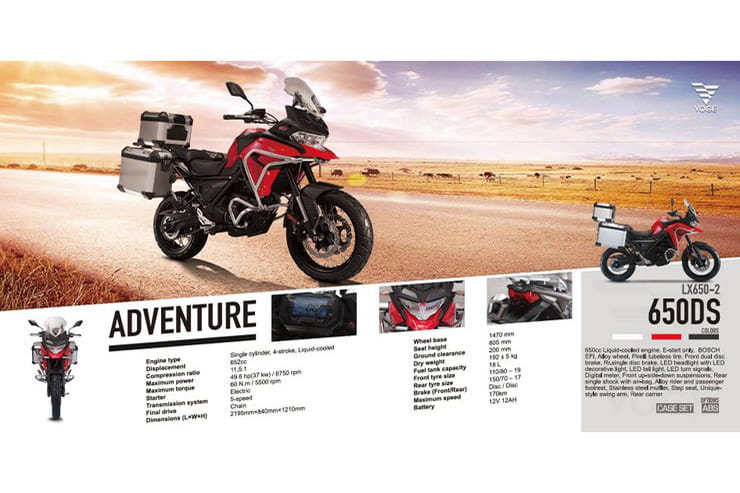 The biggest bike so far under the Voge name is the 650DS, which has previously been seen at shows carrying Loncin branding. The engine here is a 652cc single, making 49.6hp, which will be familiar to anyone who’s previously owned a BMW F650 or G650 model or Husqvarna’s TR650. In fact, Loncin used to manufacture that engine on BMW’s behalf. The 650DS is said to weigh 192kg and features Bosch fuel injection, managing a claimed top speed of 105mph.