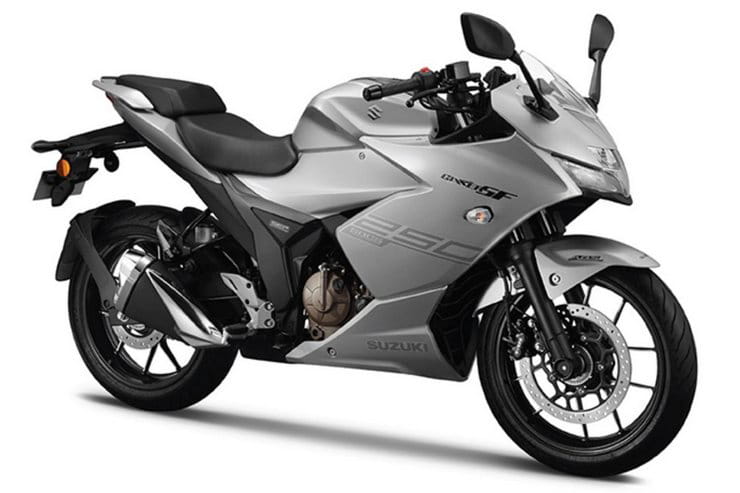 Suzuki has whipped the covers off the sportiest bike that it’s yet designed specifically for the massive Indian motorcycle market and thanks to converging emissions rules it could yet become viable to sell it over here as well.

On paper, the new Gixxer SF 250 – yes, Suzuki has long since adopted the ‘Gixxer’ slang into the official name of a real range of Indian market models – has specs to embarrass the parallel twin GSX250R that we’re offered over here. Despite being one cylinder short and relying on old-school oil cooling rather than a water-cooled motor, the new Gixxer 250 makes a claimed 26.5PS (26.1hp) at 9000rpm, where the GSX250R peaks a fraction lower with 25PS (24.7hp) at 8000rpm. The torque battle goes the other way by a similarly small margin, with the Indian machine offering 22.6Nm (16.7lbft) at 7500rpm compared to 23.4Nm (17.3lbft) at 6500rpm for the Euro-spec GSX250R.

Those numbers might suggest a near-level battle between the two machines, but once weight is brought into the mix, the Indian-market bike races ahead. The new Gixxer, with half the cylinder count and no need to carry a radiator full of water around, weighs in at a mere 161kg ready-to-ride, a full 20kg less than the 181kg GSX250R. That’s going to make a noticeable difference.

In the past this sort of comparison would normally be a moot point; Indian type-approval requirements and emissions limits have traditionally lagged behind Europe’s, making it impossible to sell the models built specifically for that market over here.

But in April 2020, India is adopting its own ‘BS6’ emissions rules that effectively bring it into line with the Euro 5 requirements that are coming into effect over here in January next year. Suzuki’s fuel-injected Gixxer SF 250 is sure to meet those BS6 requirements, and as such it should be no problem to pass Europe’s equivalents. At the moment, it’s far from clear whether the GSX250R will meet Euro 5 without an expensive update, so it may make more sense to consolidate the range worldwide around just one 250cc sports bike; the Gixxer SF 250.

Finally, there’s the ever present question of price. While it’s impossible to draw direct comparisons between UK prices and Indian market ones thanks to costs of shipping, taxes and endless other variables, the new Gixxer SF 250 sells for less than £2000 in its home market, while the GSX250R lists at £4299 here…