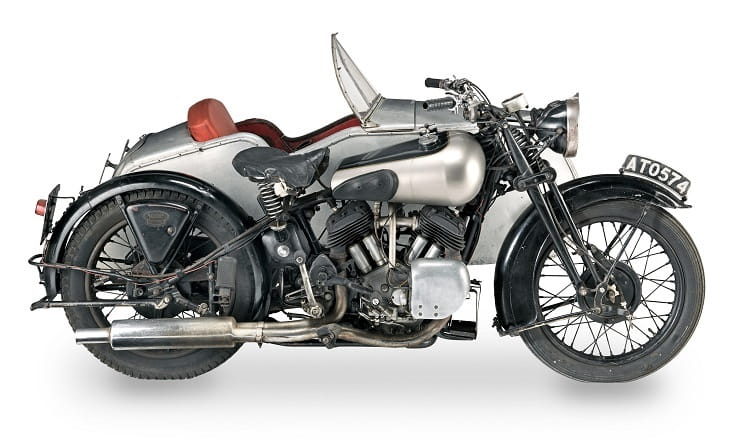 There never seems to be a shortage of Brough Superiors at high-end motorcycle auctions but one of the four examples starring at Bonhams’ Spring Stafford Sale has a particularly varied history.

The 1933 ’11-50hp’ sidecar combination started life as part of Brough’s factory team on the 1934 International Six Days Trial. Ridden by Freddie Stevenson at the event in the Bavarian Alps, it scored a Gold Medal at the event.

Its later life followed the typical fall from grace as it became little more than a used bike, changing hands for as little as £40 in 1965, but rose back to fame in the 1970s when it twice featured in ‘Dad’s Army’.

According to Bonhams’ description of the bike:

It first appeared in this much-loved comedy series in 1971, featuring in the Christmas Special, 'Battle of the Giants' (Episode 40) which was first broadcast on Monday 27th December '71 at 7.00pm. In this famous episode Captain Mainwaring's Walmington-on-Sea Platoon takes part in an initiative test against their old rivals, the Eastgate Platoon. The contest is umpired by Warden Hodges, the Vicar, and the Verger using Hodges' Brough Superior 11-50.

'ATO 574' made its second 'Dad's Army' appearance the following year in Episode 52 - 'Round and Round Went the Great Big Wheel' - first broadcast on Friday 22nd December 1972 at 8.30pm. In this episode the Platoon is chosen for special duties (peeling potatoes, digging trenches, etc) during the test of a secret weapon (The Big Wheel), which runs amok. The Brough Superior is borrowed from a gardener by Private Walker and used by the Warden, Captain Mainwaring, and Private Pike to lure The Big Wheel into a trap to deactivate it, with Lance Corporal Jones hanging upside down over a bridge with the gardener's shears to chop off its aerial!

The bike’s TV career didn’t end there, as it later went on to become a mainstay of the 1976-79 comedy ‘George and Mildred’, serving as George’s bike and appearing in the opening sequence of each episode.

Bonhams says the bike now requires some work before it will be ready for road use again, having been an exhibit at the London Motorcycle Museum for many years. But if you’ve got any dreams of getting it for anything like that £40 it changed hands for in the 1960s, think again: Bonhams estimates it will take between £60,000 and £80,000 at the auction on 27-28 April. More details here.