Skoda gets on the electric bike bandwagon 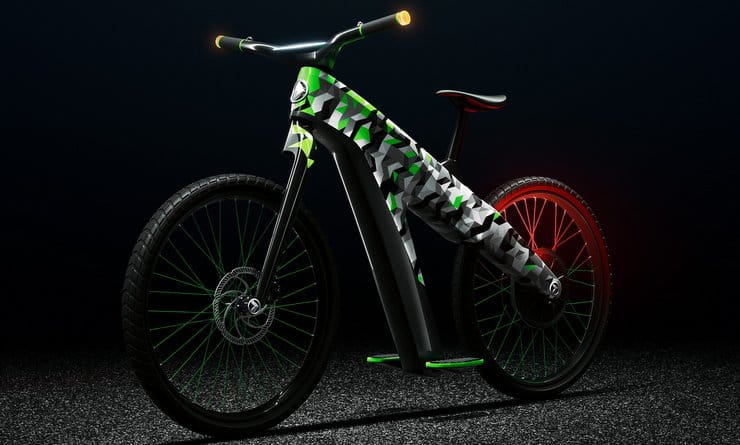 Car firm Skoda has used the Geneva Motor Show to unveil this battery-powered concept bike that’s aimed at attracting the sort of customer that would traditionally have bought a 50cc moped.

The Klement is just a concept at the moment, but it illustrates how car firms are looking to expand to become wider-reaching transport companies, particularly as electric power starts to replace traditional petrol engines.

A 45km/h (28mph) top speed means the bike would be classed as moped under UK law – so you’d need a licence, insurance and registration to ride it. Normal electrically-assisted bicycles are restricted to 25km/h or 15mph. In some European countries there’s a separate S-Pedelec category allowing 45km/h electrics to be ridden without insurance or a licence plate, but you still need a licence. Basically, it’s a minefield, but it’s one that we’re going to have to learn to navigate as machines like this become increasingly common.

On the tech front, Skoda’s concept is interesting for an innovative control layout that’s derived from the techniques used to operate so-called ‘hoverboards’. Instead of a twistgrip throttle and finger-operated brake levers, the rider uses two footboards. Tilt your toes downwards and the bike goes forwards, while reversing the movement applies the brakes – the rear reverses the motor torque, while the front is an ABS-equipped hydraulic disc brake.

Although only a concept at the moment, the firm hints at a production future for the idea. Guido Haak, Head of Product Management at Skoda, said: “Micromobility is becoming increasingly important in cities. By presenting the Klement at the Geneva Motor Show, we are showcasing our vision for the future of micromobility: sustainable, innovative, electric and with a pure, modern design. The Klement is a state-of-the-art, dynamic and easy-to-use vehicle, and allows the Skoda brand to further appeal to a younger target group with a heightened sense of environmental awareness. The concept is perfectly aligned with our customers and our eMobility Strategy. We are therefore assessing whether, and how, this exciting, new mobility concept can be added to our portfolio in the future.”

Power comes from a 4kW (5.4hp) hub-mounted motor, with regenerative braking, and two li-ion batteries with a total capacity of 1250Wh, giving a 62km range. The batteries are removable for recharging indoors on a normal plug socket. The whole bike weighs only 25kg. LED lighting includes an almost invisible headlight that’s part of the bars, bar-end indicators and a tail/brake light mounted in the frame near the rear wheel.

The firm bolstered the idea of a production version by explaining that it’s planning optional extras including mousse-filled tyres, and as is now the norm it’s making smartphones integral to them bike’s technology, even allowing the bike to be geo-fenced to restrict areas where it can be used.

Although Skoda doesn’t mention any connection with the firm, it’s worth bearing in mind that it’s a sister company of Ducati. Both are part of the wider Volkswagen Group, and Ducati is expected to reveal its first all-electric bike in the near future.