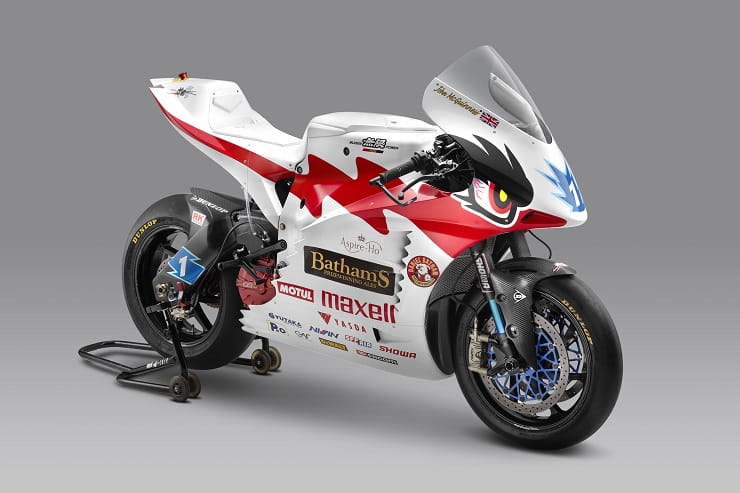 Mugen has been untouchable at the TT Zero for half a decade now, winning five races on the trot and accounting for a full half of all the wins at the electric TT race since it started in 2009.

This is the firm’s 2019 challenger, the Shinden Hachi, is the eighth electric race bike to come from the Mugen stable (Hachi means ‘eight’), and it looks like the pace of development is slowing down as it’s nearly identical to last year’s Shinden Nana. In fact, large chunks of the bike including them carbon monocoque chassis and the swingarm don’t appear to have been altered since the appearance of the Shinden Go back in 2016. That’s a hint that Mugen (and Honda, which is the hidden hand behind the project) has found a solution approaching ideal.

The new bike’s physical dimensions are identical to Mugen’s last three Shindens, the 2018 Nana, 2017 Roku and 2016 Go, including the 248kg weight, and Mugen still claims the same peak power – 163.2hp – from the oil-cooled, three-phase, brushless electric motor that powers the bike. However, any officially-announced race bike specifications need to be taken with a large bucket of salt; no team wants to give away its true potential, and this year’s Shiden is sure to be faster than its predecessors.

The main developments that can be seen in the 2019 bike are tweaks around the nose styling, which loses last year’s central air intake for two smaller ones on each side. There are also small tweaks to the side bodywork and the tail.

This year, Mugen’s riders will be 2018 TT Zero winner Michael Rutter and 2014 and 2015 winner John McGuinness.