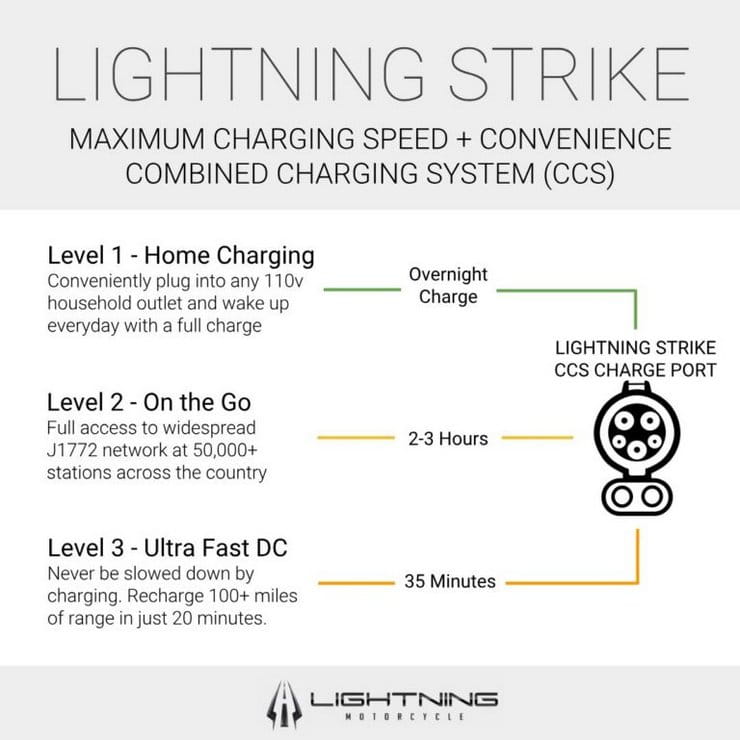 The forthcoming Lightning Strike electric sports bike is set to be officially unveiled later this month and the American firm has now revealed that it’s charging times are just as impressive as its claimed performance figures.

Lightning previously announced that the Strike will be able to do 150 miles on a full battery, with a top speed of 150mph and a starting price of $12,998 (£10,000). Those numbers already put it in a different league compared to existing electric offerings, although it’s worth noting that there’s no guarantee that the entry-level, £10k model will be capable of the headline-making performance and range figures.

Now Lightning has added a bit more flesh to the bone when it comes to charging times. The firm’s latest information is that the Strike will be able to use three charging systems. From a standard US plug socket it’s claimed to be able to reach a full charge ‘overnight’. In the UK, where our electricity operates at 240V rather than the USA’s 110V, home charging may well be faster. Lightning also says that when using a “J1772” Level 2 charger the charge time drops to 2-3 hours, and using a Level 3 DC charger it can take as little as 35 minutes for a full charge, or 20 minutes to add 100 miles of range. That’s still not quite on a par with filling a petrol tank when it comes to convenience on long trips, but the ability to wake up to a full ‘tank’ every morning rather than making regular trips to the petrol station is something that no petrol bike can aspire to.

From those charge time figures, it seems likely that the Strike will use a battery of around 15-20kWh capacity. That’s bigger than most electric offerings, but on a par with the options already available on the much more expensive Lightning LS-218, which is offered with 12kWh, 15kWh or 20kWh packs depending on your budget. However, the LS-218 costs $38,888 in its smallest-battery form, rising to $46,888 if you want the full 20kWh version, so the Strike will be vastly cheaper to buy.