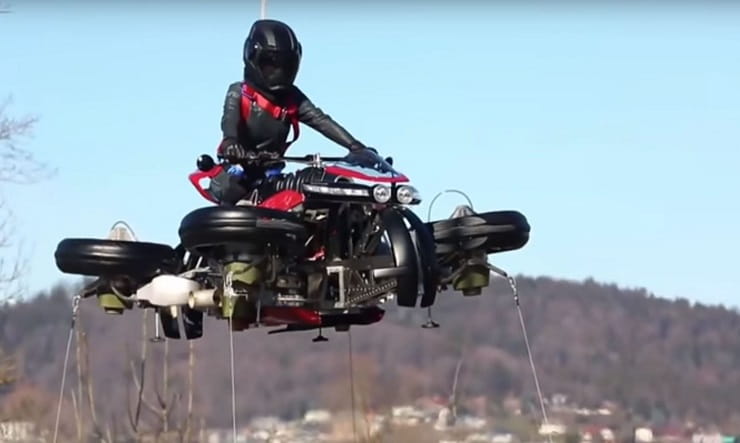 Flying motorcycles are right up there with robot butlers and Mars colonies in the big book of Tomorrow’s World predictions that are always ‘just a few years away’. But Ludovic Lazareth – purveyor of crazy bikes to the super-rich via his eponymous firm – has actually got as far as demonstrating his.

Lazareth first revealed the machine, called the LMV 496, last year, but now the firm has released this video of the prototype undergoing flight tests. It’s clearly tethered for the sake of safety, but it appears to be reasonably stable in flight.

The bike is designed to look like the existing Lazareth LM 847, a leaning four-wheeled creation that uses a Maserati V8 for power and is being made in a limited run of 10. Each of those machines costs around €200,000 and Lazareth has already sold the first five. However the LMV 496 is quite different.

For a start, the ‘V8 engine’ on the flying bike is a dummy unit; when you ride the LMV 496 on the road, it’s actually an electric bike. And in the air, it’s powered by kerosene feeding four JetCat jet turbines, one mounted on each wheel. To convert to airborne mode, it’s a case of putting down two centre-stands, lifting all four wheels off the ground, and pressing a button that starts a balletic process that electrically moves the wheels into their horizontal positions. Remember the flying Delorean in Back to the Future II? It’s basically like that.

Once in the air, the whole thing operates on the same principle as a radio-controlled drone, and will theoretically be just as simple to operate. But with the rider perched on top, the stakes are considerably higher when you smash it into the first nearby tree. And with the equivalent of 1500hp from those four jets and an 800°C exhaust plume, you probably don’t want to make any low passes over friends and family.

Lazareth originally intended to do a live demonstration of the bike in front of an audience back in January, but a failure in the propulsion system meant that it only managed to rise a few centimetres from the ground.