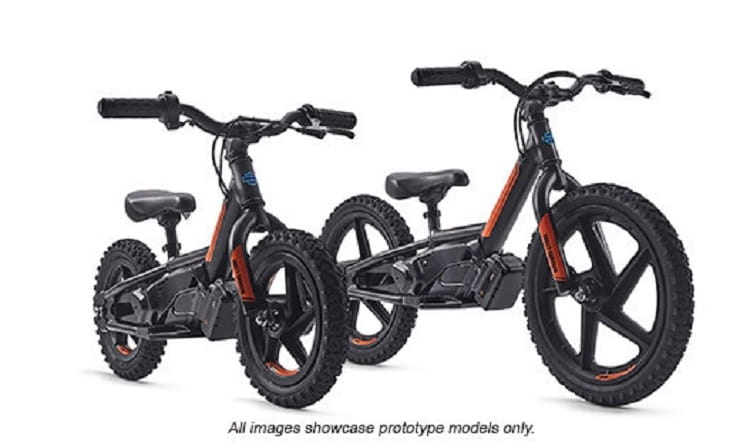 The overbearing problem that Harley-Davidson has struggled with over the last few years is an ageing customer base. While the introduction of trike models has helped keep buyers coming even once they’re too decrepit for a conventional bike, the firm knows it needs younger customers.

The electric LiveWire is one solution, although its near-$30,000 price means millennials aren’t going to flock to it, and the introduction of smaller 500cc and 750cc twins also helps, but now Harley has bought kids’ bike maker StaCyc to get its talons into even younger riders.

StaCyc’s eDrive models – available in 12in and 16in wheel sizes – are aimed at riders from as young as three years old. They’re basically electrically-assisted balance bikes, able to power themselves at speeds of 5mph, 7mph or 9mph depending on mode. A 20V li-ion battery, similar to the sort that might run a cordless drill, provides power, giving a 30-60 minute run time. In America, the 12in version is $649 and the 16in model is $699.

Harley-Davidson announced the purchase at the Geneva Motor Show, where it also revealed Harley-branded versions of both StaCyc models (pictured).

Harley-Davidson Senior Vice President of Marketing and Brand Heather Malenshek said: “The StaCyc team shares the same vision we have for building the next generation of riders globally and we believe that together, we will have a significant impact in bringing the fun and enjoyment of riding to kids everywhere.”

Harley’s first electric bike, the LiveWire, goes on sale later this year, and the firm plans to introduce further lightweight and middleweight electric bikes across a range of prices in 2021. In the meantime, the rebranded StaCyc kids bikes are set to be sold via ‘selected’ Harley-Davidson dealers from later this year. There’s no word on UK availability yet, and the firm says that the existing StaCyc-badged versions of the bike will also remain on sale.

Ryan Ragland, Founder of StaCyc, said: “The opportunity to work with the team at Harley-Davidson and have the support to carry out our mission to create the next generation of riders is exciting. Together we're building a plan that fast-tracks our ability to help the industry create as many riders as possible.”