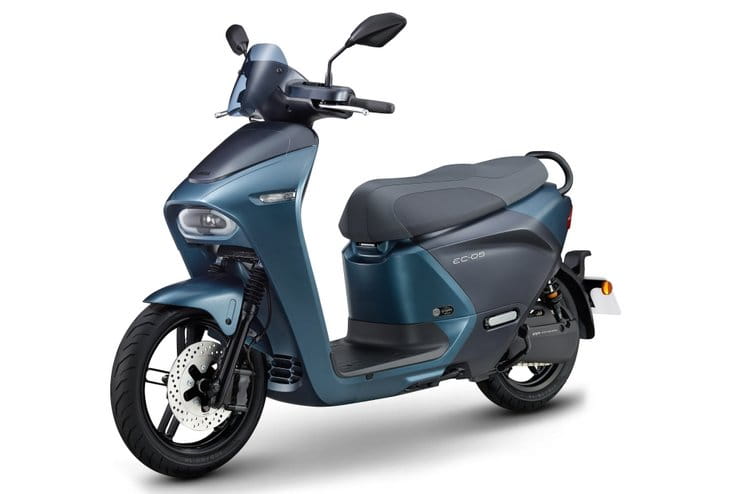 Yamaha has been playing the electric bike game for well over 15 years now and while we’re still waiting to see a proper e-motorcycle to rival the likes of Zero it’s just launched a battery-swappable scooter on the Taiwanese market.

If the new EC-05 looks at all familiar, it’s because all the mechanical bits – the electrics, the wheels, suspension, motor and brakes – come from Gogoro’s Smartscooter. It’s part of a collaboration between the firms, and importantly it means the EC-05 will be able to use Gogoro’s existing network of 1251 ‘GoStation’ battery-swap facilities around Taiwan.

The GoStations are the key to eliminating the main concern that prevents a lot of people from going electric: charging. On most electric bikes charging is a slow process and if you park on the street there’s little chance to plug in. With two swappable batteries, the Gogoro/Yamaha EC-05 can be replenished in as little as 6 seconds by simply sliding out the spent batteries and replacing them – for a fee – with charged ones that are waiting at a GoStation. Suddenly, refuelling is actually quicker, cleaner and easier than it would be on a conventional petrol-powered scooter.

Of course, Honda has the same idea with its PCX Electric.

Performance-wise, the Yamaha should match the Gogoro, with around 10hp on tap, a 60mph top speed and a range of up to around 90 miles.

Yamaha’s electric scooter history goes back to 2002, when it launched the Passol. Since then, the EC-02, EC-03 and E-Vino have represented the firm in the electric bike market, but at the moment the EC-05 is limited to the Taiwanese market where it can take advantage of the GoStation network.

In Taiwan, the bike’s price is equivalent to around £2500, but there’s no word on whether it will ever come to the European market.