While other firms go to extraordinary lengths to hide their prototypes from prying eyes KTM seems happy to parade even its roughest test mules before the lenses of spy photographers. And this is clearly a very early test mule exploring the idea of making a supermoto-style bike based on the firm’s 790 LC8c parallel twin engine.

This prototype appears to be a proof-of-concept testbed, made as quickly and cheaply as possible to test some of the most basic parameters of an upcoming model. Virtually every component has been borrowed from the firm’s existing range and the riding position has been crudely adapted, but it’s clear that KTM’s intention is to see how well its latest parallel twin works in the context of a supermoto. If such a bike reaches production, it’s likely to go under the ‘790 SMC’ name, either as an accompaniment to or a replacement for the existing 690 SMC R single.

Let’s start with what we can see on the prototype. The engine is clearly the LC8c twin, as used in the 790 Duke and 790 Adventure, which means it’s making 94hp and 65lbft of torque – a significant hike compared to the 690 SMC R’s 74hp and 54lbft. That motor is mounted in the same chassis used by the 790 Adventure and Duke, with the suspension and brakes from the higher-spec 790 Adventure R. Those are 48mm WP USD forks, with KTM-branded radial calipers, and the same externally braced swingarm used on all the existing 790 models, connected via a WP-PDS monoshock. 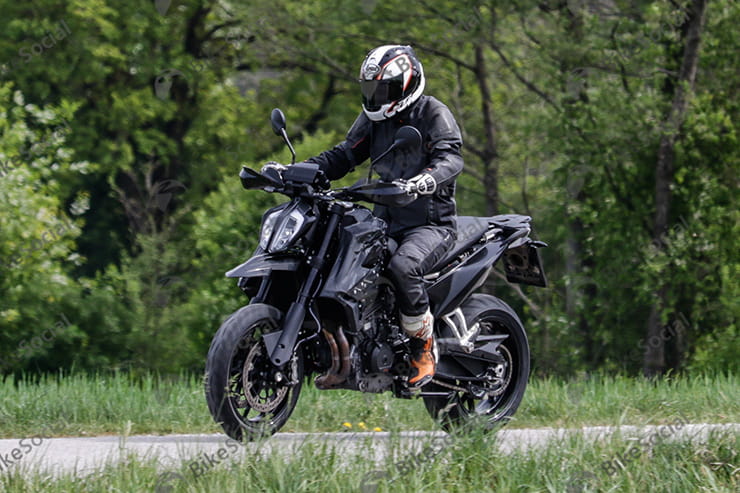 Most of the bodywork is also borrowed from the existing 790 range. The side panels and tail come from the 790 Adventure, which also lends its exhaust to this prototype, while the headlight seems to be the same unit used on the 790 Duke. The front mudguard, meanwhile, is taken from the 690 SMC R.

The wheels and their road-oriented rubber are from the 790 Duke, but the bars appear to be identical to those on the 790 Adventure.

There’s clearly been some garden shed level engineering employed in the fuel tank area; it’s wrapped in duct tape and doesn’t appear to fit well. That’s because the 790 Duke’s tank won’t allow a suitably flat, supermoto-style seat and the 790 Adventure’s unusual fuel storage solution – which includes tanks in low-slung side panels – wouldn’t fit with the supermoto look. The seat clearly comes from another KTM, bearing the firm’s badge on its side, but it’s clearly not intended to fit on this bike. A couple of inches of clear air underneath it show that the firm has raised the whole seat on blocks to create the right riding position.

The footpegs are also revised, and appear to be mounted higher than on the 790 Adventure or Duke.

Overall the impression is that this bike could have been knocked together over the course of a few days, and that’s probably exactly how it was created. But that doesn’t make it any less important; if the tests it’s undergoing in these pictures are classed as a success then KTM is likely to pursue the idea further, developing it into a production supermoto.

That’s clearly going to take a lot of time. As such it’s unlikely that we’ll see a 790 SMC in KTM’s 2020 range. Instead it’s more likely that if it gets the green light it’s going to reach showrooms in 2021 at the earliest.