This is what a Facebook-designed robot motorcycle looks like 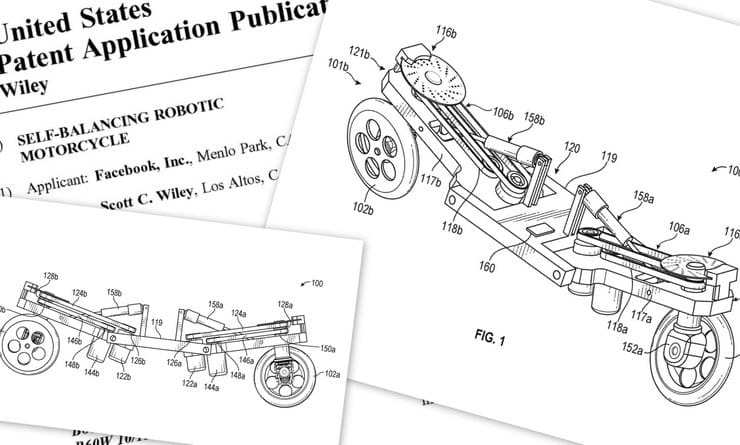 Facebook seems to be involved in most aspects of 21st century life but it doesn’t seem to be the sort of company that would be trying to design a motorcycle. So when we spotted a new patent application titled “Self-Balancing Robotic Motorcycle” and filed by the Californian social media giant, we had to take a look.

As you can probably guess, the idea described within isn’t something that’s aiming to take on Honda or Harley-Davidson.

But Facebook’s robot bike is actually a pretty interesting idea, even if it’s not a motorcycle quite as we might know it. As you can see in the illustration, it’s electric, but it’s also two-wheel-drive and two-wheel-steer.

The bike is made around two identical swingarms mounted on a small central frame. Each swingarm carries two electric motors, mounted vertically. The inner motor drives the wheel via a belt to a vertical shaft running down to a bevel gear which translates the rotation by 90 degrees. A disc brake is mounted horizontally at the top of the vertical drive shaft. The second motor also drives a belt that makes its way to the drive shaft, but its job is to operate the steering, rotating the drive shaft’s outer sleeve to turn the castor-style wheel.

Each swingarm has a straightforward suspension linkage, while the bike’s frame is nothing more than an H-shaped piece of metal, or possibly even plastic, to hold the swingarms together and provide a mounting point for the batteries and the control unit.

Because the both wheels can be steered through 360 degrees and driven in both directions, that control unit can – with the help of various sensors – balance the whole caboodle on its wheels, even when stationary. What’s more, by turning both wheels 90 degrees to the normal direction of travel, the bike can move sideways, like a hoverboard. In fact, it could move in any direction without turning around, or keep moving in one direction while changing its orientation.

So, what’s it for? The patent application isn’t too clear about that, saying it “can have a multitude of applications”, including unmanned uses, but it does appear to have ideas of making it the basis for a form of personal transportation, saying that the bike could, “when integrated within a motorcycle design, provide an improved (and potentially autonomous) form of transportation for humans.”